Hazel Cho is perched on the edge of the couch, staring intently at the computer screen while twirling a strand of hair. It’s her school’s morning Zoom meeting, and she’s patiently waiting for her turn to speak. When the teacher finally calls on her, the four year-old takes a long breath and lets her news gush out.

“I found beautiful pebbles in the backyard, and I want to save them and wash them and have them for Cottage,” the girl exclaims.

At Cottage Co-op Nursery School, a preschool in Pasadena, the Zoom meeting is just one way the school is keeping their students connected to each other in the time of coronavirus lockdown. Yet it’s a huge departure from a fundamental principle the school used to adhere to, according to director Jocelyn Robertson.

“So at our school, we had no screens whatsoever,” Robertson said.

Now, not only do the children gather on Zoom once a day, the teachers Facetime with them, and there’s a YouTube channel that Robertson created where she reads stories.

In years past, parents were warned to limit screen time for healthy early development. That’s one of the primary reasons Cottage Co-op Nursery School did not utilize any screens or technology for children. Play has always been the main focus of  the preschool.

“You get just about everything you need just from playing when you're a young child,” Robertson said. “Playing in the world, you move your body through space; you make creative choices. You might enlist other people and negotiate the terms of it.”

Interacting with the world may foster cognitive development, but with fear of coronavirus high and kids staying home, many preschools have embraced technology.  According to Robertson, having children see and talk to their teachers is important — and it can offer a break for parents.

“The thing people are coming to me about is just being absolutely driven crazy by being home with their three-year-old,” Robertson said. 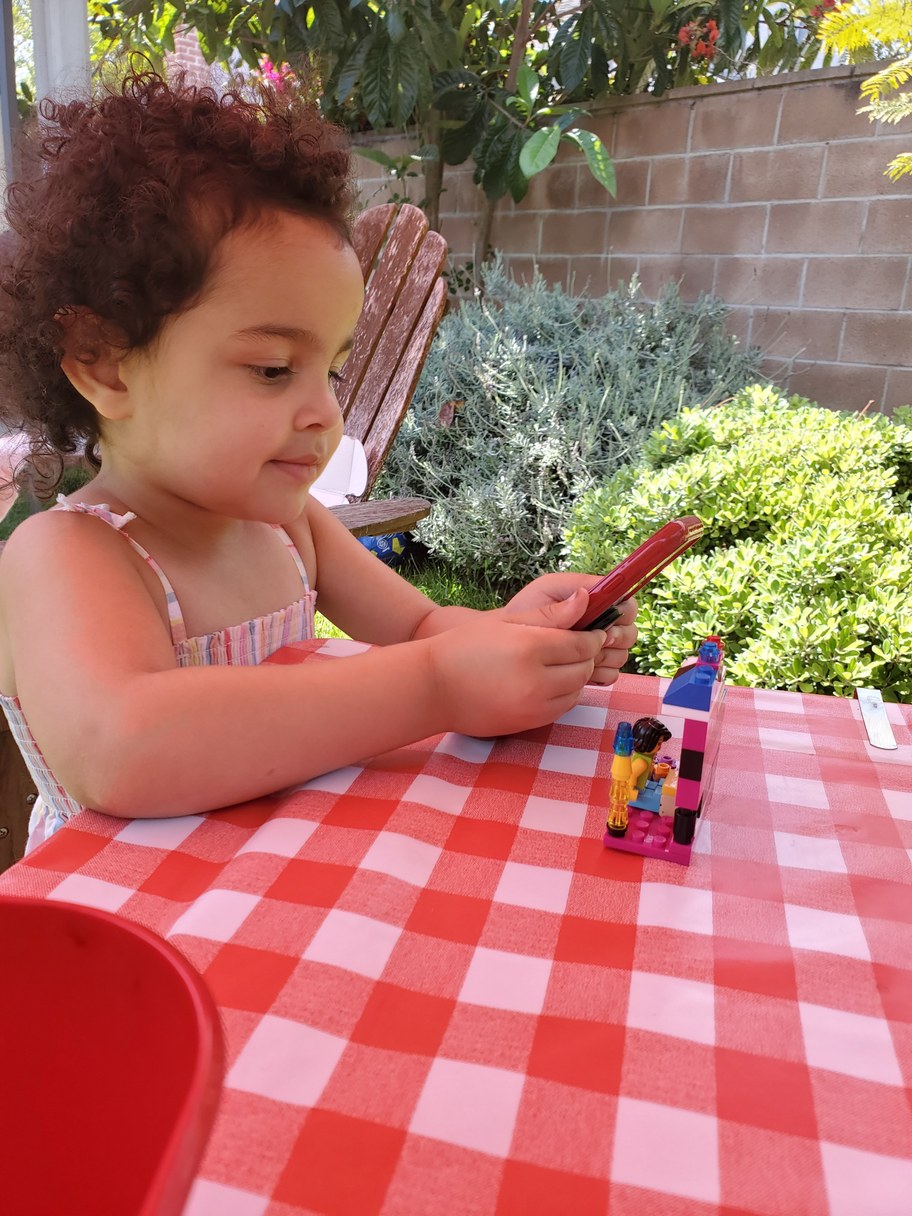 Alice Aurelia Grant, 3, never watched screens before the pandemic hit. Now, her mother worries she is getting too much time as the family juggles work and school. Photo Credit: Halina Newberry Grant

When parents are working, the easiest solution is usually sitting a child in front of a screen. It’s become the new normal for Culver City mom, Halina Newberry Grant who has a very busy 3 year-old, Alice.

“Prior to quarantine, she had never touched a screen, with the exception of maybe flipping through pictures on one of our phones,” Grant said.

Grant and her husband are both working from home now, alongside daughters Alice and Azora, 7, who is doing her school work digitally.

Watching Disney movies is one of the few things to get Alice to sit quietly and allow her mom to participate in a meeting. Grant has reluctantly accepted “Frozen” and “Frozen II” as her new babysitters.

“She's under three, really no good can come from any type of screen time, but we have to just roll with it,” Grant said.

As she balances work responsibilities and childcare duties, Grant worries about Alice.

“I do kind of feel like she's gone into a phase of arrested development because of how much sudden screen time she has; it’s passive and she’s like a zombie,” Grant said.

She’s not alone in her concerns that too much screen time is doing damage. Yet, it may not be so bad, according to developmental pediatrician, Dr. Jenny Radesky.

“Kids are often very still and very quiet when they're watching screen media, but that isn't a direct toxic effect,” Radesky said.

Radesky authored the American Academy of Pediatrics 2016 guidelines on screen time for kids. She says Disney is fine but warns parents should avoid violent content or excessive time on video games.

“There’s been a few studies suggesting immediately after that a young child might have a harder time focusing or organizing their thoughts,” Radesky said. “The executive functionings might be a little bit weaker.”

General screen time for children isn't harmful, per se, Radesky said; the developmental loss comes from what the child doesn’t get because of the time spent with a screen. 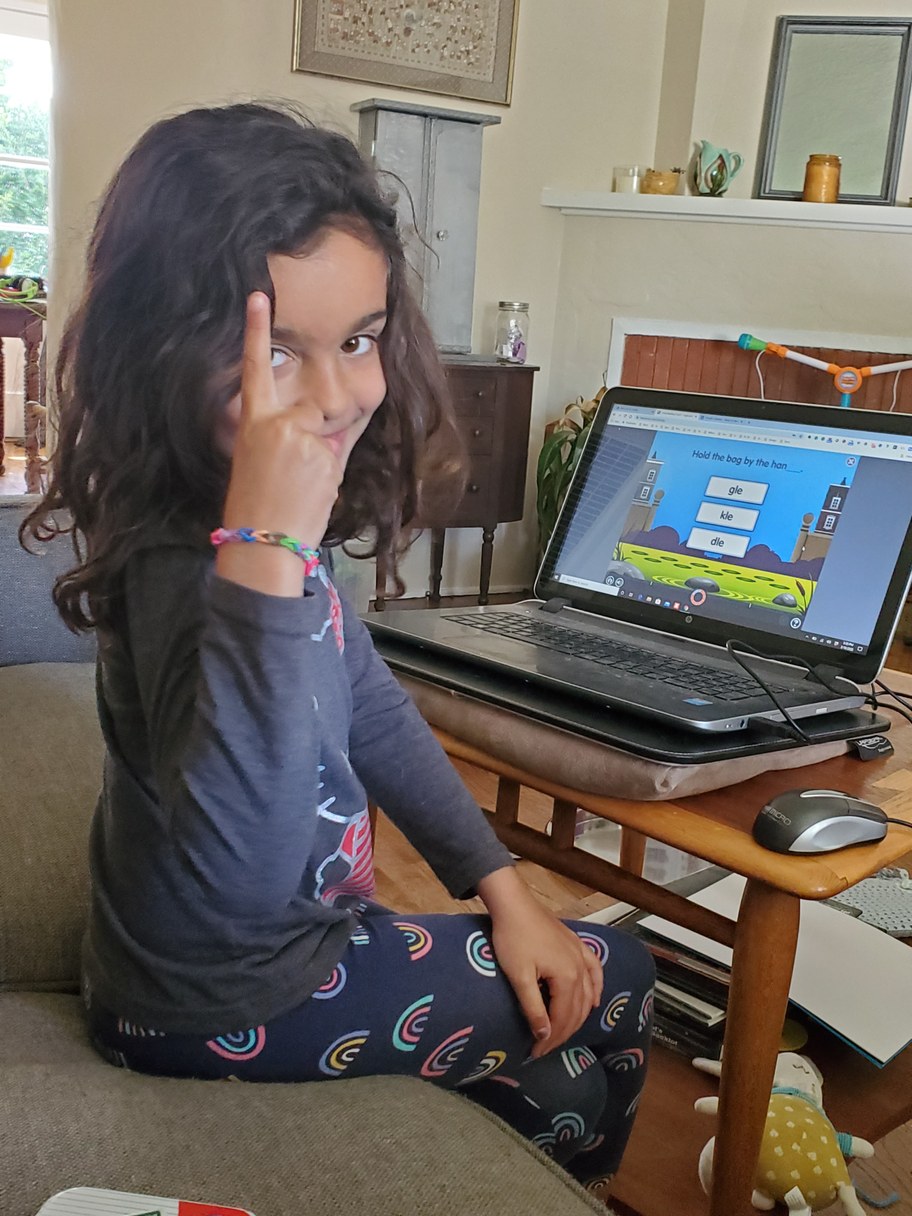 Azora James Grant is in first grade. She does her school work on a computer with her parents helping her since schools closed down. Photo credit: Halina Newberry Grant

“We think any hour [a child is] spending watching TV or videos or YouTube is an hour you're not spending exploring the world with your own hands and putting things in your mouth, listening to words your parents are speaking to you,” the pediatrician said.

Yet Dr. Radesky is clear that in these current times, parents should not consider it screen time when their kids are doing school work on computers, or video chatting with friends or grandma.

“When you do something, the person on the other side of the screen does something back, and that's much more meaningful for infants and toddlers,” she said.

The silver lining to all this may be more resilience, according to child psychologist Dr. Joe Dilley, author of The Game Is Playing Your Kid: How to Unplug and Reconnect in the Digital Age

“No matter what we do and how much we try to protect our kids, they're going to encounter challenges [and] rough patches,” Dilley said. “Certainly kids are going to feel lonely and some of them are going to not know quite how to express that, especially because they're not necessarily certain that that's what's going on.”

Loneliness could manifest as moodiness, or even temper tantrums. Parents can help kids, Dr Dilley said, rather than punish them for acting out.

Even though parents try to protect their children from hardships, they are the building blocks of resilience. Dilley points to the stay-at-home orders.

“It is adversity because this is novel and unpleasant and it was not asked for,” Dilley said. “It really throws us off balance, especially when we're kids and we have less of a paradigm, less of a frame of reference for what's going on.”

He recommends talking to kids about their feelings in these strange times.“When we feel like our kids are experiencing some anxiety or some depression, the idea would be not so much to fix it as much as to hear it, respond to it, and model for them how to sit with it,” Dilley said.

The surgeon general of California has created a guide to recognizing and managing stress for parents and children.

Deepa Fernandes is a reporting fellow at Pacific Oaks College, which is funded in part by First 5 LA.

Hazel Cho is perched on the edge of the couch, staring intently at the computer screen while twirling a strand of hair. It’s her school’s morning Zoom meeting, and she’s...

As public health officials gradually lift some of the restrictions keeping people hunkered down at their homes, that could mean a boost to the economy – and your worries.

Sheltering at home offers an unexpected opportunity for nightly news watchers. As news personalities and commentators broadcast from their residences, audiences have...