The California Restaurant Association estimates up to a third of restaurants in the state may close permanently. Photo by Karen Foshay.

In LA, bars are still ordered closed, and restaurants are under constantly changing rules. Food service jobs nationwide are down 2.5 million since February, according to the U.S. Bureau of Labor Statistics. In Southern California, it’s been devastating for 590,000 cooks, dishwashers, and busboys. They’re typically immigrants — sometimes undocumented — and essential to the local economy. COVID-19 has exposed how few safety nets exist for this labor pool.

Manuel Villanueva is a labor organizer with the nonprofit Restaurant Opportunities Center. Since the pandemic began, he has been a lifeline for dozens of unemployed workers. From his apartment in Highland Park, he fields calls 24/7 from out-of-work cooks, dishwashers, and bar hands who don’t have anyone else to turn to. 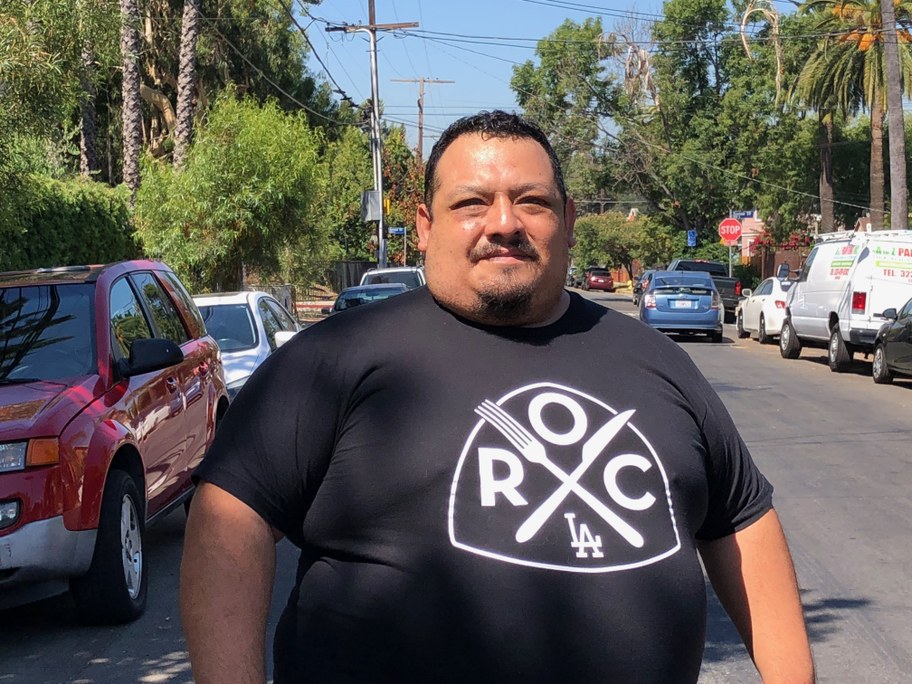 The calls became increasingly desperate as the countywide shutdown turned from weeks to months. One of those calls was from Antonio Rodriguez, who lost his job as a sushi chef at one of LA’s high-end restaurants.

“He said, ‘Listen, I'm alone in my apartment, and all I have in my stomach is food that I got from a dumpster at a McDonald's close by. And I don't have any water. I've been drinking water out of the reserve from the toilet.’ And It was really hard to hear that,” Villanueva says. 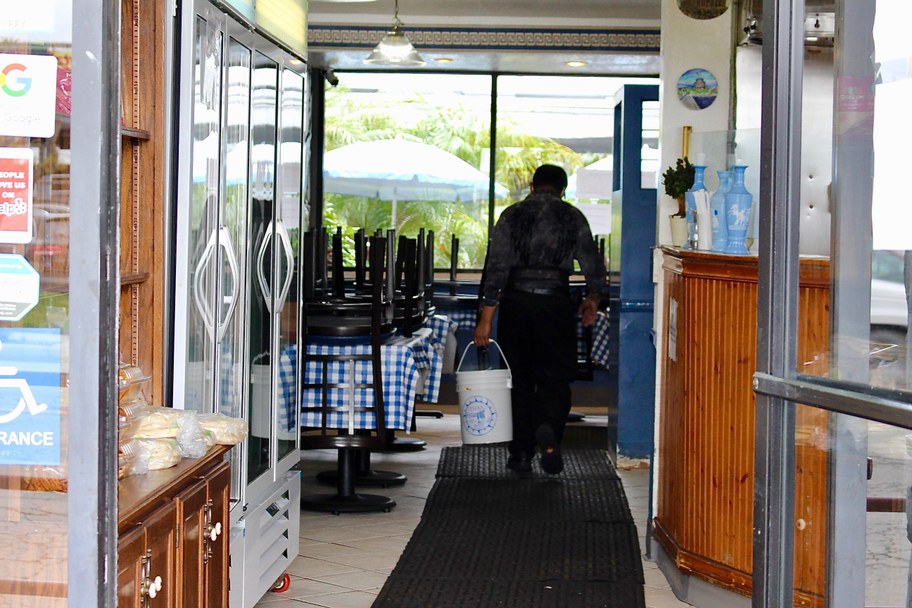 A dishwasher at Aliki’s Greek Tavern. The restaurant hasn’t been able to hire back all of its workers. Photo by Karen Foshay.

Undocumented workers are not eligible for federal COVID-19 related assistance, including employment insurance. In May, California provided one-time assistance of $500 to undocumented adults. However, the $75 million in total disaster aid was not nearly enough to help the state’s 2 million people who qualified for it.

“The communities of immigrants are on their own,” Villanueva says. He buys groceries for workers and takes them to the hospital for medical care, actions that are potentially dangerous. A health condition puts Villanueva at high risk for the coronavirus. He recently recorded a video will for his family. 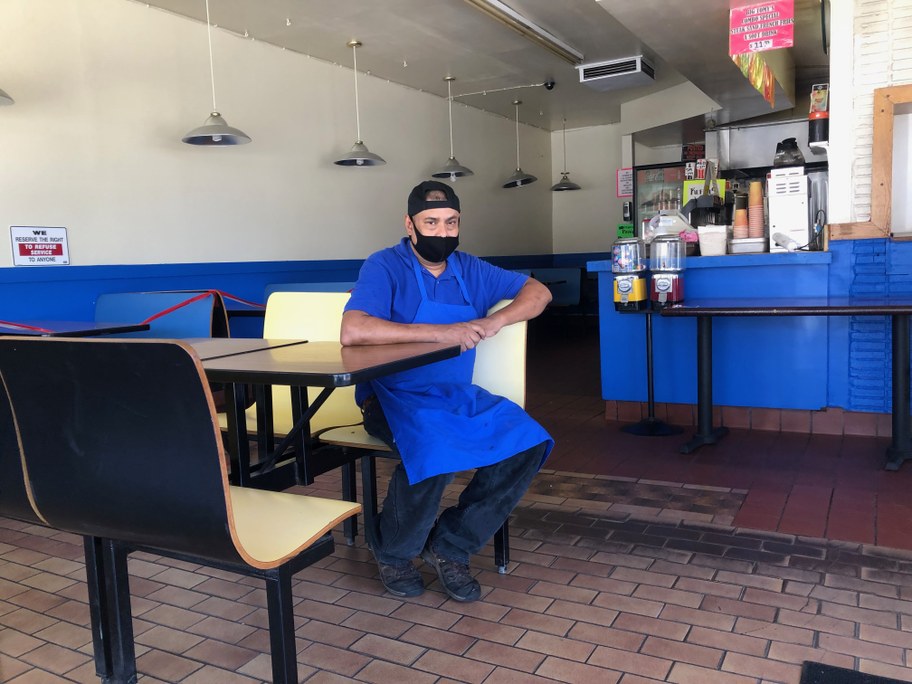 A cook sits among the empty tables at Big Tommy’s burgers in Culver City. Photo by Karen Foshay.

As the pandemic’s economic devastation stretches into six months, there is growing concern about how many of LA’s restaurants — and the jobs they create — will survive. The California Restaurant Association estimates 30% of the state’s restaurants may not reopen. According to the  Q2 2020 Yelp Economic Average Report, Los Angeles led other major cities in permanent restaurant closures with 5,600 between March and July.

Mayor Garcetti announced last week that the area’s restaurants and other small businesses can apply for $100 million in new federal relief funding. A proposal to make al fresco dining permanent is also being considered by the LA City Council. On a national level, a bill to assist restaurants is stalled in Congress.

Villanueva’s cell phone hasn’t stopped ringing and the pleas for help continue. It’s taken a toll on the organizer, who says he suffers from panic attacks a few times a week. His hope is that something will be done to strengthen labor protections and provide safety nets for those who are the most vulnerable. 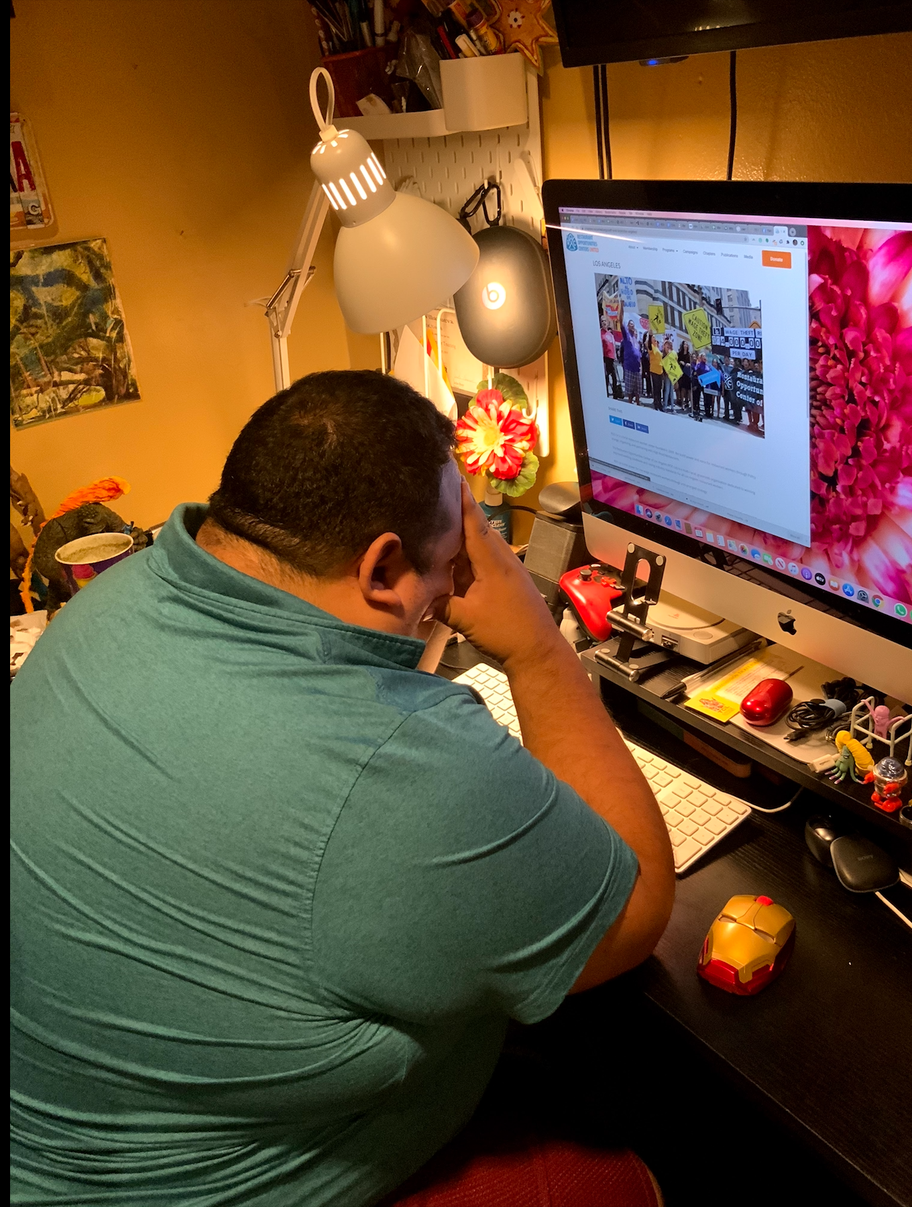 From his home office Villanueva fields calls from unemployed restaurant workers. The stress is taking a toll on him physically and mentally. Photo courtesy of Manuel Villanueva.

Looking for support? Here are organizations offering assistance to the food service industry:

The lifeline for food service workers during the pandemic

Food service jobs nationwide are down 2.5 million since February, according to the U.S. Bureau of Labor Statistics. In Southern California, it’s been devastating for the...

With a heat wave and wildfires, inhaling a ‘toxic soup’ can harm people’s lungs

With fires burning throughout California and smoky/hazy conditions casting orange glows over LA and San Francisco, people may be wondering whether the air they’re breathing...