The early days of LAX: 'Your nails had to be polished to the same color as your lipstick'

Hosted by Steve Chiotakis May. 15, 2019 Transportation “If you raised your arms up to go into the overhead bin, your whole dress is coming up,” former flight attendant Carolyn Wood told Greater LA, reflecting on what it was like to work in the early days of LAX. “We had nicknames for the uniforms. One was the crotch grabber.”

As the longest-working employee at LAX, Ethel Pattison also recalled a different time, when girls could chase the Beatles screaming through the terminal, and the airport was only two stories high.  “We didn’t have any steel yet from the war, due to the war. So they could only make it two stories high.”

Both women talked to Greater LA about what they’ve seen during LAX’s storied history. 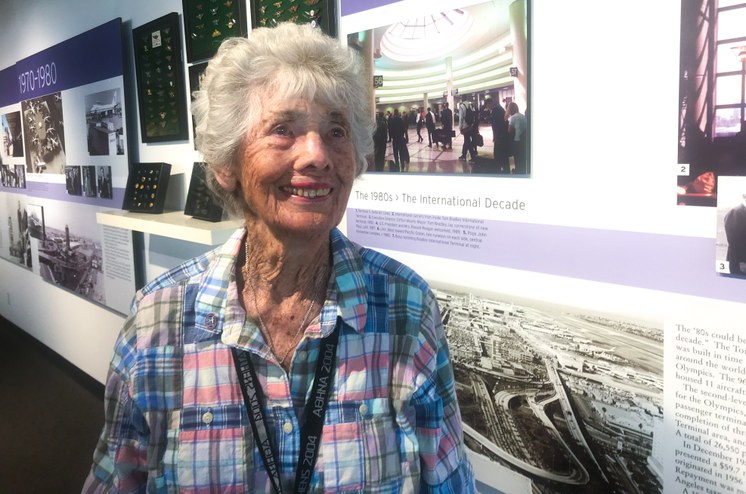 “The story was that an aide to Mr. Patterson, the president of United, came up and said, ‘Wouldn’t it be a good idea to have women on board? Nurses on board. It may ease the passengers’ feelings and make them feel more comfortable.’ And Mr. Patterson didn’t think much about it and went home and told his wife that someone had said that and she said, ‘That’s a good idea, Bill! Why don’t you do that?’ So they did. And they hired the nurses. Nurses then went to World War II, 1941. So then they hired college graduates. If you were to be married, then you had to resign. Some would have two telephone lines so you would think they weren’t living together, but they were.” - Ethel Pattison 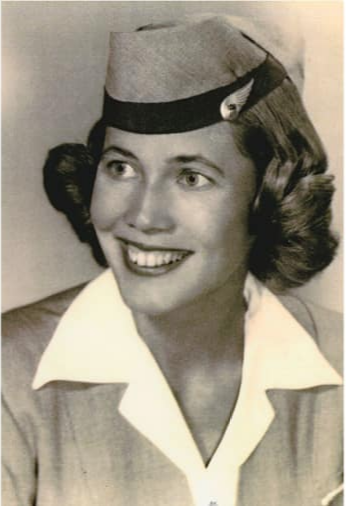 On fashion and sexism in the air

“One man told me I had masculine tendencies because I was away from home. Your nails had to be polished to the same color as your lipstick and you could only wear a certain amount of makeup. You had to have stockings with seams up the back. They had to be straight. Then you had your spectators, which always had to be polished. Three-inch heels. We had nicknames for the uniforms. One was a cheerleader uniform. The other one was the crotch grabber. Oh, the Wonder Bread uniform, because the blouses all looked like Wonder Bread. When they started with the Jean Louis uniform, which everybody loves, with the cappy hat, it was very attractive, but it was not practical because that’s where the skirts were really short. If you raised your arms up to go into the overhead bin, your whole dress is coming up. When I was in training they would ask you what would you do if a guy pinched you? Well, you were supposed to just dismiss it.” - Carolyn Wood

On flying in the pre-digital age

“We got to talk to people. Playing cards, I had playing cards that are so — I still have ‘em at home. They’re so broken down and dirty because that’s what we did. We played cards with passengers, so we could entertain them. But then, when everybody got their laptops and their electronic devices, you didn’t get a chance to talk to the people and that kind of, it’s really changed. It was more fun when you could talk to the people.” - Carolyn Wood

When the Beatles came through LAX

“They were so excited, the girls, that they just couldn’t contain themselves.” - Ethel Pattison

On flying Vietnam troops and refugees

“We all had military charters to and from Vietnam. We had a contract. And we took the troops in and we brought them. Like that ‘Good Morning, Vietnam’ movie? The last scene in that is of a United airplane taking them out. They were somber going over. Some of the girls would give ‘em all the pop we had. I got the guys coming and going and seeing how they got treated and that bothered me. It still bothers me to this day. You know, now they have this ‘thank you for your service’ thing and it just bothers me because when I was flying these guys in and out of Vietnam, nobody said ‘thank you for your service.’ In fact, they didn’t want to even think about military. The military was nothing.

And then of course, when the war was over, we started bringing back refugees. And that was really interesting, too, because those people had gone through a lot. They didn’t want to be separated from their families. And we’d get three seats and we’d get the whole family in three seats and we’d try to get them to move and you’d have to get a translator in there to tell them they’d have to sit one to a seat. And they they didn’t want to sit one to a seat. They wanted all to be together. And then they, of course they didn’t know how to use the lavatory. That was a thing. And then our food was so different, they got, it made a lot of people sick. It was sad, really, to see these people and they, they can’t speak the language and everything is foreign to them. We’d get them and they were just, there was nothing. They had nothing, absolutely nothing.” - Carolyn Wood

Short skirts, Beatlemania and $14 billion upgrades: the history and future of LAX

The early days of LAX: 'Your nails had to be polished to the same color as your lipstick'

“If you raised your arms up to go into the overhead bin, your whole dress is coming up,” former flight attendant Carolyn Wood told Greater LA, reflecting on what it was like...

What to expect at the future LAX

There’s a $14 billion renovation going on right now at LAX, and the city is adding a whole new expansion plan on top of that with an eye towards the 2028 Olympics.

What’s the best way to get to LAX?

Getting to LAX, from anywhere in the region, can be a big hassle, and for years there’s been criticism of public transport options. The Metro train stops short, but the...