Why LA is voting on Measure EE, the tax to support LAUSD In January, thousands of Los Angeles Unified School teachers took to the streets to demand higher pay, smaller class sizes and the hiring of thousands of more school nurses, counselors and teachers’ assistants.

After a week of marches and rallies, an agreement was reached between the LA Unified School District and the union representing instructors, with the district promising to meet many of the teachers’ demands.

Now comes the hard part: How to pay for it?

Even before the strike, America’s second largest school system faced growing deficits and forecasts that it could go bankrupt in three years as it spent down its financial reserves.

Measure EE has been proposed to raise money for the district. It creates a special property tax on properties in communities served by the school district.

At a recent Measure EE rally in South Los Angeles, Los Angeles Mayor Eric Garcetti and other local leaders said passing the measure was critical to the future of public education in the city.

“You see, this is a fight for our children,” said Garcetti. “There is nothing more righteous than fighting for the future of this city. And we know that this city begins with the children.”

If passed, Measure EE would would create a 16 cent per square foot parcel tax on both commercial and residential properties in communities served by LA Unified schools.

For example, a business owning a million-square-feet of office or retail space would pay $160,000 annually because of the tax. A homeowner with a 1,500- square-foot-house would pay $240 a year.

It’s expected the parcel tax would raise about $500 million annually for the LAUSD over a 12-year-period.

LAUSD Superintendent Austin Beutner, who has joined forces with United Teachers Los Angeles, the teachers union, says money raised from a parcel tax is necessary to reverse years of declining per-pupil spending in district, compared to other school systems.

“New York City spends $23,000 to educate a child,” said Beutner. We spent $16,000. That’s not enough. We start to close the gap, we can provide every student with the opportunity they deserve.”

“Nothing in the ballot measure guarantees where the money's going to go,” said Stuart Waldman, president of the Valley Industry and Commerce Association, or VICA.

VICA is one one of several Los Angeles business groups that are opposing Measure EE. They argue the money raised by a parcel tax would go to prop up the school district’s rickety finances instead of being spent in the classroom.

They also say that LAUSD squanders money it already has, spending it on outside consultants and employees who have little to do with actual teaching.

“We also think that LAUSD is full of bloat, significant bloat,” said Waldman. “LAUSD needs to make some serious changes before they ask for more money.”

But when asked if the business community has a better alternative to improve LAUSD schools other than a parcel tax, Waldman didn’t have an answer.

“You know, right now the question is should you vote yes for EE or no on EE,” said Waldman, “and that is the only conversation.”

Although businesses are expected to pay more than 70% of the total money raised from a parcel tax, Measure’ EE’s supporters know if the measure is to pass, they have to convince homeowners that paying a higher tax on their properties is a good investment.

To boost voter turnout, volunteers for the Measure EE campaign, many of them teachers, students and community activists, have spent recent days canvassing neighborhoods, knocking on doors, and talking to homeowners about the state of public education. 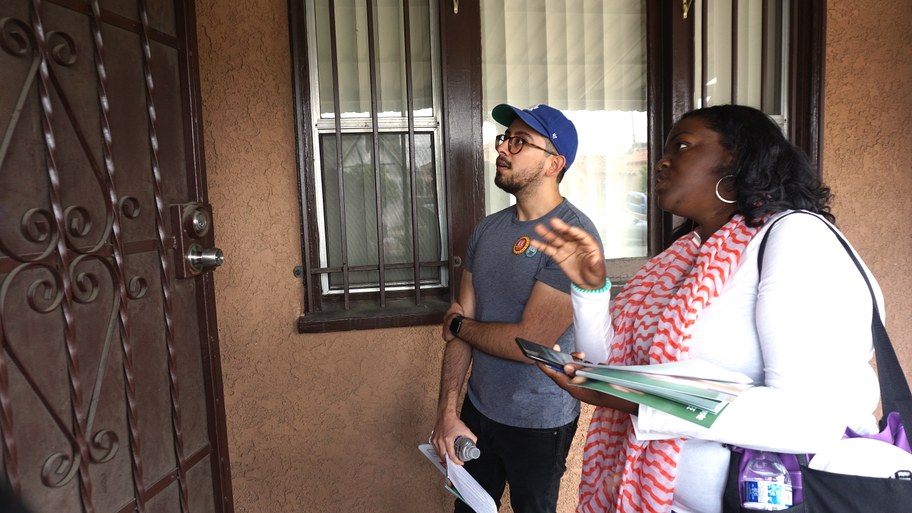 “Everything you said - we need,” Jones told volunteers who talked to her on her front porch. “But if we do that our taxes will go up, and we pay enough taxes and the schools in our neighborhoods are not even being taken care of. Where is that money going?”

Along with answering skeptical questions like that, Measure EE’s supporters have another challenge. Because it involves a tax, EE has to pass with a super-majority, two-thirds of the vote.

Should your property taxes go up to pay LAUSD teachers’ salaries?

Why LA is voting on Measure EE, the tax to support LAUSD

The long awaited Star Wars: Galaxy’s Edge theme park area opened at Disneyland over the weekend. And although there’s only one actual ride, superfans are psyched.

The Dodgers may be the sparkle in many an Angeleno’s eye, but it’s actually the team down the 5 freeway that’s won the most recent World Series.