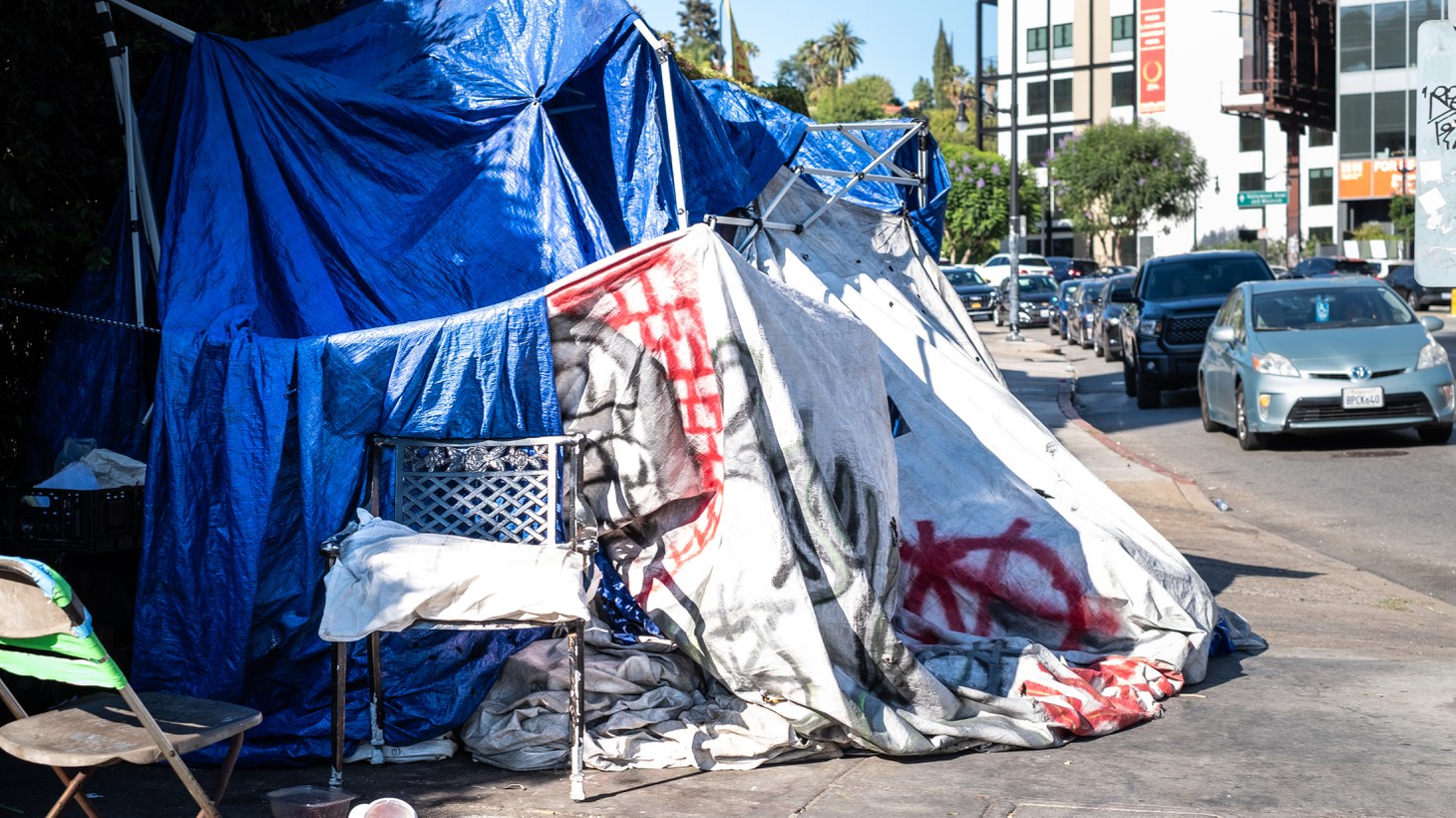 A large homeless encampment is erected in Hollywood, California. Some activists say unhoused people are unfairly targeted by LA Municipal Code ordinance 41.18, which bans people from sitting, laying, or sleeping in large swaths of the city. Photo by Amy Ta.

This morning, the Los Angeles City Council got an earful from protestors opposing an expansion of LA Municipal Code ordinance 41.18, the city’s controversial “anti-camping” law that has been maligned by activists for unfairly targeting unhoused people. The law will now include a ban on sitting, laying, or sleeping within 500 feet of schools or daycares.

The council voted 11-3 to approve the expansion after a raucous meeting, which was temporarily put into recess when a member of the public climbed over the podium and was handcuffed.

Reporter Adam Mahoney spoke to unhoused residents about what they thought of the law. He says he received mixed responses for his recent Capital B news investigation.

“There are some folks who didn't even know that 41.18 existed, right? [Although] that doesn't mean they weren't interacting with police or county and city representatives. … But there were definitely folks who have been put in situations where they've been constantly interacting with the police and constantly been pushed around the city because of the ordinance,” Mahoney tells KCRW.

Opponents of the ordinance say it does little to address the root causes of homelessness in Los Angeles. Mahoney’s investigation digs into some systemic issues at the root of the crisis, particularly those impacting Black Angelenos, who make up only 8% of LA’s total population but about 42% of its unhoused residents.

“As a Black Angeleno myself on the younger side, I've seen the remnants of racist and discriminatory housing policies that have placed us in the position we are today,” says Mahoney. “When you think of redlining or exclusionary zoning and subprime mortgages, more recently … there's just been whiplash after whiplash of Black folks in the city losing their access to affordable and safe housing.”

Laws like 41.18 mean Black people experiencing homelessness are also more susceptible to policing, and oftentimes, the violence that comes along with that. According to Mahoney’s investigation, roughly one-third of all use-of-force incidents are against unhoused residents.

Mahoney says that in the eyes of many activists, the real solution lies in providing people with direct resources and support, not increased policing.

“A lot of advocates believe that not only does policing compound this crisis, but if you were able to siphon off some of those resources that are put into policing and given to folks directly — whether that be job training, or supportive housing — that it would take the need away for policing,” says Mahoney.

LA’s recently expanded “anti-camping” law will have a disproportionate impact on Black Angelenos, who make up nearly 45% of the city’s unhoused residents.