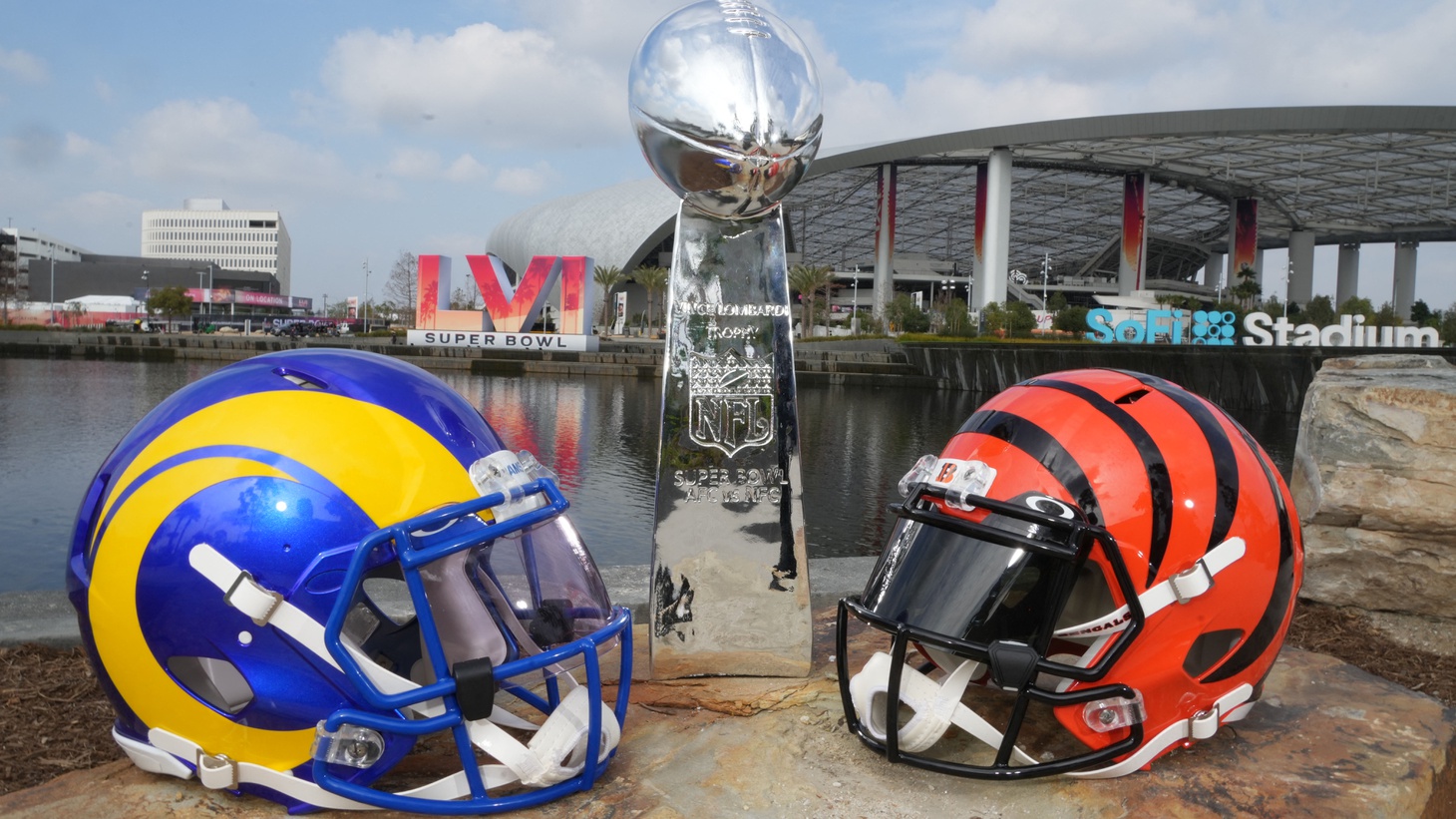 Los Angeles Rams and Cincinnati Bengals helmets are seen with a Vince Lombardi trophy at SoFi Stadium. The Rams and Bengals will play in Super Bowl LVI on Feb. 13, 2022. Photo by Kirby Lee-USA TODAY Sports via Reuters.

Inglewood Mayor James T. Butts has been waiting for this moment since 2013. That’s when Rams owner Stan Kroenke selected the old Hollywood Park racetrack to be the site of the NFL’s next football stadium. And now, after years of construction and a last-minute rumor that the Big Game would relocate to Texas, at long last, the Super Bowl is coming to Inglewood.

“It’s our coronation and our coming out party,” Butts says. “We are finally getting our due. … It only took a Super Bowl to do it.”

“Getting our due” means a few things to Butts: It’s not just the national attention and investment, but also respect. 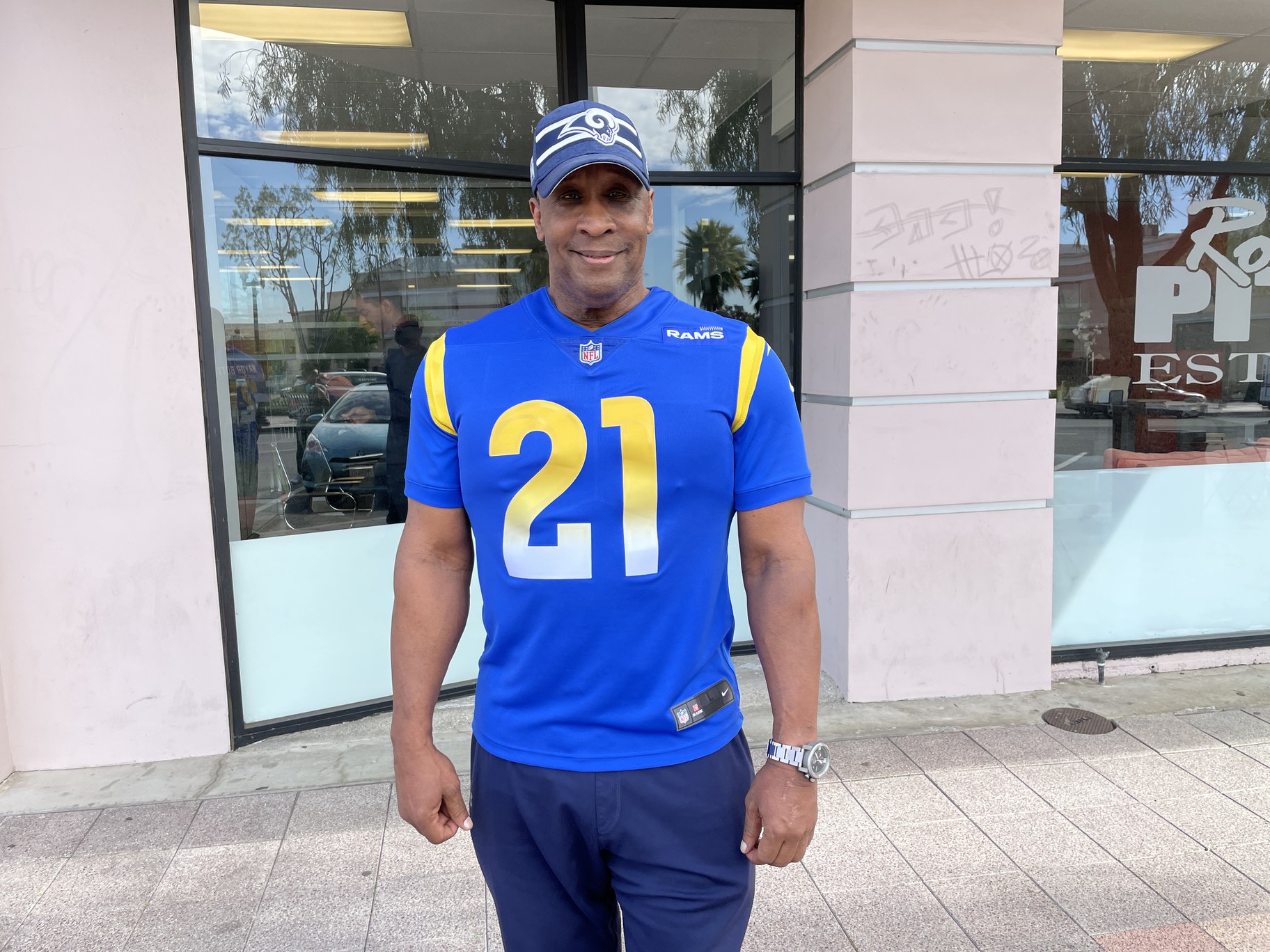 There’s little debate about Inglewood’s economic transformation. Investment has flooded the city over the past 10 years. The $5.5 billion SoFi Stadium — the most expensive in the world, and home to both the Rams and the Chargers — is just the most prominent example. The Fabulous Forum concert venue has been revived from its 1980s heyday. The LA Clippers are building an arena here, too. A Frank Gehry-designed music center just opened. A light-rail train line is due to open next year.

Some residents worry they’ll be priced out of this working-class city that’s about half Latino, yet best-known as a home base for LA’s Black culture. But many residents also see unprecedented opportunity coming to town.

New businesses dot its downtown. There’s a lot of opportunity, says Shanita Nicholas, co-owner of Sip & Sonder, a cafe on Market St., so long as you’re positioned to take advantage of it.

“There's never enough, right?” Nicholas says. “There’s still boarded buildings downtown, there are still spaces that are vacant. And there are entrepreneurs that can take advantage of those spaces if they have access.”

Nicholas and her business partner Amanda-Jane Thomas run a nonprofit called Sonder Impact that has hosted community events encouraging Black and Latino entrepreneurship in Inglewood. That’s also the goal of Khalifa Bey, head of the South LA Bureau of Tourism and Trade.

“Growth has to take place,” Bey says. She encourages residents to take advantage of the opportunities: “Open a business, stop complaining about it, and put yourself in a position to receive.”

While there’s lots of optimism and investment pouring into Inglewood, not every resident is happy about it. That includes Fredrisha Dixon, a community activist who’s running for mayor of Inglewood later this year.

“It’s a clean and beautiful community. I love Inglewood so much. But now that all of these sports venues are coming in … those improvements are not for us,” Dixon says. “We can’t afford to take advantage of them.”

Dixon rents in Inglewood and says her dream of owning a home here has all but evaporated. Housing prices have skyrocketed in recent years. Median household income in Inglewood sits just above $50,000, according to recent Census data. Zillow puts the typical home price at just below $750,000.

“If we can’t afford to buy in our communities, what future is there for us?” she says. 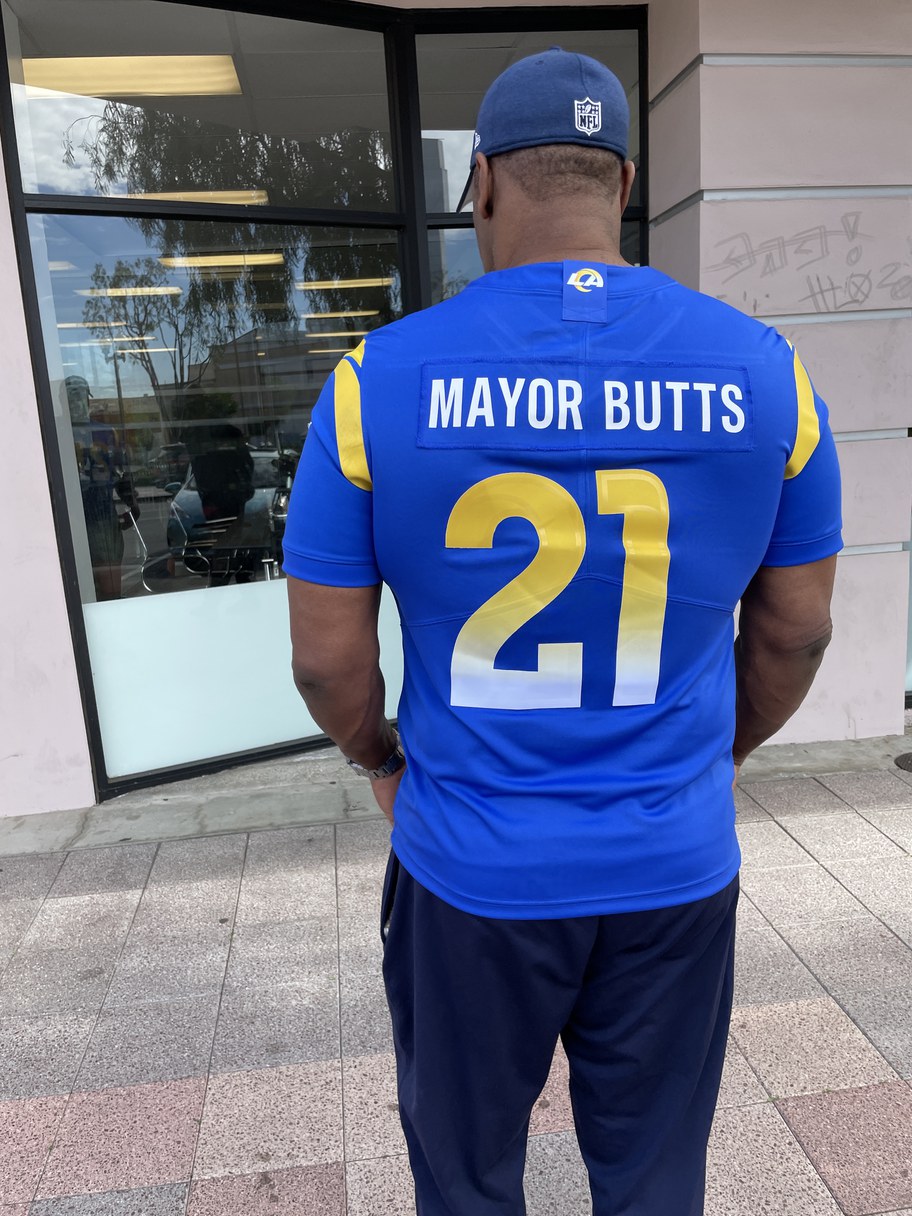 Inglewood Mayor James T. Butts shows off the back of his sporting his custom LA Rams jersey. Photo by Benjamin Gottlieb.

But Mayor Jams Butts says Inglewood is a success story even if its critics don’t want to see it that way.

“When you have a Black and Brown community that so overachieves, it generates a certain level of resentment that creeps its way into media coverage,” Butts says. “That’s what happens, and we’re used to it. We are used to someone always trying to figure out what the bad thing is. There is no ‘bad thing is.’ What there is — is greatness.”