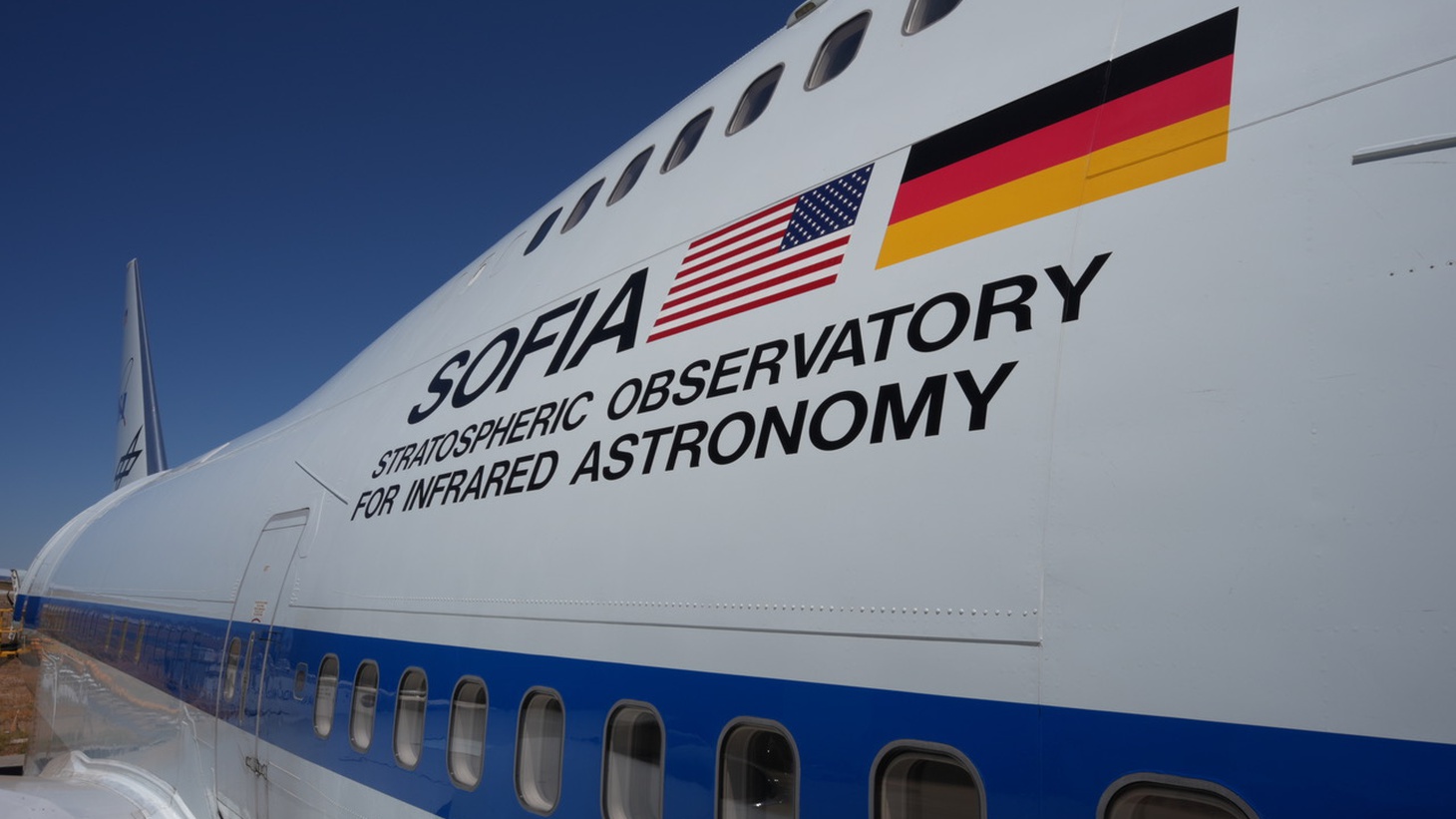 The world’s only flying infrared observatory waits on the tarmac in Palmdale, ready for its next mission. Photo by Kerstin Zilm.

On a tarmac in Palmdale, a Boeing 747 is ready for take-off into one of those spectacular Southern California sunsets. This night flight is not your usual redeye. This is a nine-hour trip with SOFIA — Stratospheric Observatory For Infrared Astronomy. It’s the world’s only flying space telescope.

It collects data from our neighboring galaxies through a hole as big as a two-car garage door. Its first mission was in 2014 and the project was supposed to last until 2034. But it might come to an early end this September.

NASA and its partner German space agency DLR recently decided to cut SOFIA from their budget. They argue that the program’s science productivity does not justify operating costs of $80 million per year.

“That is an unfortunate turn of events,” says Steve Mairs, an astronomer from the Universities Space Research Association’s SOFIA Science Center who works on board. “If SOFIA were to be discontinued, it would create an enormous gap in our knowledge of infrared astronomy for at least 15 or 20 years before we could launch another project like SOFIA. It makes me a little bit sad, but I still hold out hope.”

Congress has the final say about NASA’s budget and SOFIA’s future. The decision is expected later this summer.

SOFIA is a converted jumbo jet built in the 1970s. Its main passenger deck is completely stripped, with no carpets, seat rows, TV screens, or overhead bins. Instead, six workstations with consoles full of blinking screens, keys, and lights are screwed to steel plates on the floor.

“The whole theme of tonight is looking at the earliest stages of star formation,” explains Steve Mairs, as scientists get ready for tonight’s flight. “When we do that, we look back into our own cosmic history of where our own sun and planets come from and learn something about our galactic neighborhood, too.” 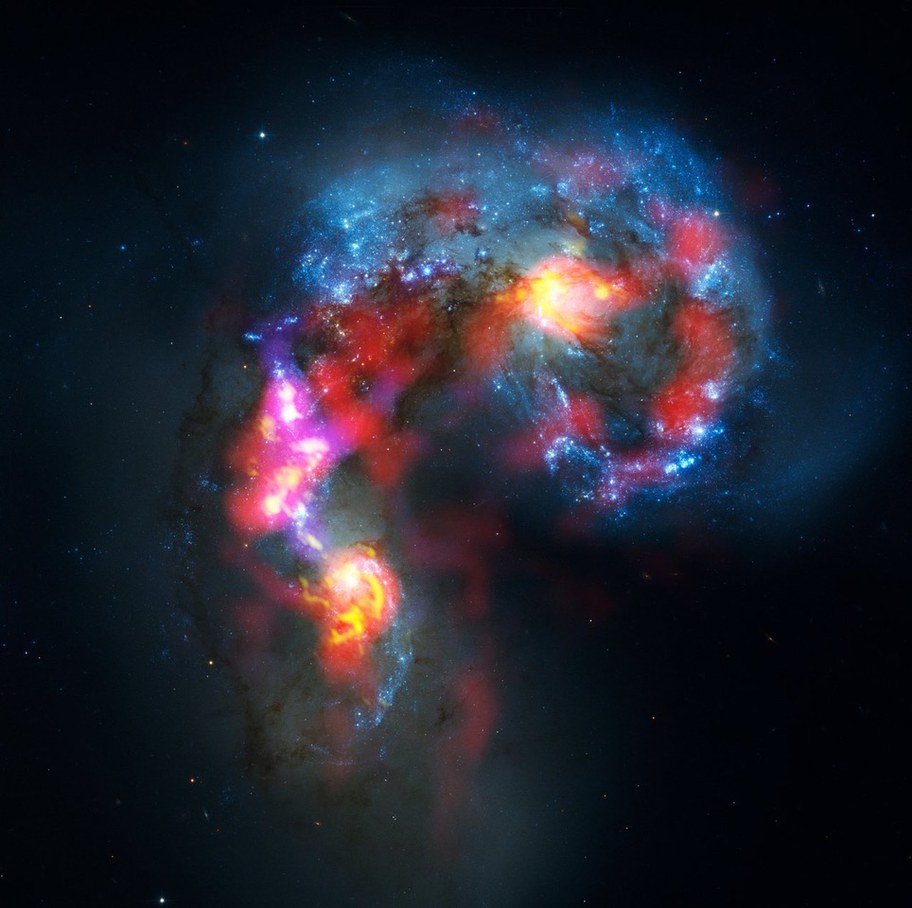 SOFIA’s mission on this flight is to look into the creation of stars while galaxies are merging. Photo courtesy of ESO European Organisation for Astronomical Research in the Southern Hemisphere.

Telescope operator Jillian Wrieden makes sure the 17-ton telescope stays focused on the targets in space the scientists want to look at. Tonight, they’re checking out the antennae galaxies, two galaxies merging millions of lightyears away and creating a lot of new stars in the process.

Operating a telescope during an earthquake and a hurricane

Keeping the telescope on target is not an easy task, says Oliver Zeile, lead telescope engineer. “We are operating the telescope with a mild earthquake and a hurricane going on all the time. The engines are vibrating. We got vibrations from the wings. There is no window over the opening, and we fly at 85% of the speed of sound,” he says.

To not get sucked out of the plane, and have enough oxygen in the cabin, the telescope is separated from the workstations by a wall. 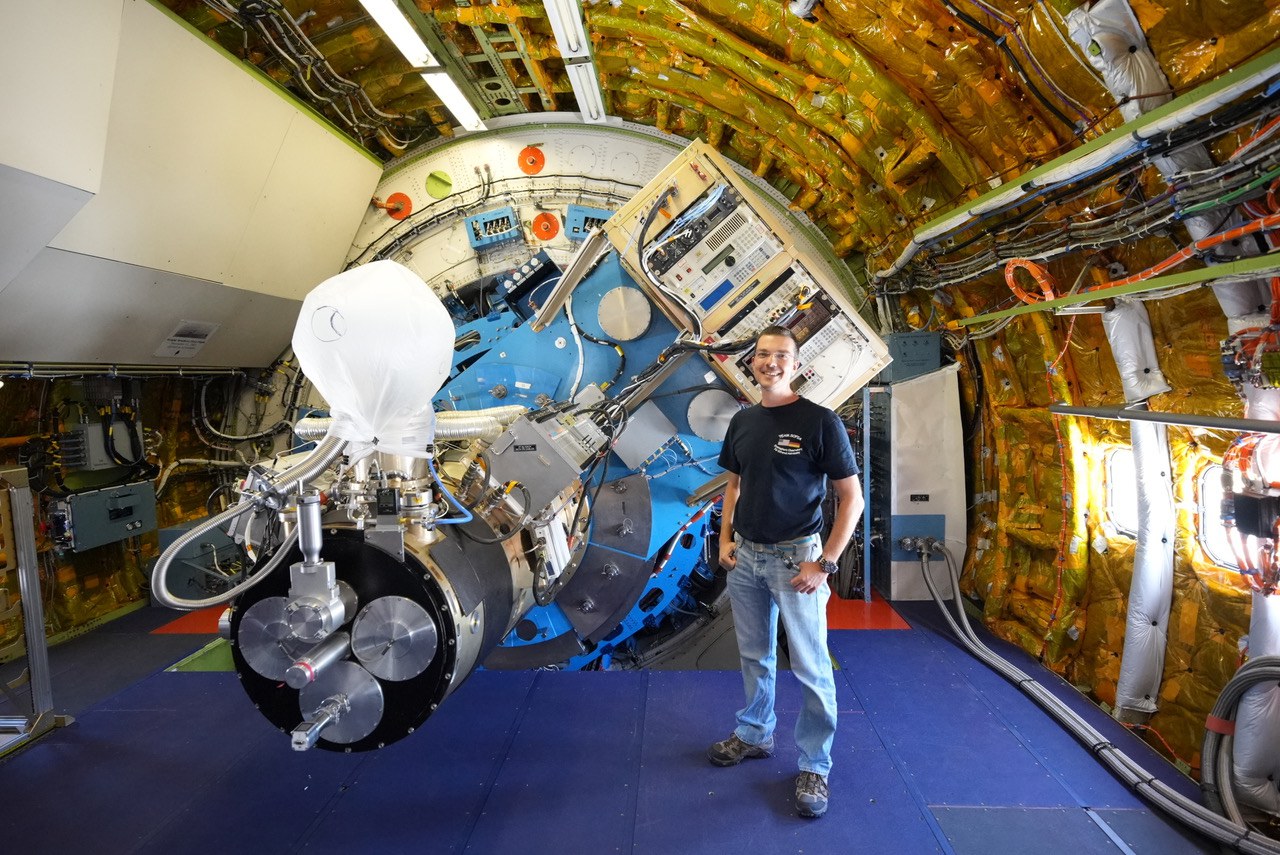 Lead telescope engineer Oliver Zeile stands in front of the telescope’s backside. The telescope’s mirror is on the other side of the wall, where a gate opens to the night sky during flight. Photo by Patrick Lutz.

SOFIA’s flight plan looks like chaotic zigzagging over the Pacific, only to end where the plane started. The flying observatory’s goal is to keep the telescope facing the merging galaxies for as long as possible during the night’s flight.

Pilot Liz Ruth loves the challenge of getting the airplane in just the right place at the right time, so the astronomers can make their observations. She says a tiny flight delay can completely ruin a whole mission. 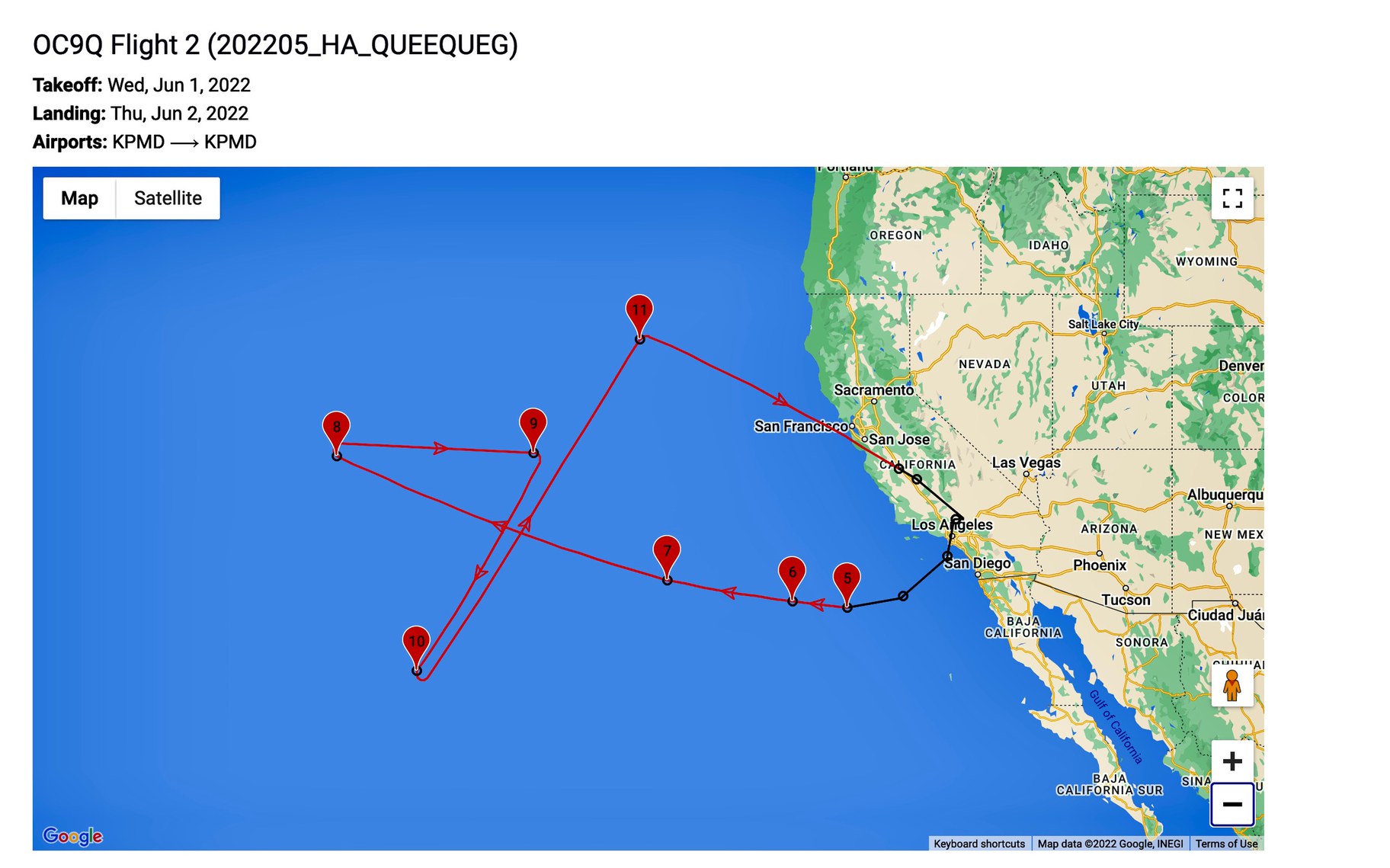 The flight plan for SOFIA’s mission is designed so that the observatory can face the telescope’s targets for as long as possible during the flight. Photo by Patrick Lutz.

SOFIA’s discoveries include a collection of the first infrared data about dwarf planet Pluto passing in front of a distant star, and the discovery of water on the sunlit side of our moon.

A glitch in the cooling system jeopardizes the observatory’s mission

With all its highly technical equipment on board, lots of things can go wrong. Any mistake could make this $850,000 flight unproductive.

Tonight, as the scientists' faces flush and they hold their breath, the cooling system had a glitch, explains infrared camera operator Sabrina Patzad.

“Everything was going well. And then it crashed during the flight,” she explains. “The instrument warmed up a little bit. That woke me up for sure.”

Five minutes later, everything is back on track. Had they not recovered, tonight’s mission would be over.

As the sun comes up over Palmdale, Liz Ruth starts the landing procedures. On the tarmac, the ground crew is already waiting to get the world’s only flying observatory ready for its next mission into the California sky. 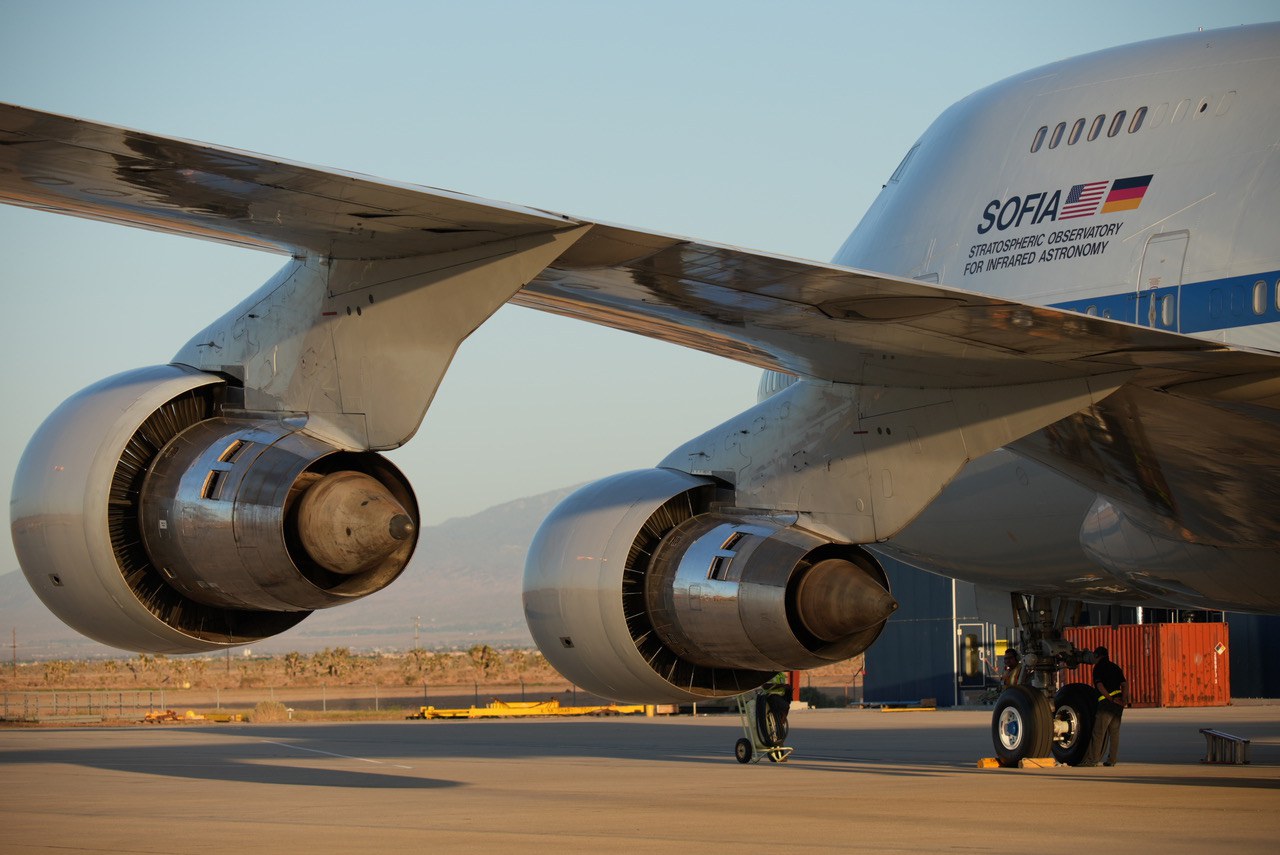 The jumbo jet-turned-flying observatory is parked at its home in Palmdale. Photo by Patrick Lutz.