John Luker is standing on the top of a 3,000 foot hill at Sage Ranch Park, surrounded by largely undeveloped land on the border of LA and Ventura County.

“As I look around me, I see nothing but rolling hills, beautiful rock formations, a lot of chaparral. A lot of people think this is an industrial wasteland filled with bubbling pools of ooze, and that’s not correct whatsoever.”

He’s looking out on the Santa Susana Field Laboratory (SSFL), a lush landscape where chemical waste has been deposited since the Space Race. From 1948 until 2006, SSFL was a test facility for the nation’s space exploration programs. It was home to 10 nuclear reactors, four launch stands, and more than 30,000 rocket tests. 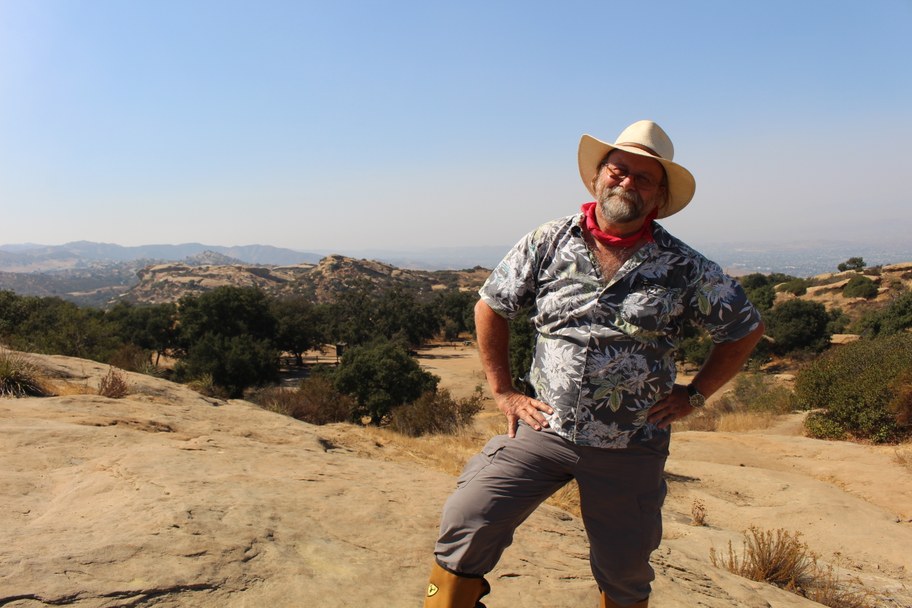 Luker lives in Box Canyon, a mile from the front gate of SSFL. “One of the reasons why I got involved in this is I heard all the hubbub and I was raising a family, and I really wanted to know if there was anything that was going to harm them.”

Several nuclear accidents took place at the lab during its operation, including a partial meltdown in 1959 that some experts believe was the worst nuclear disaster in U.S. history, surpassing the radiation released during the Three Mile Island accident in 1979.

The tests and meltdowns have scattered the property with chemicals like plutonium and strontium-90, chemicals that have moved downstream and created real cancer risks for nearby communities. In 2007, a federally funded study found a 60% higher rate of certain radiosensitive and chemosensitive cancers for those living within two miles of the site. 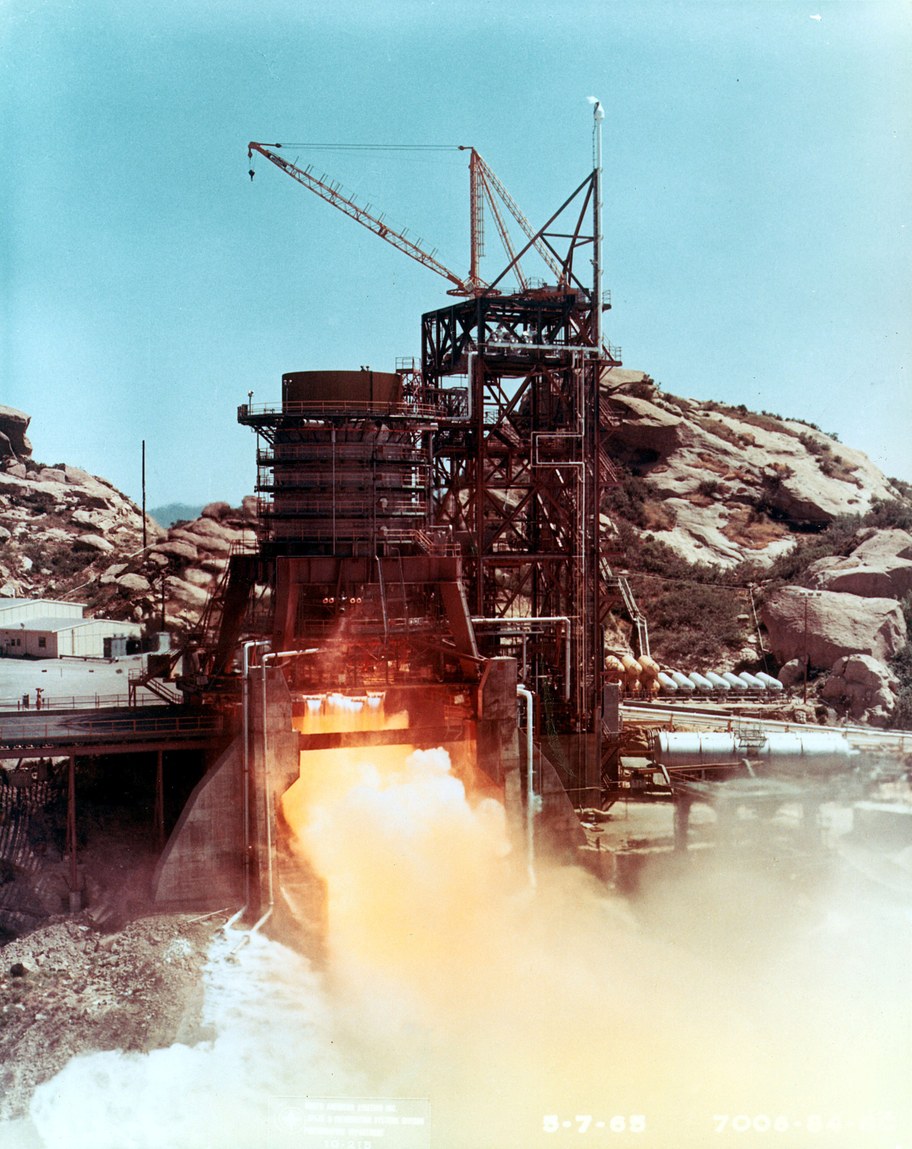 The Coca test stands played major roles in the Apollo program, which sent astronauts to the moon. Traces of TCE (Trichloroethylene) were found throughout the soil, surface and groundwater as a result of all the testing that occurred over the years. Photo courtesy of Physicians for Social Responsibility-Los Angeles. 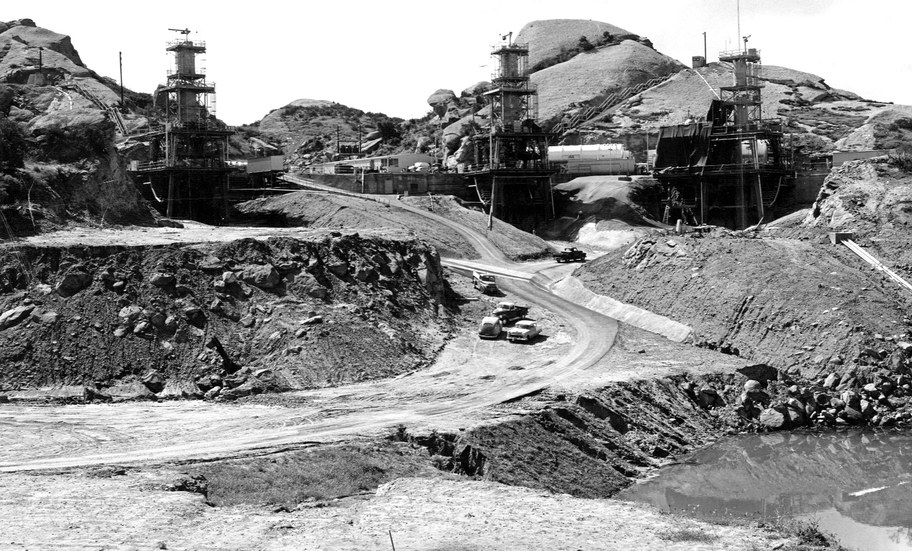 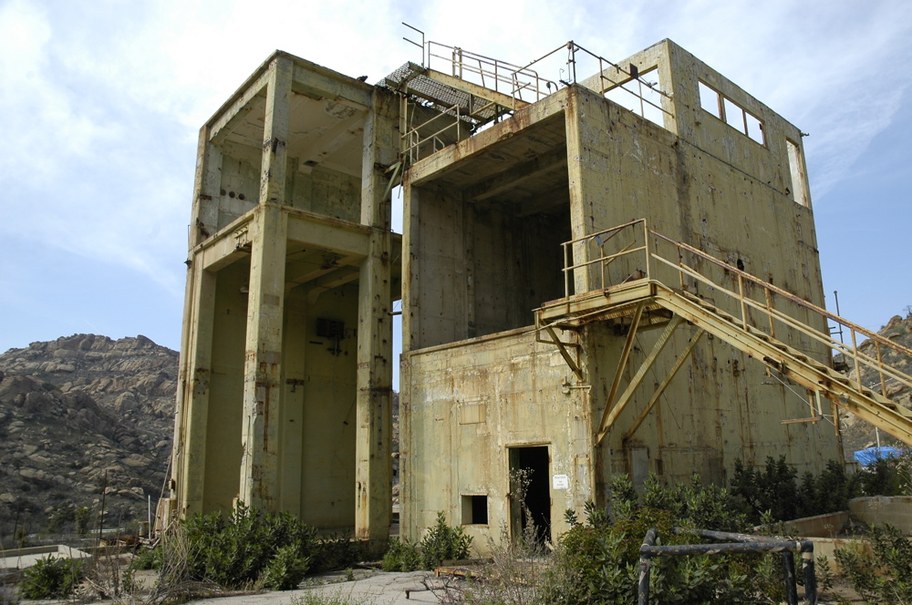 In 2010, the state of California reached an agreement with two of the land’s owners and operators, NASA and the Department of Energy, to clean up the site. But that cleanup has barely begun, held up by disagreements and bureaucratic red tape.

As the polluters and state officials fight, a new player has entered the ring: The Santa Ynez Band of Chumash Indians. The tribe is based in Santa Ynez, a small rural town in Santa Barbara.

“We noticed that non-federally recognized tribes hadn't really protected the heritage sites,” says Sam Cohen, the tribe’s lawyer. He points to one site in particular, the Burro Flats Painted Cave, which is home to pictographs and a rock outcropping believed to be used by native people for summer and winter solstice ceremonies. Chumash natives knew there were more sites on the property to be discovered. 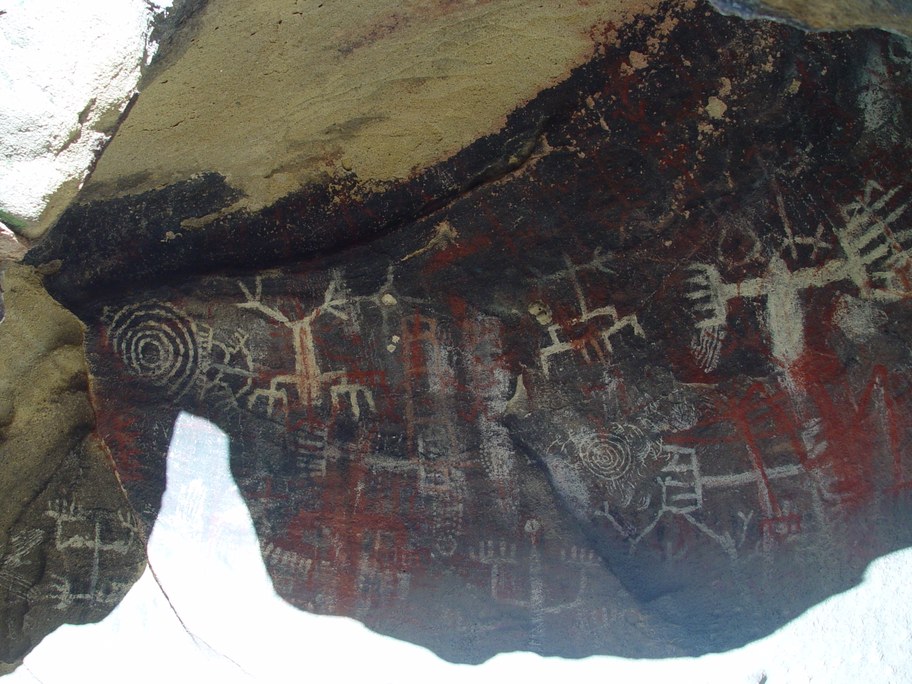 “We had the entire property resurveyed by archaeologists and Native American monitors,” says Cohen. “We found over 10 sites with cave drawings and paintings and over 100 cultural resource sites.”

The tribe wants to make sure those sites are protected. So in September, NASA submitted a request to the National Park Service to list the property on the National Register of Historic Places as a cultural district.

“The entire 2,800 acres was a sacred crossroads and solstice worship area for three tribes. Given the rich history of the site, it remains a sacred site today,” says the tribe’s chairman, Kenneth Kahn.

This adds an important layer to the cleanup plan. How will the polluters responsible for digging up and disposing of the toxic soil do so without disturbing the site’s cultural heritage?

“It's really relatively simple. You remove the contaminated soil, replace it with clean soil and you revegetate,” says Dan Hirsch, who has been leading the fight to get this site cleaned up for decades as president of the nuclear policy organization Committee to Bridge the Gap. He says protections for Native American resources already exist in the 2010 cleanup agreement.

“It’s of course unlikely that a cave painting would be contaminated in the first place because no one built reactors or did rocket tests inside these small caves, but if there were some contamination and you couldn’t remove the pollution without damaging the artifact, the agreement exempts it from cleanup.”

He’s worried that by putting the entire site on the historic registry, NASA is trying to strategically avoid cleaning it up to the fullest extent.

Melissa Bumstead shares that worry. She lives about four miles from SSFL, and believes her young daughter’s leukemia was caused by the radioactive and toxic chemicals abandoned on the property. She thinks the tribe’s involvement is a way for the polluters to circumvent the cleanup.

“Every single cleanup advocate who's been working on this, we all became physically depressed when we heard about this,” she says. “It was clearly so cleverly planned. They've been working on this for four years quietly and it's a very politically savvy move.”

Sam Cohen with the Santa Ynez Band of Chumash Indians rejects these accusations.

“That's just fear mongering, basically.” He says the tribe is committed to the cleanup as long as Native American cultural resources are protected.

This year, the Department of Energy began removing 10 of the most contaminated buildings at the Radioactive Materials Handling Facility Complex, which was built in 1959 to handle nuclear fuel.

“This place was sort of the center of the nation for nuclear research at the time,” says Luker. “There was a lot of sloppy handling there. It is very badly contaminated and so are the drainages surrounding it. It's all going to have to get dug up.”

But while some building removal is underway, the soil and groundwater cleanup has barely started. That’s because there’s so much disagreement on how to go about it. 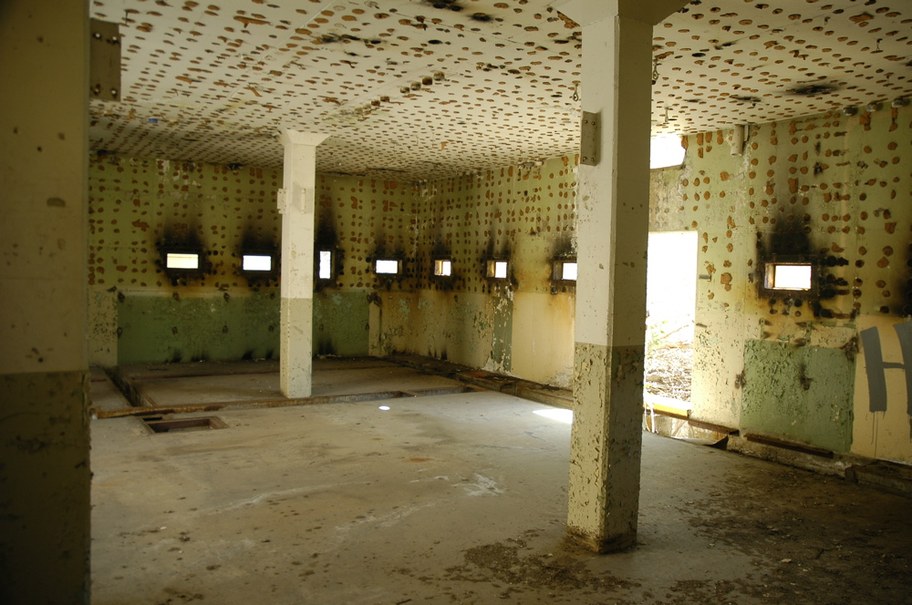 The inside of a control room at a rocket engine test area. The building has been removed but the dirt beneath has not been remediated. Photo courtesy of John Luker.

People like Bumstead and Hirsch want the polluters to clean it up “to background,” meaning to the level it was at before the space industry started building and testing on the land. That could cost an estimated $1.5 billion.

But people like Luker worry that cleaning up to that extreme of a level would strip the land of its natural and cultural beauty. He says all the topsoil and everything growing on it would have to be removed.

“What would this place look like if it were cleaned to background? Pretty much a big parking lot — 700 to 900 acres completely stripped of topsoil,” he says. “They're going to take it all the way down to bedrock. [It] looks bad.”

He says wild animals like mountain lions would no longer thrive in a habitat reduced to bedrock, and that concerns him. He’s been fighting to build a wilderness bridge across Highway 101 nearby, and says SSFL plays an important role in the future of the local mountain lion population.

“We’re standing in the most important habitat linkage in California,” he says. “All of the genetic diversity that goes into the Santa Monica Mountains comes through these hills and walks through the Rocketdyne complex. If you destroy what's up here in order to take out everything down to a background level, then the cats may not want to move through here anymore.” 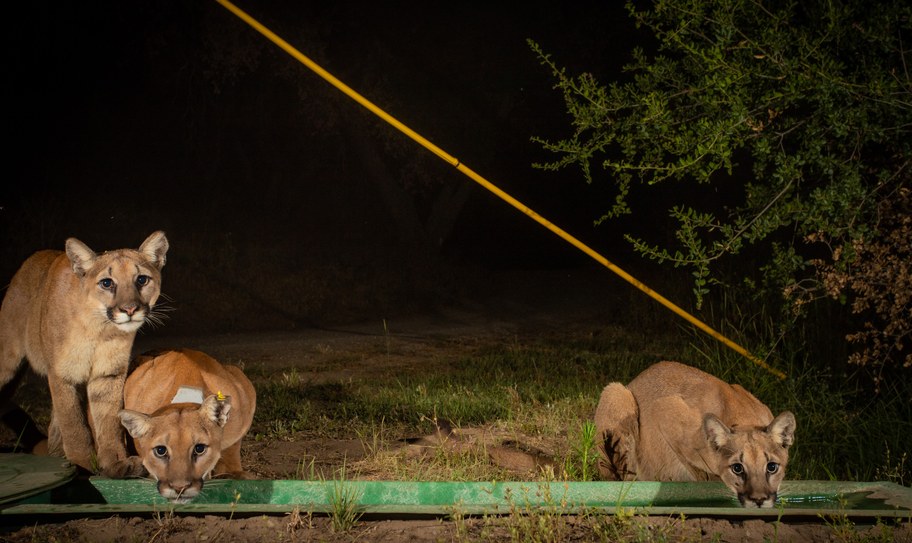 P-62 (Puma 62) and her cubs at a wildlife water guzzler on Boeing property at the Santa Susana Field Laboratory. P-62 was collared by the National Park Service in 2018 as part of their mountain lion study in and around the Santa Monica Mountains. Photo by Roy Dunn, Cougarmagic.

Instead of cleaning up to background, he wants to see the soil cleaned to recreational standards, which is the least extreme. It would mean cleaning it up to the point where people could safely visit, but not live or work.

The Santa Ynez Band of Chumash Indians say they support any cleanup that remediates the site and protects sacred sites.

Ultimately, it's in the hands of state regulators to decide what level of cleanup the polluters must do, and enforce it. Jared Blumenfeld, the director of Cal EPA, is standing firm on the full cleanup “to background” laid out in the 2010 agreement.

“If parties are not willing to abide by a document that they signed, then we'll have to bring them to court to ensure that they do,” he says.

Lawsuits will further delay the cleanup, but in a multi-billion dollar battle filled with distrust that’s been going on for more than a decade, it’s likely the only way.

Is Santa Susana a toxic rocket or tribal ceremony site? Depends on who you ask

John Luker is standing on the top of a 3,000 foot hill at Sage Ranch Park, surrounded by largely undeveloped land on the border of LA and Ventura County.

With a lot of LA’s bars closed for the last seven months, if people are having evening cocktails, they’re probably doing it at home.

With the Electoral College, how much do Californians’ votes count?

One KCRW listener asked, “Does it really matter if we vote? I mean isn't the electoral vote [Electoral College vote] still what's more important in each state? How can we...