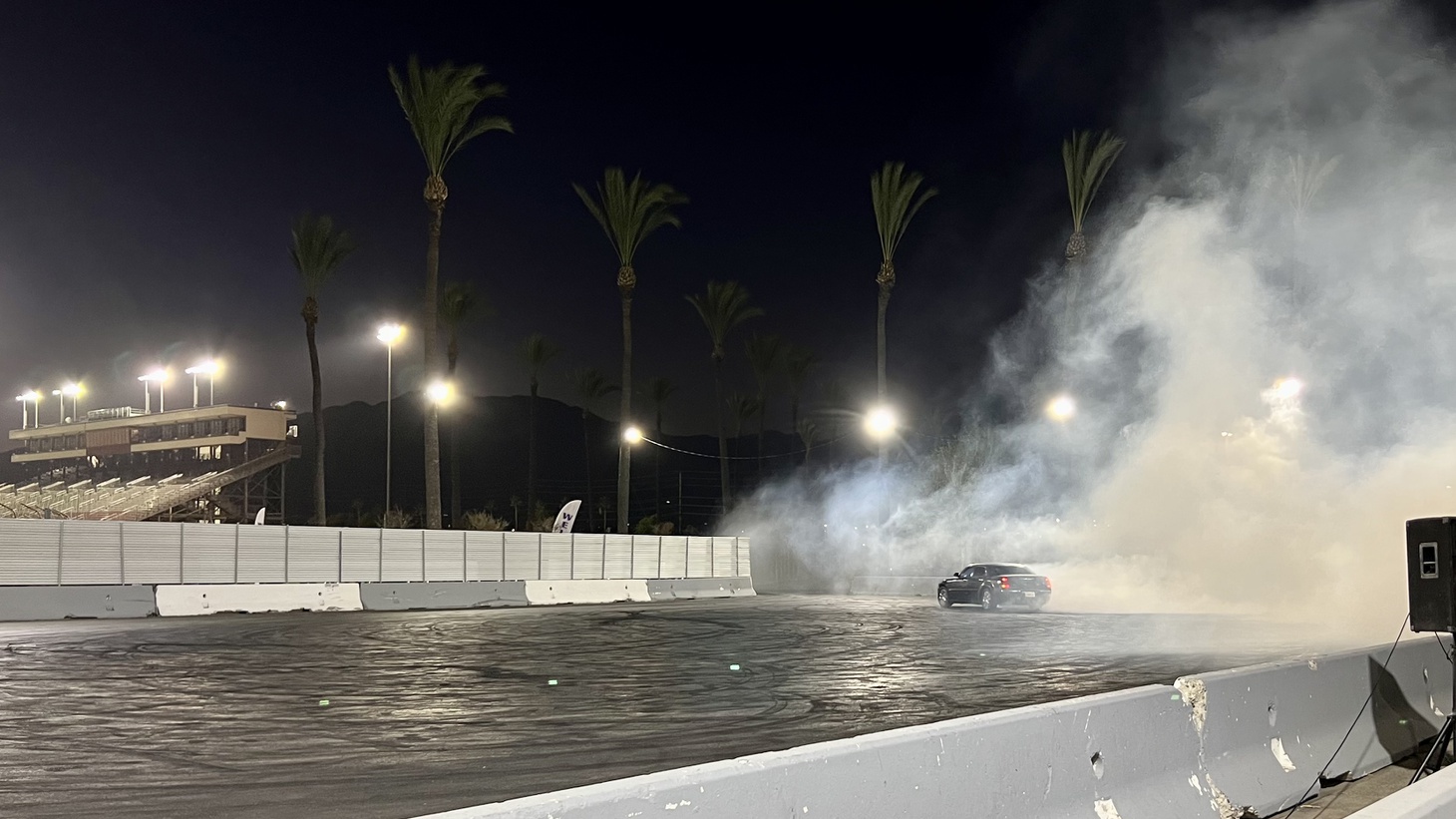 A driver squeals around in donuts in the burnout box at Irwindale Speedway. Photo by Rebekah Ludman.

Alex Lagunas has driven his car in street takeovers several times this year, but he showed up to a recent HeatLA event at Irwindale Speedway to see what the track is all about. He put on a crash helmet, strapped into a seatbelt with six buckles, and paid $40 to sit in the passenger seat of a fast car for a few minutes while a trained professional driver drifted, squealing his tires in donuts and creating smoke from the friction of his tires on the asphalt.

The thrills without the chills.

‘'Now I'm enjoying it for the first time,” Lagunas said afterwards. “You don't get harassed by the cops, which is the best part. You don't have to worry about ‘Oh, damn the cops are gonna pull me over, my car's gonna get impounded, I'm gonna get a ticket.’”

The Alex Lagunas’s of the world are exactly who Irwindale Speedway President Tim Huddleston wants here.

“We have a huge following here at Irwindale Speedway of past street racers that have brought it here to the racetrack, and several of them work with us to help promote keeping it off the street come in here to Irwindale Speedway,” Huddleston says.

Huddleston explains that events like HeatLA or Thursday Night Thunder are designed to create a similar experience to squealing around in donuts on the streets, from the smell of burnt rubber to the overwhelming wave of smoke after a drifting session.

But without the whole running-from-the cops thing.

“Our grandstand sometimes has up to 2,000 people cheering them on, screaming [at] them, playing music, the DJ hyping them up,” Huddleston says. “We can make them a hero here at the racetrack. On the street, they become villains.”

Huddleston and the pro drivers at the track also emphasize that stunt driving can be done safely under controlled conditions.

“You have to have a fire extinguisher, the proper harnesses, safety equipment, helmets, all that,” explains Will Sarson, who helps ridealong participants get set up. “On a closed course, you're not worrying about endangering others. The only thing that's going to be on course are other cars that have the same safety requirements.”

For some who love to show up at an illegal street takeover, though, the safety gear and social acceptability at the Speedway undercuts the whole point.

DG, who only gave his initials because of his participation in street takeovers, told KCRW everybody at a takeover likes to break the law at least a little bit.

“Nobody gets a good kick out of an organized meet,” he says.

DG is into the chaos of the street.

He says at the illegal car meets he’s attended, there’s at least one person who has been hurt every time. “There's this saying that they say at a street takeover, it’s ‘get back or get smacked,’” he says.