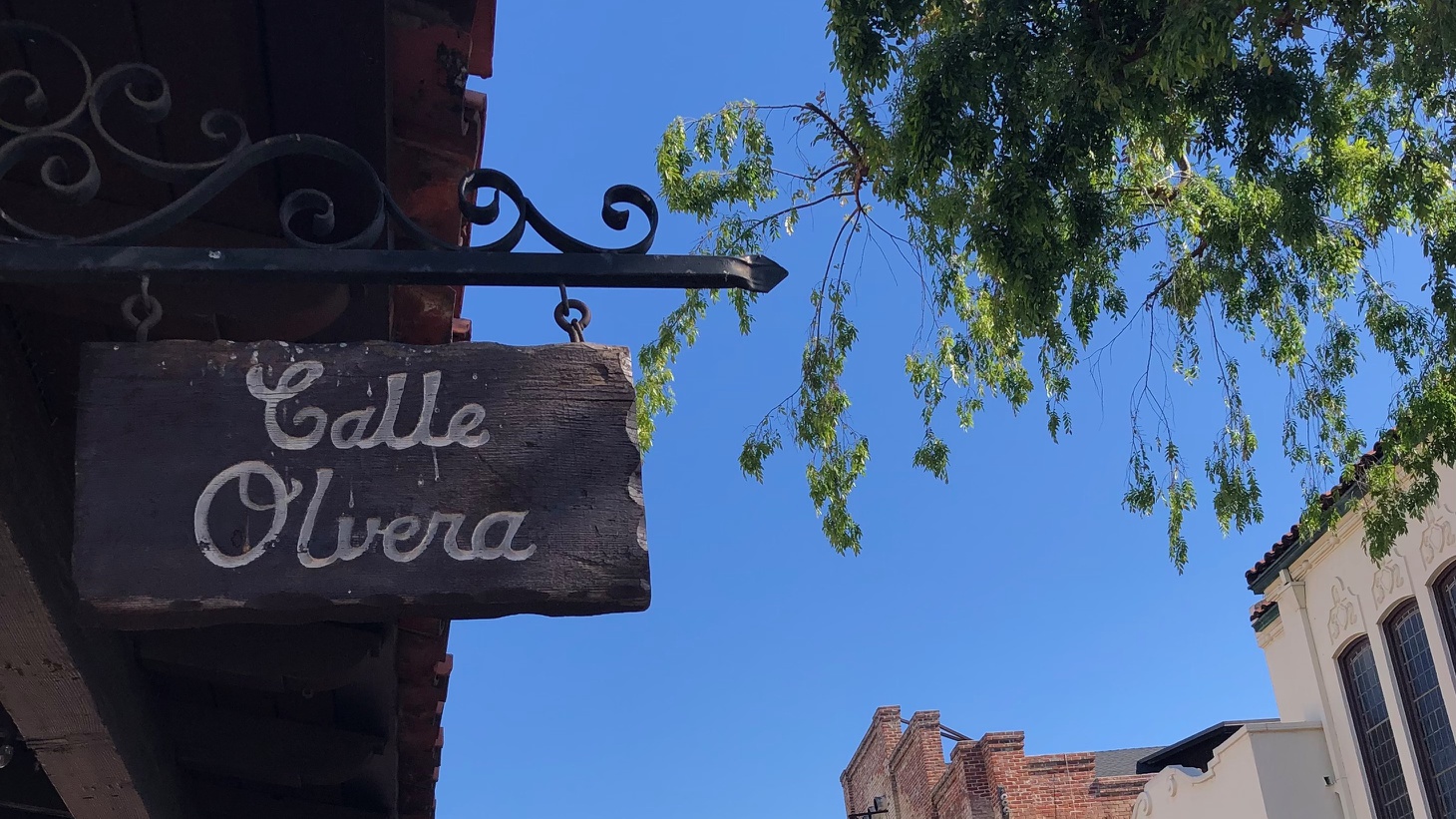 “A Spanish American social and commercial center … would furnish Los Angeles with the greatest tourist attraction she may ever have,” Christine Sterling (aka the “Mother of Olvera Street”) wrote in a 1926 journal entry. Photo by Mike Schlitt.

Just 600 feet long, LA’s Olvera Street is the oldest street in the city, a brick-paved lane that functions as a marketplace, theme park, and a living museum. The street as we know it today — an idealized re-creation of an open-air Mexican market — was actually the brainchild of a divorced socialite from San Francisco who’d never been to Mexico.

But as with so many places in LA, the history of Olvera Street is complicated. Though created according to the vision of a white outsider, the street reflects and preserves the legacy of a once-Mexican city, and has since been claimed by generations of Latino Angelenos as their own. 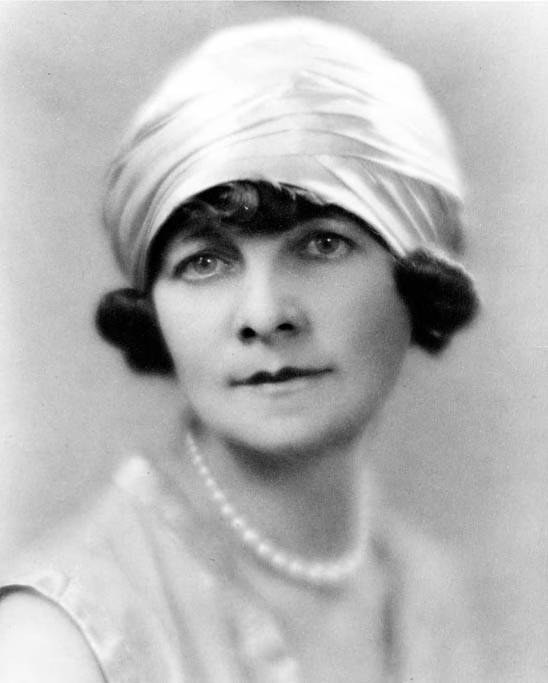 This portrait of Christine Sterling was taken in the 1920s. Born Chastina Rix in Oakland, California on November 5, 1881, she changed her name to Christine as a teenager. After a brief first marriage, Sterling wed attorney Jerome Hough. In 1920, they moved to Hollywood with their two young children. Hough abandoned the family and soon died of a stroke, leaving Christine a widow without means. Around the time of her husband’s death, Sterling began work on her Olvera Street project. Photo courtesy of Los Angeles Public Library.

Christine Sterling was drawn to Los Angeles, like thousands of others at the time, by literature praising the virtues of life in Southern California. As recounted in her book, “Olvera Street: El Pueblo de Nuestra Señora la Reina de Los Angeles: Its history and transformation”:

“The booklets and folders I read about Los Angeles were painted in colors of Spanish Mexican romance. The sunshine, mountains, beaches, palm trees were here, but where was the romance of the Past? Old Missions, rambling adobes — the strumming of guitars and the click of castanets.”

Sterling visited the old plaza area, hailed in popular literature as “the birthplace of the city,” but found the site “forsaken and forgotten,” she wrote in her journal. “Down a dirty alley, I discovered an old adobe, dignified even in its decay. Across the front door was nailed a black and white sign, “CONDEMNED.”

By the time Sterling arrived at Olvera Street in 1926, the historic heart of the city had fallen on extremely hard times.

“The crime, the filth of everything, a woman dying of consumption in a dirty room, sewer water running down the street from broken pipes,” she wrote in her journal.

As Sterling stood in the abandoned alley, staring out at 26 buildings scheduled for demolition, she was struck by a vision:

“I closed my eyes and thought of the Plaza as a Spanish American social and commercial center. It would furnish Los Angeles with the greatest tourist attraction she may ever have — a spot of beauty as a gesture of appreciation for our historical past.”

But in fact, the historical past bears little resemblance to Sterling’s romantic view of things. 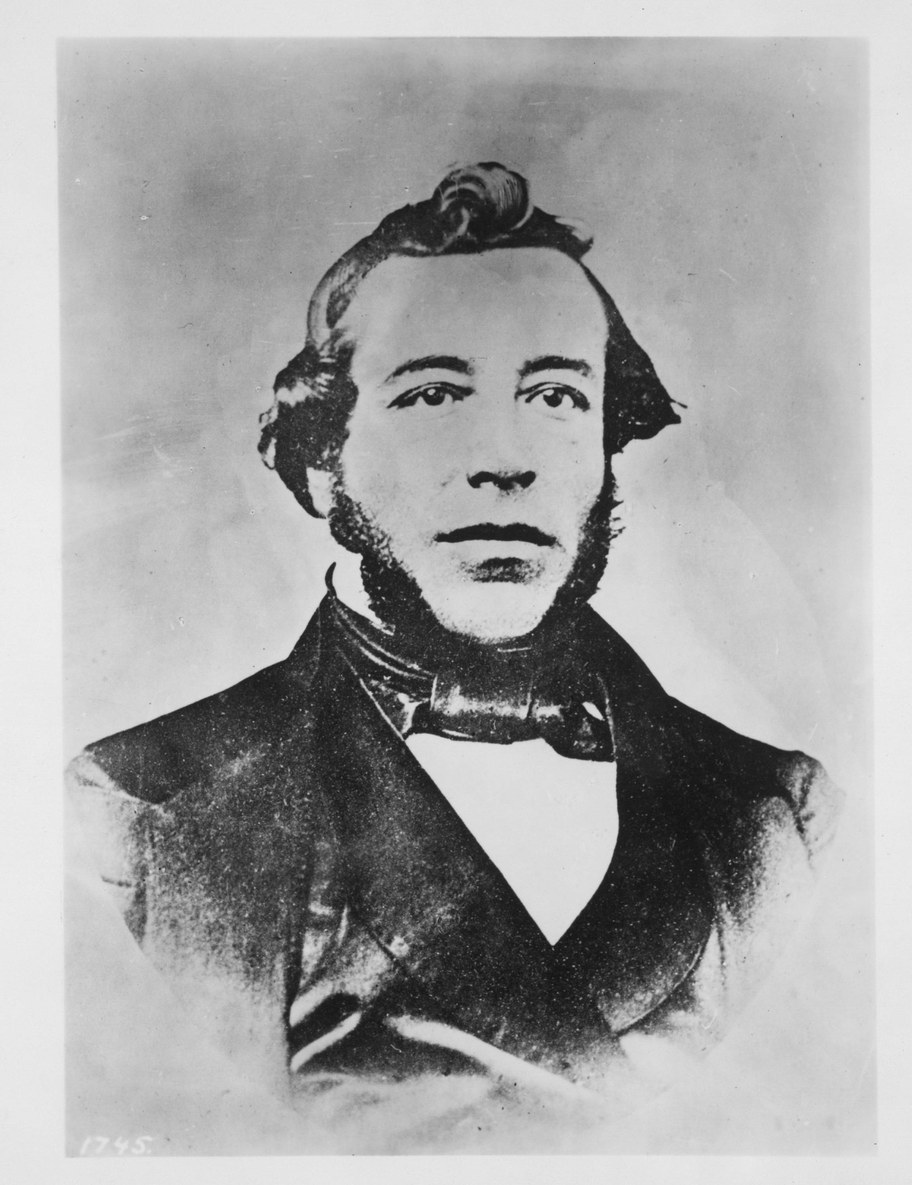 Augustin Olvera — Olvera Street’s namesake — arrived in Southern California in 1845, when Los Angeles was still part of Mexico. He fought to keep Americans out of California, then became a key figure in negotiating a peace treaty. Olvera became a U.S. citizen in 1850 and was elected LA’s first county judge. When he died in 1876, the old Mexican ciudad was becoming an American boomtown. Photo courtesy of Los Angeles Public Library.

Sterling wrote in her journal on August 3, 1926: “Called today on Harry Chandler of the (LA) Times. ... He is a very busy man but not too busy to talk of idealism and sentiment.” 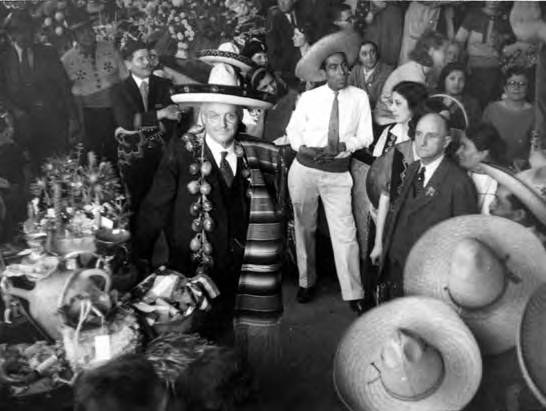 Harry Chandler is pictured at a birthday party on Olvera Street in 1938. When Sterling asked for his assistance, Chandler was arguably the most powerful man in Los Angeles. Her proposal to build a Mexican marketplace may have rekindled fond memories of the old LA Chandler had known when he arrived as a teen in 1882. But sentiment was only a small part of Chandler’s calculation. He knew a popular tourist site on Olvera Street would boost property values for his extensive real estate holdings in the area. The new site would also help accelerate his plans to build a Union Station right next door. Photo courtesy of Los Angeles Public Library.

Chandler agreed to support Sterling’s Olvera Street project, but he wasn't going to do it with his money alone. Instead, he called one of his famous luncheons. Estrada tells KCRW, “It was well known that if Harry Chandler called you into a luncheon, you had better bring your checkbook.”

Each of Chandler’s lunch guests chipped in $5000 to create a for-profit organization, headed by Chandler, for the restoration and creation of Olvera Street, with Sterling as chief administrator.

Sterling was elated by the cash about to flow toward creating her dream. “I feel like Cinderella when the fairy godmother changed the pumpkin into a fine coach and the rats into prancing horses,” she wrote in her journal. 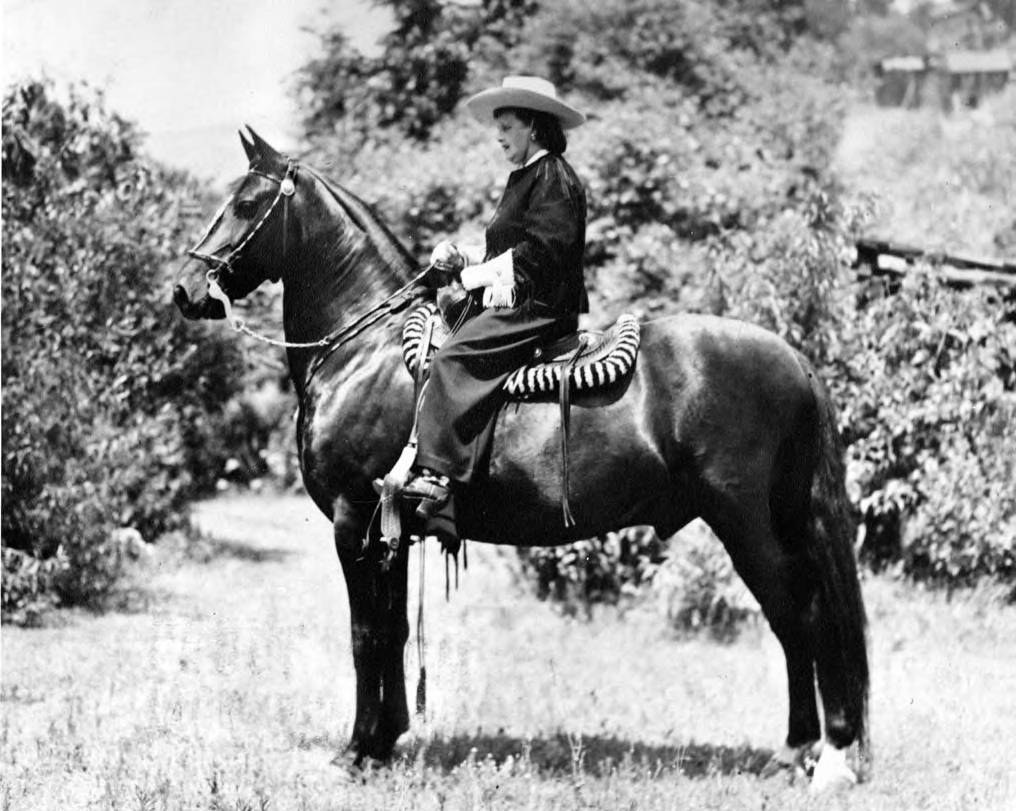 Sterling’s Olvera Street project broke ground on November 7, 1929. A labor force of 25 LA County jail prisoners was personally provided by the Los Angeles Chief of Police. “The prisoners were good workers, one escaped but we managed to keep the others.” Sterling wrote in her journal

“November 21 — One of the prisoners is a good carpenter, another an electrician. Each night I pray they will arrest a bricklayer and a plumber.”

“November 24 — My prayers answered with just a slight error. Two bricklayers and no plumber.”

“December 25 — Prisoners had a little Christmas party in the patio of the  adobe. … In the cellar of the Pelanconi House, prisoners dug up several cases of whiskey while the guard was on the other end of the street, and a truck had to take them back to jail.”

Four months later, the renovation was complete. “Not a penny over budget,” Sterling enthused. “We have made little awning stands or ‘puestos’ for the street. Each one will be given to a Mexican family and they will sell all things typical of Mexico. Tourists will be interested in their wares and not only will this mean a living for the Mexican, but it will make the street picturesque and colorful.”

Sterling’s revitalized Olvera Street opened to the public on Easter Sunday, 1930. It was an instant success. 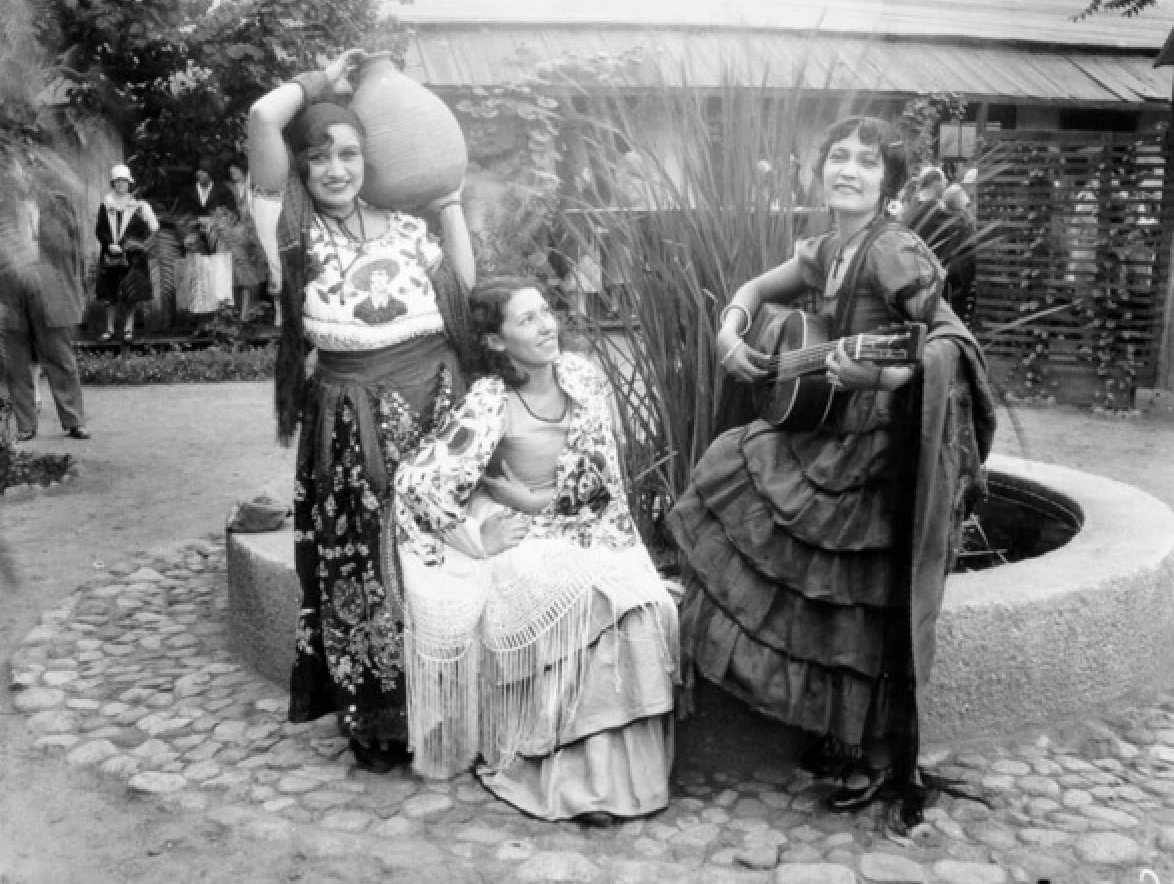 “Thousands of people came and everyone seemed happy,” she wrote. “Out of the heart of the Mexican people is spun the gold of romance and   contentment. No sweeter, finer people live on this earth, and whatever evil anyone might believe about them has been bred in the darkness of ignorance and prejudice.”

Of course, Sterling herself contributed to that ignorance and prejudice, for instance, hiring actors to portray campesinos sleeping underneath cactus trees on Olvera Street, where you could also find “lazy Mexican” ceramic keychains for sale.

Sterling was so pleased by the success of Olvera Street, she tried something similar for LA’s Chinese historical past. When the new Union Station opened in 1939, displacing thousands of Chinese locals, Sterling built a brand new commercial theme park just a few blocks away from Olvera Street called China City. A brochure read: “American promoted, Chinese operated amusement center designed to attract tourists.”

But China City was not nearly as successful as the Mexican marketplace next door. It was destroyed by fire (possibly arson) in 1948. 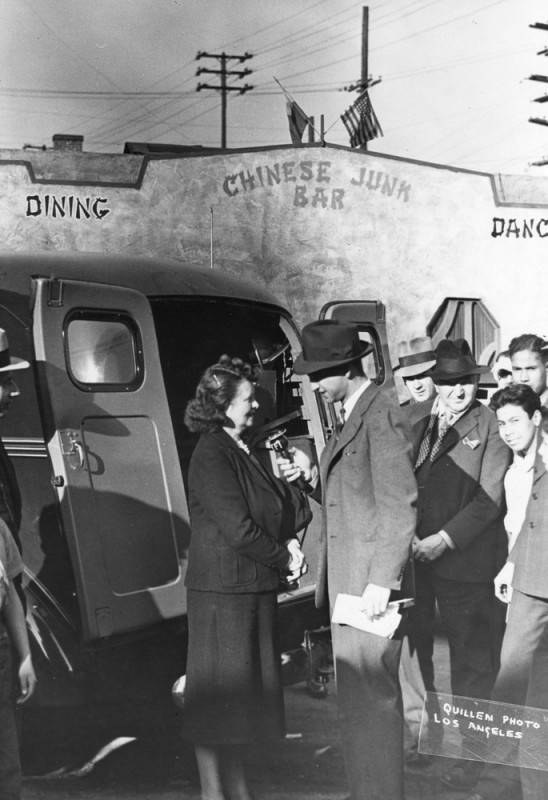 Christine Sterling was interviewed on KFI Radio on February 20, 1939 after the first mysterious China City Fire in the commercial tourist zone, which occurred less than one year after it opened. A second fire in 1948 closed down China City for good. Photo courtesy of Los Angeles Public Library.

“Most ideals are destined to be destroyed by human imperfections,”  Sterling would later write in her book. She spent her final years running Olvera Street’s day-to-day operations.

In an interesting historical twist, Sterling lived in Chavez Ravine from 1938 to 1959, and was among those evicted to make way for Dodger Stadium. She eventually took up permanent residence in Avila Adobe on Olvera Street, where she continued to run its day-to-day operations until her death in 1963.

Like much of Los Angeles history, Christine Sterling’s legacy is complicated. Opinions differ, but there’s no denying one simple fact — Olvera Street would not be here today if it weren’t for Christine Sterling. She cared deeply about the street and the merchant community who work here.

“Mrs. Sterling was really a visionary,” insists Olvera Street’s shop owner Mike Mariscal. “For her to just create this place and then to help poor Latino families to survive, that’s what this place was born on.”

Mariscal has been working at his family store on Olvera Street for 62 years. He says, “Most businesses here have been passed down through single families from generation to generation.”

Mariscal’s daughter Christina Mariscal-Pasten, a fifth-generation Olvera Street merchant, adds, “We’re this little gem. We are business owners, we are mom-and-pop shops, we are cultural historical resources that continue traditions.  When you’re here, you feel a sense of coming home.” 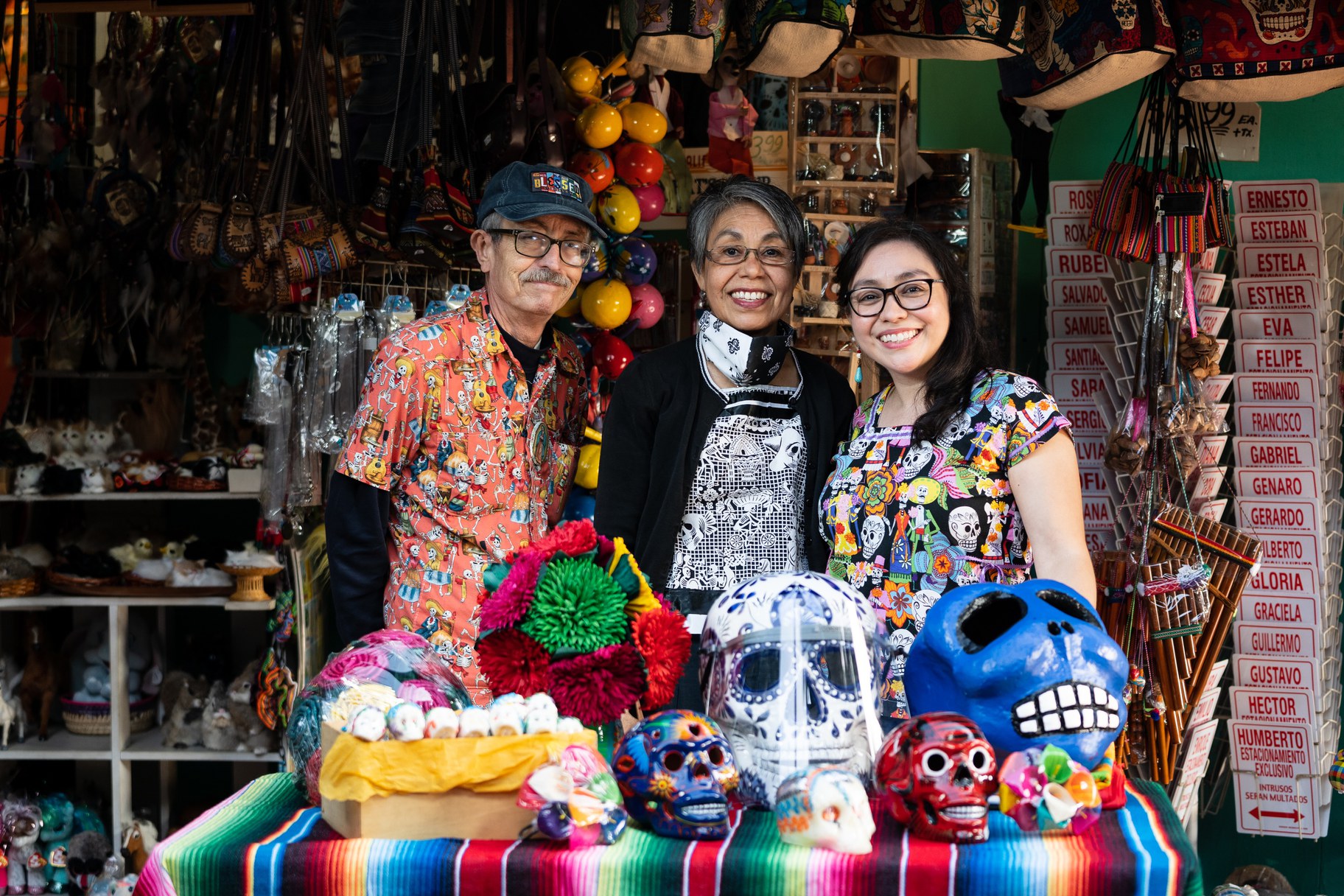 The Mariscal family — Mike, Rosa and their daughter Christina — stand in front of their family gift shop, Myrosa Enterprises. “My parents met on Olvera Street,” says Mariscal-Pasten. “They’ve been together, side by side, working, fighting, sharing life every single day here.” Photo courtesy of Christina Mariscal-Pasten.

What began as a make-believe Mexican marketplace has morphed into a true celebration of Latino culture in Los Angeles.

Local history may be an ongoing story of conquest, displacement and loss. But “Mariscal-Pasten proclaims, “We’re still here. That to me is much more significant than the tchotchke you might pick up on Olvera Street.”

Some Angelenos can ‘Breathe’ with $1000 a month, no strings attached

A new LA County program aims to combat poverty by giving 1000 Angelenos $1,000 a month for three years. Applications are open now through April 13.