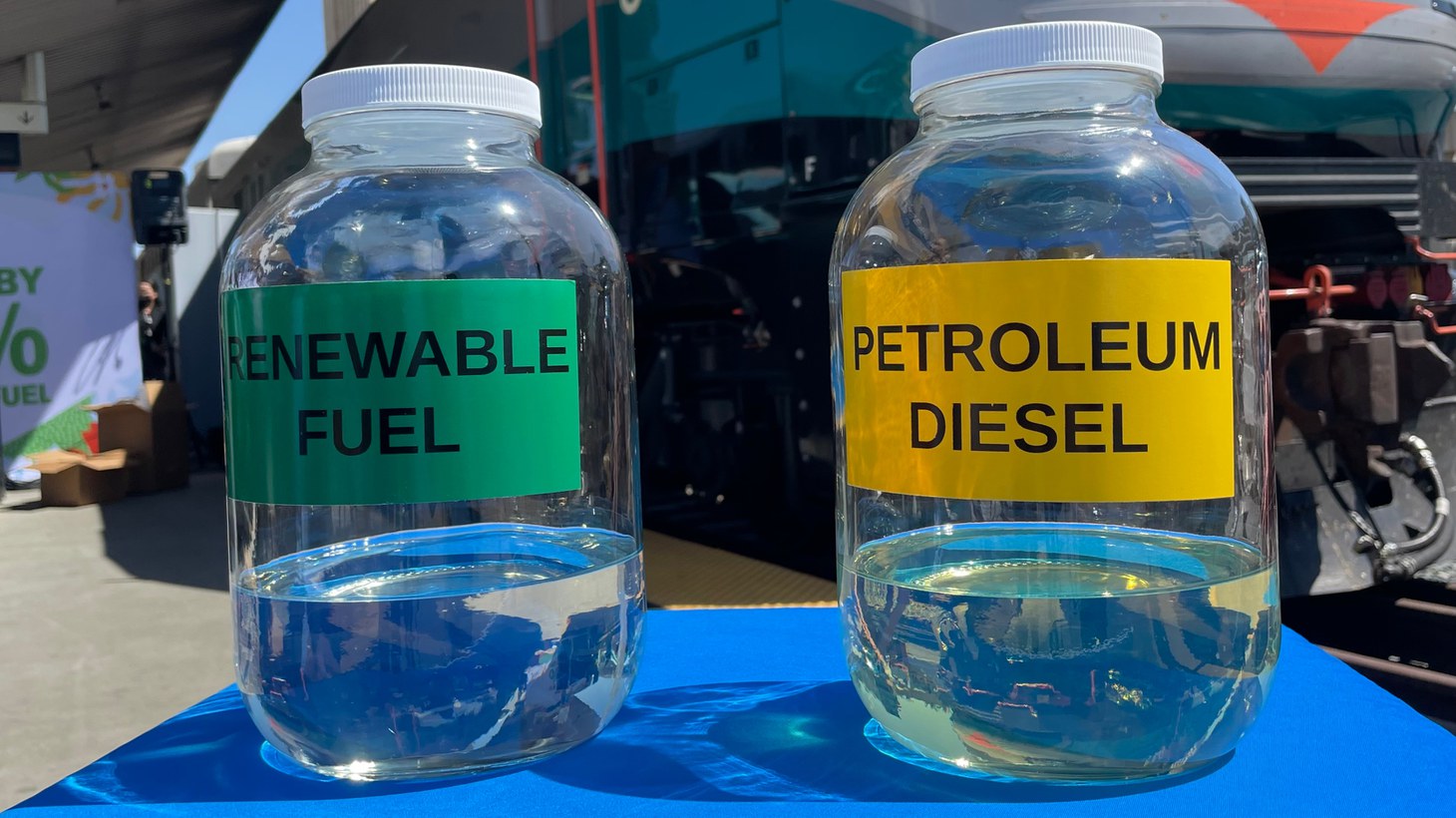 Wait a minute. What is renewable fuel?

The short answer: It is any fuel source that we can replenish. Fossil fuels like natural gas and coal are not renewable because they take eons to make. Vegetable oil, wood, ethanol, solar, wind, and biofuels are renewable because we can turn them into energy without waiting generations to harvest them.

The trains run on recycled natural oils that come from Singapore and Finland.

“When you say it's recycled, it was previously used. So it was being used mainly in cooking and food processing,” says Metrolink Board Chairman Ara Najarian. “Animal oils, animal fats and vegetable oils, that's what's collected with a little bit of refinement, and then it's used in our engines.” 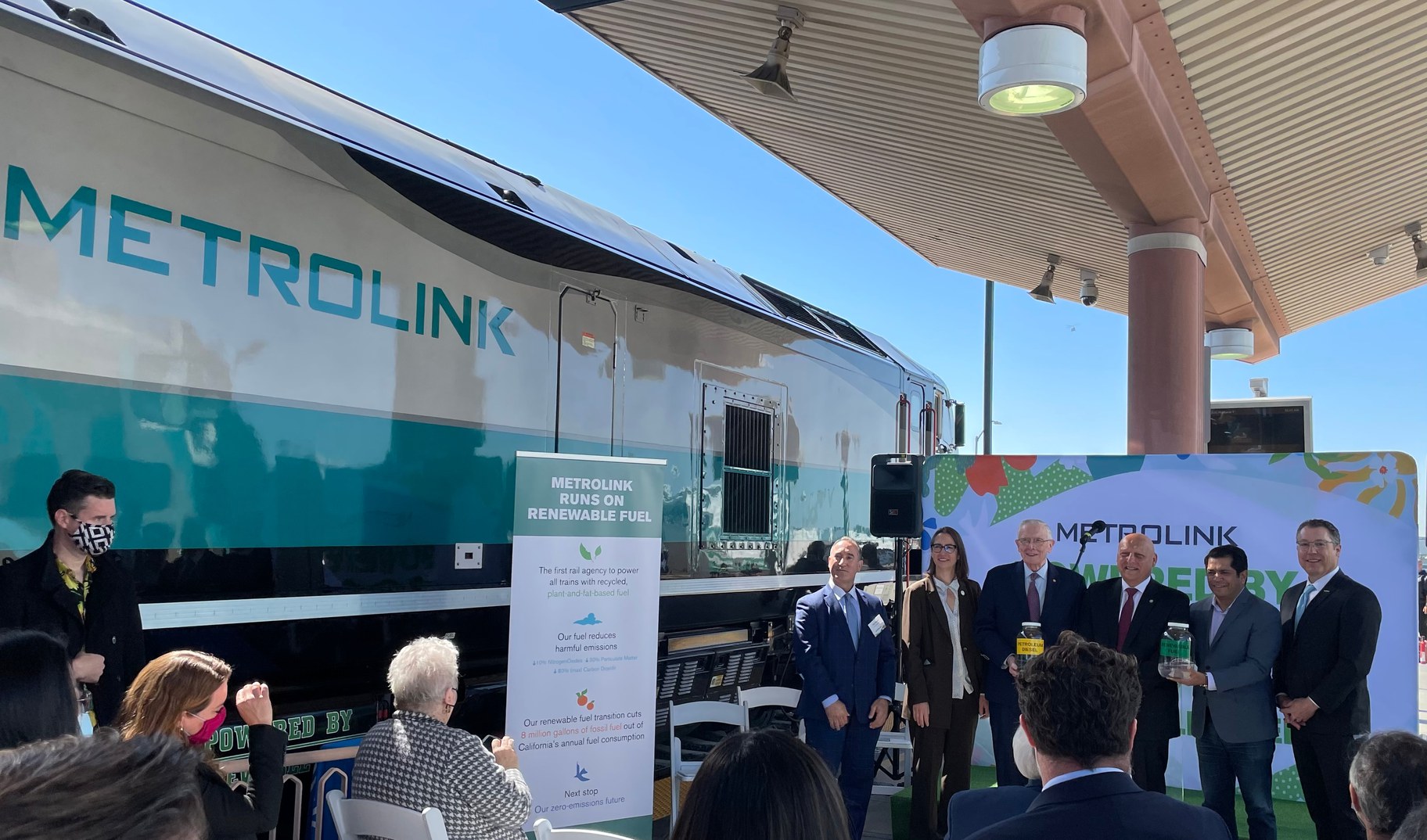 Shipping fuel across the world also has environmental consequences, but the agency says they hope to start collecting their fuel from a processing plant in California as early as next year.

Does that mean Metrolink is running sustainably?

No. Renewable energy does not equal sustainable energy. For example, burning wood is renewable because we can plant trees that will mature in a lifetime, but it’s not sustainable because it emits smoke and carbon that future generations have to breathe.

Metrolink officials say its renewable fuel will emit 30% less particulate matter and up to 80% less carbon dioxide than the fossil fuels they used in the past. That will improve air quality near the trains, but they are still burning oil and still polluting the atmosphere, so it is not sustainable yet.

“I just think it's a little bit naughty calling it ‘renewable.’ It's really more recycled or reprocessed,” says Paul Dyson, president emeritus of the nonprofit Rail Passenger Association of California. “What concerns us is that this publicity about this fuel is part of Metrolink’s policy to continue with diesel locomotives. And we feel after 30-plus years in operation, it's time for Metrolink to move on and to start using some better technology on a path to electrification.”

Metrolink says it plans to one day be completely carbon neutral, it’s just not there yet.

“Sometimes you will hear complaints that, ‘Oh, it's not electric,’” says Congressmember Jimmy Gomez, who represents communities in and near downtown Los Angeles. “But you know what? Progress is cumulative. It builds on the next advancement, the next stop. And I know that this stop is not the last, but just the next one in a cleaner, more equitable future for everyone.”

Metrolink also just bought a set of more efficient diesel-burning locomotive engines, and they want to continue to make use of them while cleaner technologies continue to be developed. Putting a new fuel into already existing engines was a fairly simple switch.

Who cares how green the trains are if nobody is riding them?

The best way to reduce a train’s carbon footprint is to make each pound of pollution count with trains full of people. Even two years after the pandemic began, Metrolink says their weekday ridership is at about 30% of average pre-pandemic levels.

The LA area has the third-largest commuter rail system after New York and Chicago by miles of track. But the average number of people in Southern California riding the train before the pandemic was less than a quarter of that in Chicago, and less than a fifth of that in New York.

Is the agency going to get more people to ride the trains, then?

“Any kind of train, whether it's even an old dirty diesel train, with 500 people on board is going to be better than a lot of people driving single automobiles,” says Dyson. “That's a given. And one of the things that we've been pointing out to Metrolink for a long time is that for almost the whole of the 30 years of their existence, they've focused on commuter pattern-type of service to and from downtown Los Angeles. In other words, taking people into town in the morning, taking them home in the afternoon. That is 1950s thinking.

“Metrolink has got to transition itself into an all day, seven-day-a-week regional carrier that you can get somewhere from early in the morning to late at night and back again.”

Dyson argues that more trains on the tracks means more people will fill them. Metrolink Board chair Najarian agrees: “We're hoping to get half-hour service between each and every one of our stations. That in itself is going to draw a huge number of commuters to our system. That is the best way to reduce emissions is to have more people more and more riding the trains.”

Metrolink is now powering its trains with recycled natural oils from Singapore and Finland, which it says will cut carbon emissions by up to 80%. But that doesn’t make it...