A view from Boyle Heights shows the new Sixth Street Viaduct and its view of downtown Los Angeles. Photo by Zaydee Sanchez for KCRW.

Six years after construction workers demolished the landmark Sixth Street Bridge that connected Boyle Heights to downtown LA, the replacement bridge is now coming into focus, and it promises to be a graceful and dramatic structure when it opens in  fall. 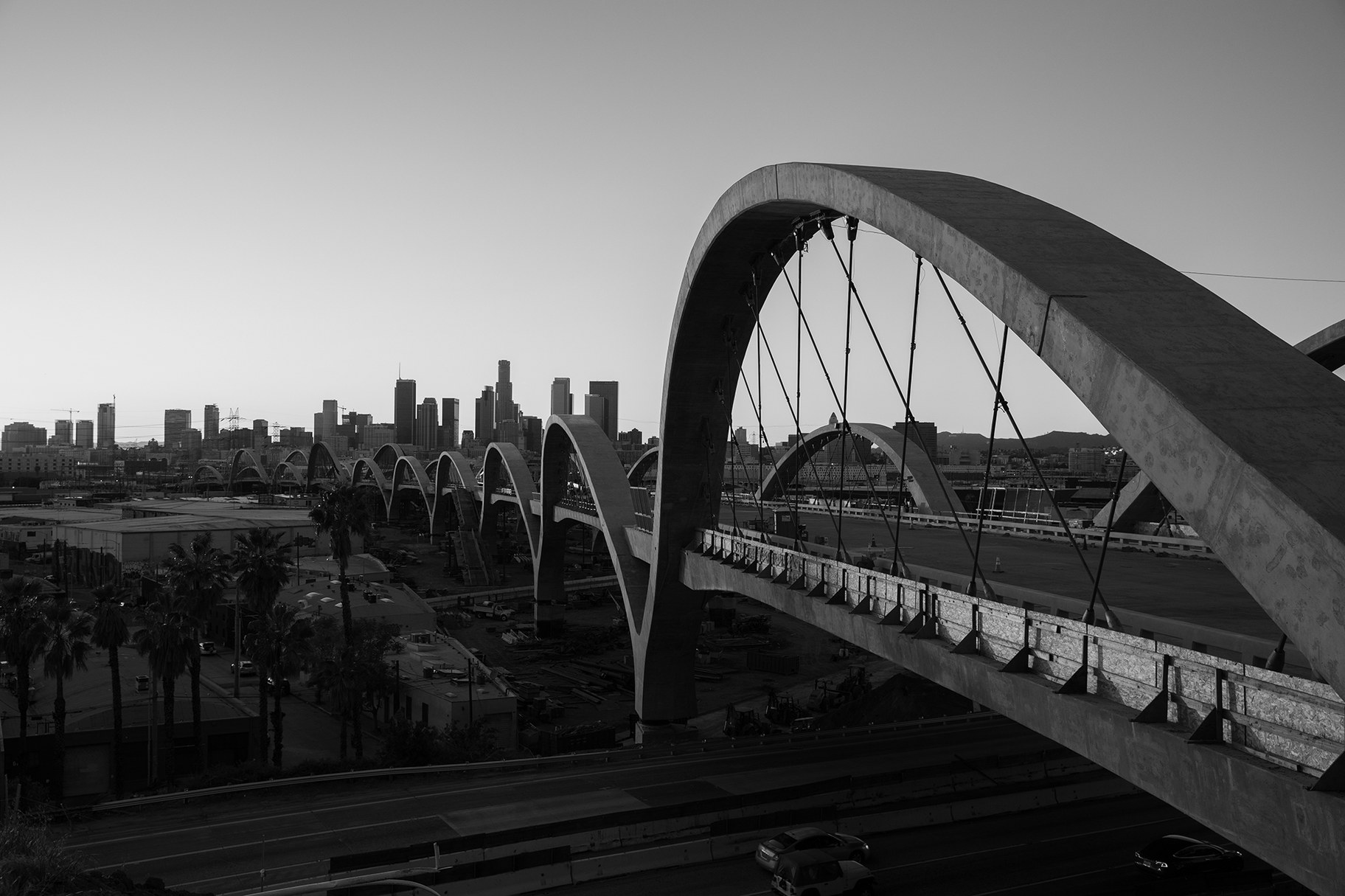 The view from Whittier Boulevard in Boyle Heights shows the bridge in all its glory, with 10 pairs of arches that will be lit up at night. Photo by Zaydee Sanchez for KCRW.

The architect Michael Maltzan and engineers HNTB won the commission to build the viaduct with a design that promised to be architecturally spectacular, and provide amenities not usually associated with large bridges, like bike lanes and parks, for the communities at each end.

“The bridge is really meant to be a civic armature, to turn infrastructure into something that weaves together the city … [and] connects communities,” Maltzan says. 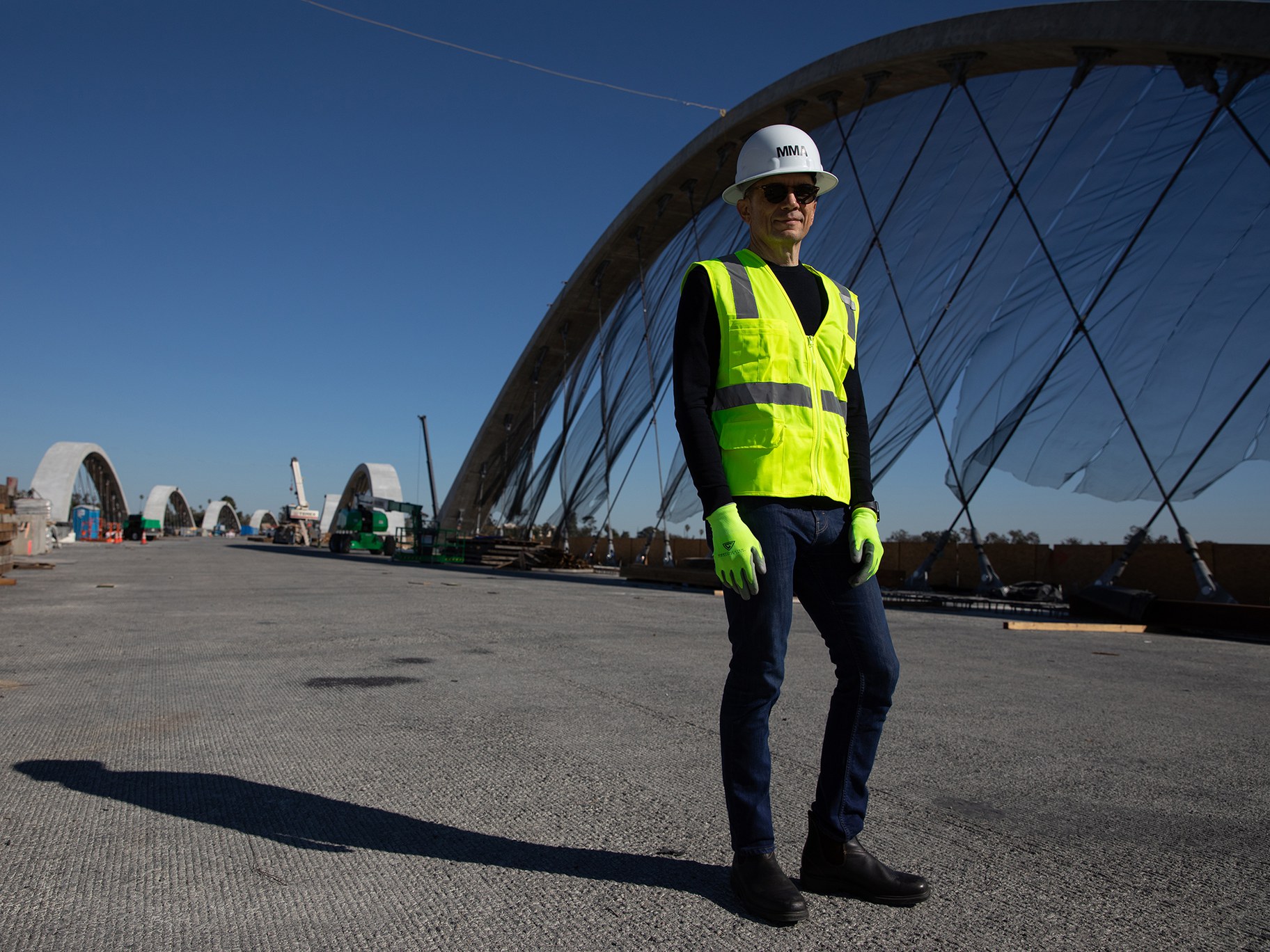 Michael Maltzan, project architect, says it is a joy to witness the near-completion of the bridge after “many different engineering challenges, structural challenges, design challenges.” Photo by Zaydee Sanchez for KCRW.

The old Sixth Street Viaduct, designed by Merrill Butler and built in 1932, was a beloved landmark that suffered for many years from “concrete cancer” that weakened the pillars. That bridge, the star of many a movie including “Grease” and “Terminator 2: Judgment Day,” had two pairs of distinct columns – rounded arches with vertical supports. The replacement has 10 pairs of arches in different heights and each spanning around 300 feet. They lean away from the bridge, heightening a sense of openness.

The new structure is substantially larger than the old: 3,500 feet (about two-thirds of a mile), 100 feet wide and 60 feet off the ground at its highest point. It curves, creating a sense of length and changing views of the bridge itself, of downtown, and views beyond to Chinatown, the heights of Boyle Heights, and up to snow capped mountains out East. 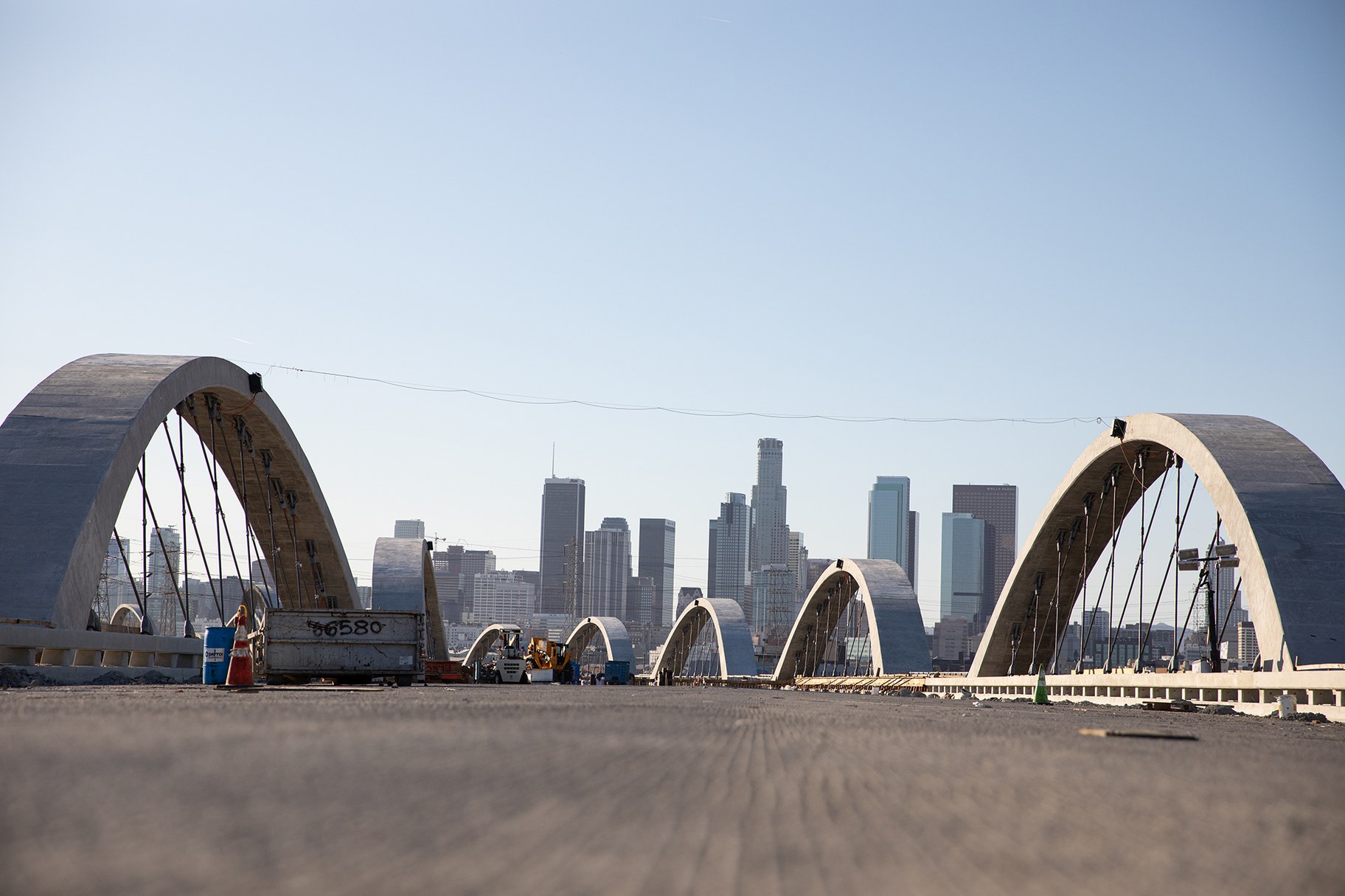 The western view from the new Sixth Street Viaduct shows downtown LA framed by the leaning arches. Photo by Zaydee Sanchez for KCRW.

The architect Michael Maltzan believes the bridge will be both something to look at, and to look from. “It's really going to be an observatory,” he says. “It gives you a different image, a different picture, a different view, a different vantage of the city that you think you know very well.” 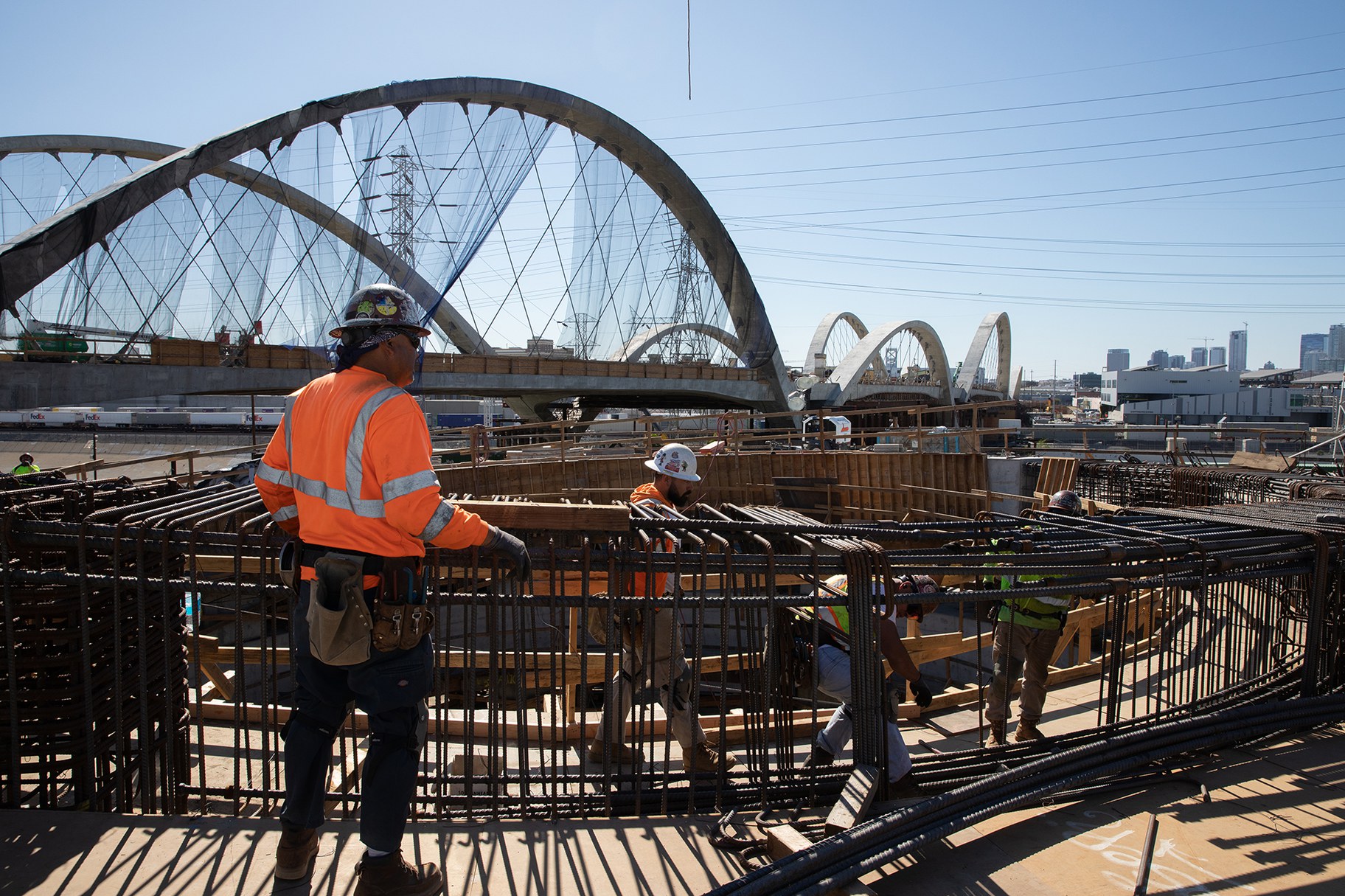 The concrete arches, held in place by high tension cables in a “network tied arch structure” appear to leap towards downtown, visible from the helical ramp. Photo by Zaydee Sanchez for KCRW.

Engineering the new bridge, which cost $588 million, also took place on a grander scale than the old. Where the historic bridge had two pairs of distinct arches, this has 10 sets – 20 in total – held in place by criss-crossing, high-tension metal cables called a “network tied arch structure.” To withstand earthquakes, all the columns are base-isolated – meaning they are not fixed to the ground but are placed in oil in a bowl, like a pestle and mortar, says the architect – and can move six feet in any direction. 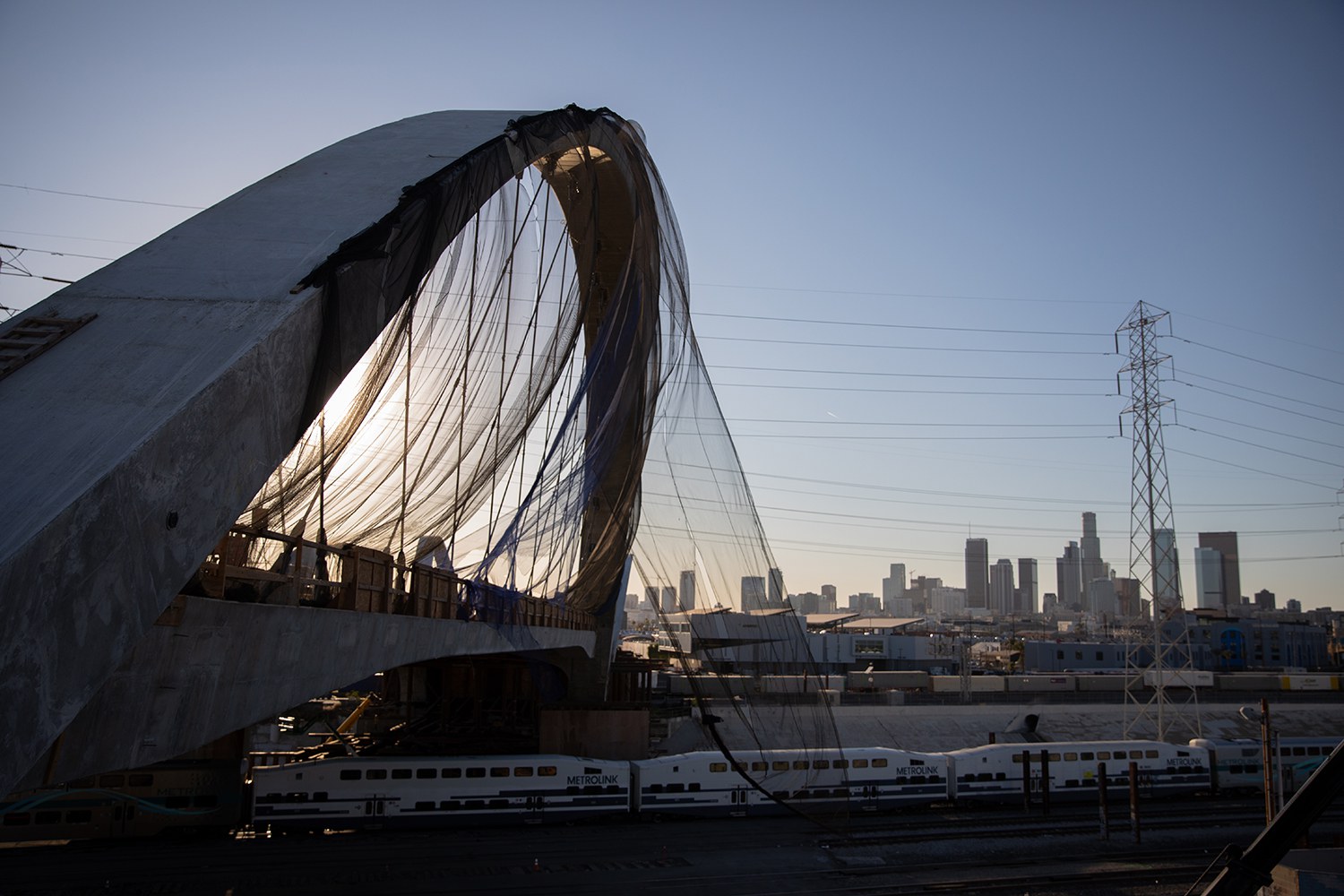 The protective netting on the arch will go but the trains will remain. The bridge leaps across railroads and the river. Photo by Zaydee Sanchez for KCRW.

Moreover, the structure had to fit in and around existing infrastructure: two highways, four different railroad tracks, and it crosses the LA River. It also goes under two sets of high-tension power lines that serve the surrounding downtown area. So the project involved intense coordination among LA’s vast bureaucracies – a tricky engineering in its own right. 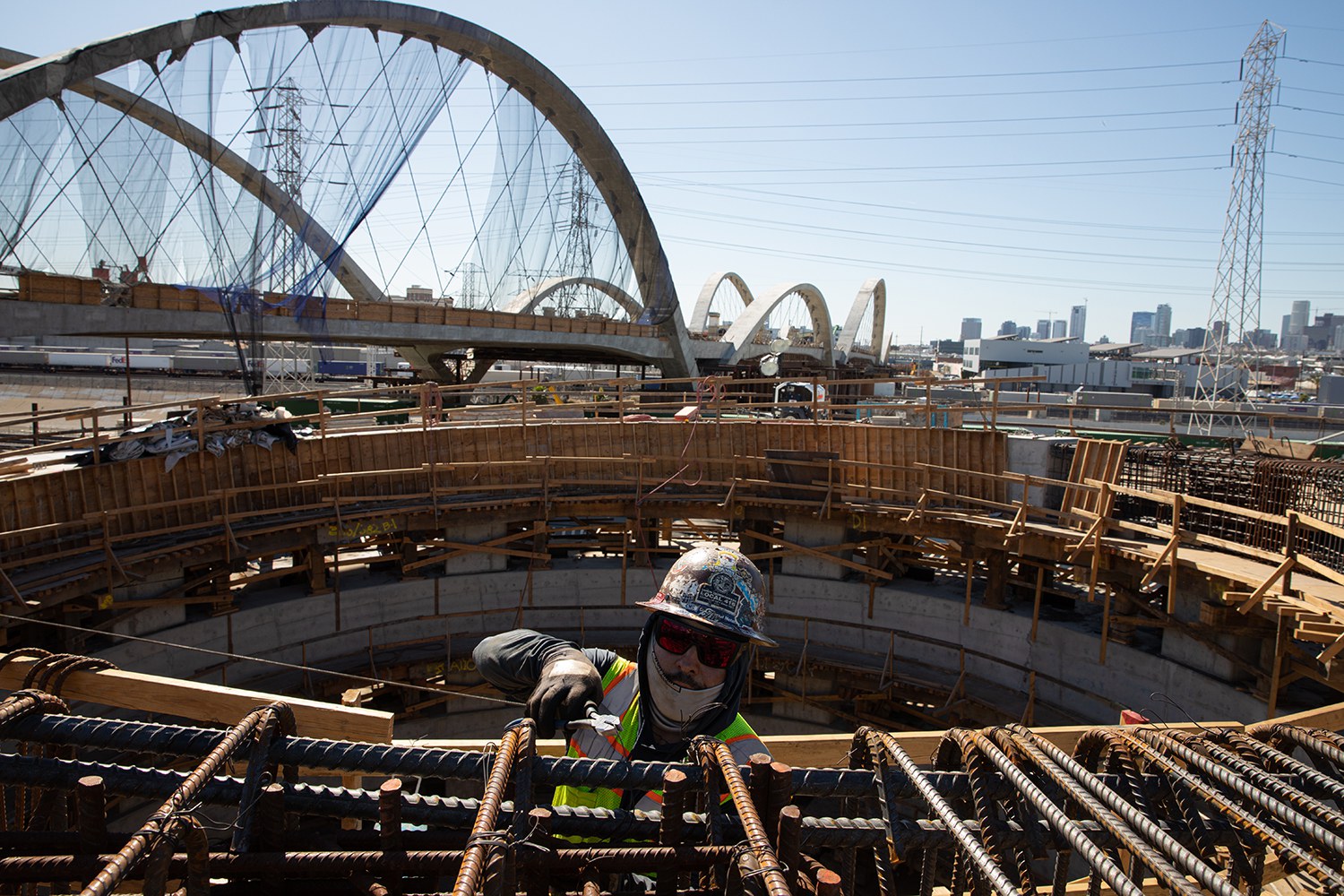 A worker fixes a rebar on the helical, or spiraling, concrete ramp for cyclists and pedestrians, connecting the ground to the bridge. Photo by Zaydee Sanchez for KCRW.

The bridge is not just a bridge. Once it opens, construction will start on public playing fields, gathering areas, green spaces and a dog park at the foot of the bridge on the Boyle Heights side, and a performance stage and green spaces on the Arts District side. And cyclists can gear up for the fall unveiling of a 10-foot-wide bicycle lane going both directions on the bridge, which they can access from the bike lane at the river via a steep spiraling ramp. It is a ride that will take some energy.

“You have to put in a bit of an effort to earn the climb, absolutely,” says Maltzan, a keen cyclist himself. “If you're going to be king of the mountain, you have to do a little bit of work.” 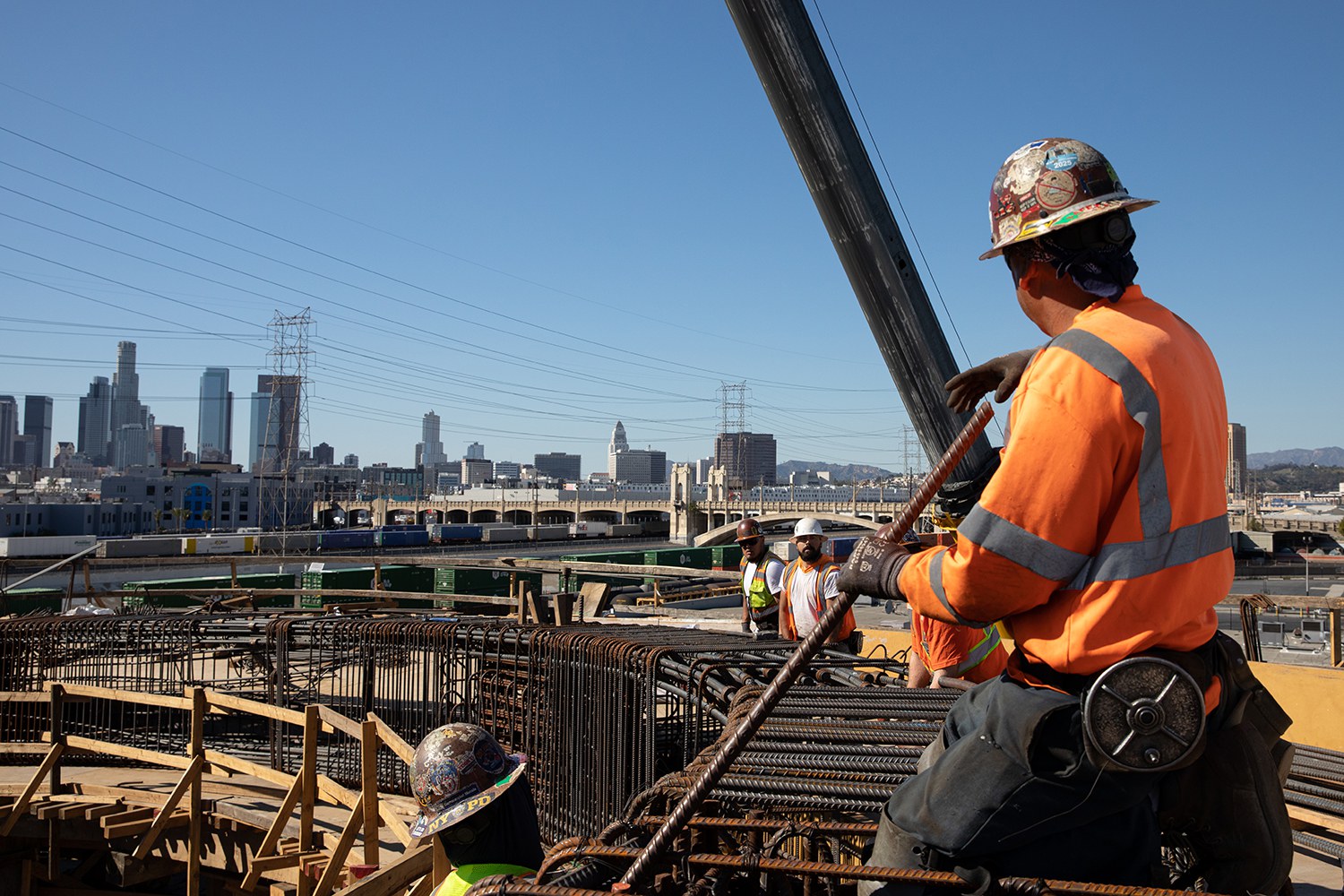 Workers wrestle rebar into place on the ramp, to provide strength to the concrete structure. Photo by Zaydee Sanchez for KCRW. 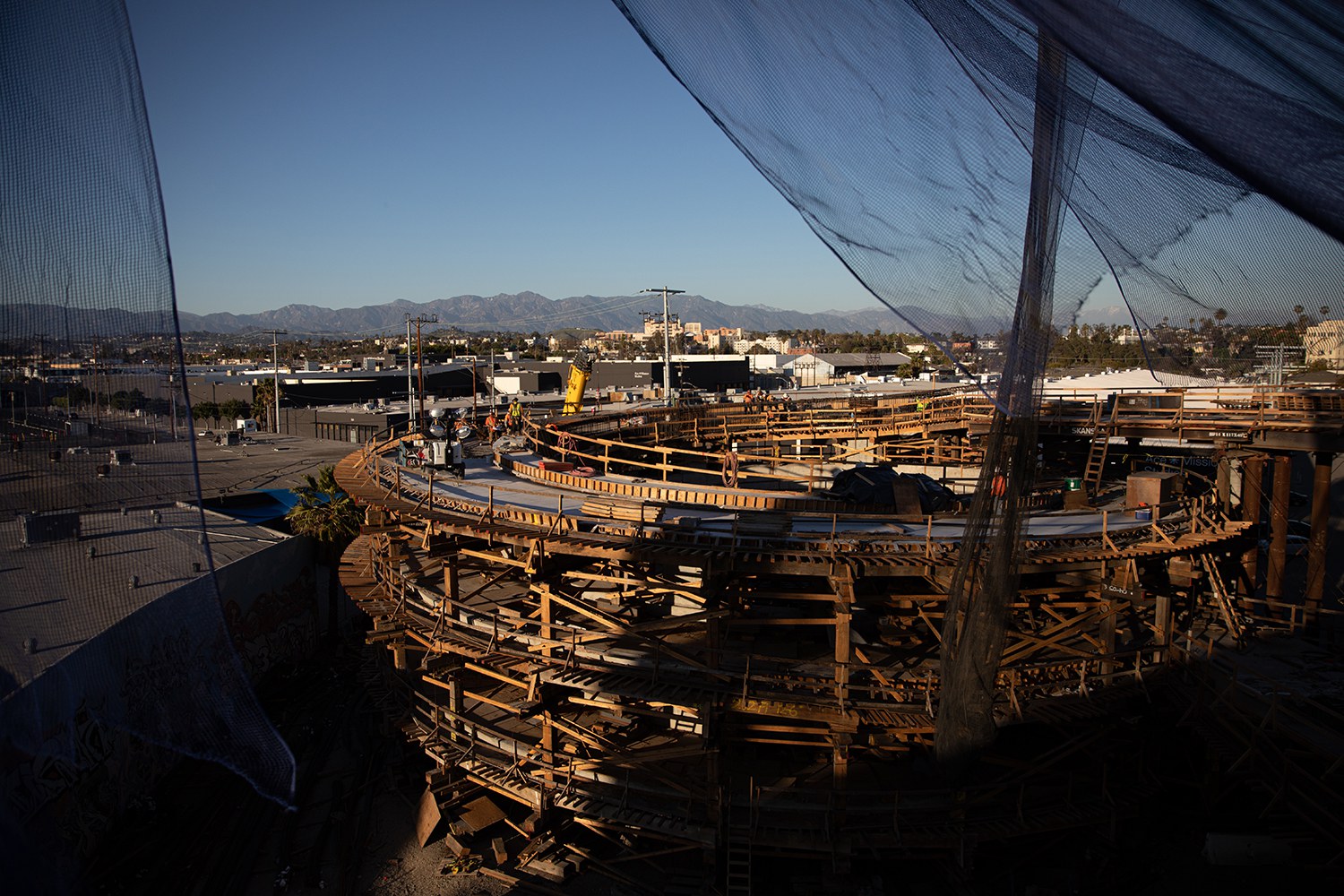 View from the bridge of the helical ramp and the San Gabriel Mountains beyond. Photo by Zaydee Sanchez for KCRW.