Hundreds of unhoused people have died across LA County this year. Photo by Amy Ta.

It was late morning at Echo Park Lake. Andrew Kettle sat outside his tent talking to his friend Katria Kirby, who goes by the nickname Lady Bliss. Suddenly, Kettle went pale and started sweating profusely. He told Bliss he thought he was having a heart attack. Bliss dialed 911. While they waited for paramedics, Bliss recalled, Kettle became so sweaty that it looked like someone dumped a bottle of water over him.

Two hours later, Kettle was dead. He was 51 years old, and he was the 566th person to die homeless in Los Angeles County this year. In the six weeks since he passed away, nearly 50 more people have died unhoused, according to the county medical examiner-coroner’s office.

On average, three people die homeless in LA every day, a number that has increased dramatically in recent years. That’s not simply because more people live on the streets, according to Paul Simon, chief medical officer for the LA County Department of Public Health. Homelessness is also getting deadlier.

“If you actually account for the increase in the homeless numbers, the actual rate of mortality in that population is going up, which suggests that being homeless is becoming increasingly hazardous to your health,” Simons said.

What’s harder to quantify is the cruelty of these deaths — the simultaneously lonely and public ways they often happen. Andrew Kettle died by himself in a tent in a busy park in the middle of the day. 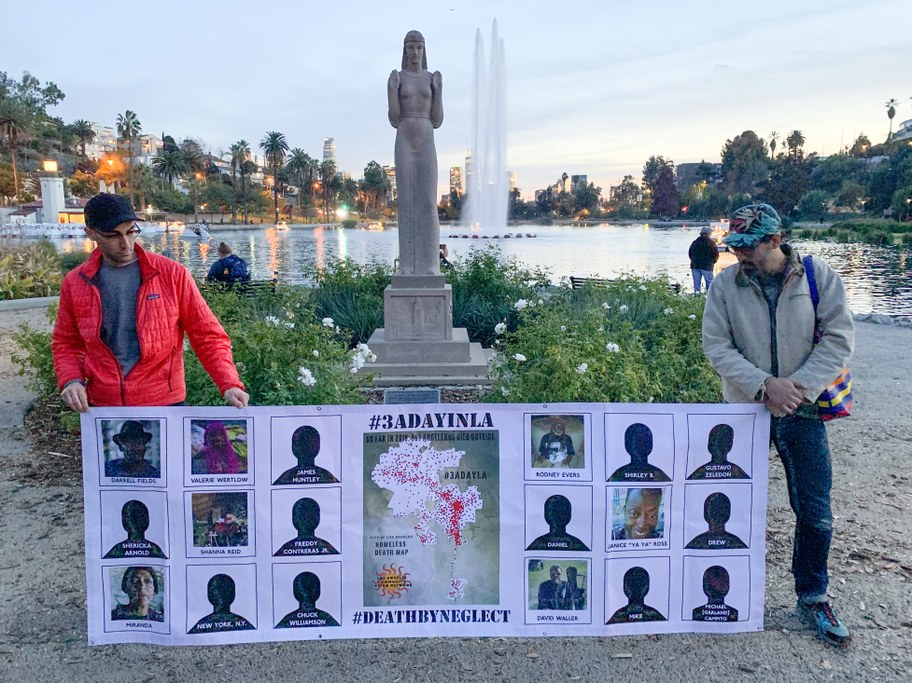 Activists at a 2019 vigil for people who died homeless in LA last year, near the spot in Echo Park where Andrew Kettle died six weeks ago. Photo by Anna Scott.

“Homeless people disproportionately die alone,” said Bob Erlenbusch, executive director of the Sacramento Regional Coalition to End Homelessness, who has studied mortality among the unhoused. “They're invisible while they're alive, and they're invisible when they die.”

Long before Andrew Kettle ended up in a tent on the north side of Echo Park Lake, he was a Grateful Dead-loving guy from New Jersey. One of his oldest friends, Jim Druzbacky, said Kettle came from a comfortable but not wealthy background and that his dad worked as a bartender.

“He was just a devil-may-care guy with a good heart that ended up in a bad place,” Druzbacky said. He described Kettle as outgoing and goofy, a talented guitar player who loved animals. Kettle also struggled with his mental health. At some point he was diagnosed as bipolar, Druzbacky said, and self-medicated with alcohol.

Over the years, Kettle worked as a landscaper, a roadie, a dog groomer. He did some jail time for drug and alcohol-related offenses, Druzbacky said, and moved to LA earlier this year to live with friends. That situation didn’t last, but when Druzbacky and Kettle last spoke in May, Kettle was housed. He was working as a caretaker for an elderly man. Then, Druzbacky said, the calls stopped. When Druzbacky learned about Kettle’s death, he said, “It felt like a piece of me had gone with him, you know? I don't have that many friends. And not many friends that I've known that long.”

When Kettle went from living indoors to outdoors, his risk of dying increased. Last fall, the county health department put out a study that found the number of homeless deaths doubled in the five years between 2013 and 2018, along with an increase in mortality rates during that same period. Simon, the department’s chief medical officer, said the stress of living unhoused and poor health care access are just two of the reasons homelessness cuts life expectancy. Homelessness also exacerbates challenges like mental illness and addiction, he said.

For people currently experiencing homelessness, the pandemic has taken away some places to access running water and services, like libraries and gyms. At Echo Park Lake, where there’s a large and long standing encampment, some advocacy groups have helped fill the gaps. That could be part of what attracted Kettle there, his friends said.

Jed Parriott, an organizer with Street Watch LA, met Kettle at a phone charging table his group set up for residents of the park. Parriott remembered Kettle as “a positive, warm, funny person.”

Bliss, Kettle’s friend and neighbor, said Kettle was in his addiction at the time of his death and had used meth the night before. But a little before midday on June 16, he was clear headed as they chatted. Then his symptoms began. When paramedics arrived, Bliss said, they had trouble taking Kettle’s blood pressure because of his shaking. Paramedics told Kettle to calm down, according to Bliss, but did not offer a ride to the hospital.

“They didn't really ask him anything except for you know, ‘what's wrong, what’s going on?’” Bliss said. “They asked him if he did drugs, and he said no, and I just kind of kept quiet.”

Fire Department spokesman Peter Sanders said the department is conducting an internal investigation to see if paramedics followed proper procedures. The department couldn’t provide any other details about the case because of privacy restrictions around medical information.

Bliss said that Kettle told paramedics he was an alcoholic and had been drinking the night before. According to Bliss, officials at the scene advised Kettle that he was experiencing alcohol withdrawal and needed to “sleep it off.” After they left, Kettle went into his tent to lay down. Bliss doesn’t know if Kettle consumed any alcohol or substances there. Approximately an hour later, Bliss opened Kettle’s tent to check on him. Bliss, who prefers plural pronouns, found their friend already stiff, with his hands on his chest and his eyes open. Bliss jumped out of the tent and called 911. Then they called Parriott from Street Watch.

“When I showed up, the first thing I saw was six police officers,” Parriott said. “And they were standing around next to a white sheet that was covered over Andrew's body, right there in broad daylight at the park on a beautiful day.”

Bliss and Parriott say Kettle’s body remained like that for more than an hour, waiting for officials with the county medical examiner-coroner’s office to arrive. Meanwhile, oblivious park-goers snapped photos in front of the ducks nearby.

“People walking [sic] by as if it was nothing,” Parriott said.

Kettle was one of three people to die homeless in LA County that day. As of July 27, 615 people had died unhoused since the beginning of the year.

Why homelessness in LA is getting deadlier

As of Monday, 615 people have died unhoused since the beginning of the year, and on average, three people die homeless in LA every day. That’s according to the county public...

Coronavirus cases and hospitalizations in LA have been increasing since the economy reopened in May. According to the county’s public health department, LA County hospitals...

Huntington Beach is a hotspot for people who are skeptical of coronavirus and masks.