In “Buy Nothing” groups, neighbors offer used goods for free. Some may leave them outside for porch pick-up. Image by Mike Royer/KCRW.

Amelie Gustafsson and Laurie Daniels are two masked strangers, meeting up for a socially-distanced exchange of their belongings, free of charge, with no strings attached.

For Amelie, a bracelet. For Laurie, wire storage shelves.

They met on Facebook, in their neighborhood “Buy Nothing” group, which is exactly what it sounds like: neighbors offering their half-used bag of rice, or their couch, or their toddler’s outgrown clothes. The only rules? Don’t give away anything illegal, and everything’s free.

KCRW’s series Wasted has explored new and innovative ways to deal with waste — from packaging, to greenhouse gas emissions, to poop. But what if the most effective solution to waste is also the least innovative? 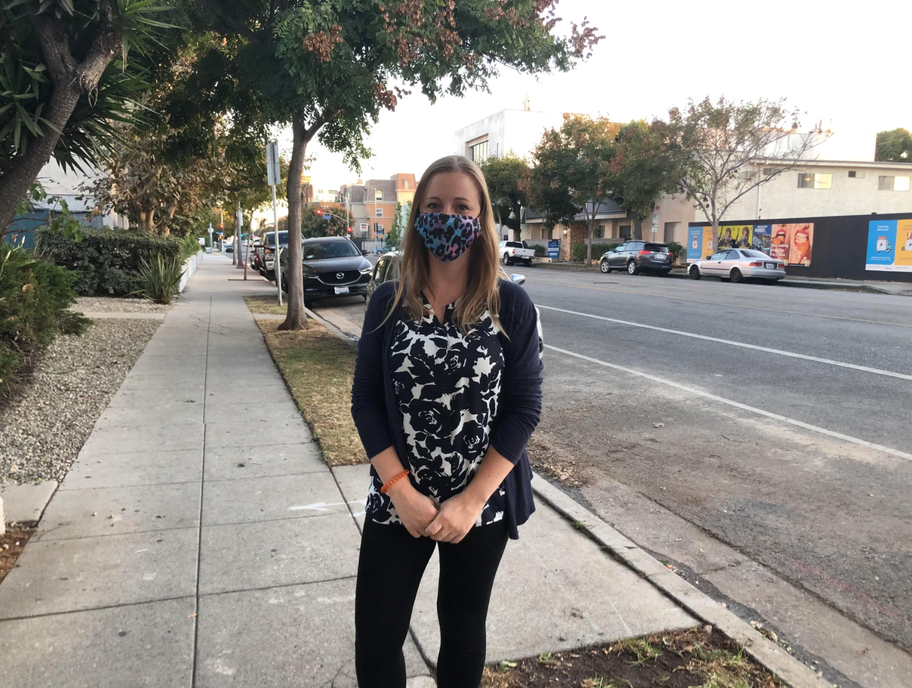 Amelie Gustafsson says her “Buy Nothing” group has made her more careful with her things, knowing they’ll some day be repurposed. Photo by Caleigh Wells

Liesel Clark and Rebecca Rockefeller are both moms in Seattle, and 12 years ago they started swapping supplies as they each raised their own two children. And that got them thinking.

“We asked ourselves: Could we try an experiment here where we asked neighbors to buy nothing?” says Clark. “Can we stave off production of plastics, and can we encourage people to ask people within their community for those items that they would otherwise be going to the nearest box store to purchase?”

Their “Buy Nothing” effort is a classic example of one person’s gently-used trash becoming another’s greatly-appreciated treasure.

In Southern California alone, there are now more than 360 active chapters and more than 1.5 million members in thousands of groups across 30 counties.

“It might be the stuff that brings you into these groups, but it’s the people that keeps you there,” says Clark. “That’s where the magic happens, [the] weaving of a web community gets tighter and tighter. And the communities become more and more resilient. And then you look around and you realize we can do a lot with this.”

The most common stuff exchanged in these “Buy Nothing” groups are durable goods like clothes, furniture, appliances, and other things meant to last. In the U.S., we toss nearly 350 pounds of it per person per year. And that’s nearly six times worse than it was 60 years ago.

That’s why groups like these are trying to change all this waste. And the people doing it know it’s not a new idea.

“It’s kind of an old-fashioned thing. Kids were asking, ‘Is this a revolution?’ Yes and no. Yes we’re doing something that’s very counterculture, we’re not just throwing things away. But no because this is what people used to do on a regular basis. They would always repair things and never throw them away,” says Michelle Weiner of the “Buy Nothing” group in Culver City.

Weiner also organizes something called the Westside Repair Cafe. A few times a year, people file in with torn clothes, broken toasters and bent jewelry clasps, and get them fixed for free by community volunteers, like Kim Hudson. 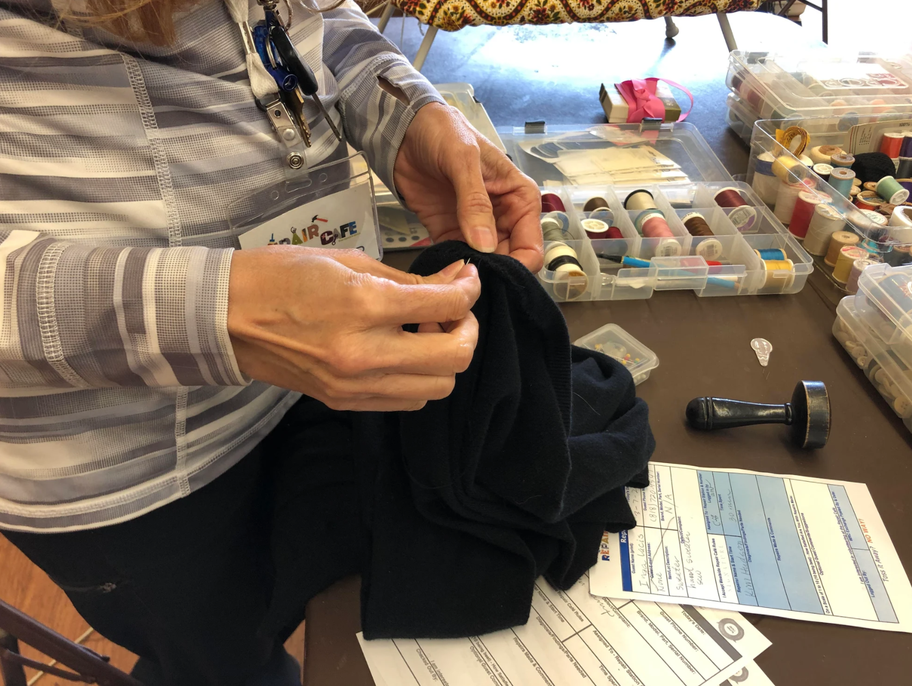 “I’m hand-sewing a sweater. The collar was damaged and coming apart, and now a person will get more life out of it,” Hudson says. “My main purpose of this is to keep things out of the landfill. Because the amount of clothing that this country wastes is just unbelievable.”

Michelle Shea was inspired by her local group to create an entire operation while she’s been working at home during the pandemic. She calls it the “Buy Nothing Boutique,” and she runs it out of the spare guest room in her apartment.

Almost every day, she has a couple of neighbors file into her apartment and drop off a bag of clothes, or “shop” for something “new.” All free, of course.

“We’re upcycling clothing, we’re reusing it, we’re reducing landfill waste. People are always excited to get new-ish things, even though it’s not brand new clothing, it’s new to them. So I feel like that’s a good way to be environmental,” Shea says. 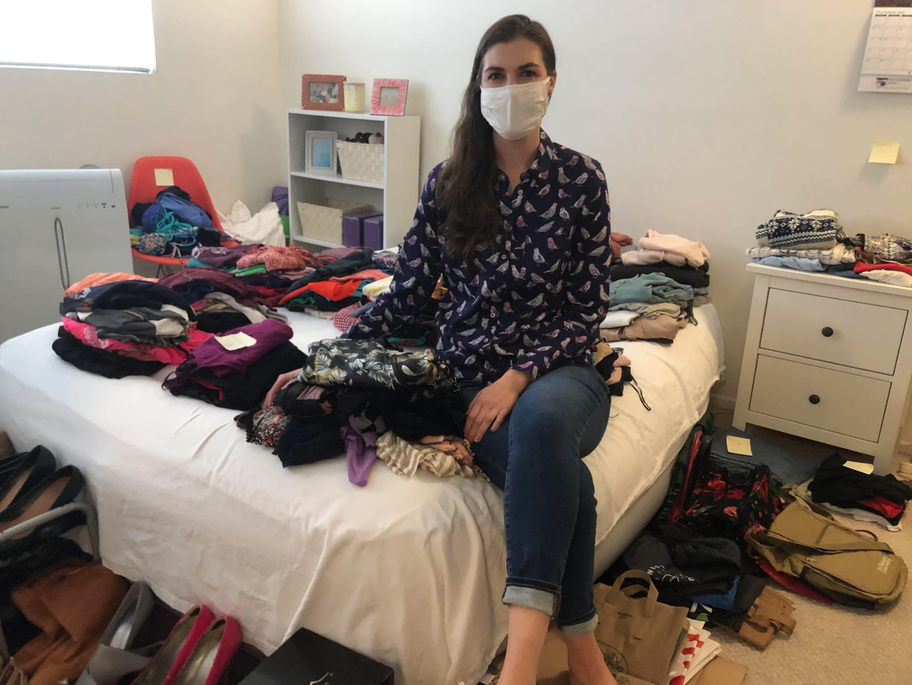 Michelle Shea has started collecting used clothes from her neighbors and allowing people to come browse the selection in her spare bedroom. She calls it the “Buy Nothing Boutique.” Photo by Caleigh Wells

Amelie Gustafsson joined her local “Buy Nothing” group a year ago. And she says since then, it’s inspired her to start treating her stuff differently. “I take care of things even more now because I know I want to give it to somebody else.”

Michelle Shea has seen the same trend. “The mindset is contagious because it’s all about giving. … It snowballs into people wanting to be more giving and generous.”

Adam Minter, who studies global waste and is author of the book “Second Hand,” is in a “Buy Nothing” group in Malaysia. He says this challenge to consumerism is a step in the right direction.

“These kinds of exchange groups, I think, are incredibly beneficial. Are they sufficient? Will they solve the problem? No, there is always going to be the need to buy more stuff. Things wear out,” he says. “[But] this desire to reduce consumption by trading things is a wonderful step forward.”

This is the final installment of KCRW’s “Wasted” series.

A global movement of people are popularizing one of the oldest methods of conservation: reusing, repurposing, and regifting.

Across LA, many offices, industrial warehouses, and strip mall units have been sitting empty as people are working from home during the COVID-19 pandemic.

"He was a stickler and was always put together. He was always very fastidious. He was the tough guy. We had a difficult relationship, but we loved each other," says Gene...