A “happy Valentine’s Day” sign hangs outside a business in downtown Culver City. Even during a pandemic and the age of social distancing, some people are still trying to find love, and some are successful. Photo by Amy Ta.

The last thing on Britt’s mind before the pandemic was settling down. She was an attorney by day, and spent nights going out to bars, hanging with girlfriends, and meeting new guys.  (KCRW isn’t using her full name because she’s concerned her employer will find out about her pandemic dalliances.)

So when COVID-related lockdowns hit, it only took her about three weeks to get back onto the dating scene.

“Once I realized that this was a permanent state of being, it was like, ‘Okay, my life may stop, but my libido cannot. I need to continue trying to find a partner,’” she told KCRW.

Dating apps like Hinge and Bumble became a social life preserver for the 36-year-old divorcee. It enabled her to meet men from all around LA when she couldn’t go out and meet them the old-fashioned way.

“When I’m ovulating, I'll be out at the grocery store, judging men entirely by their eyes and trying to make eyes at them,” she said. “You can't pick people up in person, aside from the fact that you can't go anywhere.”

It was the inability to go anywhere that spelled trouble for Britt, forcing her to get creative when finding COVID-safe date spots. After a few FaceTime dates to help screen out unsafe dates, she met guys at the beach, drive-in movie theaters, and even a grocery store parking lot.

“When somebody's house is the only option, you have to get creative and come up with something else. So we had a date in the tailgate of my car out in a Ralph's parking lot,” Britt said. “We ended up slow dancing in the parking garage nearby to Frank Sinatra that he played on his cell phone. It was a very COVID date.”

She even invited a select few to her apartment. But that led to awkward encounters. “It's like you get him back to your house, and they get their dicks out. It’s like, ‘Oh it must be dick out time.’ No! It's not dick out time, we’re just at my house!”

At first, swiping on hot singles was fun, until the duration of the pandemic sank in.

“Just dating somebody because they’re interesting? You don’t have that leeway anymore. It’s just not available,” Britt said. “Normally you were waiting to date the boring, perfect guy when you're ready to get married, because you still want to go out and have fun and like #HoLife. And there is no #HoLife right now.”

At the beginning of the pandemic, Britt met a fellow attorney who she initially considered too boring. But these days, he’s looking more attractive by the minute.

“I've had a lot of time to sit at home and think [about] how many premieres the guy would go to and what kind of places he could get me into. How fun is it going to be to hang out with this guy? … That's not as important now because there's nowhere to go,” she said. “It's really just more about stability now. If you're stable enough to make it through a pandemic, you're stable enough to father my baby.”

While the pandemic has led to life-changing family planning revelations for Britt, the turmoil has provided time for introspection for others, vis a vis online dating and pandemic situationships.

That includes 27-year-old Drew Gregory. After a big breakup in 2019, she spent a lot of her time pre-pandemic casually dating. Two years after coming out as trans, she was just trying to figure it all out, including herself. 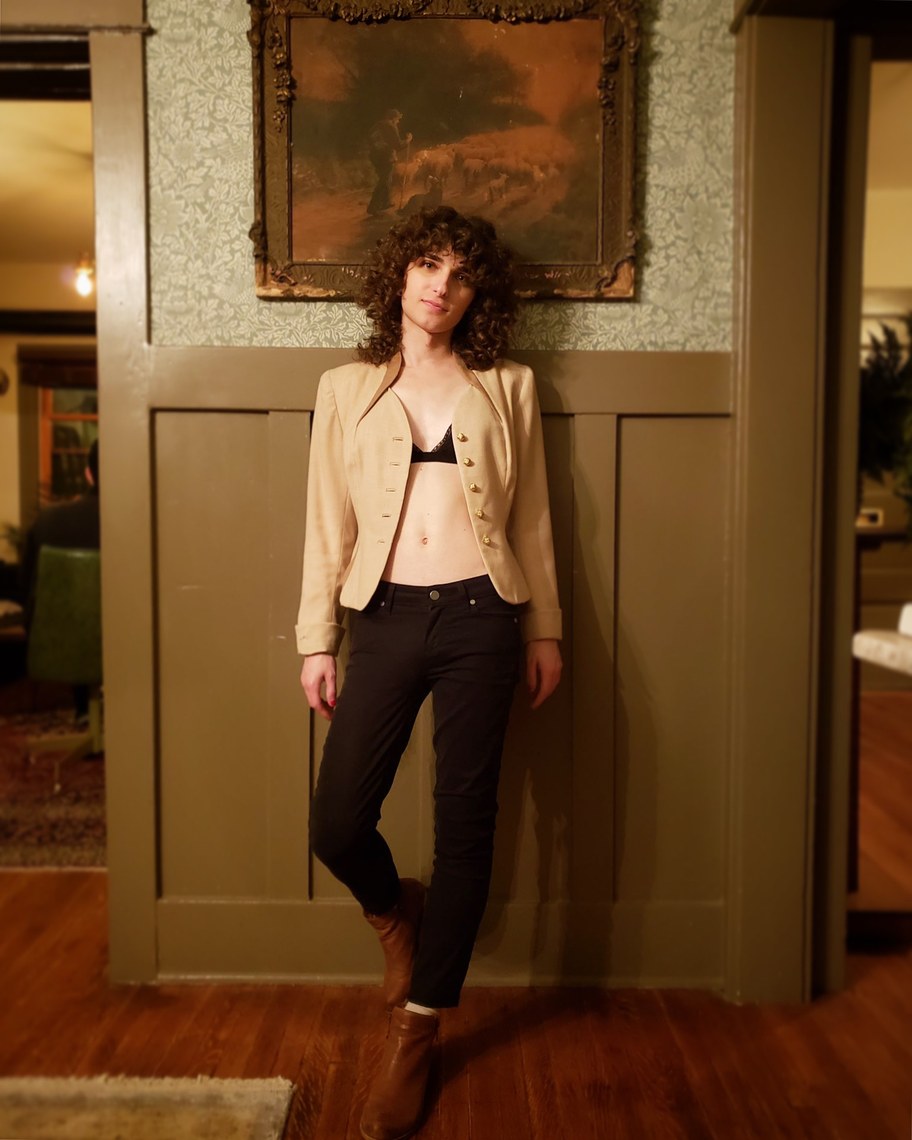 The pandemic served as a time of self-reflection for Drew Gregory, while she figured out who she was. Photo courtesy of Drew Gregory.

The pandemic forced Gregory’s social life online, leading to a brave new world of dating. “Initially, when I was dating and flirting with people, there was this ‘Oh cool, I can talk to people from all over. It doesn't matter, because we're all isolated anyways.’”

Typically, she enjoys lots of physical intimacy in a relationship, but without it now, she’s forced to reevaluate how she bonds with others.

“I don’t know, maybe having a four-hour Zoom call where literally all you’re doing is staring at each other’s face is intimate in a different way.”

Like Britt, the allure of stability has started to present itself. Gregory realized she might even be ready for another serious relationship.

While folks like Britt and Gregory cautiously eye the brave new world that is serious relationships, some have fallen in love with reckless abandon.

So in true rom-com fashion, here’s one happily-ever-after story for this pandemic Valentine’s Day.

“You never realize how alone you are until it's the end of the day, and you got a bunch of things you want to say, but no one to say it to,” Wise said. “You can call your friends out. But there's that connection with a partner. I remember calling up my buddy, Luke. And I was just like, I'm lonely.”

Luke recommended Wise check out dating apps. At first, the ambivalence was real. Pre-pandemic, 35-year-old Wise was a work-fixated bachelor who wasn’t ready to commit.

“This sounds so LA, but my therapist would say I was emotionally unavailable. Dating was pretty low on my priority list. It was a lot of Mrs. Right Now, instead of Mrs. Right.”

That was until he met his now-girlfriend, who is a producer on KCRW’s Greater LA. She doesn’t want us to share her name.

The two met on Hinge in July. And a few FaceTime dates and STD and COVID tests later, they went on their first in-person date.

“When we met, I remember driving over to her spot, thinking about the great things I was going to say,” he said. “ She comes out and she was gorgeous. My heart leaps everytime I see her open the door. The first thing I said to her was, “See I'm not catfishing you.’ She's like, ‘Ah, great, Okay.’” 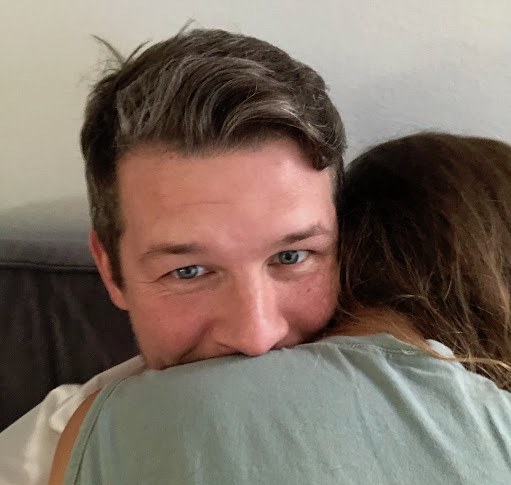 Kyle Wise with his girlfriend on the day they met in-person. Photo courtesy of Kyle Wise.

Seven months later, Wise and his new girlfriend are in it for the long haul. They’re even making plans to try for a baby this summer.

The pair have talked about the alternate reality where a pandemic didn’t happen, and whether they would’ve seriously committed if they had met under different circumstances. Wise chalks it all up to serendipity and that it took a pandemic to meet Mrs. Right.

“When I sleep over there and her head is on my shoulder and the dog’s head is on the other shoulder ... I don't want to be anywhere else,” he said. “This is coming from the guy who loves to travel, never stopped running [and] never stopped going, going, going. To sum it all up, I think COVID simplified things and put things into perspective on what's really important.”

The last thing on Britt’s mind before the pandemic was settling down. She was an attorney by day, and spent nights going out to bars, hanging with girlfriends, and meeting...

Love letters for those behind bars

Thousands of Angelenos, and others across the state, love someone who is currently behind bars. Inmates have not been able to visit with their partners, as prisons and jails...

How animals in the concrete jungle are dating in the wild

Pandemic or not, animals are going to find a way to get down and procreate. Whether it’s a mountain lion braving a Southern California freeway to find a mate or snails...