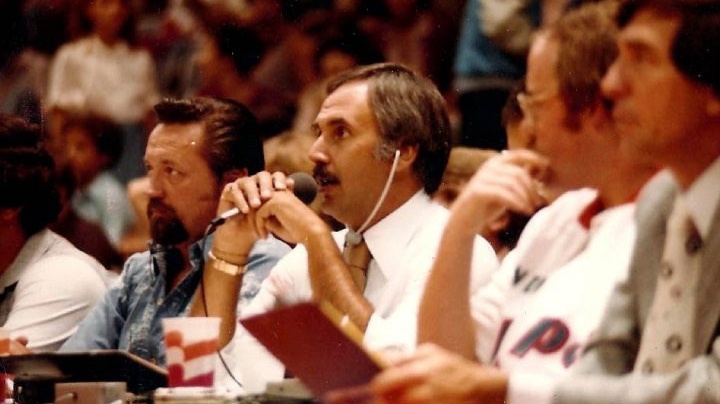 Ralph Lawler was the voice of the Clippers for 40 years. Photo courtesy of Ralph Lawler.

Ralph Lawler, whose new memoir is called “Bingo!,” got his start as an announcer in the NBA in the late 1970s and stayed with the league until retiring in 2018. For most of his tenure, he was the voice of the Los Angeles Clippers, a team that even he admits “seldom rose to mediocre status.”

Still, Lawler developed a strong sideline persona that kept fans tuned in. In the 1970s, he adopted the catchphrase “Bingo,” based on player Bobby “Bingo” Smith. But he says it “became a descriptive term to describe anybody making a three-point play.”

Even with his energetic calls, no one could deny the Clippers’ lackluster abilities. Lawler lays much of the blame on disgraced former owner Donald Sterling. He writes in the book: “No professional sports team was … so poorly run as the San Diego/Los Angeles Clippers under the tight-fisted supervision of Donald T. Sterling.”

In 2014, a recording was released of Sterling making racist remarks at his then-girlfriend V. Stiviano. Lawler was quick to condemn his long-time boss.

“We all knew there were problems with this man and his dealings with his fellow human beings, and with tenants at his apartment buildings, and even with his players and employees in the organization. But it was like our dirty little secret. This put it all out there for the whole world to see.”

Sterling was banned from NBA ownership and forced to sell the team, leaving Lawler and then-coach Doc Rivers to shepherd the Clippers through this difficult period. While Lawler was the public voice of the team, he credits Rivers for his internal leadership at this time. “He somehow … made us realize it was okay. We're gonna get through this somehow, some way.”

In the aftermath, former Microsoft CEO Steve Ballmer bought the team and helped renew its potential. Lawler describes the stark contrast between the two owners. “​​Balmer was a joy. I just wish he'd bought the team 10 years earlier.”

The Ballmer years proved much more fruitful. According to Lawler, “I think no team in the league has a longer string of winning seasons than the Clippers do, which is kind of a surprising statistic for most people to hear. They're good, and they're good for as many years as we can see looking ahead.”

In his 40 years with the Clippers, Lawler had quite the streak himself. In honor of his accomplishments, a number of NBA superstars wrote segments for his new book. “Chris Paul was a part of the book writing an introduction for it, and Doc Rivers wrote the afterword, and Bill Walton would have written all 320 pages if we hadn't put the brakes on him, but he wrote quite a foreword.”

So now that he’s retired, what does Lawler hope to see the Clippers accomplish? “​​What we have to do is win 18 championships because then we'd have one more than the Lakers.”

Ralph Lawler was the LA Clippers’ announcer for 40 years. Now he’s calling shots from the sidelines in a new memoir.