“This is my safe zone, right here,” he says, pointing to a map of his property. Then he reaches into a tub of firefighting equipment. “This is how you crank the fire hydrant open to get it to work properly.”

Kotler has lived in Malibu his whole life, and he’s a DIY kind of guy. He drives a giant pickup truck with a skull and crossbones sticker on the back. His mastiff, Blue, follows him while he wanders around the house he designed himself at the western tip of Malibu.

And in 2018 when the Woolsey Fire threatened to wipe it out, he stayed to fight the fire. He was armed with a firehose in one hand, and his phone camera in the other.

In a series of videos he took that day, he says, “House of Kotler, hanging on tight, not letting loose yet. … It’s real now. House has caught on fire a couple times and we put it out.”

As climate change makes western wildfires more frequent and more intense, people like Kotler who choose to live in fire-prone areas are getting more creative to keep their properties from burning. That includes everything from fire-resistant landscaping, less flammable home design, and fire hydrants in the driveway. It might work now, but there might still come a day when these neighborhoods are no longer inhabitable. 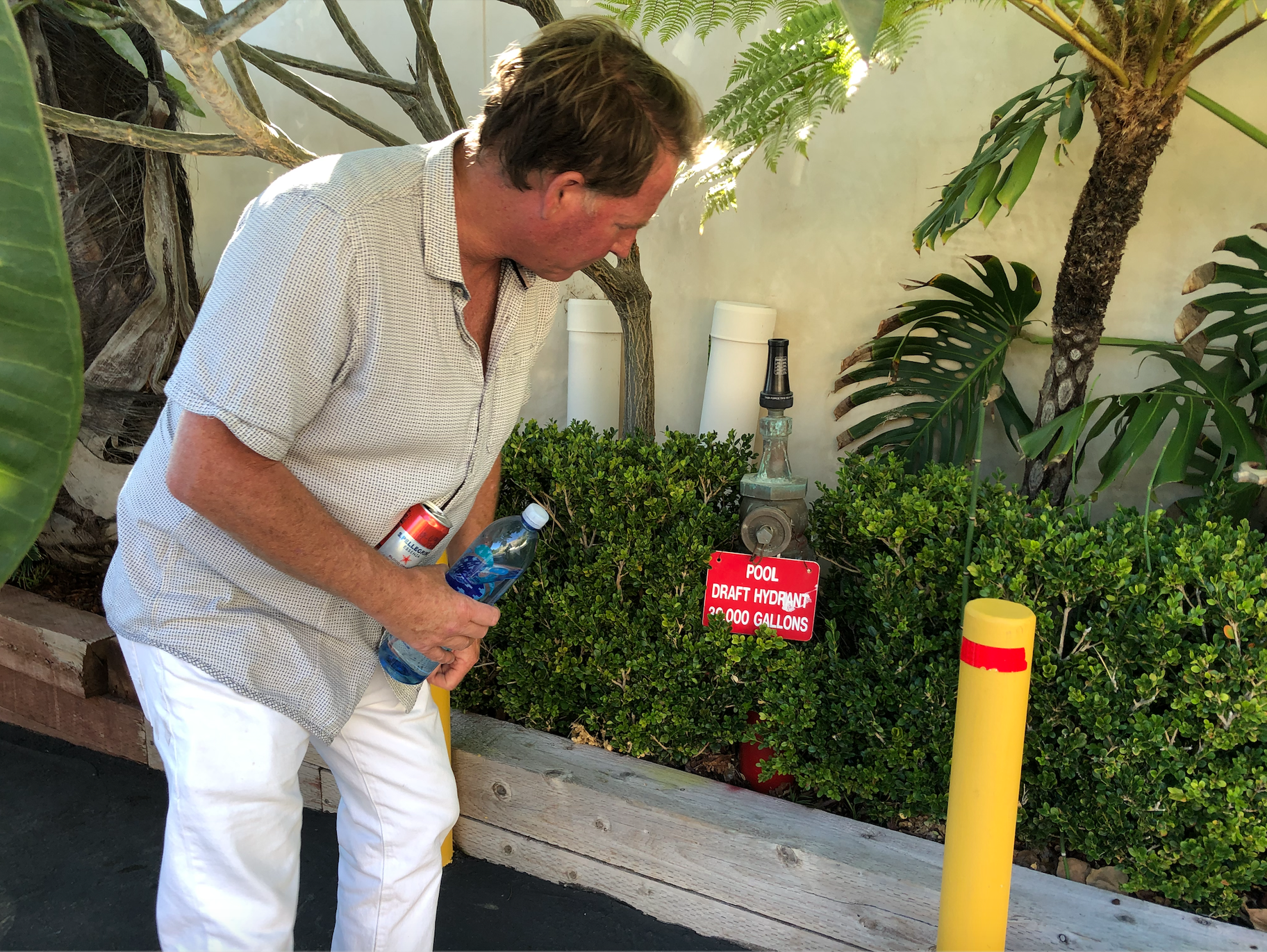 Malibu homeowner Kirby Kotler points out one of the fire hydrants that connects to water sources on his property. Photo by Caleigh Wells.

The fire hose Kotler used that day attaches to a hydrant in his driveway, which pumps water from his 75-foot swimming pool. He says without it, his house wouldn’t have survived the Woolsey Fire that burned 100,000 acres here three years ago.

In the end, he used about 25,000 gallons of water to save his house — as much as 50 fire trucks can carry. Most of it he got from the pool, but he also used two enormous tanks he installed in his backyard just in case.

“You can call me stupid. You can call me irresponsible, but I call myself prepared. I'm not gonna leave. I get it — is your house worth dying over? I would say in a heartbeat no, but I don't see myself dying here,” he says.

He feels safe because he built his house with wildfire in mind. He has stucco walls, aluminum around the sliding glass doors, and stainless steel railings for his balcony.

He takes the cushions off his outdoor furniture whenever Santa Ana winds come through. And he has 150 feet of landscaping between the house and the hillside. 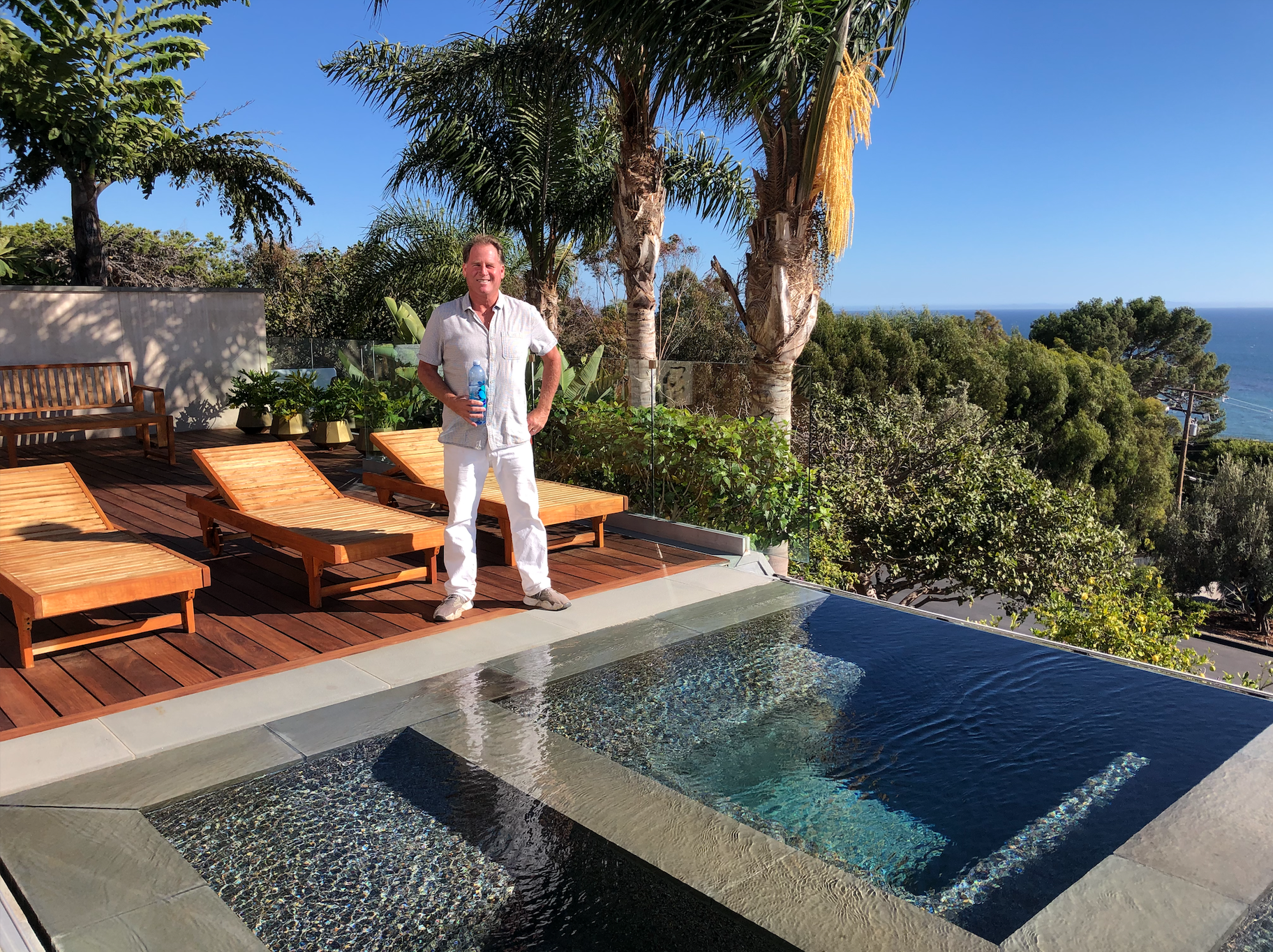 Kirby Kotler removes the cushions on his outdoor furniture when there is a high risk of wildfire. Photo by Caleigh Wells.

“It's all ultra lush green. You could put a lighter to it and it wouldn’t burn,” he says. “The next 10 feet is grass and stone. The next six feet is a concrete wall.”

These fireproofing investments might be affordable for someone who can build their own home in Malibu, but they’re out of reach for most residents of California’s rural fire-prone areas. Kotler pays a couple thousand dollars every year to lease those fire hydrants. And he says he pays another $5,000 every few years to trim his neighbor’s eucalyptus tree and prevent it from becoming a fire risk. He also has a gardener to handle landscape maintenance.

That’s not an option for most people.

Take the design and construction of new campus buildings at the Ojai Valley School, for instance. Trevor Behner, design project manager with Frederick Fisher and Partners, says the budget was already tight to build a new science center before the school lost two other buildings to the Thomas Fire in 2017. 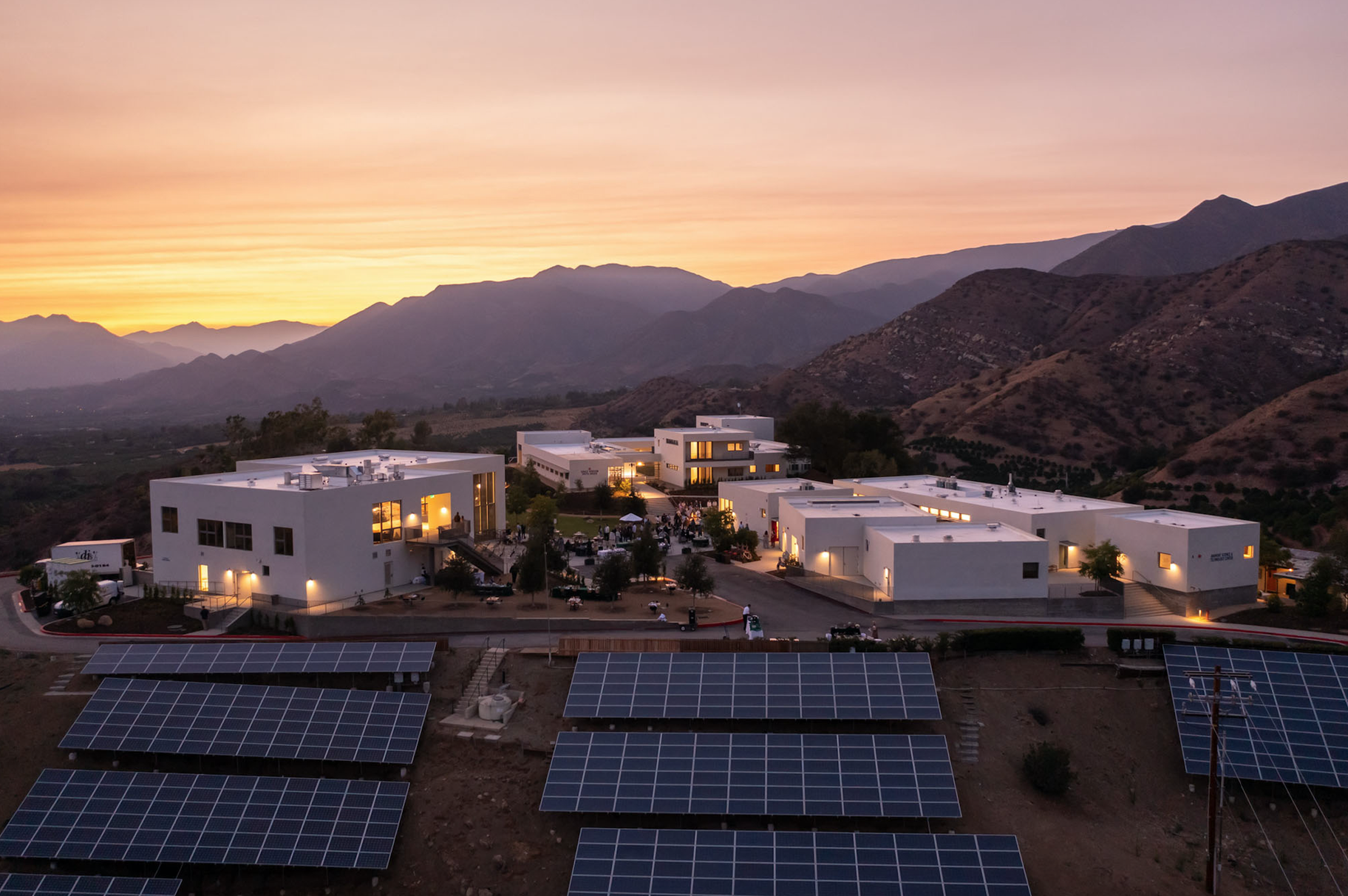 “Basically none of that kind of stuff was in the budget,” he says. “So it's just common sense. What's the best we can do with what we have?”

On the new buildings, the trellises are aluminum, there’s no wooden deck, the trees are trimmed and several feet from the buildings, the roofs are flat, and they don’t have eaves. 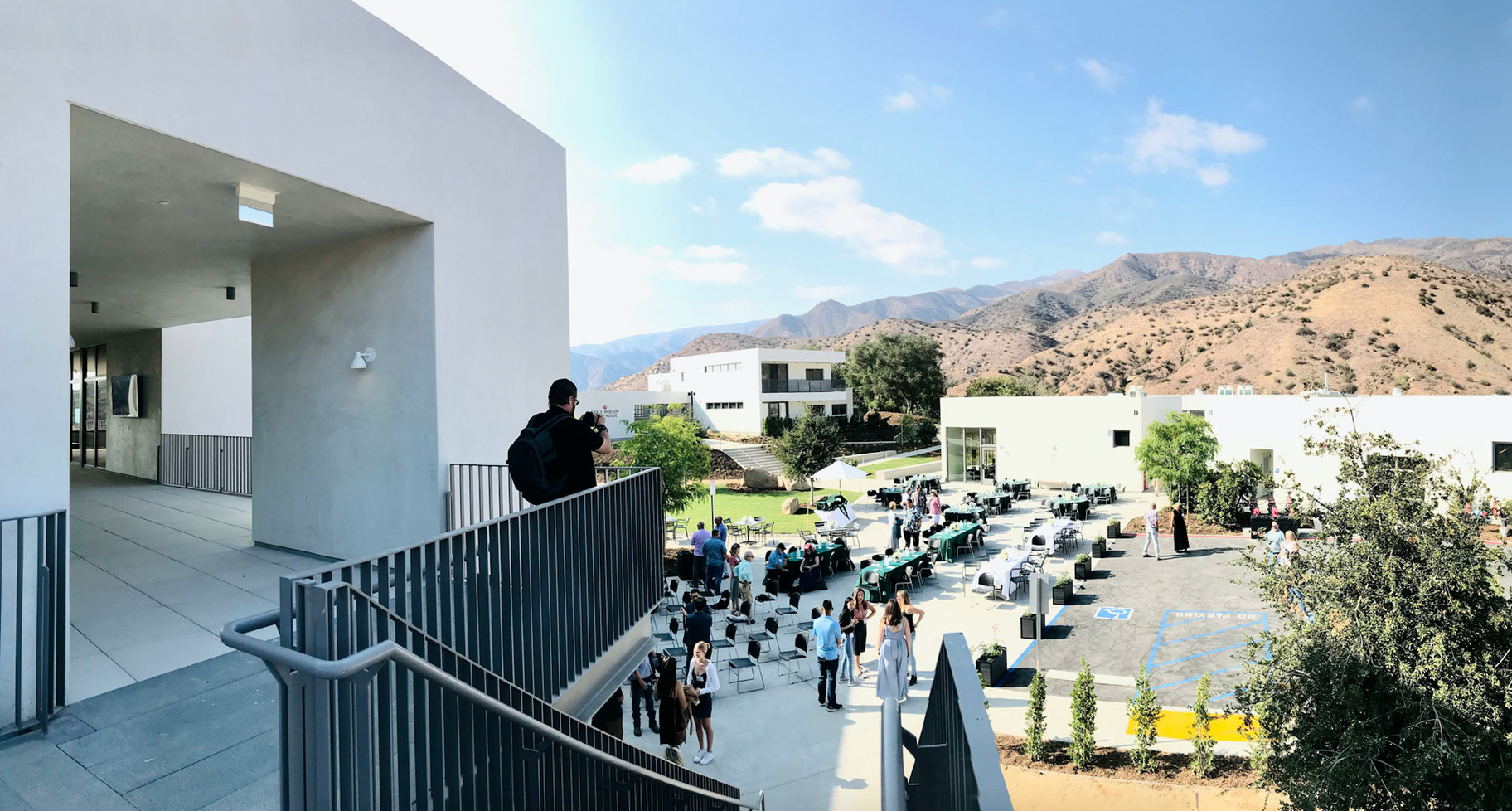 The buildings are made with stucco and metal and have flat roofs to lessen the chance that it burns in wildfire. Photo by Logan Hall for Ojai Valley School.

Behner says the good news is the new, more fire-resilient design wasn't more expensive to build. And he says if embers hit these buildings, they likely would not burn down.

“First off, we just try not to give them a place to land by getting rid of the eaves and using flat roofs and all that. And if they do land, they have nothing to ignite,” he says.

Lead project designer Takashige Ikawa has built houses in fire-prone areas with that same model in mind. It might be safer, but he’s not surprised it hasn’t caught on just yet. He says people still prefer a more traditional design: “Especially in California, Venice Beach, [there are] a lot of the beautiful, cute, pitched-roof houses.”

Local governments have cracked down on building restrictions in fire-prone areas. For instance, some roof materials aren’t allowed, and driveways need to be wide enough for a firetruck.

Fire-resilient design choices might help, but as the climate warms and fires get worse, it’s not enough to ensure that fire-prone areas will continue to be livable. Ikawa isn’t sure what that means for his future business there.

And no matter how resilient the property is, homes in some areas can never truly be fireproof. That’s the reality Katie Arnoldi has come to terms with. 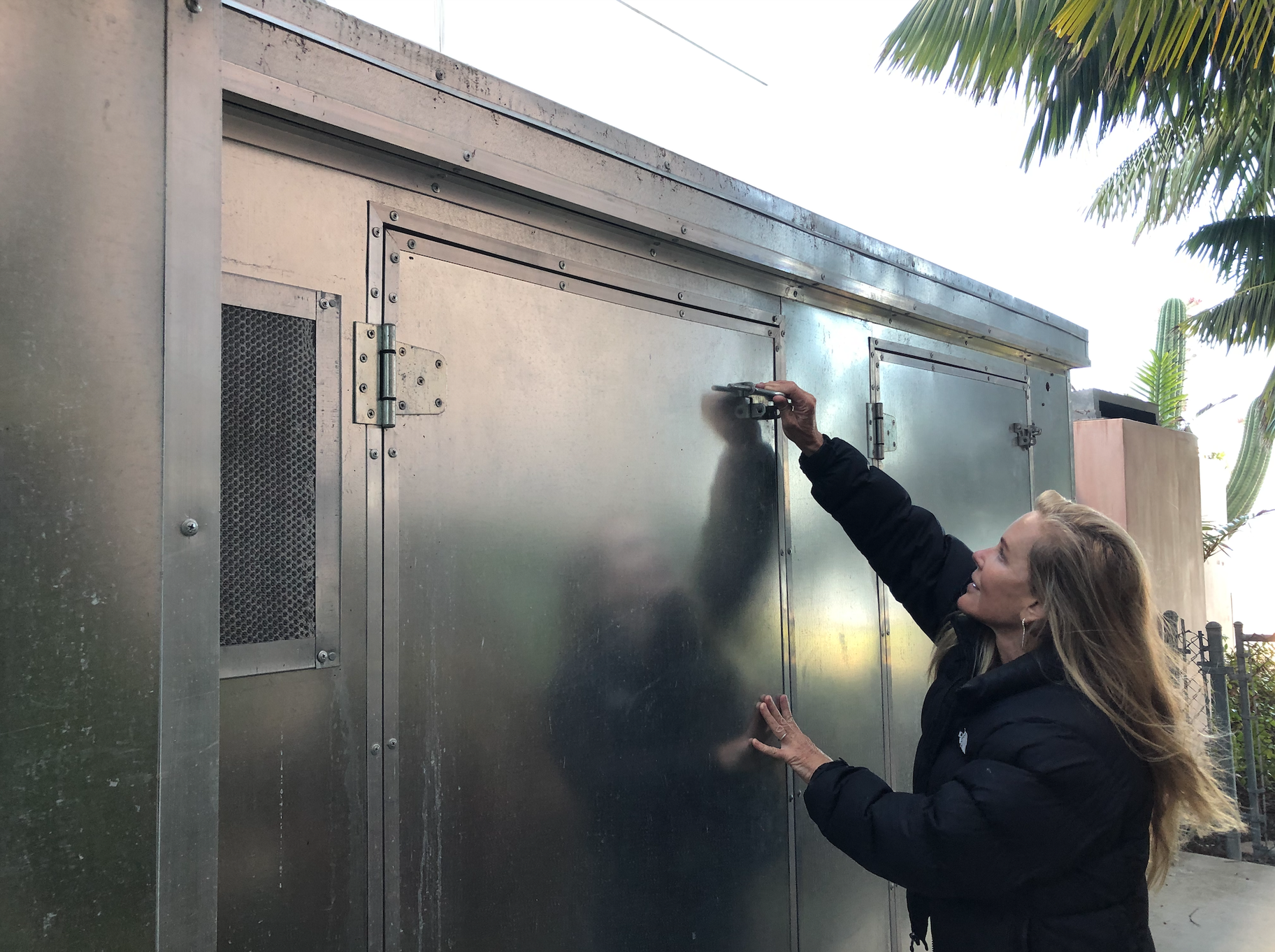 Katie Arnoldi’s emergency stash of drinking water lives in a metal shed. She replaced the wooden shed after the Woolsey Fire. Photo by Caleigh Wells.

She lives on Point Dume in one of those flat-roofed, stucco homes, on the same property she grew up on. Some of her neighbors lost their homes in Woolsey. She didn’t.

“What I realize now having gone through Woolsey — and we stayed the whole time — is I didn't know anything. And I was just so misinformed,” she says.

She has since replaced the wood shed on the side of her house, and a wood fence. She also has a hydrant hooked up to her pool now, and she’s gone through hours of training to identify what might make a house catch fire. 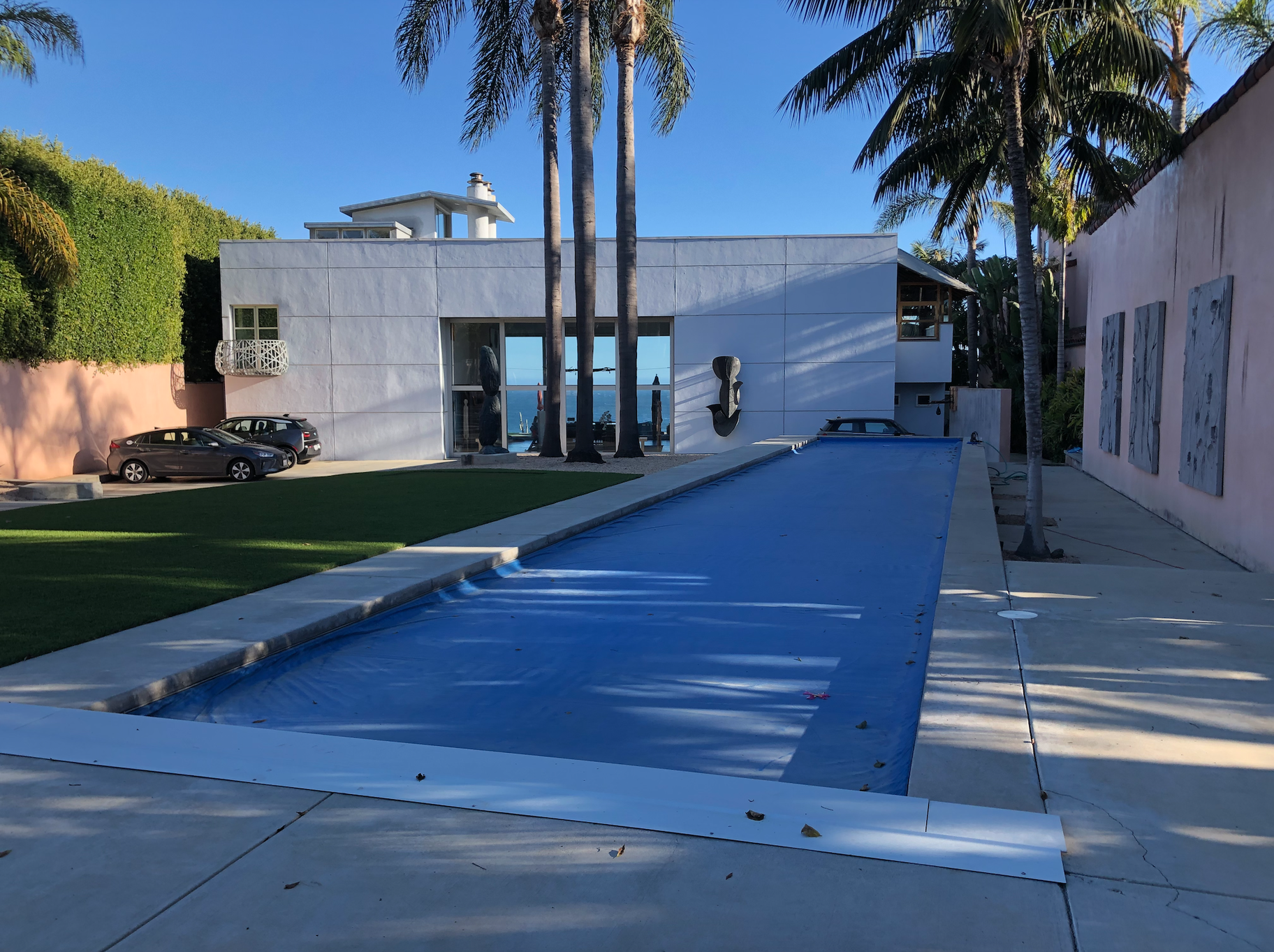 But even now that she’s something of an expert, she’s taking some risks. Her childhood home situated on the same property, just beneath where she lives now, is incredibly flammable. And it’ll probably stay that way.

The house is old. The eaves of the roof are perfect for embers to nestle into and smolder. It’s surrounded by a beautiful, weathered wooden deck. And under the deck is a giant exposed area with a giant pile of dead leaves — perfect kindling for wildfire.

“The danger is that fire embers get driven underneath that deck, catch on some of that debris, and then the whole thing goes up,” she says.

Fireproofing her property is an ongoing project for Arnoldi. She might never be able to guarantee her house will survive the next Woolsey Fire. But she says she’s done enough now that she can sleep at night.

And on hot, dry, windy days, there’ll always be a part of her that’s crossing her fingers and hoping for the best.