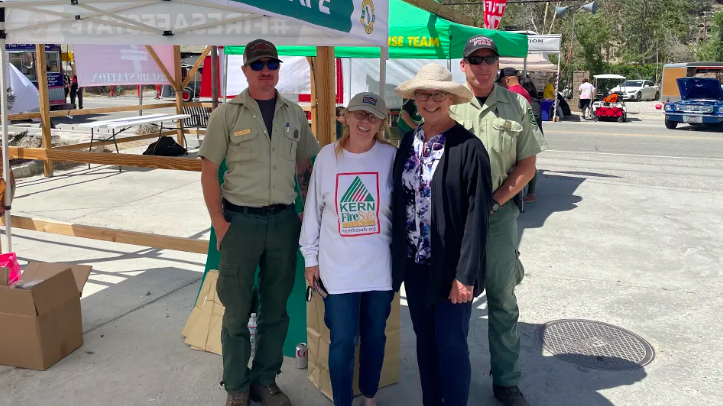 “Fire insurance has dropped us like, I don't want to say hot potatoes, but they just left us high and dry. It's hard to get a mortgage or anything up here if you can't get fire insurance,” says Kern County Fire Safe Council Secretary Kathleen Weinstein, second from left. Photo by Caleigh Wells

Residents in Frazer Park know they’re vulnerable to the wildfires that have burned bigger, hotter, and faster in recent years. There’s a large burn scar from a fire last year just a couple miles from this small town north of the Grapevine in Kern County. This area hasn’t seen an average amount of rainfall in decades, and homeowners are watching their insurance companies double or even triple their rates — if they can still get it at all.

“Fire insurance has dropped us like, I don't want to say hot potatoes, but they just left us high and dry,” says Kern County Fire Safe Council Secretary Kathleen Weinstein. “It's hard to get a mortgage or anything up here if you can't get fire insurance.”

That’s why Weinstein is part of a small group of volunteers trying to make Frazer Park Firewise, a federal designation that can come with better – and lower priced – insurance coverage. To earn those discounts, communities have to invest time and money in fire mitigation. But not every endangered community has the resources to get it done.

The U.S. Forest Service and the U.S. Department of the Interior certify communities as Firewise after they meet a long list of criteria. For starters, a fire expert has to look at all the properties in the Firewise area and figure out what how to make them safer.

“What are the roofs made of? What's the siding look like? … What type of vegetation do they have there?” says Megan Fitzgerald-McGowan from the National Fire Protection Association, which puts on the Firewise USA program.

Then the community needs to create a three-year plan to fix the problems found in the assessment, and at least three-quarters of the community needs to work toward getting that done. That might mean getting trees removed, or blocking off vents where embers can get in. The costs can add up, and less wealthy communities might face an added step of finding a way to fund the work.

“You kind of have to know how to apply for a grant, [and] how to manage a grant. And if you're really busy, that's a hard thing to do,” says Fitzgerald-McGowan.

Besides money, the community needs to invest time – a lot of time. That means one hour of work on fire prevention for every household in the area every year.

It’s a lot of work, and not many communities in Southern California have done it. The ones that have — Malibu, Calabasas, Beverly Hills, Topanga — all have something in common: wealthy residents.

Topanga, a cluster of roughly 3,200 homes up winding canyons under dense tree canopies in the Santa Monica Mountains, has a median household income of more than $120,000, roughly double the nationwide median.

The community does regular brush clearance and other home-hardening measures, plus they’re putting on events like regular webinars that teach the community how to protect their homes from wildfires. Nearly 100 participants showed up to their webinar in mid-May.

Topanga Fire Safe Council Co-President Beth Burnam gets that Topanga is privileged to have residents with the time to participate.

That time and money is in shorter supply in a string of equally vulnerable communities along a mountain ridge in the San Bernardino National Forest, west of Big Bear.

Crestline has a median household income of just over $60,000. None of those communities are Firewise yet, and many homeowners’ insurance coverage is in jeopardy. Laura Diberg, the president of Mountain Rim Fire Safe Council, says her insurance company dropped her coverage after she bought her house.

“Every year, more and more insurance entities are going away, fading away, changing their mind,” she says. Yet Firewise certification will be difficult, she acknowledges. “The lower income areas may not realize the benefits. They may not have the coordination of an HOA or a community-based organization or a Chamber of Commerce.”

But even in Crestline, Frazer Park, and other places where mitigating fire is tough to afford and people are busy, volunteers are doing their best to become Firewise. Because wildfire risk is part of everyday life. Just ask Amanda Lopez, who’s lived in Frazer Park for all of her 45 years.

“How to react and how to keep your property safe is just something that has been ingrained in me my whole life. It's not something I ever recall learning. It's just something you know,” says Amanda Lopez. 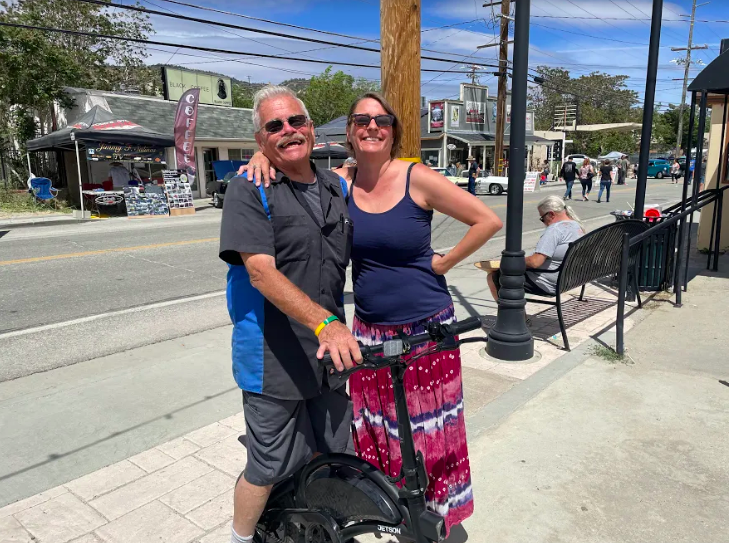 Amanda Lopez says her dad, David Carlson, got stuck on a closed road because of a wildfire in Frazer Park on her wedding day. Photo by Caleigh Wells.

Fire is baked into even her biggest memories.

“The day that I got married, there was a massive fire, and my dad was supposed to come give me away. He was two miles away from the wedding event and could not get through the fire blockade.”

Right now, Frazer Park is waiting to hear if they won a grant they need to get the fire assessments done. But the Kern County Fire Safe Council has been trying to protect not just this town, but an 8,000-square-miles area that encompasses the whole county.

“It is a tall order,” says their vice president Peggy Hoyt-Voelker. “It's only been a couple of years. And in those couple of years was COVID. So that didn't make things very easy. But we're really making progress.”

Wildfire insurance: To lower cost, pay to fortify your home

Wildfire-prone communities can earn better insurance coverage and discounts if they work to prevent wildfires. But it takes time and money that some poorer places don’t have.

The LA County sheriff’s race has been confusing for many. KCRW goes over the nine candidates, their endorsements, and policies.

In the primary election, Orange County will elect new local supervisors, and members to the State Assembly. What policies could change if Democrats take control of the OC...