The Observatory, as seen from the West Observatory Trail, is one of the icons of Griffith Park. Photo by Casey Schreiner.

Griffith Park is one of the largest city parks in North America. It’s a popular hiking destination and home to the Griffith Observatory, the Greek Theatre, and Hollywood sign. But there’s a lot more to the park than that.

Casey Schreiner, founder and editor of the blog Modern Hiker, is out with the first in-depth guide to the thousands of acres at Griffith Park. It’s called “Discovering Griffith Park: A Local’s Guide.”

Schreiner has lived in LA for 17 years and has lived at the foot of Griffith Park for seven. He talks to KCRW about the park’s history and gives recommendations for the least-crowded trails.

KCRW: Griffith Park was originally home to a Native American tribe. How did they use the park?

Schreiner: “The land of Griffith Park was originally home to the Tongva. … The area near Ferndale was the site of a council meeting ground, trading post area. Actually new scholarship has found that there's actually maybe two or three more settlements inside Griffith Park that were Tongva settlements.

Of course, when the Spanish came in, most of the Tongva were pushed out or exterminated or put into the mission system. So the land kind of came into Spanish hands. … The first landowner of the Rancho Los Feliz was actually one of the original pobladores, the 44 families and soldiers that founded Pueblo Los Angeles. [The park] stayed in his family for generations through … being in New Spain, then part of Mexico.

Then the land became part of the United States, went through a couple different American landowners before it landed in the hands of Griffith J. Griffith, who was a Welsh kind of rags-to-riches story that moved over to the Western United States and made quite a name for himself out here in LA.”

Griffith J. Griffith and his wife eventually donated their land to LA?

“Yes, so it was around a little over 3000 acres. This was December of 1896. And they donated the land to the City of Los Angeles as a Christmas present, specifically for use as a city park.

… At this point, LA is pretty much kind of a backwater town, like people are starting to move here. But we're still probably second, third, maybe even fourth or fifth fiddle in terms of cities in the state of California. San Diego was bigger. Santa Barbara was more important. San Francisco was at the center of power.

LA was really nothing. And then immediately overnight, we have a park that's significantly larger than Central Park in Manhattan. And it's so big and it's so remote that Griffith Park wasn't even inside LA city limits when it was given to the city in 1896.”

What did the park look like when it was donated to LA in 1896?

“There was some development there. It was not untouched land. The Rancho had been there for quite some time. One of those buildings is actually still there. … There's been kind of a rough-and-tumble golf course over there, and a few uses for recreation. An ostrich farm as well was kind of near where the old LA zoo sits right now. So it wasn't definitely like pure wilderness area, but most of that land was pretty rugged and kind of difficult to develop.”

Talk about the old LA zoo. 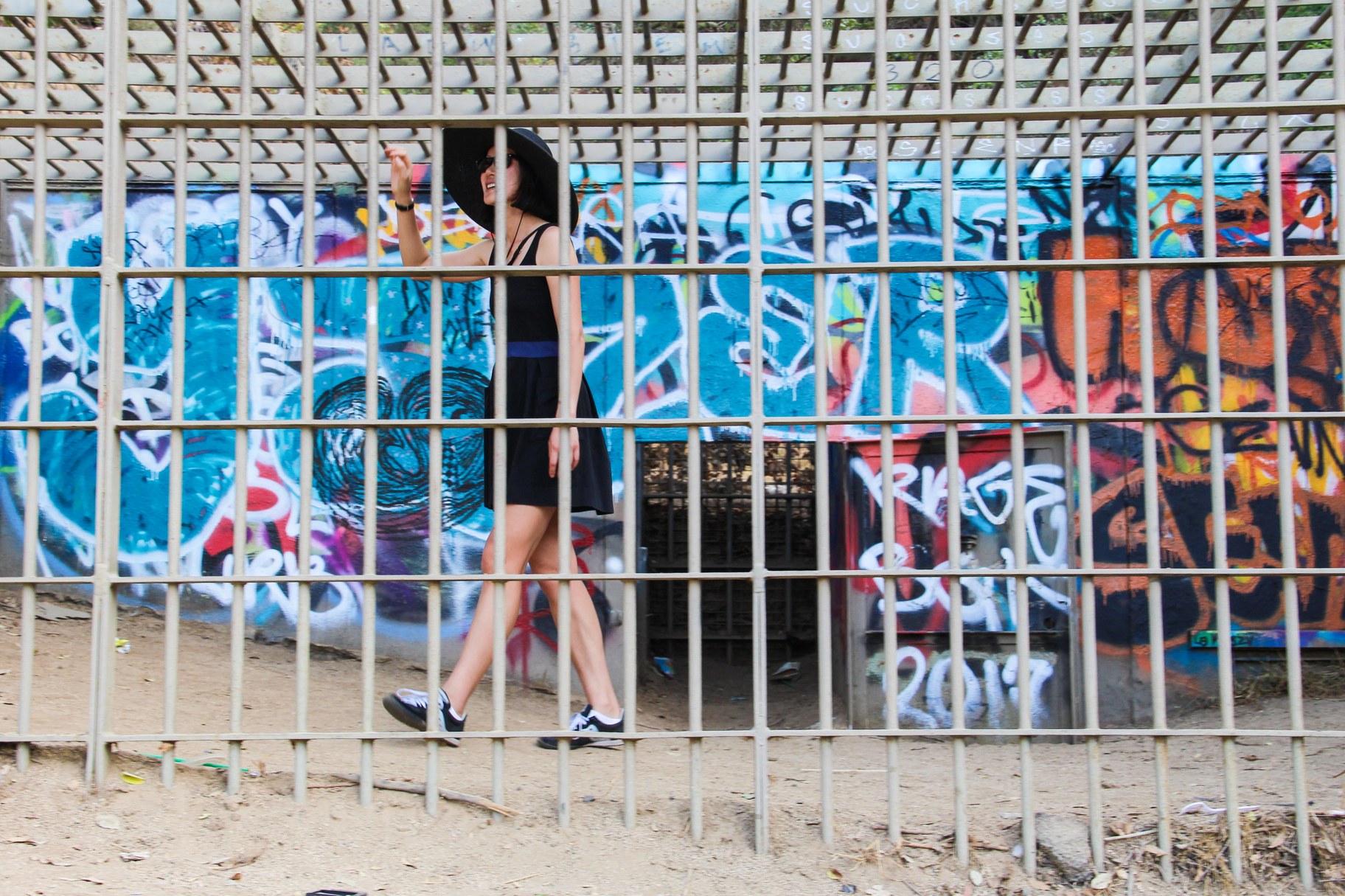 The old LA zoo has some unique cages and graffiti. September 2017. Photo by Efrain Velasco.

“It was not the first zoo in LA, but it was one of the earliest zoos. And it kind of sits near where the ostrich farm that Griffith and one of his business partners kind of co-owned and ran over there.

… The old LA zoo was kind of always a black eye on the City of Los Angeles. It was really not a nice zoo. It was well behind modern zoo standards. There was stuff about like sewage leaking into the LA River. And there was one particular polar bear named Ivan the Terrible who had a habit of murdering his fellow polar bears. So it really was like not something that the city was necessarily proud of.

And that actually kind of got the city behind the bond issues and the long drawn out process that got us our current zoo, which by all measures is significantly nicer than the old LA zoo ever was.”

How did it become the park that it is today?

“Griffith himself did donate money for the Greek Theatre and the Griffith Observatory. Those were things that he had sort of planned to build inside the park. He also of course envisioned some golf courses as well. And he and his son Van kind of kept land near the golf courses. And there was an aviation park inside Griffith Park for quite some time as well that became a National Guard airfield for a while.

Griffith Park has kind of always been this sort of land of many uses. Even when Griffith donated it, he envisioned it as partly manicured gardens, partly golf courses, partly that sort of classic European-East-Coast-City city park. But also it was important for him to have that sort of untouched wild chaparral slopes in there as well.

So Griffith Park has always sort of been those two things. And you know, they haven't always been playing well together. … You get people who want more development … people that want less development.

And as the park … expanded into Mount Lee where the Hollywood sign is, some of the neighborhoods around the Hollywood land housing development, and then more recently, into Cahuenga Peak on the west side, it's definitely always had that sort of struggle of what is Griffith Park, and who is it for, and what belongs in which sections of the park.” 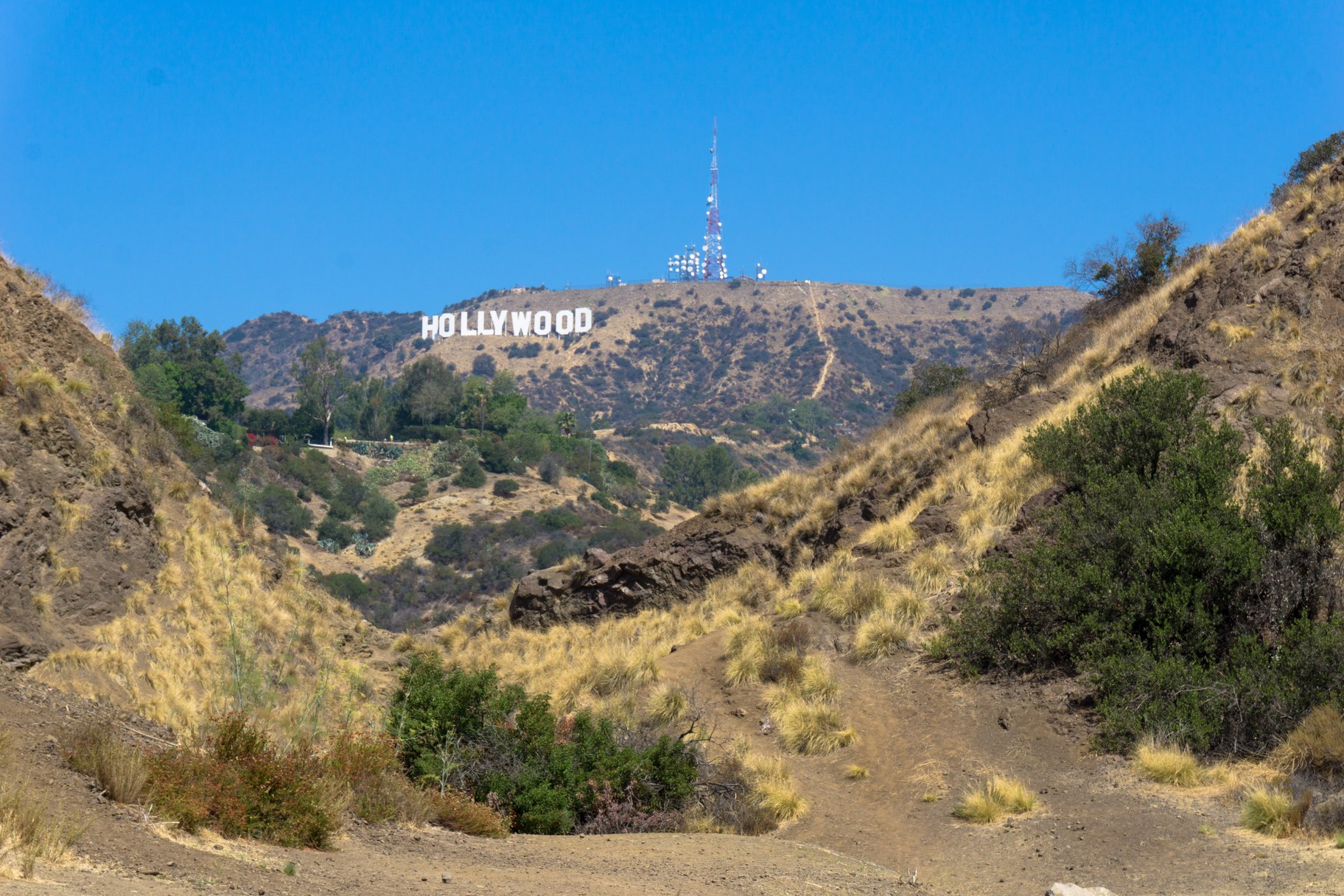 View of the Hollywood sign from Bronson Cave. Photo by Casey Schreiner.

When Griffith J. Griffith donated the park, he wanted it to always be free, which was progressive at the time.

“It was very progressive. Actually, Griffith wrote a book about his park philosophy. It's called ‘Parks, Boulevards, and Playgrounds.’ I think he wrote it around 1910. And in this book, he's got some pretty forward facing ideas about the importance of parks for cities, and how cities should treat the parks.

He described Griffith Park — and parks in general — as a safety valve for city life. So this is not just a nice luxury that a city should have if it could afford it. Parks were a necessity for people who lived inside cities. He really, really held that value true to his core.

He also wanted parks to be free, which is why in the deed to Griffith Park, we can never charge an admission fee to enter the park.

And in his book, he really wanted people to be able to get to the park, even if they didn't have a car or access. So he envisioned actually a system of tree-lined boulevards that would lead into the more developed areas of Los Angeles, so that people could kind of have a park experience as they traveled to the park.”

What are some of the less traveled trails at Griffith Park? 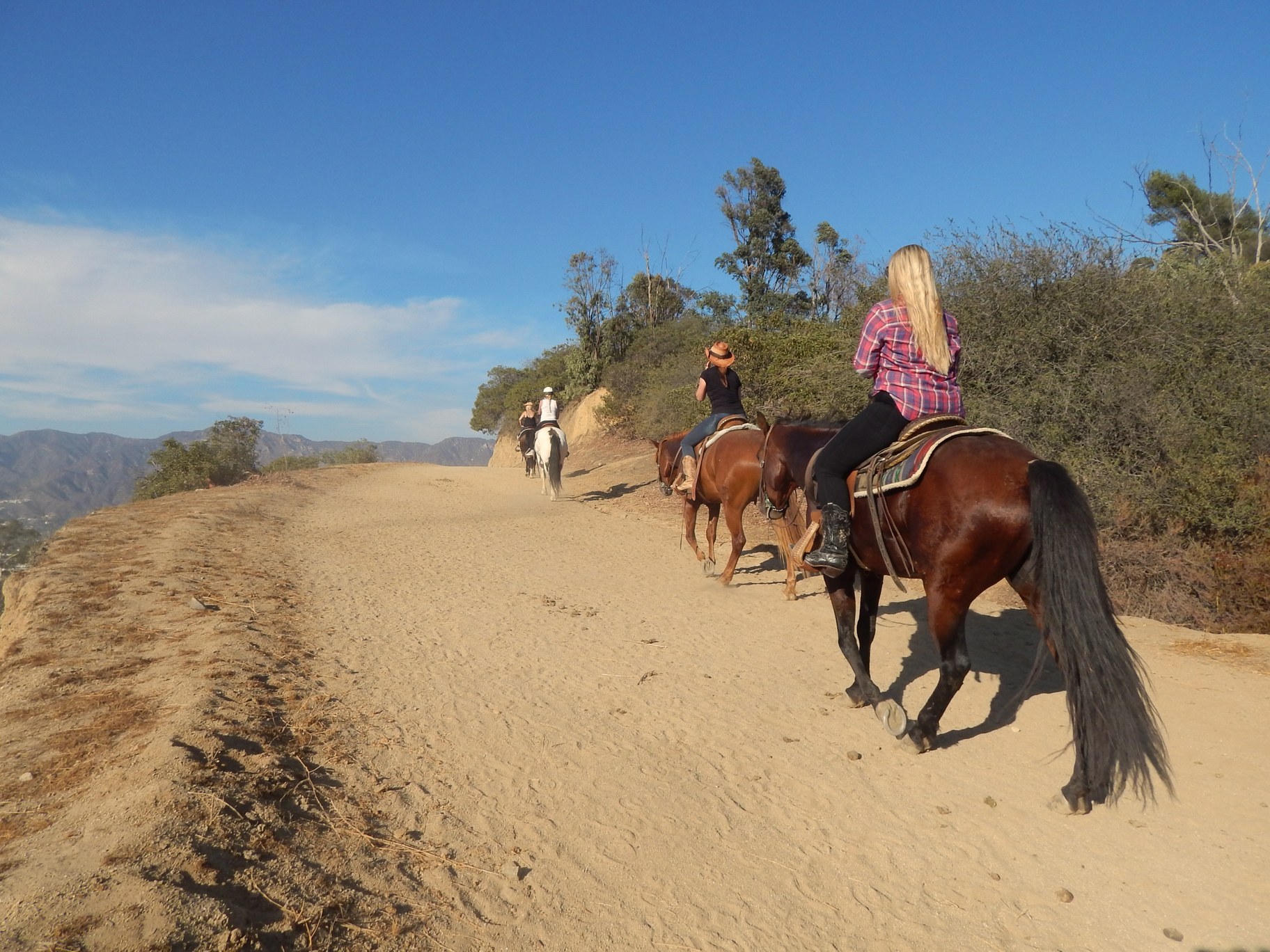 Equestrians on the Skyline Trail. Photo by Casey Schreiner.

“The northern side of the park and the eastern side of the park tend to have much less frequently visited trails. Those tend to be more equestrian areas. On the east side, a lot of trail runners use that area. It's not nearly as crowded as it is around the Observatory.

So if you're on the north side, there's a really great trail called the Skyline Trail that kind of goes from Travel Town to the LA zoo. You get this really beautiful view looking north, kind of across Burbank to the Verdugo Mountains and the San Gabriels when it's clear. You can see the LA River right below you. There's a big chunk of it where it's soft bottom, so it looks like a naturalized river.

You can have this really awesome, kind of perfectly unique, perfectly LA, perfect Griffith Park experience there, where you're looking at this territory, maybe you see a line of horseback riders come up in their cowboy hats, and you're kind of humming a Western tune in your head. Maybe it's sunset, and you have this experience of ‘how can I be here in the middle of a city like this?’ 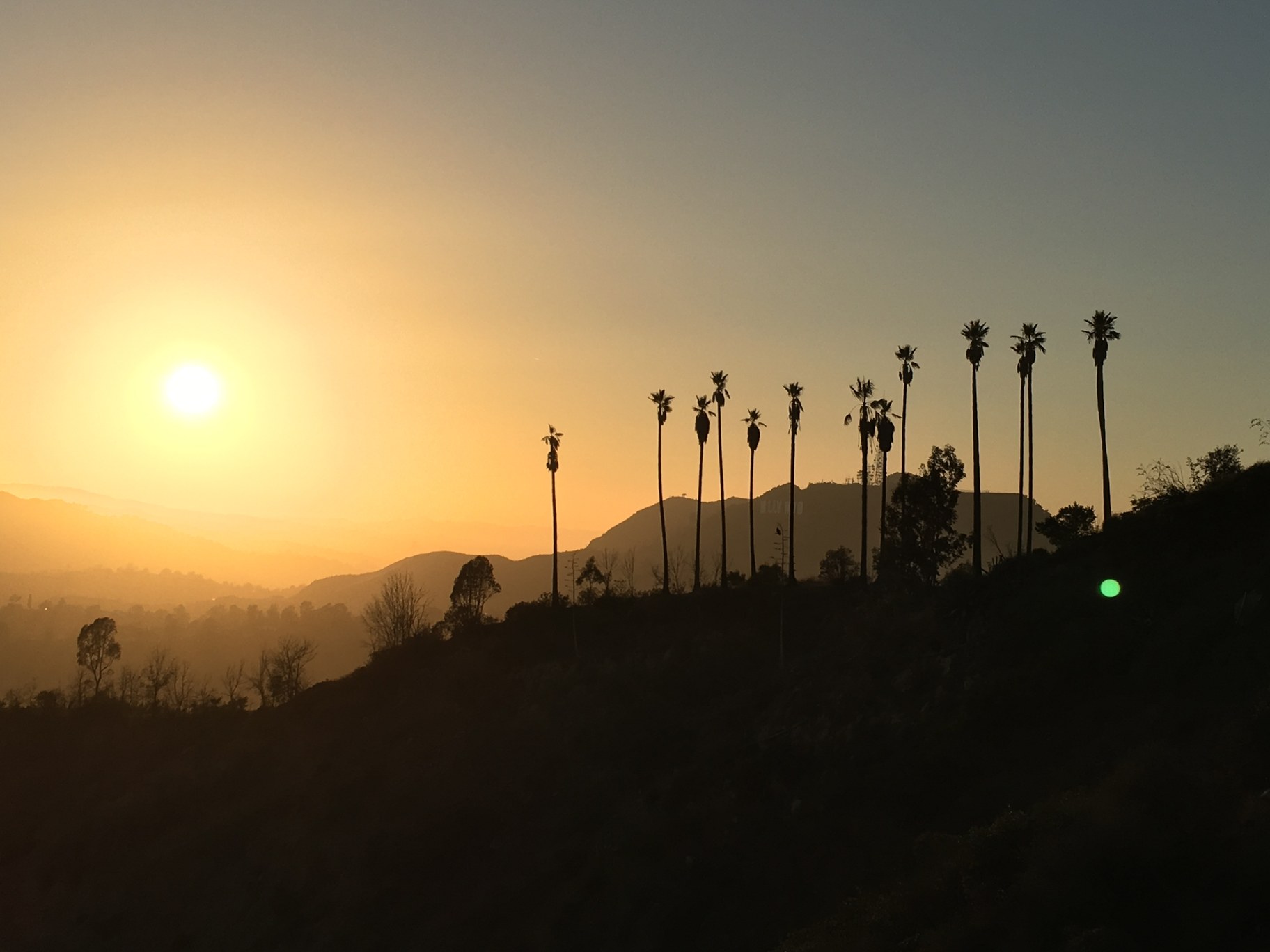 Griffith Park and the Captain’s Roost at sunset. Photo by Casey Schreiner.

And then you look to the north and you see North America's largest IKEA over at Burbank. And you're like, ‘Yep, this is pretty much the quintessential LA experience right here.’

It's all those things. It's wilderness, it’s chaparral, it's built up areas, it’s civilization. It's kind of a big wonderful mess.”