Amber Ruffin is now the only Black woman hosting a late-night TV show. Photo courtesy of “The Amber Ruffin Show”

Comedian Amber Ruffin received a personal phone call several years ago from Seth Meyers, asking her to join his show’s writing staff. She became the first Black woman to write for a late-night network talk show. The writing job eventually turned into on-air appearances, with her recurring segment called “Amber Says What.”

Ruffin now has her own talk show, “The Amber Ruffin Show,” which premiered last month on NBC’s Peacock. Ruffin is now the only Black woman hosting a late-night show.

KCRW: It’s a weird time to debut your show, right? Because you don’t have a physical audience.

Amber Ruffin: “It’s a mess over here, man. There’s no audience. You can’t touch anyone. You can’t talk to anybody too closely. And only now do I realize how close I will talk to a person. … I like to grab your arm while I'm talking to you. And I can't do that anymore. … People are probably so relieved.”

You do your show at Rockefeller Center, right? So you're in this big building alone?

“There aren't a lot of people here. We are in the studio with no audience, and like half the normal crew.”

In your debut episode, you give a monologue onstage, talking to just the camera. You’re all dressed up. Does this setup change the way you perform or think of your comedy?

“Yes, everything has to be a little bit smaller, which is hard for me to begin with, because I'm quite loud. And I started comedy doing theater. So I'm way bigger than I'm supposed to be anyway. So I have to bring it in even more and make everything even smaller. And it's tough to do.”

Is it hard to tell jokes and not have anyone laugh?

“No. It's hard to tell jokes and have people boo. That's hard. Tell the jokes, the silence is fine. Maybe felt weird at the beginning. This is how bad my memory is. I'm like, ‘It's always been like this. It's fine.’”

You said you started in theater. How did you transition to comedy?

“I grew up in Omaha. And there wasn't a lot of different possibilities. So when my friend was like, ‘I'm in this improv group.’ I was like, ‘Great. I love it. Let's try it.’ So then I joined his improv group. And then I fell in love with improv, and ended up moving to Chicago to try to make a living at it. And hey, it worked out.”

In Chicago, you were mainly working as a comedian doing improv?

“When I was in Chicago, I took improv classes. And I was interning at this place called iO. And then I got a job in Amsterdam while I was in Chicago the first time. But I ended up going back to Chicago to do The Second

Seth Meyers heard of you through The Second City?

“No, Seth Meyers heard of me through that job in Amsterdam. It's a theater called Boom Chicago, and it's a lot like Second City in that you have a million shows a week and you have corporate shows and stuff. And it's just this big 300-seat theater, and you entertain a bunch of tourists. So it's a lot like The Second City, except everything is, I'm going to say like 10 times broader. Because you know, no one's first language is English. So everything has to be very big and a little slow and very physical.

But Seth Meyers is also an alum of Boom Chicago. So that's where we met.” 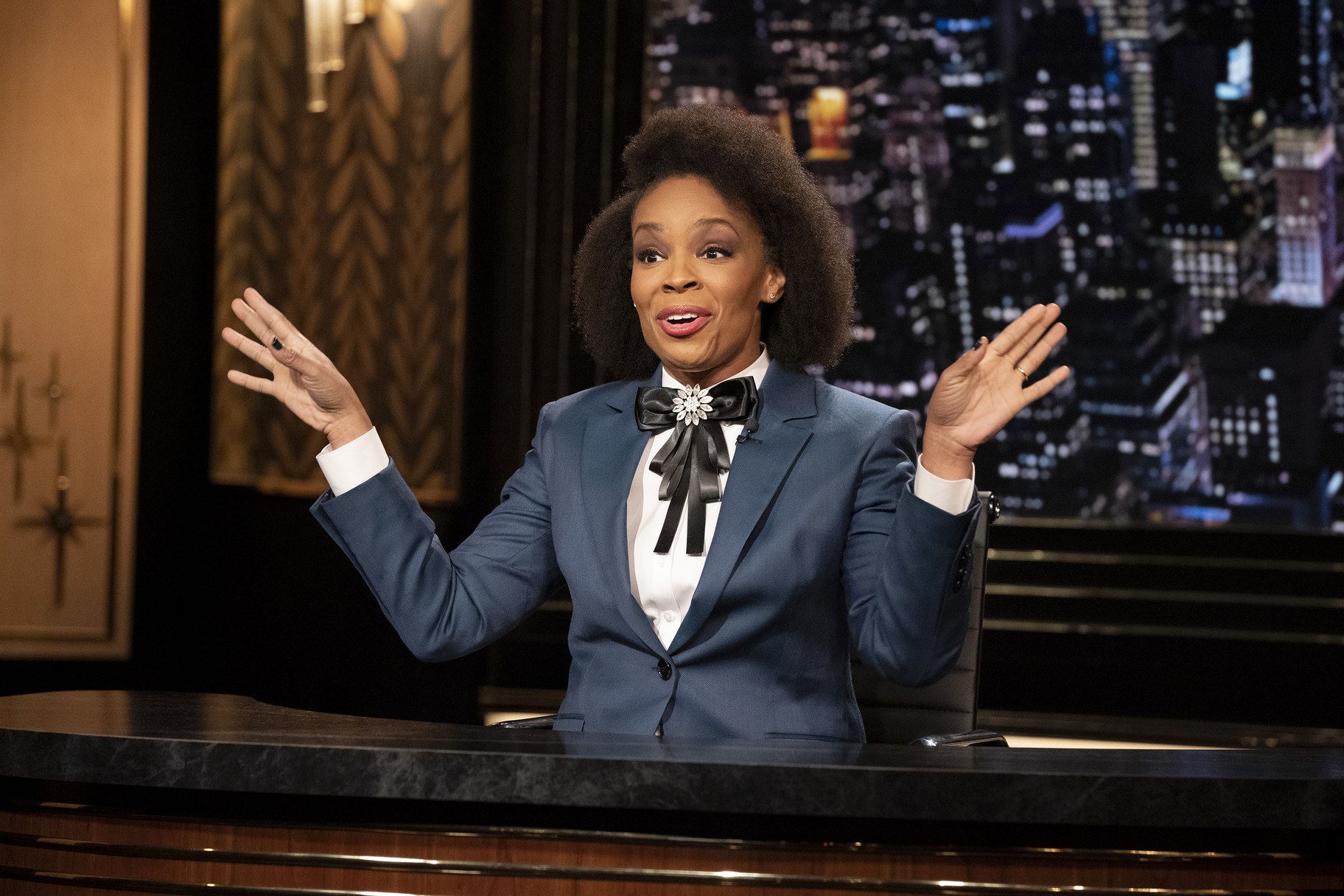 Amber Ruffin on not having a physical audience for her new show: “It's hard to tell jokes and have people boo. That's hard. Tell the jokes, the silence is fine.” Photo courtesy of “The Amber Ruffin Show”

What was it like going from Omaha to Chicago to Amsterdam to do comedy?

“Well, I had never been out of the country when I moved to Amsterdam. That was my first time, anywhere. And it was just like the longest flight in the world, just carrying everything you own and just terrified. It was a messy mess.

You know how certain jokes to us are like, ‘Oh, well, that's childish. It's not funny?’ In Holland, they don't have that. And I am all for that.”

You’re still on Seth Meyers’ show. How do you do two full-time jobs?

“I've always had other jobs while I worked at ‘Late Night with Seth Meyers.’ … It's much more work. But essentially, you're writing monologue jokes, and you're writing a bunch of sketches. It's just that more sketches get approved now because I'm in charge of approving them.”

Seth Meyers also brought you on the show to talk about your life experience, particularly after the George Floyd killing. In June, he opened the show with you telling a story about a police officer pulling you over when you were driving with a white friend.

You said the cop respected your friend and listened to him, but assumed you were a prostitute. When you told it on camera, you were kind of laughing. Is that your attitude: You’ve got to laugh at this because it's so absurd?

I will say I cannot believe that story. And that was the mildest story I have. But the cop let us go. I know the cop thought I was a prostitute. But it was like, ‘Oh, well, who cares. Get out of here.’ Which I thought was insane.”

The cop wasn't convinced that you weren't a prostitute after all that?

“He absolutely not convinced. But my friend was mad at him. So he was like, okay, like he just didn't want the headache.”

Did Seth Meyers ask you to tell these stories at the beginning of the show?

“No, I went to him. And I said, ‘What if we put this in the show?’ I didn't think it would open the show every night of that week. But we did. We opened with a different cop story every night.

… It's crazy. The amount of stories, it's absolutely nuts. And I made sure to say this. At the beginning of the very first story I said, ‘Every Black person I know has stories like this. Most have more than a few. And I'm the most regular … boring guy you've ever met. And I have quite a few.’ So I mean, can you imagine if anyone had any amount of like being outside after the sun goes down? … But it's me. And it's in the daytime in the middle of the day, in the light. There are people around. These people don't care.”

Have you ever thought that the cop was so angry that the encounter could end badly?

“100%. The first story I told in that series of stories, I thought for sure the man was going to murder me, that he's going to snatch me out of his car and kill me. He was so mad.

Before I’d said one word, he was so furious. He was coming to get me. Then he saw I was a girl. And he saw that I was very young. I was a teenager. And he saw that I was crying. So he felt extremely bad the second he saw me. But only because I was a crying girl. If I had been a strong, smart, young man, I'd probably be dead or at least severely beaten.”

You just got your license, and you were speeding?

“Yes, I was speeding. But I think what caught his eye was that I was blasting my music really loud. But I was in like a big pack of cars going with the flow of traffic. And the way he plucked me out of all of these cars, I'll never forget it. He was clearly mad about my loud music and being Black.”

There's so much going on and so much heaviness in our world right now — with police violence, racial injustice, coronavirus, unemployment, climate change. How do you see your role as a comedian? Do you see your show as a means of escape, or a vehicle to discuss these issues?

“I only see my show as an amen corner to the things that are driving you insane. … What is happening in the world can make a person mad, but the second you start saying all of these things happen and that is not right, then you can stop feeling so insane about it.

Like I do think we're constantly being gaslit by just the fact that everything is happening is happening [sic]. It makes a person nuts. So a big part of I think dealing with this is just saying, ‘Okay, this is a list of crazy things that have happened. If you looked at it and you thought it was crazy, you were absolutely right. If you looked at it, and it made you angry or sad, you're absolutely right.’ And I think that is what I can offer. That and a bunch of different jokes. And so I think that's where I can be found.”