A full-size replica of Michelangelo’s David was perched high atop a hill in the Forest Lawn cemetery in Glendale. The statue was carved from the same type of marble the master sculptor used centuries ago.

However, in early March, the 17-foot-tall statue cracked at the ankles. Then it toppled over and shattered into dozens — maybe hundreds — of pieces.

Exactly why it fell over is unclear.

Cumulative seismic activity might be one cause, according to James Fishburne, Director of the Forest Lawn Museum.

A previous marble David statue once stood in Glendale, but it fell over during the 1994 Northridge earthquake.

However, microfractures are not unique to the replica David. Italian conservators have found microfractures on the original Italian statue — but that one never toppled over. 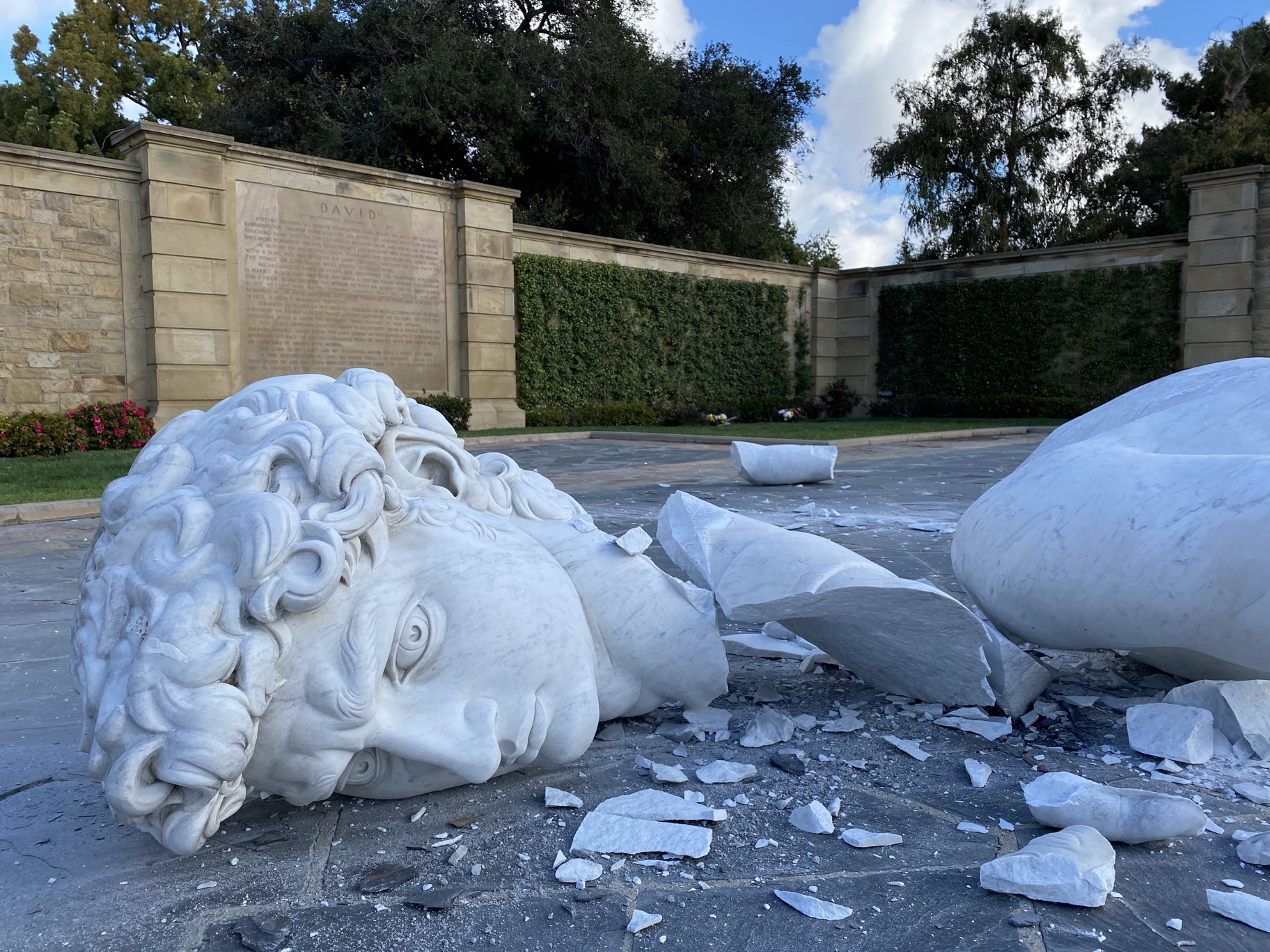 Another reason it fell over might be due to stress from international travel. Forest Lawn’s David was sculpted in Florence and shipped to Glendale, Fishburne says.

The real culprit might be the structural composition of the marble, he says.

“Marble is sort of this living material. The grain of each stone is different, so it’s the luck of the draw in some degree that’s kept the original one up — or that knocked ours down.”

There’s concern over the structural integrity of the original David. Italian conservators are proposing to move it outside of Florence, in order to lengthen its lifespan. There’s also the option of using bracing to keep it steady, but doing so might take away from its artistic impact, Fishburne notes.

For the last century, Michaelangelo’s work has been part of the artistic fabric of Forest Lawn, which is home to a full-scale version of his Moses sculpture, plus a replica of The Pietà, the sculpture found at St. Peter’s Basilica. Visitors can find much of the artwork and statues at its highest point — an area called The Court of David.

The cemetery has not decided what to do with the fragments of David, but they’re considering using them as art or study pieces for artists and art schools.

There are plans to replace David one day. Forest Lawn has reached out to their Italian studios. The staff hope to have another statue in Glendale within the next two years.

Governors Gavin Newsom of California, Andrew Cuomo of New York, Mike DeWine of Ohio, and Gretchen Whitmer of Michigan are all experiencing high approval ratings for...

LA Times’ Julia Wick on having COVID-19 and living alone

This novel coronavirus can infect even relatively young people without underlying health conditions, including LA Times reporter Julia Wick. Three weeks ago, she was...

A full-size replica of Michelangelo’s David was perched high atop a hill in the Forest Lawn cemetery. It was carved from the same type of marble the master sculptor used...

“He is really really great. He does have a kind of quiet suffering on his face that really really covers the entire film,” critic Witney Seibold says of Tzi Ma's performance...

It’s a strange time to celebrate Passover, the Jewish holiday commemerating the plagues inflicted upon Egypt, which led to the liberation of the Israelites from slavery.

At 8 PM each night, Silver Lake residents cheer for doctors, nurses, and hospital workers risking their lives for us. The spontaneous cheering, whistling, and drum banging...