Half Dome is a distinctly shaped granite rock formation in Yosemite National Park. Photo by Shutterstock.

“Trees block view and there are too many gray rocks” is a real review of Yosemite National Park in Central California, which is known for giant sequoia trees, towering granite cliffs like El Capitan, and waterfalls that can resemble living sunsets tumbling down a mountain.

She just expanded her IG into a book called “Subpar Parks: America’s Most Extraordinary National Parks and their Least Impressed Visitors.” 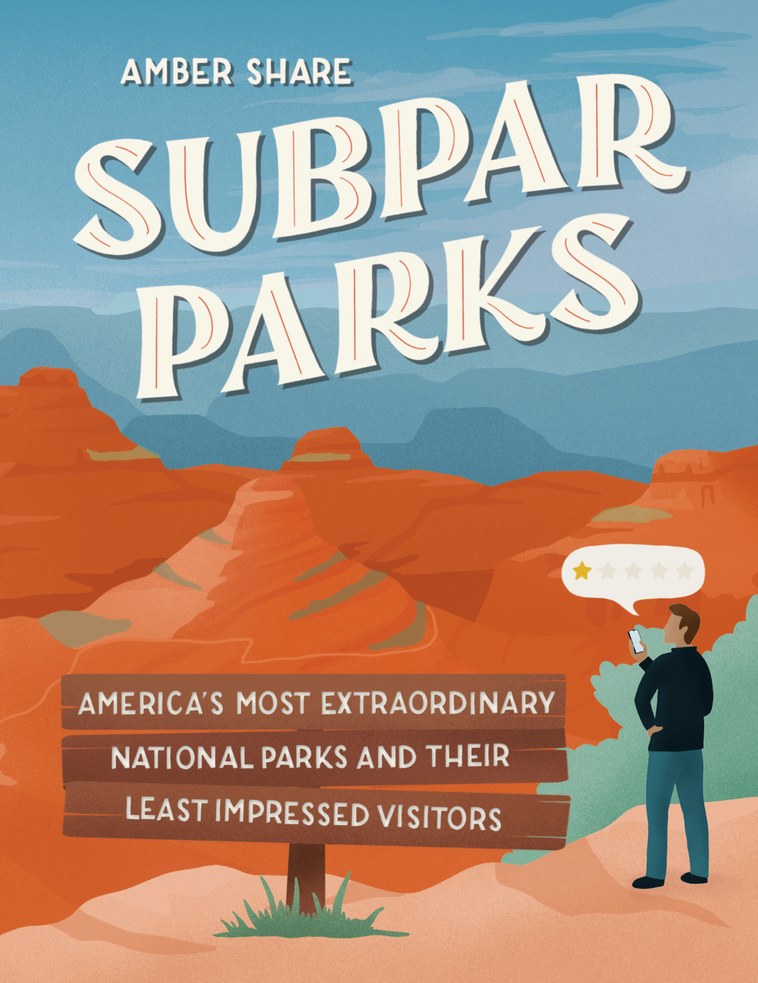 On July 12, 1999, on a cross-country road trip while moving from Hawaii to Italy, our family minivan pulled up to the South Rim of the Grand Canyon. A rambunctious and curious ten-year-old, I was instantly transfixed, bursting with questions. What was this place? How did it exist? What made it? What’s at the bottom? I poked my head between two bars of the railing, there to keep tourists a safe distance from the edge of the canyon, to try to see a bit better, and I was so engrossed by the endless layers of rock stretching out in front of me that, forgetting my positioning, I jerked my head up into the railing when I stood back up. Even though it was rainy and foggy, we spent a few glorious days exploring the rim, and I was fascinated. Twenty-some years later, I would come to learn that someone else looked at the place that immediately captured my attention and saw it only as “a very, very large hole.”

I first discovered there were one-star reviews of our national parks through a Reddit post, and I didn’t know whether to laugh or cry. I couldn’t understand how someone could look at the same wonders of nature as I and feel so underwhelmed.

Like many people, I consider the parks an integral part of my childhood. We were a Navy family, and my parents would take me, my older brother, and my younger sister to national parks wherever we went, exploring the Great Smokies, the Everglades, the Badlands, Congaree, Mammoth Cave, and Haleakala ̄, to name a few. I was a proud Junior Ranger, dutifully read all of the educational signage, and collected medallions for my walking stick at every park I could. As I mentioned earlier, we even road-tripped from California to New Jersey when I was ten, visiting tons of parks along the way, including those memorable few days at the Grand Canyon.

And that love for nature that started early has stayed with me into my adult life—most of my vacations revolve around hiking, backpacking, or just being outside some-where. I live in Raleigh, North Carolina, now with my husband, Taylor, (and our sweet and spunky cat, Suki) after years in DC, and in both city environments we have constantly sought solitude in nature at local and state parks—thankfully both cities have great nearby parks! We plan frequent trips out to the Appalachians, whether visiting a national park, national forest, or state park, and I take at least one trip annually to more distant locations. As that ten-year-old version of me who wanted to head down into the Grand Canyon would be happy to know, the bottom of a canyon has become my favorite place to be—at age twenty-nine, I finally made it into the depths of the Grand Canyon, on a three-day, fifty-five-plus-mile backpacking trip through tribal canyon lands that only deepened and solidified my love for the outdoors (and opened up a whole new world of places to explore, since I now knew I was capable of a multiday backpacking trip!). I’ve hiked, camped, and driven through countless National Park Service sites, as well as state and local parks and other public lands.

It seems only natural that my love of the parks would eventually bleed together with my love of art. At age five, I declared that I wanted to be an artist when I grew up. As the years went on, the often clever and punny world of advertising drew me in, and I wound up studying both subjects in college, figuring that I wouldn’t be able to make much of a living with just an art degree. After years jumping between marketing and graphic design jobs, but always feeling a pull toward my artistic hobbies, I decided to try to make the leap into being a professional hand-lettering artist and illustrator, and Subpar Parks is what helped me achieve it. Most people in creative industries will tell you that the holy grail—a project that perfectly combines some of your interests and makes you excited to jump out of bed and work on it every day—doesn’t come around very often. The one-star reviews of the parks were a lightning bolt of inspiration, and I knew immediately that Subpar Parks was a holy grail project for me, perfectly combining my interests, skills, and personality. A project that combined my love of the outdoors with illustration and hand-lettering, plus a lot of sarcasm and ample opportunities for puns? Sold. I think my passion and excitement for the project is part of what made it such a success (and eventually led to me being able to work full-time as an artist!).

I started with the iconic Delicate Arch in Arches National Park in Utah, which one unhappy reviewer described as looking “nothing like the license plate.” I gathered all of the reviews for the project before I started, and that review stuck out to me the most—while I hadn’t yet been to Arches, I’d always wanted to go, and I thought it was especially funny to illustrate a negative review that compared a real-life wonder of nature unfavorably to an illustrated representation of it. Next was Joshua Tree, a desert wilderness larger than Rhode Island, and an excellent place to hike for stunning views of the Coachella Valley—an activity characterized by one disappointed reviewer as just “walking around in the desert.” Then came that “very, very large hole” that is so near and dear to me. A part of me worried that people wouldn’t understand what I was doing, but I couldn’t have been more wrong. The laughter was immediate, and I quickly started posting twice per week instead of my planned once-a-week timeline because the community that was forming was so engaged and brought me so much joy. The project resonated with hard-core adventurers and casual park visitors alike, along with park rangers, and even those who work in other industries where they’re often on the receiving end of criticism. (I’ve heard from many servers and retail clerks that Subpar Parks has helped them laugh off the feedback from disgruntled customers they deal with all day.)

Subpar Parks grew beyond its original snarky premise into a wonderful community of park lovers who eagerly comment and send messages and photos with their own experiences in these incredible places. At a time when many of us couldn’t travel due to COVID-19, the project became a space for us (including the occasional park social media account!) to come together in our appreciation for the natural, cultural, and historical wonders we couldn’t go see.