The cover of “Nearing Ninety.” Credit: Simon and Schuster.

Longtime writer Judith Viorst is 88 years old. She’s gotten a knee replacement for her knee replacement, found herself listening to to more eulogies than symphonies, and discovered her missing keys in the freezer.

Now, during just in time for National Poetry Month, she’s out with a new book of poems that celebrates the joys and tribulations of being old. It’s called Nearing Ninety: And Other Comedies of Late Life.

Her book is the latest in a series on each decade in life, including “It’s Hard to be Hip Over Thirty and Other Tragedies of Married Life,” “Suddenly Sixty and Other Shocks of Later Life,” and “Unexpectedly Eighty and Other Adaptations.” 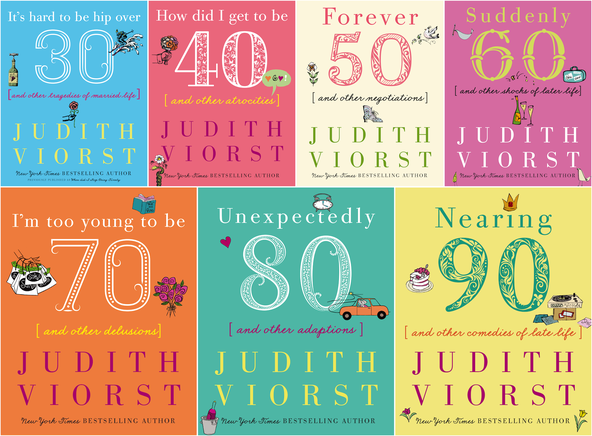 “You take what the issues are of those decades very seriously, and you can mobilize some humor about them, but it takes a long time. I'm getting a little speedier laughing at what used to look like ‘Apocalypse Now,’” Viorst tells Press Play.

“Attitude”
Once upon a time I flirted,
Smooth of skin, long-haired, tight-skirted,
Never satisfied with what I got.
Foolish choices. Duds I dated.
Bad vacations. Jobs I hated.
What did I complain about? A lot.

Once upon a time I twinkled.
Now I’m achy, creaky, crinkled,
Also slow-down, sidelined, out of touch.
No stroke. No chemotherapy.
And (as of now) dementia-free.
What’s there to complain about? Not much.

Elsewhere in the book, she’s less optimistic. She says, “If they were giving PhDs in complaining, I would be a doctorate. Absolutely. Complaining and worrying are two of my leading talents.”

Now she grumbles about her middle-aged children not taking her advice, and being impervious to her contributions.

“Of course I worry about practically anything they do, particularly since I have a serious mountain biker in the family, and I keep on whispering, ‘What about golf?’ But it’s not working.”

Viorst has been married to the same man for nearly 60 years, and writes:

“A Warning (or Maybe a Love Song) for My Husband”
Each morning I get up before you
And stand by your side of the bed.
I’m checking your chest to make sure you
Are breathing. Still breathing. Not dead.
The reason I worry about you
Is widowhood’s not my Plan B.
I don’t intend living without you.
So don’t you die before me.

Of course you’re a pain in the ass, dear.
Go show me a husband who’s not.
But on all the others I’ll pass, dear.
And stick with the guy that I’ve got.
And yes, we have what are called issues,
Not always resolved peaceably.
But spare me the tears and the tissues.
Don’t you dare die before me.

My words aren’t meant to disparage.
Those ladies who live on their own.
But after six decades of marriage,
I’d rather not go it alone.
The sentiment here may not thrill you,
But listen, my love, carefully:
Keep staying alive, or I’ll kill you.
Don’t you dare die before me.

Viorst says her husband keeps threatening to die before her, and they have a terrible mess in the basement that each hopes to leave to the other to clean.

When it comes to marriage, Viorst says she’s a great believer in dumb luck. “I think people have no clue what the hell they're doing when they pick somebody to be married to ‘till death do them part. And they're just lucky if the person that they pick when they're in their 20s is going to develop in the same direction, is going to have the same kinds of interests, is going to be in any way a kind of person they're going to want to even have a conversation with in 20 or 30 years.”

She says she and her husband have been incredibly lucky. After all these years together, they still like each other. They talk all the time, read the newspaper aloud, and spend time listening to the radio, watching TV, keeping up with the news of the world.

Humor is key. “After you get married, you have two choices: homicide or laughter. And you better laugh,” she says.

On marital strife, Viorst says, “Now when we're mad at each other about something, I say to him, ‘You know we're going to make up in two days. Why should we waste the two days? Let's just forget about it, and make up now.” 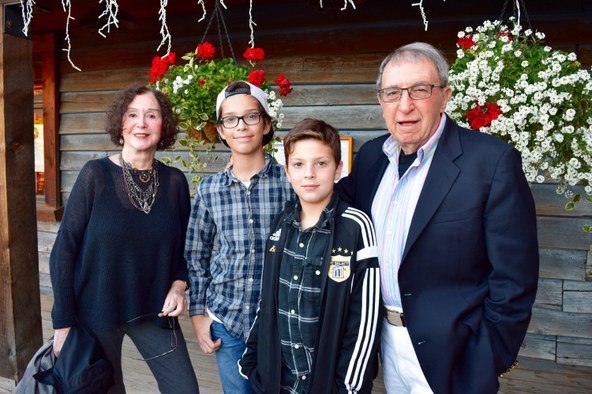 Judith Viorst with her husband and grandkids. Credit: Marya Gwadz.

How does age change marriage?

“I think it changes everything. And I think there is a word going around, which makes me wince a little bit. But the fact is it's an important word: the development of gratitude. Gratitude for all the good stuff in your life, and gratitude for the bad stuff that's not in your life,” she says.

Mindfulness also helps. “Everyday events and scenes all around you are glorious if you want to pay attention. And I think one of the things we do is we pay a lot more attention to the everyday sweetness of life without getting too obnoxious and operatic about it. Because if we’re going to say, ‘Oh I just have a little bit time left, I've got to love every minute,’ you'll drive everybody, including yourself, nuts.”

At this age, Viorst says ambitions have been tamed, expectations modified, a lot of ‘been there, done that,’ and ‘this too shall pass’ becomes an increasingly stronger reality. And so, she’s calmer and more philosophical.

Here’s the last poem in her book:

“My legacy”
Since it’s looking as if my legacy isn’t shaping up to be
Peace on earth and universal health care,
Here’s what I’m hoping to be remembered for:

Showing up when I say I’m showing up.
Sticking with what I’ve started until it’s done.
Sending valentines to all the children in our family (until they reach the age of twenty-one)
And never, ever leaving the house without eyeliner.

Playing a relentless game of Scrabble.
Keeping the secrets I promised I would keep.
Being able to laugh about the bad things that happen to me
(Though not before I first whine, and weep, and rail against my fate,
and blame my husband).

Doing work I’m able to be proud of.
Making a truly transcendent matzoh ball.
Coming to terms with mortality (though, to be perfectly honest, I’m still
not feeling all that thrilled about dying).

Coming to terms with not feeling thrilled about dying.

Watching over people that I love.
(Grateful they’re watching over me as well.)
Enjoying whatever there is to enjoy until the final, time’s up, closing bell.
And hoping - just a reminder - that I’ll be remembered.

Denied citizenship after working in the cannabis industry

What Netanyahu’s historic 5th term means for Israel, Palestinians, and the peace process

Israeli Prime Minister Benjamin Netanyahu won re-election on Tuesday. He claimed a “colossal victory,” but it was a close race. His main opponent, Benny Gantz, initially...

Two working in Colorado’s legal cannabis say their jobs cost them their chances for American citizenship. Both are green card holders who applied for permanent citizenship....

Magic Johnson announced on Tuesday that he’s stepping down as president of basketball operations for the LA Lakers. Johnson is a former Laker, former coach for the team, and...

Longtime writer Judith Viorst is 88 years old. She’s gotten a knee replacement for her knee replacement, found herself listening to to more eulogies than symphonies, and...

Scientists photograph a black hole for the first time

A team of international scientists have captured a photo of a supermassive black hole for the first time. It’s a major confirmation of Einstein’s theory of general...