A wide variety of apples were recently sold at the Santa Monica Farmers’ Market — grown by Mike Cirone. Photo by Gillian Ferguson/KCRW

Fall means apples — in all their glorious diversity — are on display. Evan Kleiman wants you to branch out from your Gala and your Granny Smith. Apples are one of the most biodiverse plants on earth, and there are farmers coming into Los Angeles with more varieties than you can imagine. The apple selection at grocery stores is like Cliff Notes, the most basic and least complex selection. This week, Kleiman spoke to Mike Cirone, who grows 60 varieties of apples in See Canyon, a magical coastal canyon near San Luis Obispo.

Evan Kleiman: How did you get into fruit farming?

Mike Cirone: “I went to Cal Poly and became a Pomology (the study of fruit) major. As part of my schooling, we tended trees and started taking the fruit to farmers’ markets, which were just starting out in California.”

When do apples ripen?

“From early August through late November, but with climate change, everything is ripening earlier.” 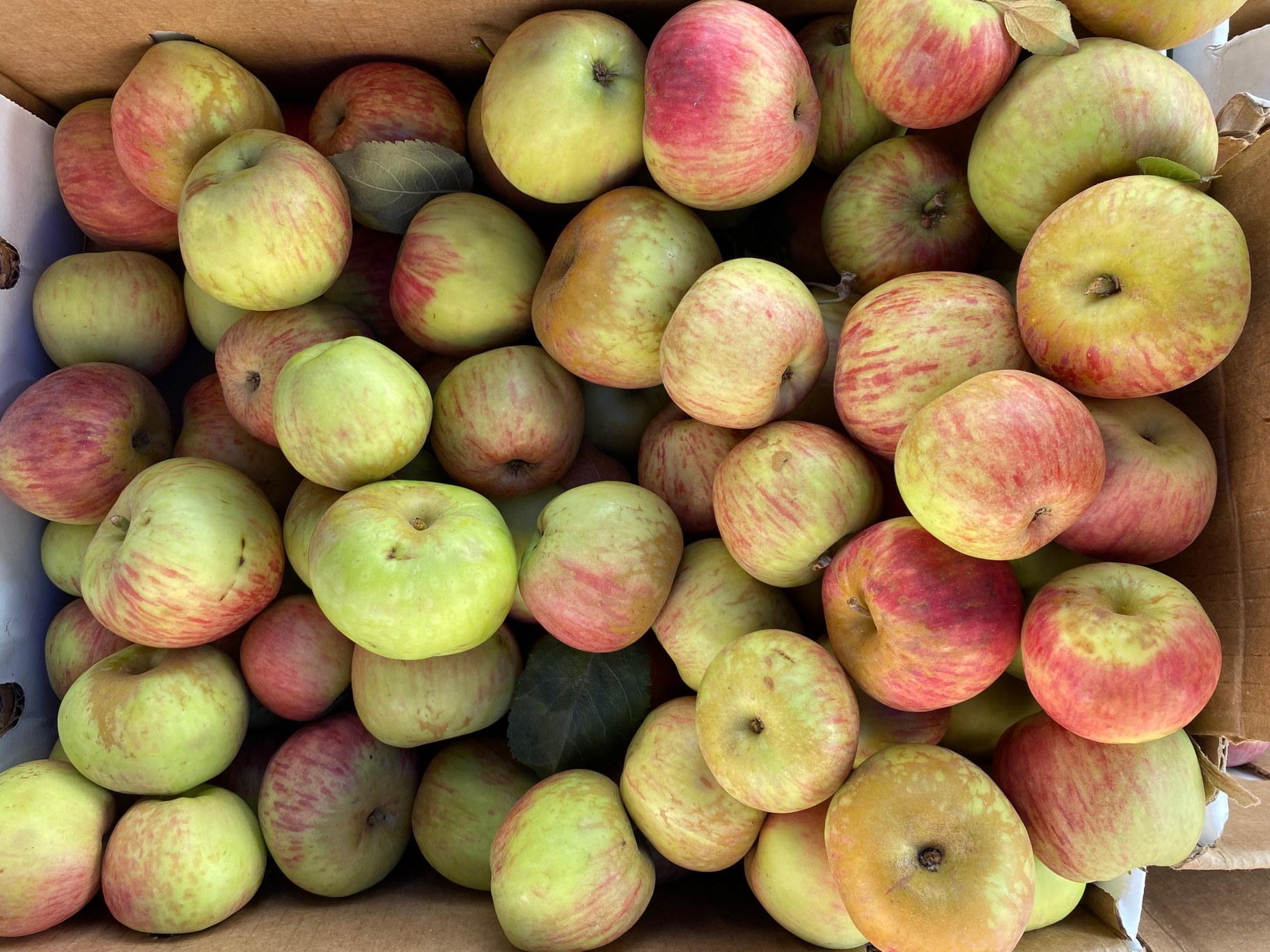 This is just one of 60 varieties of apples that Mike Cirone grows in Sea Canyon, near San Luis Obispo. Photo by Gillian Ferguson/KCRW

What did you bring to the Santa Monica Farmers’ Market this week?

“I have 24 linear feet of one box after another, a total of 16 varieties this week. I set them up so they go from sweet to tart. Not in perfect order, they were: Fuji, Red Gold, Gold Delicious, Mutsu, Criterion, Suncrisp, Winter Pearmain, Jonalicious, Braeburn, Winesap, Baldwin Arkansas Black,  Golden Russet, Enterprise, Gold Rush.”

Do the apple seasons correlate with qualities of varieties?

“Yes. Earlier apples tend to have thinner skins and light, crispy flesh, like McIntosh and Gravenstein. The reason you get a mealy McIntosh is because you’re eating it after it’s been in storage. They are at their best right off the tree.

Mid-season apples are denser like Braeburn, Mutsu, Jonagold and Honeycrisp. 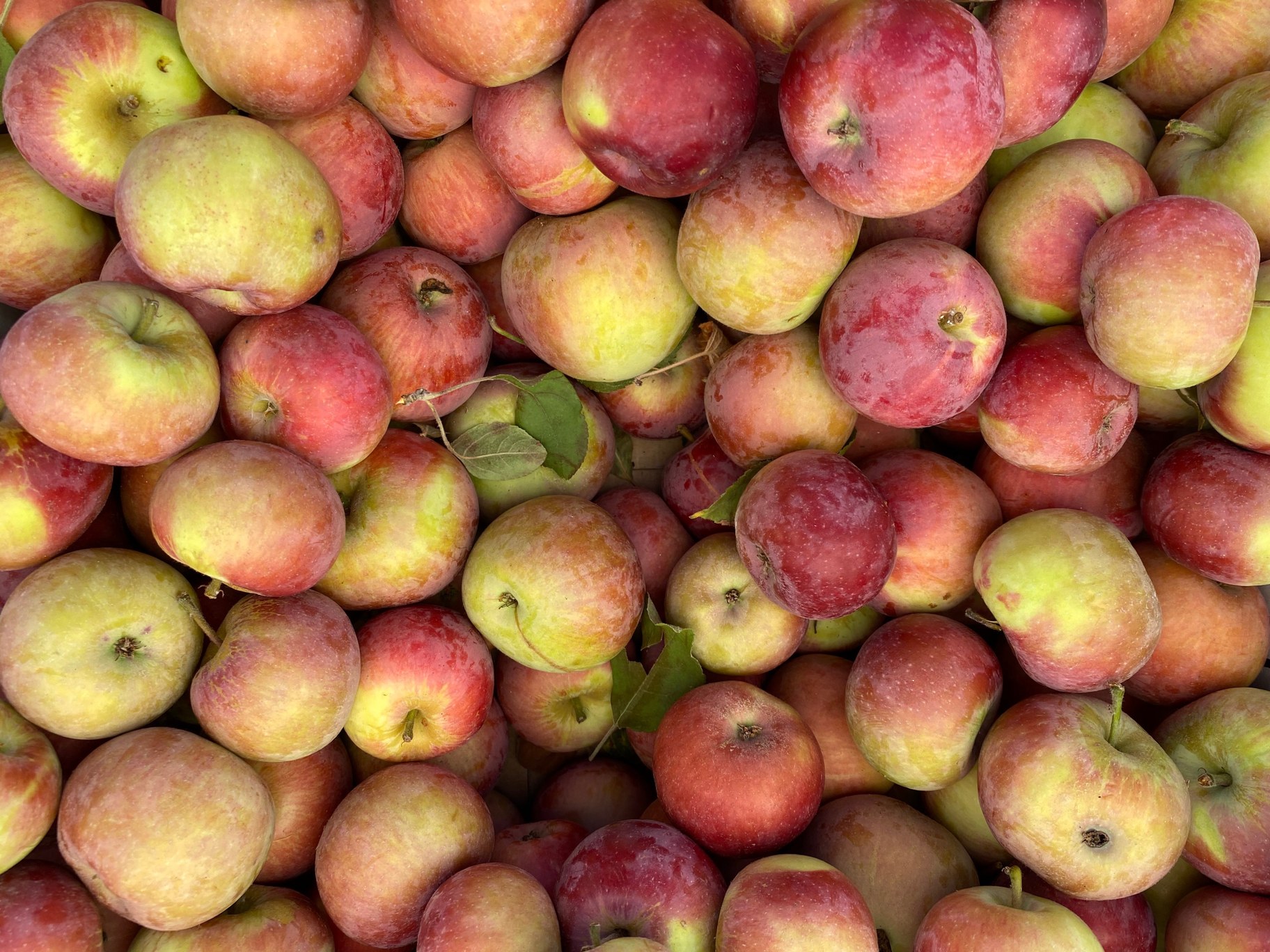 How have tastes changed over the years you’ve been farming?

“In supermarkets you see the patented varieties that are sweet and crisp like Jazz. But at the Santa Monica market, customers want tarter, more complex flavored apples.”

I always use three varieties in my pies: one tart and dense, one sweet and yielding, and one medium variety. If I asked you to put a bag together for me like that, what varieties would they be?

Do people have any apple prejudices?

“Yes, not all green apples are tart.”

For a savory turn, she recommends trying the Persian stew Khoresh-e-Sib.