Portrait of Mark Bradford. Courtesy of the artist and Hauser & Wirth. Photo by Sean Shim-Boyle

LA artist Mark Bradford’s large, abstract paintings typically convey orderly chaos. A colorful collision of lines. Shadows. Texture. From a distance, they can look like aerial maps of city streets. He’s won critical acclaim, including a MacArthur “genius” grant. He represented the U.S. at the Venice Biennale three years ago.

Now the COVID-19 pandemic limits how he interacts with other people. But it’s not stopping his creativity.

Mark Bradford: “That's exactly right. In some ways, I think the first painting that I did, it was like a meditation … telling I was going to be okay. And if I make work out of this, this can be … an artistic time capsule of what I was feeling when this moment was going on. And that's kind of where the paintings came from.

And I think the first one looked more agitated. The color palettes were much more intense, much more reds, much more … violent. I mean, really, it felt like there was blood on the canvas in a way.

And the last one was very dark, kind of moody and dark. But it was such a roller coaster. … I know how to show up and do the thing that kind of calms me down. The practice of making will usually take me out of whatever mood that I'm in — if it's kind of a darker or sadder mood to a better place.” 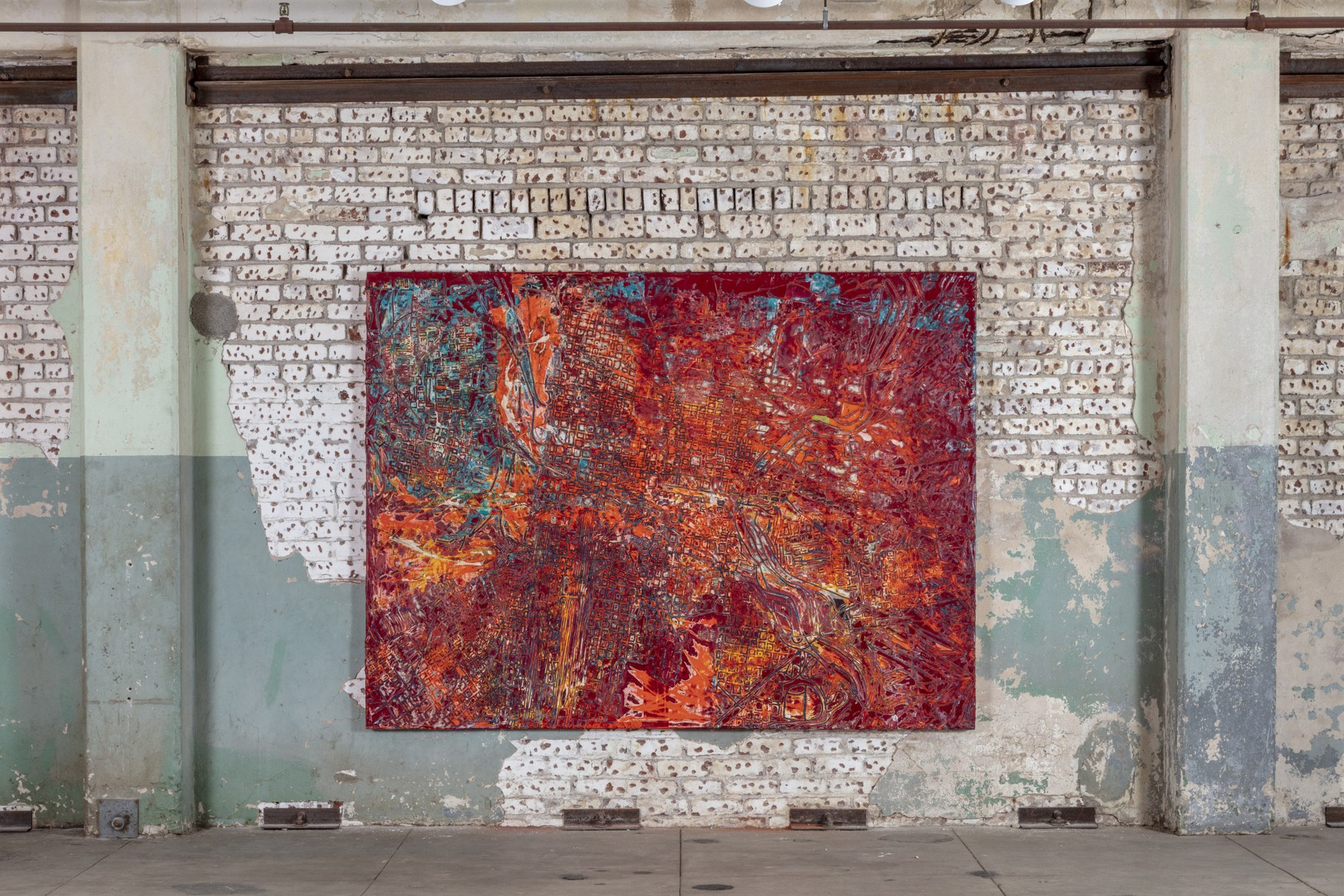 I would think being a painter, you are usually by yourself for long stretches of time anyway. You’re creating by yourself. It's in your head. It's just you and the canvas. How different is it creating under quarantine?

“I was trying to really think about what makes it so different. It really felt like life on Mars in a way. You're in this capsule. And then you're going to explore Mars, but you have to put on the helmet so that you can breathe and the oxygen and the gloves. … Everything from the outside was threatening. Every time Postmates arrived, you would have to wipe it down. Every time you would do this dance with the mailman. Drop it there, and I'll get it. And just the performance of navigating public space, that was the difference.

I remember in the 80s when … finally there was language around AIDS and we had to have safe sex. And really finally they said, ‘Well, it's safer sex.’ So I think that I'm experiencing that a little bit now.”

Is quarantine reminding you of the AIDS epidemic when it first started?

“Yes, yes, absolutely. Because you're young. I was young, and I wanted to live like everybody else. And I wanted to have sex like everybody else. And people take risks. And so how to navigate that risk, I had to go to the doctors and ask them, ‘What can I do? Okay, Monday, you said I can do this. Now it's Tuesday, and you're changing the rules again.’ That made me feel, as so many people, vulnerable.

Your paintings are known for thick layers of paper and paint. And then you excavate and find out what's underneath. And it becomes almost a topographical map. What have you put into these three paintings — from what you see around you — that’s a comment on this current time?

“I think the intensity. It almost feels like in some of the paintings, the grids themselves are melting, actually. And the kind of hum. In some of them, it looks like there's slashes on the canvases. I think I had to repair the first one that I did, because I do remember slashing so much that I went through to the stretcher bar. And I was looking at it and I said, ‘What was that silver color coming through?’ And I said, ‘Oh that's not a silver color, that's actually a stretcher bar that’s silver.’

And it's funny, the sizes are much smaller than I normally work. I work much larger. These are six by eight, which is me. I'm actually six by eight. And the reason why I started to work that size is because I knew that I wasn't going to have any help to turn them. And so I thought well, what's the smallest biggest canvas that I can do and work with by myself? And so, six by eight. And I haven't worked on six by eight canvases in years, maybe 10 years ago, which is kind of nice. It's kind of how I got started.

What is it like working entirely by yourself now?

“Slower. It takes longer. If I had an assistant, he can lay the string down for me. I draw and he can lay it down. And I can go on to something else.

But it's funny. I'll draw this topographical map. And I'll say, ‘Okay, now I'm going to put the string on.’ And I'll put a little string on, and I’ll go on to the next thing. For some reason, I think somebody is going to come behind me and finish the string. And then I turn back around. And there's like, oh, I got to finish it. Oh okay.

But I started off being an assistant in my mom's hair salon. So being an assistant was very easy for me. Assistant has to be three or four steps ahead of you. They kind of prep everything, and then you jump in and do your thing. So I just kind of had to change my thinking, like okay, you're your own assistant, and you're also the head stylist. So once I kind of got it figured out, then it was okay.” 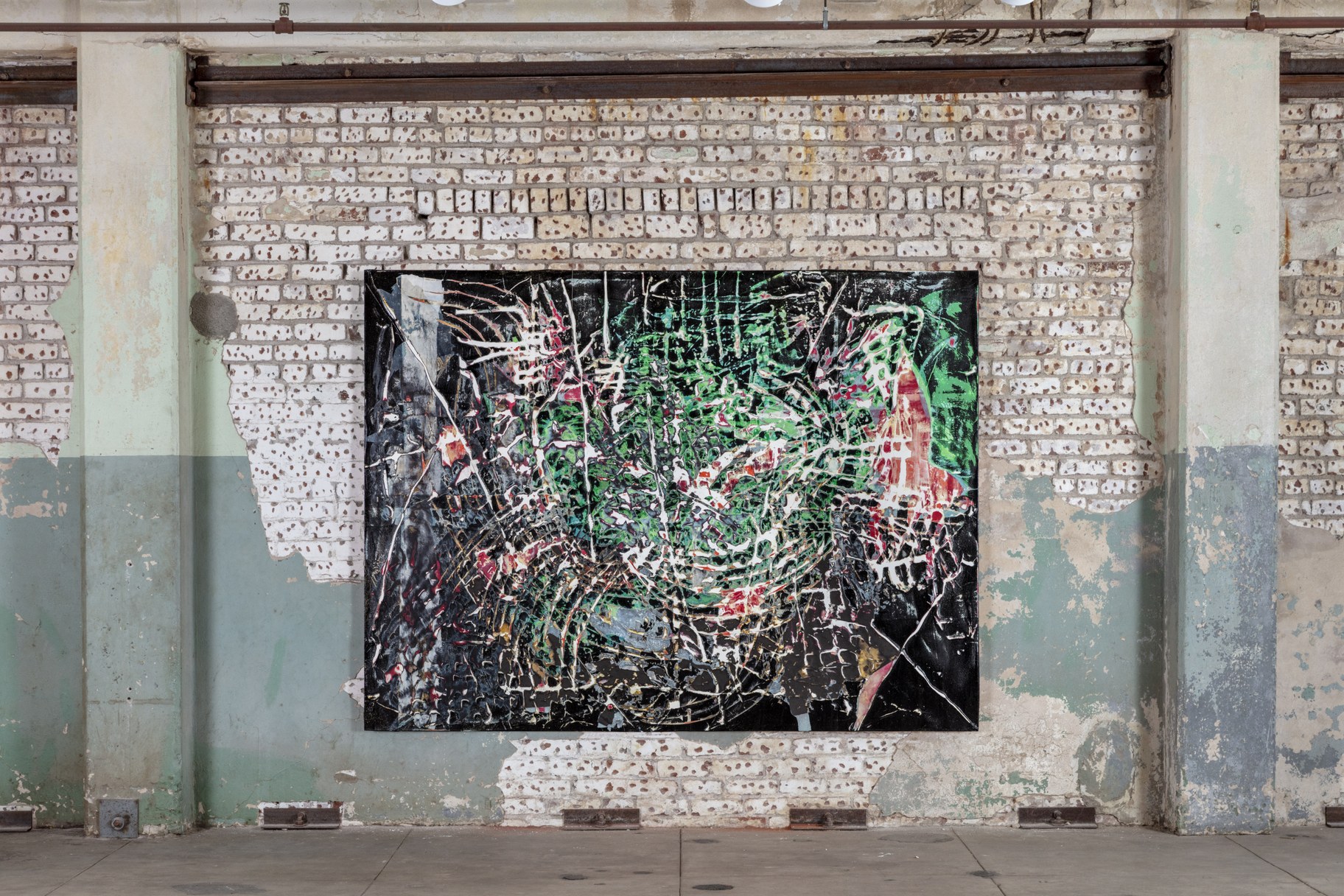 And then ‘Q3,’ I allow it to be dark. Generally, I'll start off with a very dark palette on everything. Then I lay mid-tone brights on top of them. I lay darks back on top. And usually at the end before I sand, it almost looks like a blank piece of black paper. And then I go in, I excavate the bright parts of a painting, I pull them through from the interior. I don't lay ... the highlights on top. It's strange. I don't know why I do that. I'm setting up all these things where I have to struggle. I put all the brights and all the bright colors. And then I cover them up with all this dark paper. And then I sand through to retrieve it. Because I have to work for it. 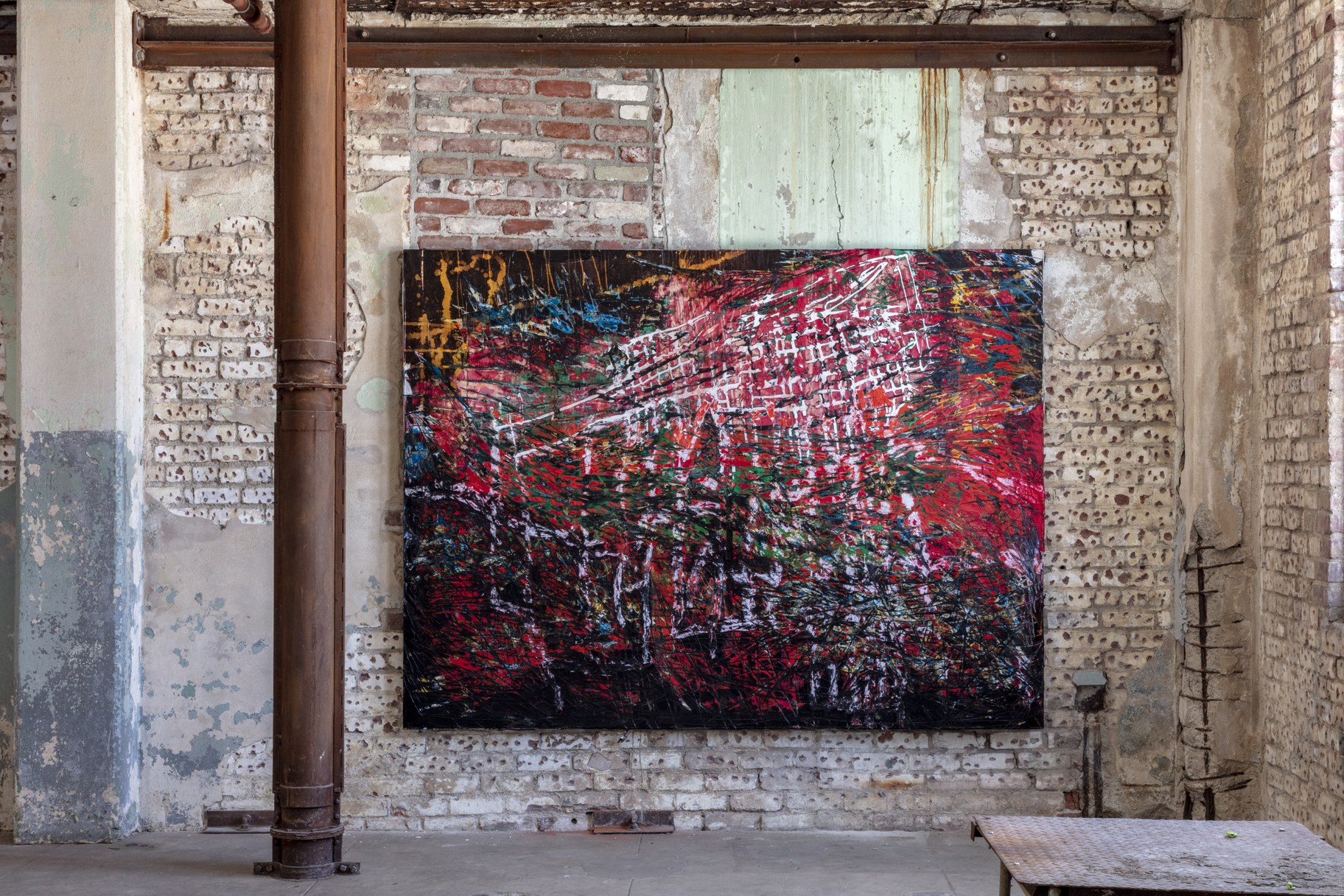 Can you fix coronavirus and institutional racism?

So I always say that when things are invisible, we can feign ignorance. ‘Oh, I just didn't know.’ But as soon as you throw light on something, and as soon as something is visible, you can't say you didn't know.”

What were you thinking about and doing during all the protests in Los Angeles?

“I think it was just a really emotional time for me. I was really saddened by the fact that … this man's body was shown throughout the whole world that it wasn't as valuable as another person's body. And I grappled with that. I really did. I grappled with it.

Of course, I donated money. And I do have an organization, Art + Practice, and it’s in South Central. We do museum shows for the local community and we work with foster youth. It's probably racially 50% Hispanic, 50% Black people that we service.

So I just kind of reminded myself that I've been in this fight for value, and that more people should have access to contemporary art, to museums, to this thing that we call culture. It's why I started Art + Practice where I started it — because I felt that more people should have access to this thing on the way to the store, on their way to the bus stop, on their way to wherever they go.

Why is it that we have to get on a bus and travel across town to have access to culture? I think all of it was going through my head at one time. Still is.”

This COVID-19 crisis has really shone a light on how unequal our culture is. And this is just making it worse, right? That even when it comes to accessing culture, your own work is hidden away.

“ Yes. Well, when I did this online show, the gallery was talking about, ‘Oh everything's gone digital.’ I said, ‘Okay, look, I'm going to do an online show. But I'm going to use the site of the space, of the digital platform, to do a show.’ So in my head, this was just an experiment. I thought okay, I'm going to make a show for online, I'm not going to bother the gallery. There's another part of the gallery that's kind of unused. It’s not climate controlled. No art is really ever shown there. I'm going to put these in a U-Haul, drive them over, and install them myself, and see if I like it. It’s a little bit analog, isn't it?

And me being an artist, I got tired of the well, we're going to postpone, and then we're going to postpone. ... I just thought … I’m just going to go back. I don't have any dates for the future. I don't have anything. I'm just going to make it work. If it has a date, or if it makes it someplace and we can put it up, fine. But if everything gets closed down, and we can't put it up, and it stays in my studio, that's going to be fine too.” 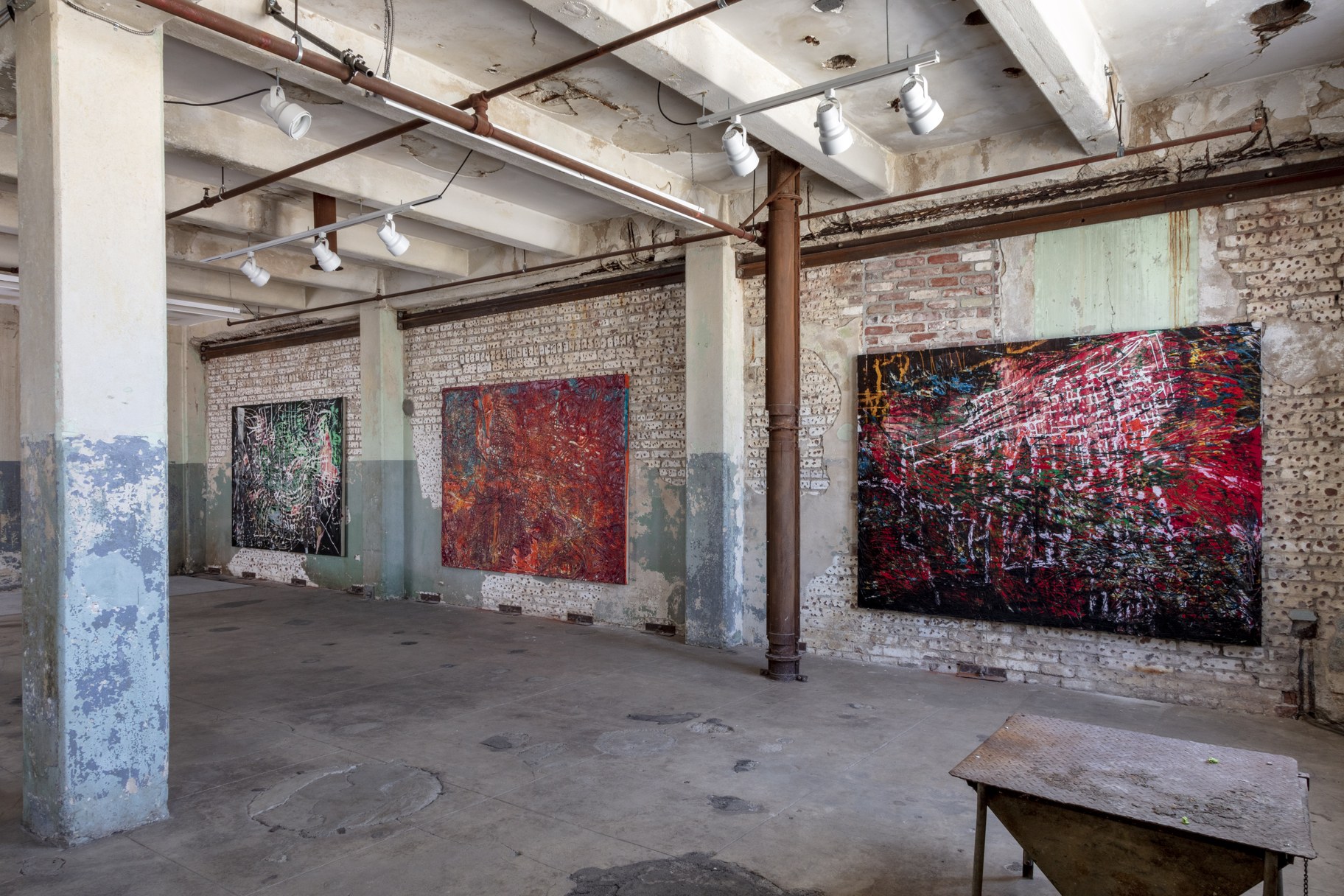 The good thing about this pandemic is that a lot of people have found a way to explore new things or stopped doing stuff that they didn't like doing. They just pare down. Are you finding that?

I think that what I've allowed myself to do is to be okay with not seeing people. Because I do like to see people, even if it's just in a restaurant. I don't have to know you. I just like to see you. So that kind of social interaction, I do miss it. But I've learned to be okay with the silence. And that's been surprising.”