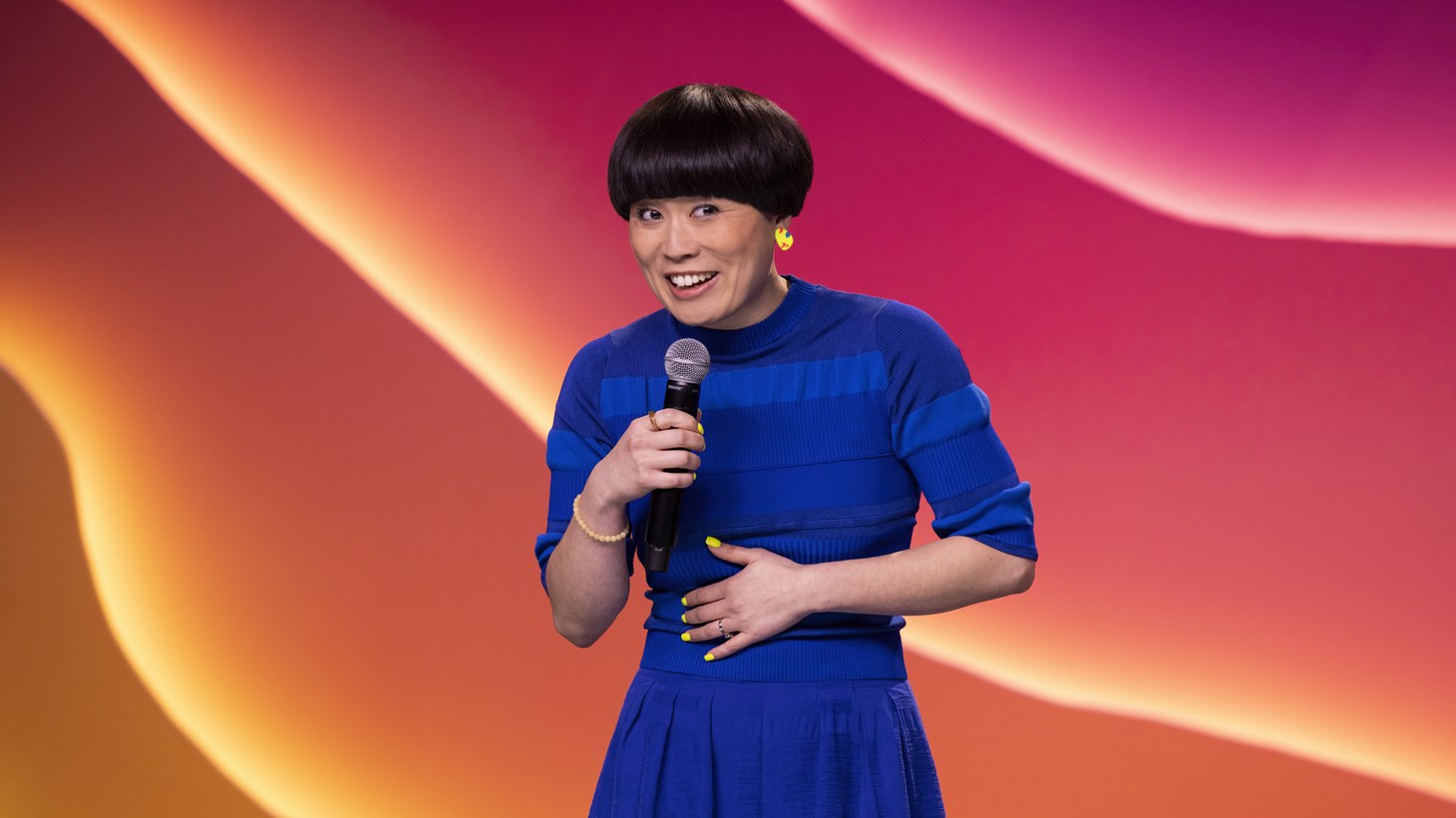 “As an immigrant, I felt like … I was intruding on another culture and other people. Did I fit in?,” says Atsuko Okatsuka. Photo credit: Oluwaseye Olusa/HBO.

LA stand-up comedian Atsuko Okatsuka’s HBO special, “The Intruder,” is about a home invasion, her immigration story, feeling like an outsider, and her family’s struggles with mental illness. It debuts on December 10.

Okatsuka went viral on TikTok for creating the drop challenge, where someone drops to the beat of Beyoncé’s “Partition” while staring at the camera.

The comedian immigrated to the U.S. from Japan when she was 10 years old. She describes it as being bamboozled by her grandmother, who’s also her best friend. Originally, she thought she was traveling to the states for a two-month vacation.

“You know when people try to protect you? ‘Oh, this is a white lie. She's a kid, and maybe she won't be ready to make such a big move, a permanent move.’ But girl, I can count. I can count months.”

It turns out her grandmother was trying to look out for her. At the time, Okatsuka’s mother was struggling with schizophrenia. Together, the three moved into her uncle’s garage in LA. They left Okatsuka’s father behind in Japan.

“So sometimes you go, ‘I think it's the location. We just need to change locations,’ instead of looking inwards,” she explains. “[It was] three generations of women, in the garage, trying to live life.”

Over time, Okatsuka gravitated towards dancing. Her grandmother enrolled her in ballet classes, she joined a cheerleading squad, and choreographed dances. She credits those forms of physical entertainment to helping bolster her comedic style.

“I loved entertaining people. I loved making sure people had a good time. And with dance and comedy, I am a physical performer, I use my eyes to express, even if I'm not moving about a lot on stage. I am always speaking from my toes. A lot of my energy comes from my toes. Every muscle is active.”

Pre-COVID, Okatsuka started dancing in videos for TikTok. One day, she was recording at her grandma’s house when all of a sudden, she expressed interest in what her granddaughter was doing. In their first video together, Okatsuka dances as her grandma hypes her up while playing drums with potatoes.

“It got shared widely because people were like, ‘What is this dynamic? What is going on here? Two people in a kitchen. The younger one is shaking her booty. And I think that's a grandma? Just drumming with potatoes on a plastic bowl?’ She had so much fun,” Okatsuka says.

Taking part in the videos is a far cry for Okatsuka’s grandma, who spent most of her life as a caretaker.

“She always put fun later. She put it off, [saying], ‘It's okay, you have fun. I had an intense life so that you can have a less intense one.’ And it was so cool to see that she was having fun. That became a thing that we like to do as a family.”

The duo later created their drop challenge video, which became a global sensation.

“Beyoncé’s song ‘Partition’ has this beautiful bass drop. It just goes woof woof, and when it came out, I was like, ‘Gosh, this bass drop is so hot and I love it. … I was like, ‘Wouldn’t it be so funny if every time the beat dropped, your body dropped?’”

Okatsuka credits the video for changing the trajectory of her career. Before it went viral, she had done stand-up for 13 years. Now she’s touring and is writing and telling deeply personal stories that she was too afraid to approach before. That includes her mom’s schizophrenia and her experience of an intruder breaking into her home.

“As an immigrant, I felt like one. Like I was intruding on another culture and other people. Did I fit in? And now there was this intruder coming to our house three times in the same day. And so because of the drop challenge and all these other videos, I was able to tour because now I had a bigger fan base that was ready to hear my story,” Okatsuka says.

Atsuko Okatsuka on feeling like a cultural intruder, being a TikTok star

Governor Gavin Newsom has convened a special legislative session in Sacramento to address record-high gas prices and what he describes as price gouging.

How do grad students cobble together enough income to survive in LA?

How grad students make money can be complex and piecemeal — a maze of funding that’s harder to navigate in an expensive place like LA or New York.

Your immunity could be 50% weaker when exposed to colder air, doctor explains

Colder temperatures reduce the body’s ability to fight off viruses. That’s according to a new study in the Journal of Allergy and Clinical Immunology.

Are you in ‘goblin mode?’ That’s Oxford’s word of the year

The Oxford English Dictionary has declared “goblin mode” as its word of the year. It’s the first time a term has been chosen by the public.