The Troubadour has been operating in West Hollywood since 1957, but its talent buyer Amy Madrigali says there’s a chance it could close permanently if there’s no financial relief. Photo courtesy of Amy Madrigali.

Music venues were among the first to shut down because of COVID-19. They’ll probably be the last to reopen because of the ban on large indoor gatherings. In Los Angeles, the Staples Center or the Hollywood Bowl will reopen eventually.

But smaller places might not, including the iconic Troubadour in West Hollywood. That’s where many celebrated musicians got their starts, including Elton John, Carole King and Joni Mitchell.

KCRW: What was the last show at each of your venues?

Jef Soubrian: “The last show was on Sunday, March 15. It was actually during the afternoon, and it was The Mummies. It was special because it was already a little strange to have any show, and we just actually add [sic] the show and close [sic] right away after.”

You knew you were going to close, and so was it a bittersweet afternoon?

Jef Soubrian: “Yes, it was a bittersweet afternoon. But we were [unintelligible] things [are] going to go pretty fast, and we'll be able to take care of the situation and reopen soon. When we had a meeting with all the staff, I was telling them let's try to open by April 10. We saw very fast this is not what was happening.”

Amy Madrigali: “Our last show was on March 11. … It was an underplay with the band Glass Animals as they were releasing some new music. It was a packed house and it was really fun. It was very high energy. Even though that was the beginning of the crisis, it really felt like something we needed. And we've been closed ever since.”

Did you also think it would be short-lived, that you'd be back in business soon?

Amy Madrigali: “Yeah. I think we all thought this wasn't going to last nearly as long. I can't believe we're looking towards the end of the summer now. We closed on March 11. That next day, I started moving shows. I started moving them to May, thinking, ‘Okay, if we get through March and we get through April, and we flatten the curve and everything works, we'll be open by May.’ Which then quickly became not the case. And we remain closed. And the shows I originally moved from March to May are now rescheduling for March 2021. But the reality is we don't even know if those are going to play through.”

You're not certain you'll reopen by March 2021?

Amy Madrigali: “Correct. We don't have any timeline for when we can reopen. Alongside all the other music venues and gathering spaces, [we] are last-phase businesses. … We're not going to be open until there's a vaccine. But ultimately, we just don't know..”

What about doing online shows  or drive-in concerts?

Amy Madrigali: “We are looking into that. … We've had one event so far in the room. Comedian Bill Burr came and did a live podcast from our room. He just sat on the stage by himself, and did his Monday morning podcast for us, and used it as a fundraiser, which was very helpful. And we are looking into other live streaming opportunities. I'm speaking to agents and artists every day. But ultimately, those are small bandaids on a pretty tough situation.

We're down to zero revenue — we closed our doors with no shows, there's no revenue really. And so these are small pieces to try to just hold on.

… We launched a merch store online, which we hadn't done before, so you can get your Troubadour merch online. But again, these are just small pieces to hold on while we're closed.”

Jef, are you in a similar situation, where it doesn't make sense to put on these one-offs because they don't make that much money?

Jef Soubrian: “We are in the same situation. We started a store online where people can buy merch to support. We just started a YouTube channel with some of the close artists we know, [and they] came and did solo mainly or do shows, then we put on YouTube to … keep relation [sic] with the people. But this doesn't bring much help except just to feel the support and the love from the community.

I think it's very important — every artist and band starts in a place like Zebulon, small venues. These places are in danger now. When the pandemic may be over, people [are] going to maybe see then these places are closed. And they will be very sad.” 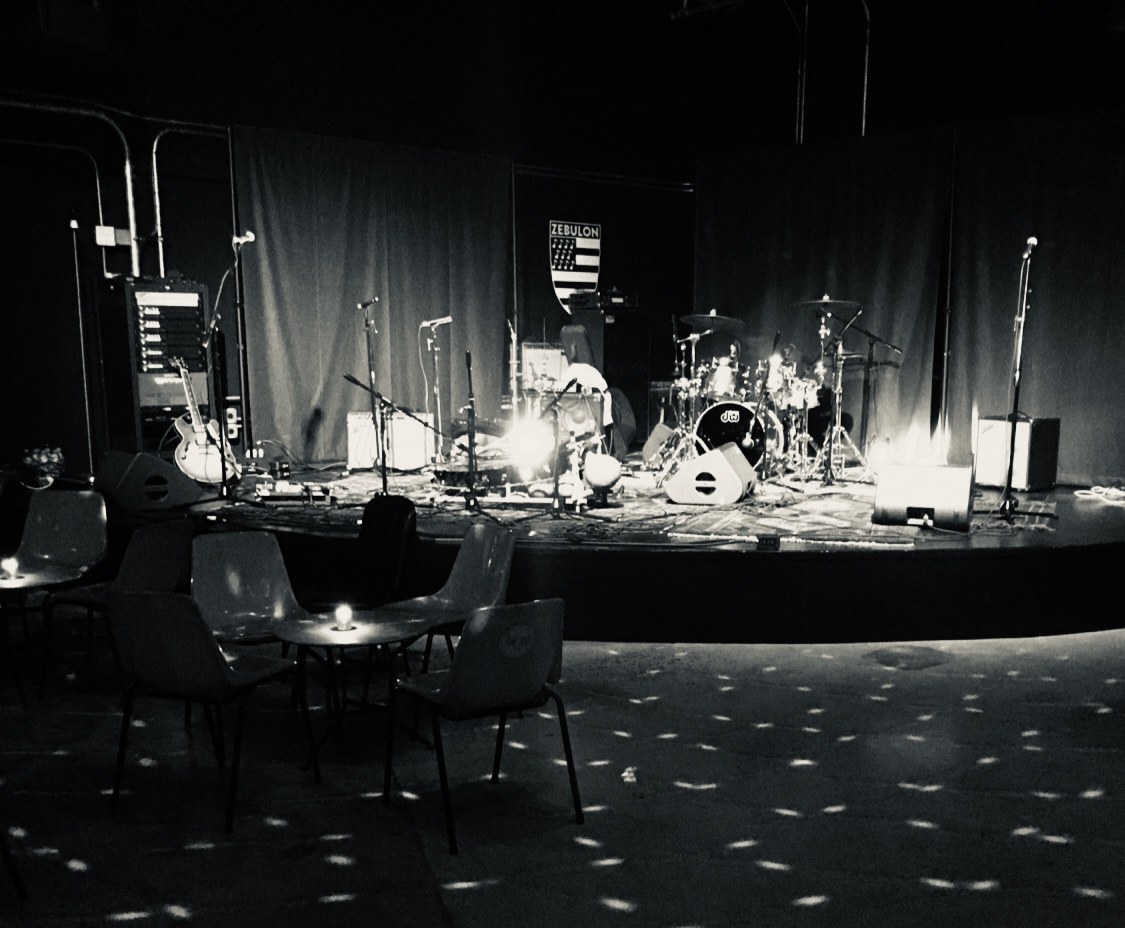 The Zebulon and similar small venues are in danger of permanently closing due to the pandemic, says Jef Soubiran. Photo courtesy of Jef Soubiran.

What is the likelihood that you'll get money from Congress in this next funding round?

Amy Madrigali: “We are working very hard to make that happen, and we are very hopeful. We have NIVA supporting two pieces of legislation. First, the RESTART Act, which is led by Senators Todd Young and Michael Bennet, as well as Representatives Michael Kelly and Jared Golden. The RESTART Act is a long program that would help shuttered businesses like ours that have zero revenue, high overhead and no clear timeline for reopening.

We've been supporting that — alongside those representatives and senators. And another piece of legislation, Save Our Stages (SOS), was just introduced, which is a specific grant program for venues like ours. It's led by Senator John Cornyn from Texas and Amy Klobuchar from Minnesota. And it's a $10 billion grant program for live venue operators, promoters, producers and talent representatives. And so we are advocating for both — both RESTART and SOS.… [They] would be a pivotal lifeline for us.

And we're very hopeful it can get done, but we need all the support we can. And so we encourage any fan of ours, any fan of live music, any fan of the artists you've seen speak out for us, to go to saveourstages.com, to write [to] your representatives, and let them know that you support NIVA, that you support independent music, and send them a letter. We've sent over a million messages to Congress so far, and they need to keep hearing from us.”

What about the big stars that got their start at the Troubadour? They're multimillionaires now. Have they helped in any way?

Amy Madrigali: “Through NIVA and the letter to Congress, over 600 artists signed on behalf of all of us — to support the RESTART Act and now Save Our Stages. … And they've been supporting us … on social media. But not in a direct way at this time.”

These artists haven’t supported you monetarily?

Amy Madrigali: “No, not this time.”

Jef, are private sector musicians helping you? Your artists are different and not necessarily wealthy.

Jef Soubrian: “It's very different, and it’s very important ... the people and the artists and everybody feel kind of responsible of doing something to help small venue business [sic].

It's very important for the community, a place like the Troubadour, a place like Zebulon, a place where people gather together. When people meet and share, especially a city like Los Angeles who's been living since the beginning into entertainment [sic], it should be like some true help coming. … Without make [sic] us feel that we have to fight to survive.”

Do you sense that people see the arts/music as great things but not necessities?

Amy Madrigali: “Yes. I think that arts and music are very important to a lot of people who are privileged enough to be able to come and see shows. … As we look at … a health crisis, it can seem like a much smaller thing to take care of. But our venues … we are gathering places, we're community places, we are homes. We are places of art and culture and expression. We are safe spaces. We're a place of relief from the world outside pre-crisis and hopefully post-crisis, a place where people can come and forget their hardships for just a moment, and create, and be together, and meet each other. The Troubadour has been in West Hollywood since 1957. And we want to continue to be a place where people can come.

Also … we are also economic generators. For every $1 spent at a ticket at a small venue like ours — generates a total of $12 in economic activity to the surrounding restaurants, hotels, taxis, Ubers, and retail establishments. So not only are we lights of creative space and beautiful music, we are economic engines for the neighborhoods we sit in and on the blocks we inhabit.”

Is there any chance that you will have to close permanently?

Amy Madrigali: “It's really hard to think of that. But yeah, that's entirely possible for our venue and venues across the country. The Satellite in Silver Lake just took out their stage. And after 25 years of live music, they're not going to continue shows, which is absolutely heartbreaking.

And as we look to a year or more maybe of no shows, it's totally possible that our venue and other venues don't make it. According to an internal NIVA survey, 90% of our venues will close permanently in a few months if we don't get some sort of funding or some sort of relief. I don't know any business that can survive the months we've already had to endure, let alone a year or more without any income, losing between 85 and 100% of their income.”

How to improve remote education in the fall

New demonstrations have erupted nationwide in response to the continued clashes between federal agents and activists in Portland. KCRW looks at some of these protests, and...

The shift to online learning took a heavy toll on many Black and Brown students within LAUSD. Some didn’t have laptops or Wifi at home. Others didn’t show up to virtual...

Fans celebrate the return of pro sports, even as players test positive

Less than a week into the restart of the Major League Baseball season, COVID-19 has struck. At least a dozen players and coaches with the Miami Marlins have tested positive....