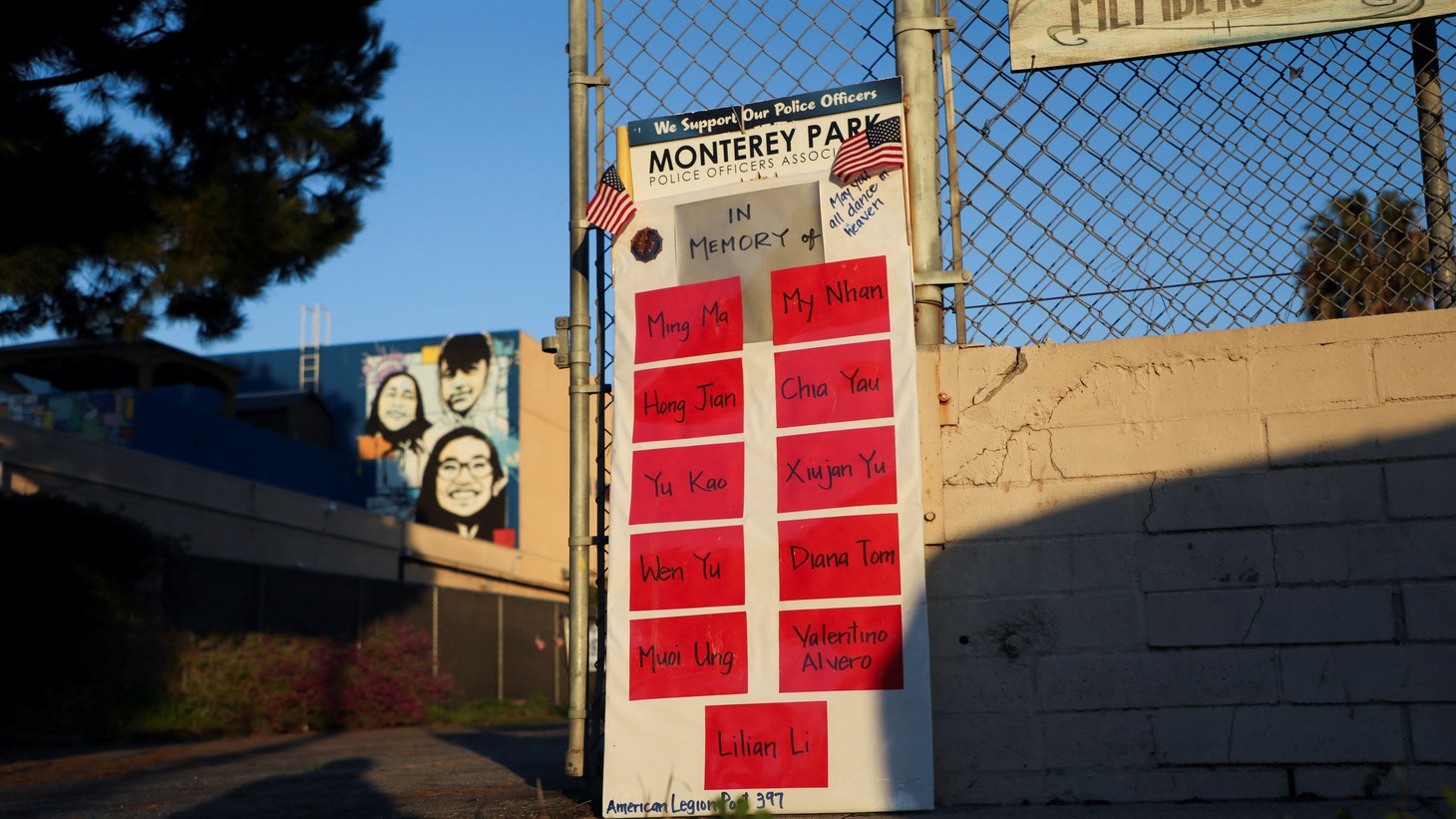 The names of the 11 people killed are written on a sign, as people gather for a candlelight vigil after a mass shooting during Lunar New Year celebrations in Monterey Park, California, U.S. January 24, 2023. Photo by REUTERS/David Swanson.

Tonight, Vice President Kamala Harris will be in Monterey Park to meet with family members of the victims of Saturday’s mass shooting. Eleven people died. All of them were in their 50s, 60s, and 70s, and have now been identified. KCRW remembers each of them.

My Nhan was identified by law enforcement officials as the first victim in the shooting. The 65-year-old was shot outside the dancehall in her car. She immigrated from Vietnam in the 1980s.

Her niece Fonda Quan told ABC News, “She was just really caring for everyone and anyone. And when I think of her, I hope a takeaway for everyone is just be kind to people, care for people. You don't know what their backstory is. Sometimes a smile … kind words can make their day. And that's how she lived her life.”

Xiujuan Yu was 57 years old. Her niece Kathleen Fong started a GoFundMe for their family. On the page, she shared a photograph of her aunt, taken two days before she died. Fong said that her aunt immigrated from China, that she and her husband were working hard to support their two daughters’ college education, and they took on a lot of work to make ends meet.

Yu-Lun Kao, 72, was a dance hall regular. Some of his friends, who started a GoFundMe, called him “Mr. Nice.” They said he welcomed newcomers to the studio with open arms, and gladly offered to teach them basic moves. He loved to dance so much, they wrote, “even if it was only him on the dancefloor.”

Kao’s dance partner spoke to ABC, saying he shielded her from the bullets: “Just in my heart, I was thinking I see him all the time. From now on, I cannot see him no more. You see this person just yesterday, and now you don’t see him no more.”

Valentino Marcos Alvero was 68. His family said in a statement that he was a loving father, a dedicated son and brother, and a grandfather who loved his granddaughters fiercely. They said he adored ballroom dancing and his community, and he was the life of the party.

His daughter Kristenne Reidy told KTLA, “I like to think that he danced his way into heaven. This place was just a big part of our lives, and I never thought it would take this kind of turn.”

Ming Wei Ma, known as “the heart” of the Star Ballroom Dance Studio, was 72 years old. She helped manage the studio and taught there.

His friend Eric Chen told CBS that he was the first person in the building to rush the shooter: “He was extremely respected, very beloved, very caring, teacher, instructor, extremely kind human being, and that’s very much missed by everybody in the Star Dance community.”

Diana Tom’s family members created a GoFundMe, where they describe her as a hard-working mother, wife, and grandmother. Her family says she loved to dance and “she was someone who always went out of her way to give to others.”

Wen Tau Yu was 64 years old when he died. His son told the New York Times that Yu went back to school a month ago to become a pharmacist. His son admired him for always striving to better himself. He said his dad’s books and notes are still strewn around his desk, and that it’s “heartbreaking.”

The four other victims in the shooting are:

KCRW remembers each of the 11 people who died during the mass shooting in Monterey Park after the city’s Lunar New Year celebration. All of them were in their 50s, 60s, and...

The U.S. Justice Department, California, and seven other states are suing Google over its digital advertising business. At the center of the lawsuits is the company’s online...

Buyer beware: Used car for sale might’ve been in a flood

California’s recent storms have damaged hundreds, if not thousands, of cars. Many of them could end up for sale again, and sometimes the damage is not obvious.