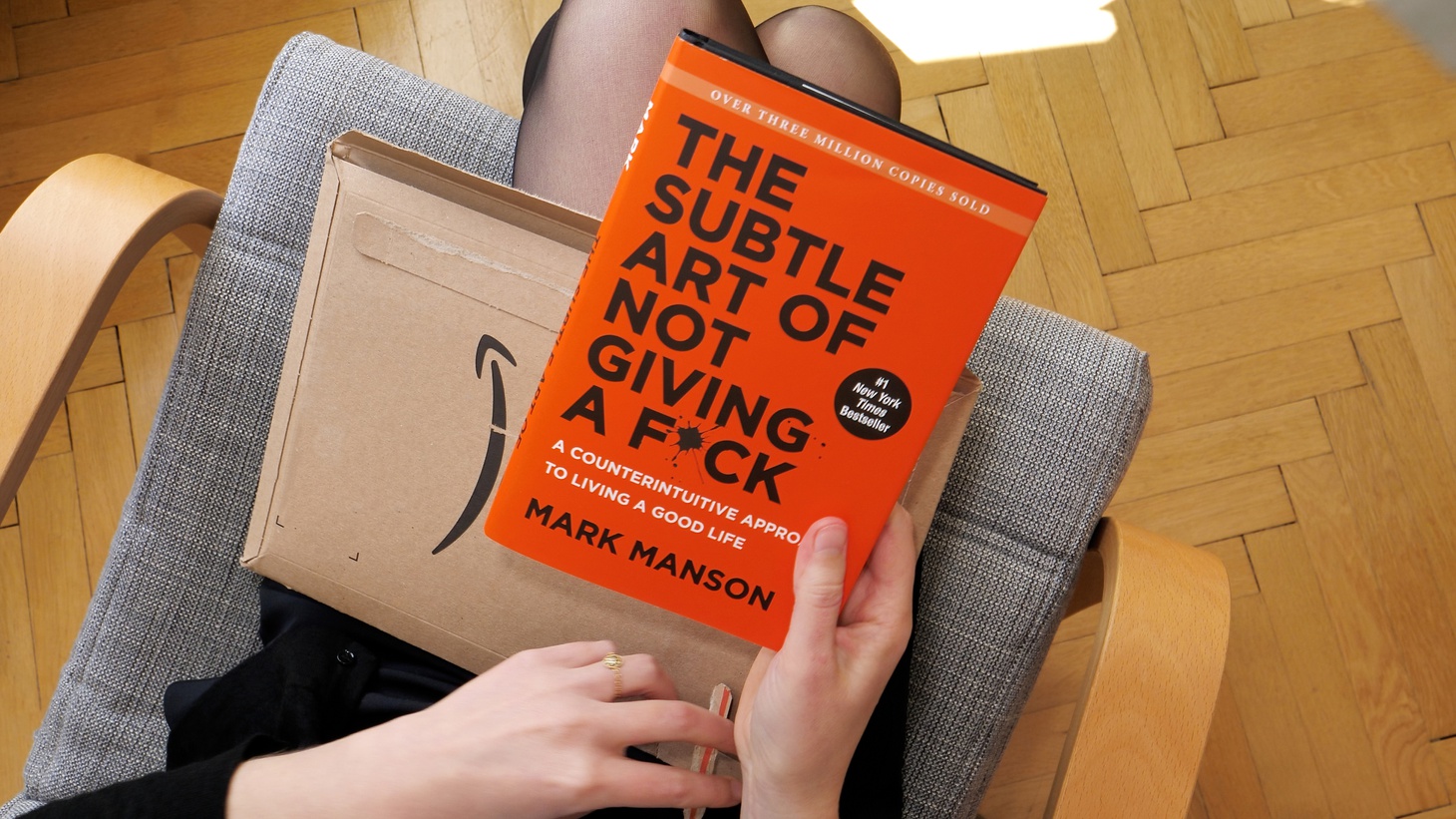 Mark Manson’s book, “The Subtle Art of Not Giving a F*ck: A Counterintuitive Approach to Living a Good Life,” is now a documentary film available for digital download. Photo by Shutterstock.

Amid all the drama in the recent Kevin McCarthy speakership fight, California Congresswoman Katie Porter sat coolly reading a book to troll Republicans. It was Mark Manson’s “The Subtle Art of Not Giving a F*ck: A Counterintuitive Approach to Living a Good Life” (2016). In it, Manson argues that we should focus our energy on the few things in life that are worth caring about. To date, it’s sold more than 10 million copies. It’s also now a documentary film available for digital download.

Manson says the book is ultimately about reexamining one’s values and priorities, especially in the current age of social media and rampant technology. “What are you choosing to put your attention on? What are you putting your energy into? And is that an optimal use of your attention?”

While he admits technology can serve as a much-needed reprieve from everyday life, it can inundate users with too much information.

He posits that overconsumption of information can make our minds lazy, lethargic, and unhealthy.

“We have to develop a culture of what I call an attention diet, of making sure our sources of information are high quality, nutrient-dense, based on facts and research and studies, and that we're not over-consuming as to overwhelm ourselves.”

Manson says he grew up in a thriving, middle-class family in the 1990s, when everything was about getting the newest and latest gadgets. But very quickly, he learned that wasn’t his key to happiness.

“Everybody was emotionally dysfunctional and miserable inside. So I think I was blessed with the learning experience very early on — that that doesn't solve anything. Getting a new car and a swimming pool doesn't fix you.”

In his early 20s, Manson found Buddhism and started developing his philosophy of letting go and sitting in his emotions. Later on, he did his own research to understand how happiness and emotions function. He found that much of that ties into the ability to sit with negativity.

Then through his work starting a relationship advice website, he realized he needed to be honest about his own experiences with romance. That made him realize the power of vulnerability.

He continues, “There's something about human nature, where when we see somebody being very open and honest and vulnerable about how they've suffered, it reminds us that we're not alone in our suffering. That creates a sense of intimacy.”

Manson also argues that no one is special, and in fact, people have more in common than they think.

“When you tell yourself that you need to be special, it puts an unreasonable pressure on yourself. Because at the end of the day, 99% of what you and I experience, it's stuff that millions of other people experience as well.”

He adds, “It's actually a very comforting realization of ‘Oh, my problems are not special. They're actually very, very common. They're very normal. They're very human, and the only reason it doesn't feel that way is that we don't really talk about them.”

He also pushes back against the idea that someone needs to be special to make a difference.

“Believing that is actually what keeps a lot of people from trying to make a difference. They're like, ‘Oh, well, what can I do? I'm just Joe Schmo.’ When you realize you don't need any special qualification to go try to make a difference in the world, you can just go do it and see if it works. I think that's a liberating concept.”

So what is there to give a f*ck about? Manson points to the simple things he prioritizes in his own life: maintaining close relationships with friends and family, as well as taking care of the body by sleeping and eating well.

“People who come to self-help material have this idea that the solution to their unhappiness or their anxiety or problems is, there's got to be like this big, fancy complex idea out there that they're just not understanding. What I found is that if you're getting enough sleep, you're spending time around people you love, you're spending a few hours each day doing something you like, that solves 90% of it. You don't need a book to figure that out.”

KCRW remembers each of the 11 people who died during the mass shooting in Monterey Park after the city’s Lunar New Year celebration. All of them were in their 50s, 60s, and...

The U.S. Justice Department, California, and seven other states are suing Google over its digital advertising business. At the center of the lawsuits is the company’s online...

Buyer beware: Used car for sale might’ve been in a flood

California’s recent storms have damaged hundreds, if not thousands, of cars. Many of them could end up for sale again, and sometimes the damage is not obvious.