“Last semester, it was hard to stay motivated when you're in your room in your house, doing your schoolwork on your own. But I also know right now, almost everyone knows someone who's been affected by COVID. So I know, by me doing school online, it's kind of helping decrease the spread,” says Sydney Perry. Photo courtesy of Sydney Perry

The fall semester starts on August 18 for more than 600,000 students in LA’s public schools. Instructions will be entirely online, and teachers will keep attendance. Other districts in the area have already started classes.

KCRW has heard from parents and teachers about their perspectives on returning to online learning next week.

Now two students share their thoughts. Sydney Perry is starting her junior year at Los Alamitos High in Los Alamitos. Brooke Ivy is a senior at West Ranch High in Santa Clarita, and she started classes this week.

So far, Ivy says distance learning has been tough, and there’s less interaction with teachers and students. But she says in comparison to the end of last Spring when students first went online, classes are now more organized.

Perry goes back to school at the end of the month. “I am nervous because I don't know how they're going to be teaching online, and if I'm going to be able to get as much as I would, if I were to go in person, out of my education,” Perry says.

Both Perry and Ivy see math as being the most difficult subject to learn online.

“Math is the hardest, just not being able to go into class whenever you need or already being in class and just asking a question about a certain part of the problem. It's definitely harder to have to shoot an email to ask a simple question, and it's hard to move forward when everything builds off of each other,” Ivy says.

Ivy sees school as not just a place to learn but somewhere she can grow socially: “I think a big part of it is how we communicate with other people and drive ourselves to better ourselves.”

Both are part of extracurricular activities, which have found ways to go online.

Last year, Ivy enrolled in a new leadership class, where she learned about mental health and community building. Before the pandemic, she worked at a local senior center. Due to COVID-19, Ivy and her classmates are now unable to visit the center, but still find ways to learn more. She’s also a cheerleader, but the traditional fall football season has been cancelled.

“So that's half my senior year. So it's kind of just sad that I'm not going to have my first rallies and football season and everything that comes along with that,” Ivy says. 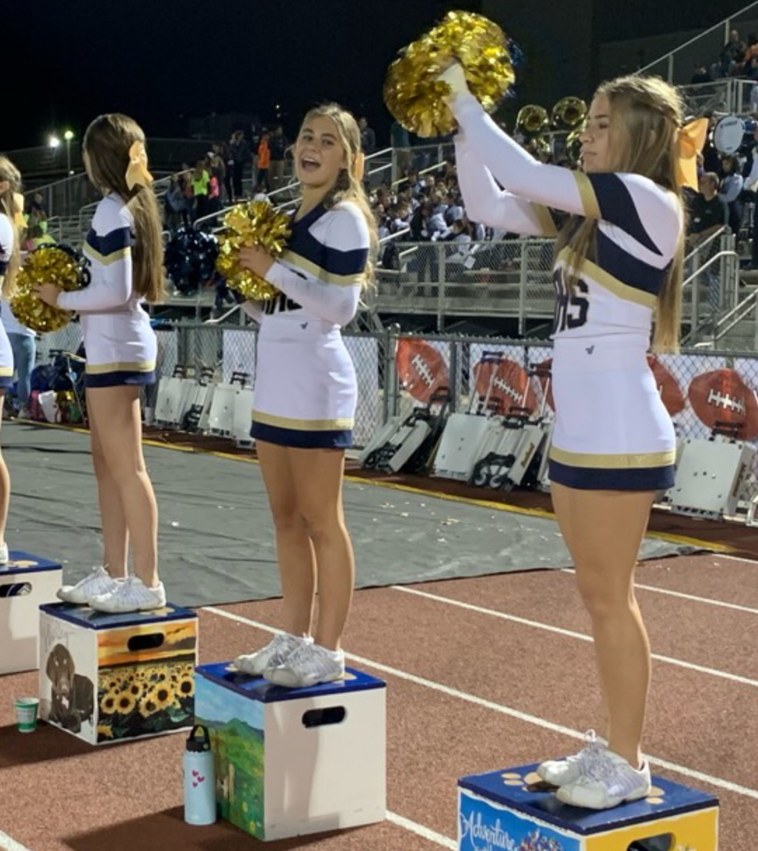 “It's kind of just sad that I'm not going to have my first rallies and football season and everything that comes along with that,” says Brooke Ivy (center). Photo courtesy of Brooke Ivy

Perry is part of the rowing club at her school. Although the pandemic has put a hold on group rowing, she’s still doing it solo.

Ivy is still applying to colleges and has started taking virtual campus tours. Unlike many of her peers, she was able to take the SAT before tests were postponed. For the time being, she plans on going to school and having a regular first year of college.

Perry also works with incoming freshmen at her school, and she’s been trying to assure them these are abnormal times, and it’ll all get better.

“I know for them, it may be harder going to a new high school, but of course not getting that first day of school experience, and you have to do it through Zoom,” Perry says. “We're definitely trying to encourage them to stay positive throughout all this and have a strong start to high school.

Despite not being able to attend classes, Perry sees the benefits of distance learning by helping curb coronavirus contagion.

“Last semester, it was hard to stay motivated when you're in your room in your house, doing your schoolwork on your own. But I also know right now, almost everyone knows someone who's been affected by COVID,” Perry says. “So I know, by me doing school online, it's kind of helping decrease the spread.”

How are students feeling about school starting soon?

KCRW talks with Sydney Perry, who will soon start her junior year at Los Alamitos High, plus Brooke Ivy, a senior who already started classes at West Ranch High.

What are retail companies doing with their unsold clothes during this pandemic?

Some companies are trying to sell their leftover clothes to employees (plus their friends and families), then send the items to recycling facilities. Some are burning their...

The owner of LA’s Chateau Marmont recently announced plans to turn it into a members-only property by the end of the year. It’s fallen on hard times since the pandemic took...

Critics review “Sputnik,” a Russian-language film about a space explorer who returns to earth with an alien parasite inside him; “Boys State,” about an annual program where...