A sign about coronavirus facts at a recent gathering of Chinese media and others at the Hilton San Gabriel Hotel, hosted by Democrat Ed Chau. Photo by Benjamin Gottlieb/KCRW

The west coast is an area to be concerned about when it comes to the novel coronavirus. Washington state has nine deaths, and reports say hundreds in Oregon may have been passing the virus around unknowingly.

Governor Gavin Newsom warned California on Monday: “There’s no need to panic, but there’s every reason to be prepared …  Assisted living centers and the like -- that’s where we have to be most vigilant.”

LA County has one confirmed case of the coronavirus. This person traveled  from China, was identified at LAX airport, then immediately taken to a hospital for treatment. He didn’t go out into the city, and had no contact with anyone other than airport staff and health care workers (who were protected because they knew he was coming). That’s all according to Dr. Sharon Balter, Director of the Acute Communicable Disease Control Program for the LA County Department of Public Health.

Monitoring thousands of people in LA

Balter says a lot of people are being monitored in L.A. County, including travelers from China and others who’ve had contact with known cases.

“We've received information [from the federal government and other jurisdictions] about more than 3000 travelers and have made attempts to contact all of them,” says Balter.

The numbers are changing all the time, she notes.

Who should get tested?

“I'm pleased to report that we are testing. These kits test quite a variety of people. In addition, more ways of testing are coming online all the time,” Balter says.

Many people want to get tested, but she says this doesn’t make sense, even if there’s an infinite testing capacity.

Balter says people who should get tested are those who’ve 1) traveled to places where there are many known cases, 2) had contact with known cases, 3) have symptoms.

“As with any respiratory virus, most people will experience mild symptoms with this virus. So for people in L.A. who have mild symptoms … what we're advising is they call their doctor rather than go in. And if their symptoms are mild, they can probably stay home. And with rest and fluids, [they] will get better.”

Balter says most people will get better if they’re dealing with a cough and fever right now, but you should call your doctor early if you:

“Anybody with severe symptoms needs to go in. But people who are more vulnerable, the elderly, the immunocompromised, people who have medical conditions -- they should talk to their doctor about when to come in,” advises Balter.

Is there an unfounded panic in LA right now?

“We want people to take it seriously. But there's absolutely no reason to panic,” says Balter.

She advises people to do common sense things:

- Stay home if you’re sick.
- Don’t send your kids to school if they’re sick.
- Wash your hands all the time.
- Try not to touch your mouth, nose, eyes.

How widespread will coronavirus be in LA?

“It is reasonable to assume that it's going to come to LA. ... The exact extent of it, I think everybody is still trying to gage,” says Balter. “And that's why we're encouraging people to get prepared, to have plans for teleworking, to have plans in place … to take care of your kids if they're sick and can't go to school.” 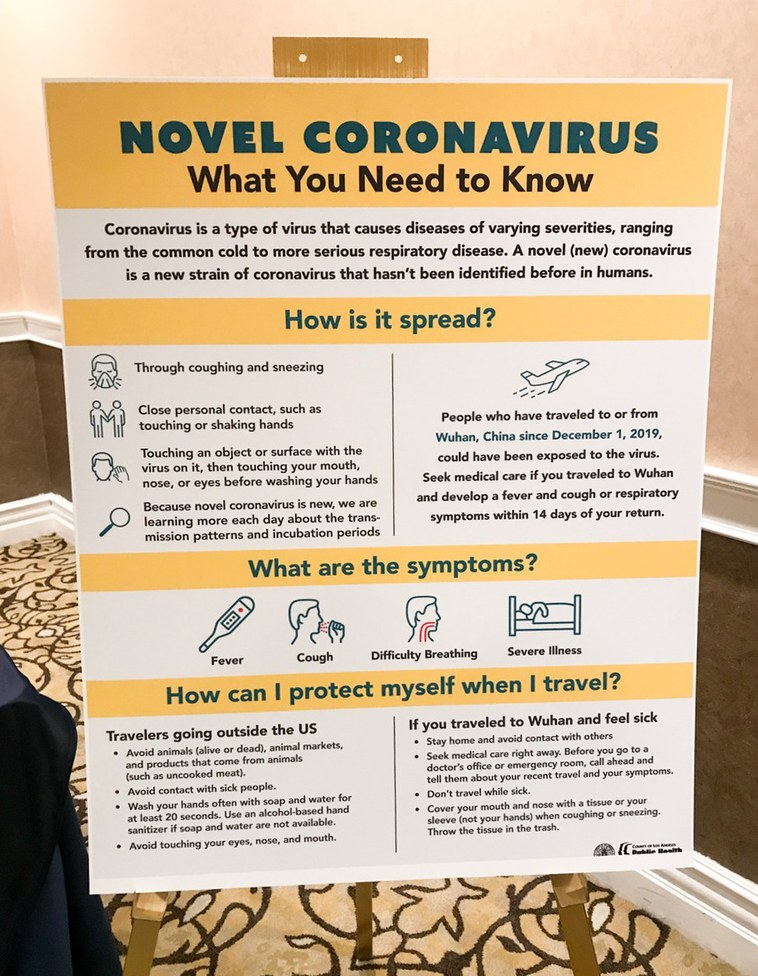 A sign about coronavirus facts at a recent gathering of Chinese media and others at the Hilton San Gabriel Hotel, hosted by Democrat Ed Chau. Photo by Benjamin Gottlieb/KCRW

Voting on Super Tuesday, outside money pouring into California races

Voters in 14 states and one territory head to the polls today for primary elections. Nearly 1300 delegates – about one-third of the total – are up for grabs today.

Sharon Balter of the LA County Department of Public Health says lots of people are being monitored here; and you should get tested if you've traveled to places where there...

Public health officials say if you think you might have the coronavirus, then stay home. But that can mean a loss of income, which many people likely can’t afford.

As prices spike for Purell, make your own hand sanitizer for cheap

With all this talk about coronavirus, many stores are sold out of Purell. On Amazon, bottles that typically sell for about $5 are going for upwards of $20. To avoid the...

HBO’s “Avenue 5” is a comedy set 40 years in the future, on a luxurious spaceship on the way back to Earth from Saturn. Something goes wrong, and 6500 passengers are trapped...