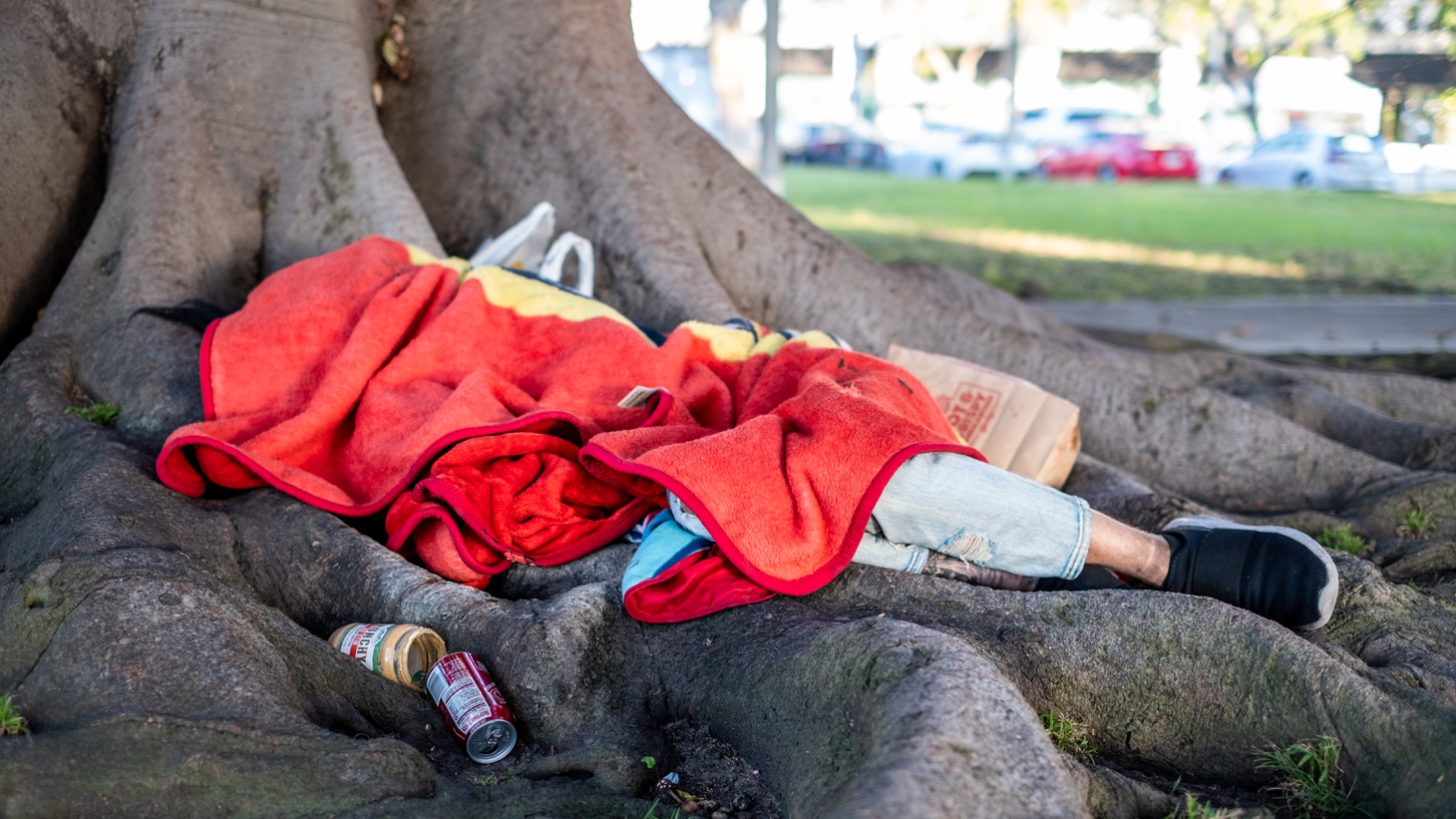 An unhoused person lies covered in a blanket under a tree in downtown Culver City, Feb. 25, 2022. Photo by Amy Ta/KCRW

Governor Gavin Newsom has unveiled a new plan to provide mental health and addiction support for Californians, especially those who are unhoused. The Community Assistance, Recovery and Empowerment (CARE) Court would give judges more power to push people struggling with addiction and severe mental illness into court-ordered care. Details are still scant, but it would clearly require a massive expansion of the state’s social services network, because it would potentially force thousands of Californians into involuntary treatment.

Unhoused populations across LA are dealing with different problems, according to Dr. Susan Partovi, the medical director of Homeless Health Care Los Angeles. For example, she says that many in Skid Row and the rest of downtown LA display psychotic behaviors, some of it caused by meth use. As a result, it’s caused some to exhibit signs of schizophrenia.

If Newsom’s Care Courts proposal is approved by the state legislature, NYU sociology professor Alex Barnard says it could force the mental health system to do better and create accountability. Currently, he says the system typically offers short-term and voluntary solutions.

“If CARE Courts are going to do something positive, it's going to be filling in this middle ground of making sure that people are receiving really persistent offers of services that's there to catch them if there's a moment where they're more open to services, or if they are dealing with substance abuse issues, [or] if they had a really bad day. So they're thinking about recovery and I think that's one piece … that is promising,” Barnard tells KCRW.

Some organizations are against the idea of CARE Court, however, including Disability Rights California, which argues that the kind of coerced care Newsom is proposing is not treatment, and that it would disproportionately hurt low-income communities. Barnard says there’s not enough information on the proposal to make a decision about the plan. Although he notes that there are laws, including conservatorship rules, that already allow for involuntary treatment.

Partovi says she is not advocating for more legislation, but thinks that CARE Court could provide in-depth care for those in need.

“We're advocating for what we call housing that heals. And that can be for any spectrum of where someone is at in their mental illness. And so we're hoping to develop that culture in California and really push for that,” she says.

Bernard adds, “The status quo [in California] is not one that's really protecting people's civil liberties. And so trying to come up with a mechanism by which people are connecting to longer term treatment — rather than just cycling through really short-term 5150 holds, for example — if CARE Courts was able to do that, that actually would probably be a positive for civil liberties rather than a restriction of them.”

Critical to providing care is building trust and a relationship with clients that Partovi might meet on the streets or in the clinic.

“What's really become a lifesaver is these long-acting injectables that are antipsychotics — and we're not forcing people [to use them], we're building relationships with them. And during their times of lucidity, they understand sometimes that this might help them — and we use layman's terms — with their disorganized thoughts, or their insomnia, or their anxiety, or their voice. So once that gets stabilized, then we've been able to get people into interim housing really quickly,” she explains.

She adds, “We're not coming from ‘let's sweep everybody up [and] get them out of our streets because they're an eyesore.’ It's more like we've met these people, we've developed a relationship with them. And every time we see them, it breaks our hearts.”

Moving forward, Bernard says the biggest question swirling around this new initiative is what sort of infrastructure California plans to build.

“Do you expand voluntary services that are in the community? Do you expand residential treatment? Do you do an all-of-the-above strategy where you try and build across a whole continuum? There is a lot of money coming from the governor for sure. But I don't know if there's been the level of reflection about where the greatest need is, and whether that has to be at that most restrictive, locked-hospital-bed-kind-of level of care.”

Could Putin be prosecuted for potential war crimes in Ukraine?

The International Criminal Court is investigating possible war crimes committed by Russia in Ukraine. Last week, Russian troops shelled a maternity hospital in the city of...

Abortion rights are threatened in red states. Here’s the latest in Texas and Missouri

The Texas Supreme Court on Friday ended a lawsuit aimed at killing the state’s law that bans abortions as early as six weeks. Nearby red states are trying to pass similar...