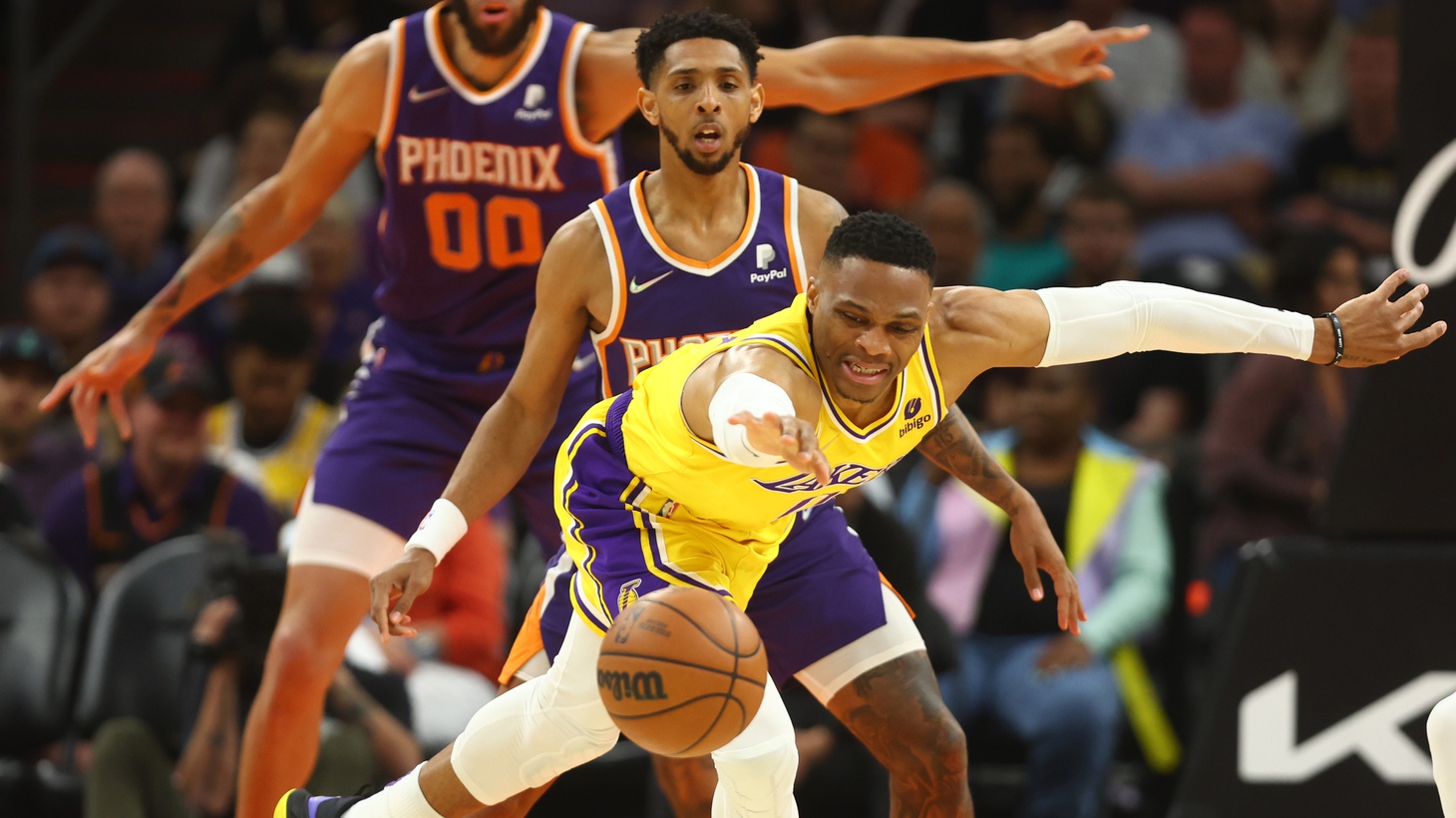 Los Angeles Lakers guard Russell Westbrook (0) battles for a loose ball against the Phoenix Suns in the first half at Footprint Center, Apr. 5, 2022. Photo by Mark J. Rebilas-USA TODAY Sport.

The LA Lakers were eliminated from making the NBA playoffs on Tuesday, while the LA Clippers are barely clinging to their spot.

The Lakers’ loss might go down as one of the franchise’s greatest failures, according to Matt “Money” Smith, co-host of “Petros and Money.”

“To come in 11th place in a conference, that's as bad as it gets. They just couldn't stay healthy,” Smith tells KCRW. “It's a colossal failure and unfortunate.”

As a result, Smith predicts some of the team’s management might lose their jobs, such as head coach Frank Vogel or general manager Rob Pelinka.

He adds that players, including LeBron James, didn’t put in the effort to win the game.

“It’s LeBron’s fault. It’s Lebron’s and his agents who run an agency called Clutch Sports. They're the ones behind the Russell Westbrook trade, which was a complete disaster,” Smith explains. “They're the ones that put a lot of these players together, [who] just decided they didn't feel like playing defense. And that led to just a miserable season, injuries,[and] not playing on both sides of the floor. It really was just a rough go for Lakers fans this year.”

Meanwhile, there’s good news: Baseball season officially kicks off on Thursday. Could the Dodgers go to the World Series?

In a March press conference, LA Dodgers manager Dave Roberts announced the team would win the World Series this year. Smith says it’s way too soon to be making statements like that, and much can happen between now and the final series.

“Instead of saying, ‘If our pitching stays healthy, if we get production at the bottom of the lineup,’ Dave just went with, ‘We're gonna win the World Series. I believe in this team, I believe in this roster. I believe we have everything that it takes to go all the way to win our division. To win a few rounds of the playoffs, and ultimately, win a seven-game series against the best team from the American League.’”

He adds, “On paper, absolutely, they do [have a chance], but they don't play a game until Friday. It's a little premature to be making proclamations.”

As CA enters heat wave, snowpack is a fraction of what it should be

The western United States is the driest it has been in at least 1200 years. How can California mitigate drought conditions?

Hot pot: Flavorful broth is meant for sharing and customizing

Hot pot, is about cooking raw ingredients in a shared pot of flavorful broth. It’s a low-stress way of meal prep — only the broth is made in advance.

The LA Lakers aren’t heading to the NBA playoffs. But at least Dodgers baseball is almost here, and manager Dave Roberts is confident his team will win the World Series.

The mass shooting at Sandy Hook Elementary School birthed an online community hostile to reality, one that fed off itself despite evidence to the contrary. That’s according...