Late night talk shows have begun this fall, and while keeping COVID-19 away is a big concern, there’s another problem. Musicians who are late night staples, such as Reggie Watts and the Roots, wrote an open letter to network heads at ABC, NBC, and CBS asking for fair pay, fair health care, and fair residual payments. And their bands are all led by men of color. This comes at a time when live TV musicians are renegotiating their union contract with the networks.

KCRW talks about this with Deadline Hollywood’s David Robb, who’s been covering the Hollywood labor union for about 40 years; and drummer Guillermo E. Brown, who’s part of the house band for “The Late Late Show with James Corden” on CBS.

KCRW: Guillermo, you signed your name to this letter. What are the big things you're asking for?

Guillermo E. Brown: “I did sign my name to this letter. The #RespectUs campaign is about three main things. We're trying to make sure that musicians are treated equally and with respect. And we're looking for fair compensation, fair residual on streaming, and fair health care.”

By fair, are you comparing yourselves to what other workers — writers, actors, hosts — are getting?

Guillermo E. Brown: “We're comparing ourselves to wage increases, health plans, and residuals that writers or any number of the other guilds get on streaming residuals, yes.”

You're not just the musical accompaniment. Sometimes you're involved in the skits, such as last month’s drum off with actor Joseph Gordon Levitt. Is it true that you didn't prepare for that bit?

Guillermo E. Brown: “Absolutely not prepared for that. … To expect the unexpected is how I approach every day. So that makes it fun.”

Are you compensated for the extra work?

Guillermo E. Brown: “I am compensated for that. We're not necessarily talking about my individual experience. But when that particular bit gets ported to an online platform, say, an ad-based service like YouTube or a subscription service, I don't receive a residual for that. Multiply that by the many, many other union members who are part of this contract, and you start to see the problem.” 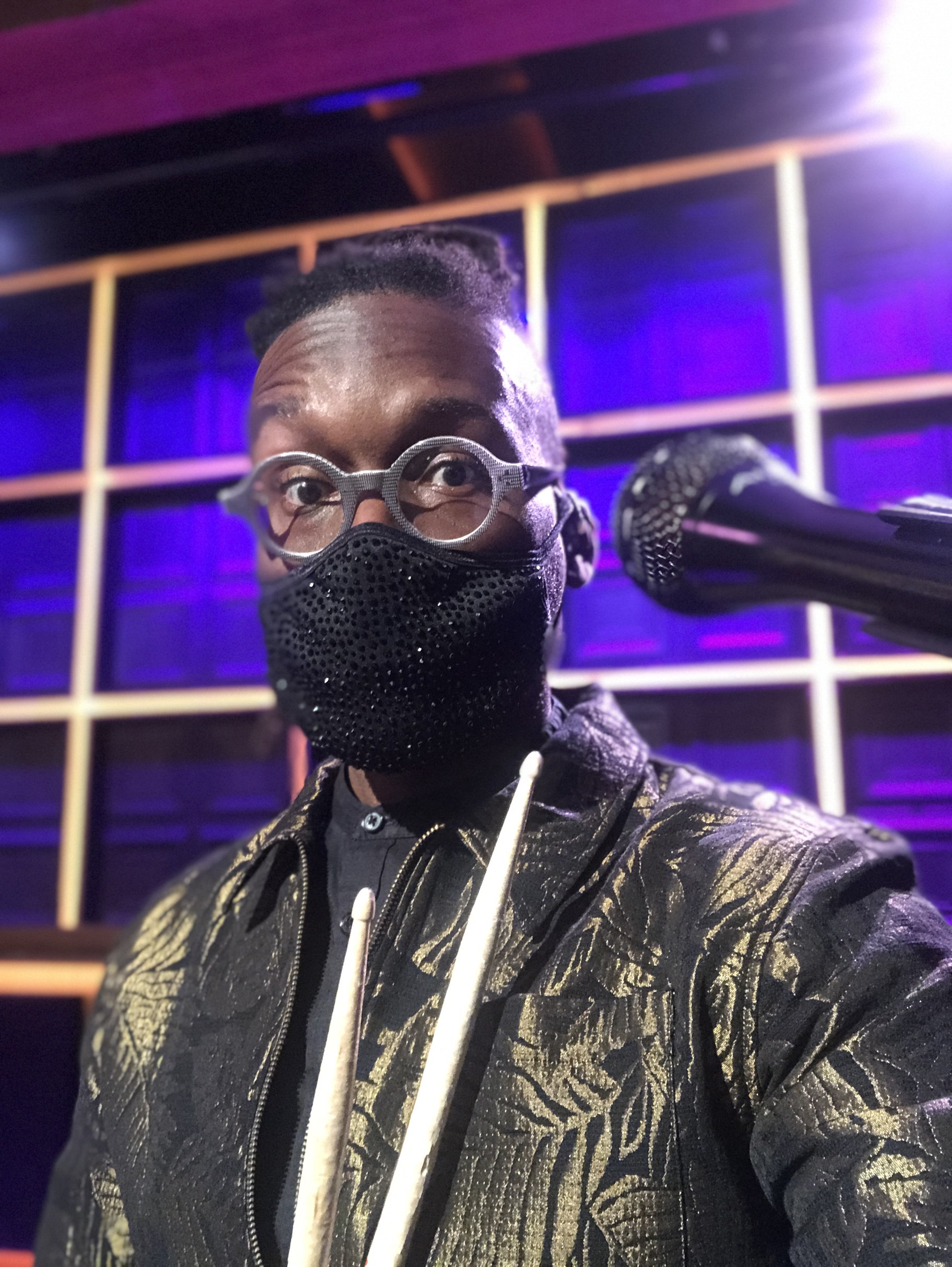 “The #RespectUs campaign is about three main things. We're trying to make sure that musicians are treated equally and with respect. And we're looking for fair compensation, fair residual on streaming, and fair health care,” says Guillermo E. Brown. Photo courtesy of Brown

David, can you put the residual issue into context? When something is excerpted on YouTube and played a million times, are performers entitled to a share of that?

David Robb: “Yes, according to the musicians union, the American Federation of Musicians, they get no residuals for reuse on ad-supported streaming services, whereas the actors get 11% of the show wages for the first year. So do the writers. The second and third years and years after, they also get revenue after that, which the musicians don't get anything. So they want parity with what the actors and writers are getting.”

Why don't musicians get residuals?

David Robb: “Because they can't get it at the bargaining table. They tried to get this in a separate contract that covers episodic television. Last year, when their shows were repurposed on streaming services, like YouTube, they couldn't get that done either. And that was the main goal of the contract negotiations. They didn't get it then and they're trying to get it now for the late night and the comedy shows.”

What's the argument for not giving them that — if members of SAG-AFTRA or the Writers Guild or Directors Guild of America get compensated?

David Robb: “The Writers Guild, the Directors Guild, the SAG-AFTRA, they have what's called pattern bargaining. When one gets it, then they all get it. So whoever goes first, if somebody gets a bump, then the rest are entitled to the same bump. The musicians union is not part of that pattern bargaining. They have to reinvent the wheel every time.”

So it's not just residuals. It's also health care and wages that are also problems?

David Robb: “The contract that the three networks — ABC, CBS and NBC — are negotiating with the musicians union, they have not gotten a pay increase since 2016. The other unions have all gotten their 2.5-3% pay raises. Their pay has gone up dramatically in the last five years, whereas the musicians union is static.”

Guillermo, if you haven't gotten a pay increase in four years, how does that affect you?

Guillermo E. Brown: “I don't know if focusing on me is the best thing here. Because I'm not talking about my specific situation and my relationship with my folks, which is super good and super awesome.

But we're talking about a larger issue and something that I face or orchestra members who play on the Tonys or … guest members of a band … so it's a whole group of us who are affected.”

Most of the band leaders for late night, with the exception of Seth Meyers’ show, are men of color. Lateline hosts have relied heavily on them — and band members who are people of color — to talk about these issues after the deaths of George Floyd and Breonna Taylor, and all of the upheaval across the nation now. Do you feel a responsibility to talk about these issues?

Guillermo E. Brown: “Processing emotional content and leading that with humor or healing energy, that's the function of Black music in our culture. And whether the performer is white, Black, Asian, Latino, or indigenous, we're saying that the music that's being used on these shows is Black music. And it generates millions of views and millions of dollars in advertising revenue. And whether the news is happy or sad, the music is still there.

… What we're talking about is not individual slights or micro aggressions. But we're talking about something structural. When networks take work done by a certain group of us, musicians in this case, and value it less and therefore worthy of less than singers, actors, or writers and directors, there's a problem there. That's what we really want to focus on in this #RespectUs campaign.”

You've had ongoing negotiations over salary and residuals and health care. But now that we are in this moment of racial reckoning, is this the first time that your union and colleagues have brought it up in this particular context?

Guillermo E. Brown: “This seems to be the first time. Yes.”

Do you think that the networks will listen and respond differently this time?

Guillermo E. Brown: “I can only hope.”

David, what has been the official response from the networks on this issue?

David Robb: “They don't comment during negotiations — ever that I know of.

… I think they'll have to listen to it differently. Whether they'll act on that or not, we don't know yet. But the letter and the union say that this lack of economic parity is due to systemic racism. And they say that their members are the most diverse of all the unions, and that those things are connected.”

Just looking at what they're paid and how they're not getting residuals, would you say that's true?

David Robb: “I don't know if it's true. They had the negotiations with the studios and networks for the episodic television last year. And they didn't raise this issue of systemic racism then. Since then the world has changed. And it's become an issue at the front of everybody's minds now. And I think it will carry a lot of weight. Especially when you look at the band leaders on these shows … a lot of these people are saying this is systemic racism, and it's showing itself in the lack of economic parity that they have with their fellow performers.”

Since you've raised this campaign and these issues, what's it like working day to day on set?

Guillermo E. Brown: “My band, my show, it's a great show to work on. And people are talking about these issues, and folks think it's unfair. On other shows, you have Cher and Gwen Stefani tweeting about this stuff. We hope that everyone can kind of join us and face the networks and really, really bring these issues to light.”