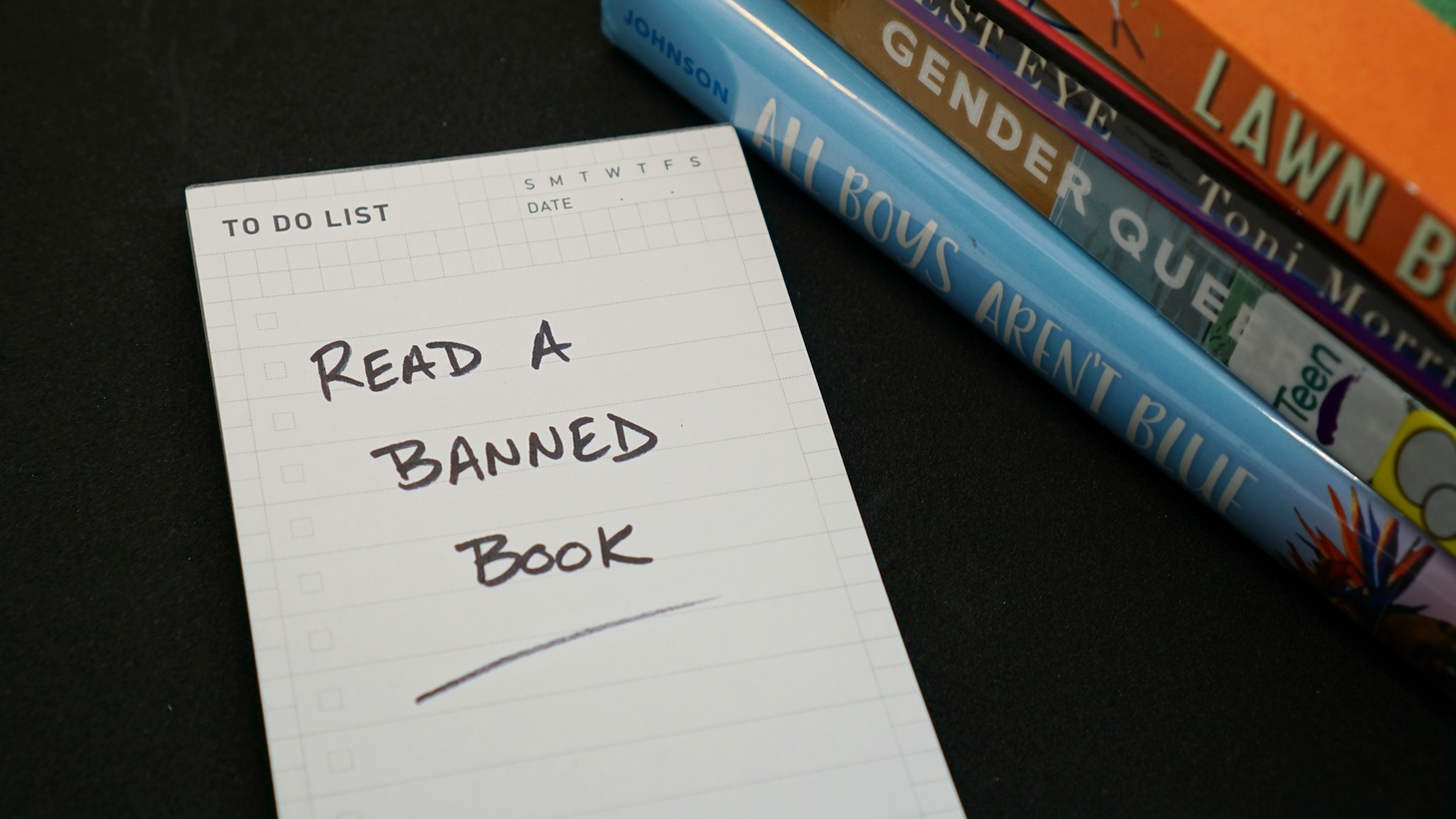 A to-do list says “read a banned book.” Dave Eggers says, “How do you ban a book? They took it off all of the shelves in the classroom, they took them out of libraries. … So that's a book ban when you make it unavailable to all students. … These are going on all over the country, and it's very similar playbook.” Photo by Shutterstock.

Districts in roughly half the states banned more than 1,100 books total during the last academic year, according to a report from the nonprofit Pen America. Dave Eggers’ “The Circle” was pulled from high school reading lists in Rapid City, South Dakota, so he went to investigate and wrote about it for The Washington Post.

“The Circle” is a dystopian novel about the dangers of technology and what it’s doing to humans, he tells KCRW.

“This is the first time it's been banned too. It's not really typically controversial in a way that would affect teachers and schools. But [school officials] found a few pages, a few passages that had vague sexual content, and that was enough, I guess, to pull it.”

While “The Circle” was quietly pulled from senior reading lists ahead of the 2021 school year, Eggers didn’t learn about it until this May. He then turned to a local bookstore called Mitzi's. He offered to pay for copies of his book and four others that had been banned alongside it. Would the store give those books to any high school senior who wanted one for free? Mitzi’s agreed. Eggers says a few days after he heard of the ban, he had given away more books to fourth-year students in Rapid City than were originally assigned.

“I went out there a week or so later and I met so many seniors. … And the seniors in high school were so eloquent and so upset about being condescended to. … They could be drafted. They’re beyond the age of consent in South Dakota, oddly enough, so they're allowed to have sex, and they're allowed to be married at 17. But they can't read about sex in a book. And so the students were just livid about this contradiction and hypocrisy,” he says.

Who pulled “The Circle?” Eggers explains that in spring 2021, four new members joined the school board. All of them touted their church memberships and promised to “reverse some of the woke-ism that they thought that the schools were suffering from.” He adds that they benefited from parents’ frustrations about COVID restrictions.

He explains that before the academic term started last year, a teacher (who still hasn’t been named) emailed the principal saying they should examine some assigned books that seemed to have inappropriate content. So the principal pulled the books to not upset the new conservative school board.

Though the board didn’t issue the order, an atmosphere of fear was going around, Eggers says.

‘They [teachers] think, ‘Okay, who's going to be upset by this? … We're going to have to watch our back.’ And even though the teachers had been careful to offer alternatives. These books were an array of books that seniors could choose for advanced English and contemporary literature classes. So they didn't have to read any of these books. They were just on a list of possible books to choose from.”

Parents made no known objections to the books, he points out.

The ban was done preemptively, then it got attention because at a school board meeting, members were discussing what to do with old equipment and property, and 185 copies of those five banned books were deemed to be destroyed.

“They were not going to donate them, sell them back, give them to the library. They were intent on destroying these five books, and then that got everybody's attention.”

Some teachers rallied and became vocal with their leadership, including at school board meetings.

“Then there are a lot of teachers that, frankly, told me and others that they couldn't risk their jobs, that they felt like the atmosphere is too toxic … and also that they feared retaliation online because it has been a much more toxic political atmosphere in town for the last couple, three years. And so teachers are understandably afraid for that kind of backlash.”

Since then, the 185 copies were in storage. Eggers recently learned that they all “mysteriously disappeared in the last week.”

“No one knows where they've gone. I don't know if there's any sort of security camera footage or if they've shown up in Mar-a-Lago or what, but they are gone. That just made its way into the local press, just to give it another weird twist.”

However, the school board president says it’s a mischaracterization to say the books are banned.

“This is semantics. How do you ban a book? They took it off all of the shelves in the classroom, they took them out of libraries. … So that's a book ban when you make it unavailable to all students. … These are going on all over the country, and it's a very similar playbook.”

He points out that Kate Thomas, the president of the Rapid City school board, has seven children who are all homeschooled.

“She is a devout Christian, which is not a problem at all, but she has not invested in the school system. … And yet she has created this culture of fear that is dictating what highly educated, very experienced teachers are assigning in their classrooms to seniors. None of them have anything to do with Kate Thomas or her family. So it's very strange that she is exerting this outsized influence on a town and a school system in which she's not remotely invested.”

Meanwhile, Rapid City’s Board of Education has changed its makeup again. One member who was elected last year left. Another was unseated in elections this year by a former teacher who’s now the board’s first openly LGBTQ member. A Black woman has also been elected to the board for the first time. So is the pendulum swinging away from conservatism?

“People are optimistic, they were very happy with that outcome. … But I think that the teachers that I've talked to since school started, just in the last few days, have said it's very tense, especially those that spoke up. The leadership that was perpetuating these bans is very chilly toward those teachers. … Teachers have left. And it happens in all these school districts … teachers that expect to have freedom over their reading lists, and be able to teach as they see fit are being constrained, questioned, judged, and run out of their districts. And they go to greener pastures where they get more freedom and they're treated like professionals.”

The California Air Resources Board is expected to finalize Gov. Newsom’s order that bans the sale of gas-powered cars by 2035. People will still be able to buy a used gas...

When Rapid City got a new conservative school board, a principal preemptively banned Dave Eggers’ “The Circle.” The author uncovered an atmosphere of fear among teachers.

Moms for Liberty: From parents rights in Florida to national political stage

School boards nationwide are now a battleground for the nation’s culture wars. One of the biggest groups leading the charge is Moms for Liberty.

‘Me Time’ will do anything for a laugh but isn’t funny, says critic