Obama to Pay a Symbolic Visit to Hiroshima Seventy years ago, the United States struck the Japanese cities of Hiroshima and Nagasaki. There's still dispute over whether that was necessary to end World War II. But the force of those blasts, the property damage and loss of life, were so devastating that no such weapon has ever been used again. Jimmy Carter is the only former President to visit Hiroshima. Later this month, after a summit conference of seven industrialized nations, President Obama will the first to go there while still in the White House. Scott Harold is Associate Director of the Center for Asia-Pacific Policy at the Rand Corporation. 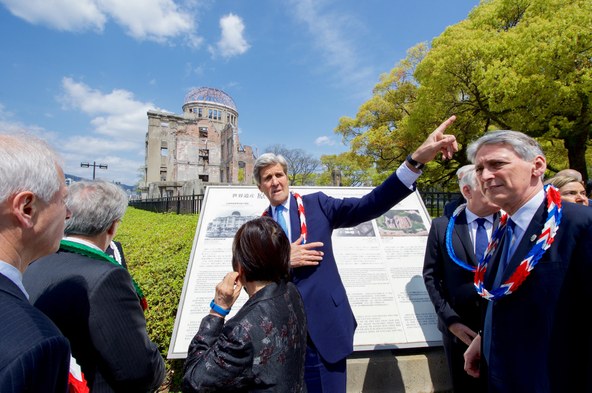 Secretary of State John Kerry stands at the Hiroshima Peace Memorial
as he and his G7 counterparts visit the site on April 10, 2016.
Official State Department Photo

The "Trump of the Philippines" Wins Its Presidency

This week's votes have been counted, and a mayor called "the punisher," who's joked about rape and killing, is now the president-elect of the Philippines. Today, Rodrigo...

Use the Bathroom, Break the Law

The federal government says the state of North Carolina is violating the civil rights of transgender people. A new law requires them to use only those public bathrooms...

Obama to Pay a Symbolic Visit to Hiroshima

Seventy years ago, the United States struck the Japanese cities of Hiroshima and Nagasaki. There's still dispute over whether that was necessary to end World War II. But the...