The State of the Union address to Congress is a tradition that’s come and gone — for better or worse. Much depends on demands of the times. George Washington delivered the first State of the Union address to Congress. Thomas Jefferson sent his in writing. Harry Truman put his audience to sleep. Presidential historian and Pulitzer Prize-winning author Doris Kearns Goodwin traces the history and importance of this American tradition. 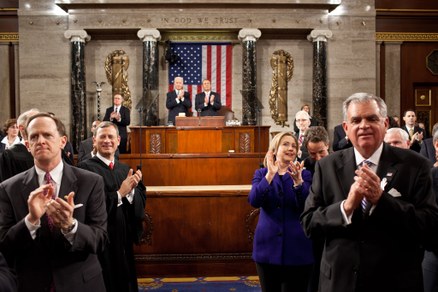 The audience applauds as President Barack Obama enters the House Chamber to deliver his State of the Union address on January 25, 2011.
Official White House Photo by Pete Souza

El Chapo at the Crossroads of Crime and Entertainment

Ten people, most of them German tourists, were killed this morning by a suicide bomber in Istanbul. The attack occurred in the old city near the Blue Mosque and a statue of...

After a shootout that killed five bodyguards, billionaire drug kingpin Joaquín "El Chapo" Guzmán is back in the same Mexican prison he tunneled out of last year. He's...

The State of the Union address to Congress is a tradition that’s come and gone — for better or worse. Much depends on demands of the times. George Washington delivered the...

END_OF_DOCUMENT_TOKEN_TO_BE_REPLACED
KCRW's Drive to the Future: TODAY, you could win an Apple iPhone 12! Your donation to KCRW will also support Kedren Health, a community health center serving South LA, providing COVID vaccines, primary care, and mental health services equitably, regardless of one’s ability to pay.
Give Now
Give Now