Nobody expected it, but the Immigration Act of 1965 quadrupled the number of new arrivals, increasing the population by 59 million people. Before then, the law favored Anglos from Europe. Their share of the population was 84%. Now it's just 62% -- less than half in cities like LA and Houston. On this 50th anniversary, we hear how the law is still changing the face of America — with Asian immigrants now outnumbering Latinos. 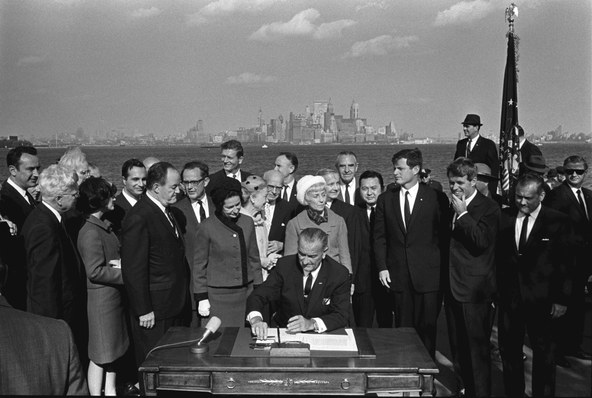 How the Immigration Act Has Changed America

Today Russian war planes carried out a second day of air strikes in Syria. Although Moscow claims to be targeting ISIS, the strikes have hit other rebel groups fighting...

Nobody expected it, but the Immigration Act of 1965 quadrupled the number of new arrivals, increasing the population by 59 million people. Before then, the law favored...

A Street at the Epicenter of the Israeli-Palestinian Conflict

As the Israeli-Palestinian stand-off continues, there's no place that demonstrates the complexity of the issues that a street in Jerusalem called “The Alley of God.” It's...

END_OF_DOCUMENT_TOKEN_TO_BE_REPLACED
KCRW’s Season of Giving Back – donate for essential journalism, music discovery, and arts and culture for all + be automatically entered to win a Private Screening of Guillermo Del Toro’s latest film for up to 40 friends + concessions!
GIVE NOW
Give Now