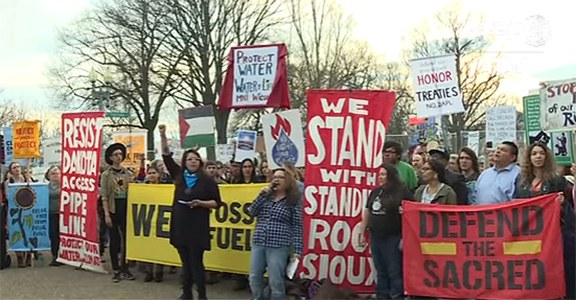 Just two months ago, tribal leaders and many supporters were celebrating a victory when the Army Corps of Engineers ordered an environmental impact report on the Dakota Access Pipeline. Now, the Corps has reversed itself, and construction is under way again for a tunnel under the Missouri River just upstream from the Standing Rock Sioux Reservation. Mark Trahant is a professor at the University of North Dakota and an independent journalist. He updates us on what's happened over the past month and what's likely to happen next.

Sessions takes the helm at the Justice Department

President Trump appeared at the White House today with Japanese Prime Minister Shinzō Abe — a head of state who's getting days of face time with America's new chief executive.

America's new Attorney General understands his "duty to say no" when the President may be flouting the law, but Jeff Sessions may not speak up very often. Top advisor Steve...