There are new revelations about Donald Trump, Jr. and his meeting with a Russian lawyer. Today he released an e-mail chain, including the invitation to a meeting to hear evidence that would "incriminate Hillary" Clinton as part of the Russian government's support for his father. Trump the younger replied within minutes: "If it's what you say, I love it, especially later in the summer." 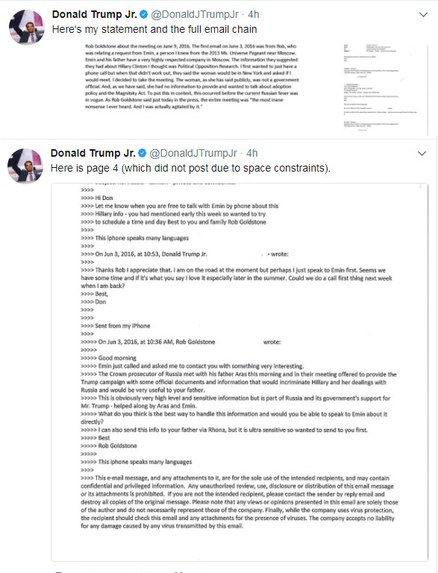 But when asked about Russian interference in the election he told CNN, "They'll say anything in order to win this. I mean this is time and time again, lie after lie. You notice, he won't say 'I say this.' We hear experts. His house cat at home once said that this is what's happening with the Russians. It's disgusting." Rick Wilson, a Republican political strategist and columnist for the Daily Beast, says the tweets indicate it's likely that President Trump knew about the meeting and recognizes now that he made a mistake.

Sinclair, One America and conservative takeover of local news

There are new revelations about Donald Trump, Jr. and his meeting with a Russian lawyer. Today he released an e-mail chain , including the invitation to a meeting to hear...

Despite the growth of cable and the dominance of three broadcast networks, many Americans still get their news from local TV. Now, one company — the Sinclair Broadcast...

Blackwater CEO Erik Prince holds a photograph of the remains of a blown up vehicle in Iraq while testifying before the House Oversight and Government Reform Committee on...