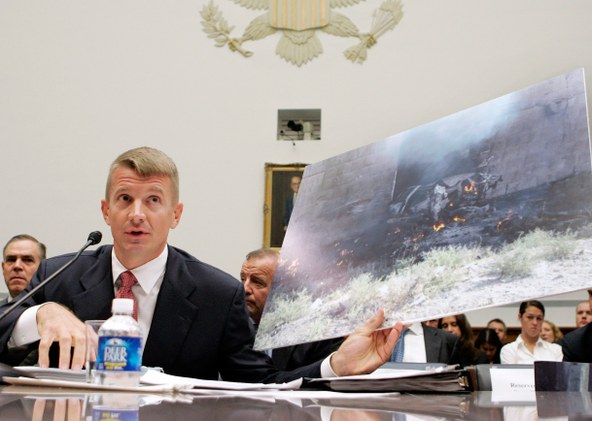 Blackwater CEO Erik Prince holds a photograph of the remains of a blown up vehicle
in Iraq while testifying before the House Oversight and Government Reform Committee
on Blackwell security contracting in Iraq and Afghanistan, October 2, 2007.
Photo by Larry Downing/Reuters

Erik Prince became well known for Blackwater Worldwide, the private security firm that killed 17 civilians in Baghdad during the Iraq War. He's just one of the businessmen recruited by President Trump's advisors to give advice on alternatives to Pentagon plans for operations in Afghanistan. Mark Landler, White House correspondent for the New York Times, discusses the reason and players behind the proposals.

Sinclair, One America and conservative takeover of local news

There are new revelations about Donald Trump, Jr. and his meeting with a Russian lawyer. Today he released an e-mail chain , including the invitation to a meeting to hear...

Despite the growth of cable and the dominance of three broadcast networks, many Americans still get their news from local TV. Now, one company — the Sinclair Broadcast...

Blackwater CEO Erik Prince holds a photograph of the remains of a blown up vehicle in Iraq while testifying before the House Oversight and Government Reform Committee on...