Who's lying? The battle over 'fake news' CNN retracted a story about a Russian investment fund and accepted the resignations of three journalists — including a Pulitzer Prize winner. They relied on a single source which CNN calls a "massive break in protocol." Once again, the president attacked the media in a tweet. 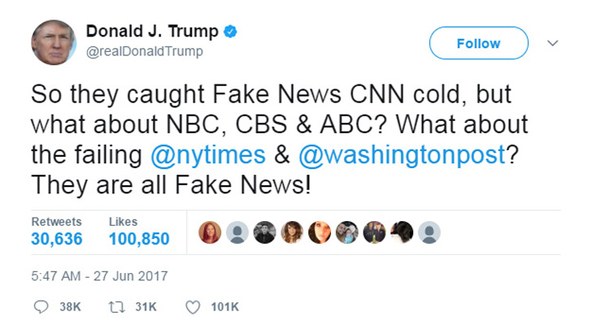 Deputy Press Secretary Sarah Huckabee Sanders told reporters, "We have gone to a place where if the media can't be trusted to report the news that's a dangerous place for America and I think if that's where certain outlets are going particularly to spike ratings and if that's coming from the top that's more scary and I think that's more disgraceful."

Supreme Court ends a quiet term, looks ahead to a blockbuster one

The cyberattack that began yesterday in Ukraine has now reached 64 countries, including the United States. At first, it was thought to be a version of WannaCry, which struck...

The US Supreme Court is back in business

Justice Neil Gorsuch has the US Supreme Court at full strength after more than a year with just eight members: four conservatives and four tending liberal. After avoiding...

Who's lying? The battle over 'fake news'

CNN retracted a story about a Russian investment fund and accepted the resignations of three journalists — including a Pulitzer Prize winner. They relied on a single source...