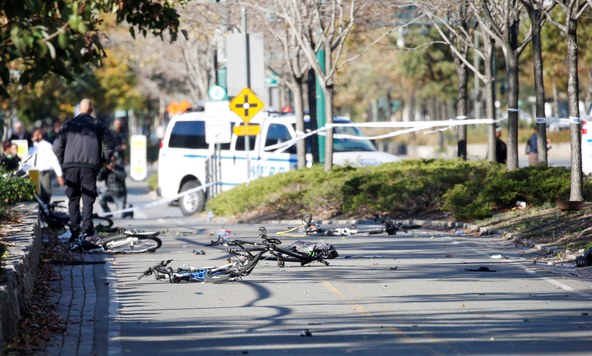 Multiple bikes are crushed along a bike path in
lower Manhattan in New York, October 31, 2017
Photo by Brendan McDermid/Reuters

Eight people — six of them from out of the country -- were killed in yesterday's truck attack on a bike path near the World Trade Center. The attack by 29-year-old Green Card holder Sayfullo Saipov was the first deadly strike of its kind in New York City since September 11. Police say the suspect from Uzbekistan was "radicalized" in this country. President Trump, citing Fox News as his authority, blamed Democrats for yesterday's attack in New York. He tweeted that the killer entered the country under an immigration program supported by Chuck Schumer, the Senate Minority Leader, who represents New York State. Schumer replied by accusing the President of "politicizing and dividing America" at a time of tragedy.

Multiple bikes are crushed along a bike path in lower Manhattan in New York, October 31, 2017 Photo by Brendan McDermid/Reuters Eight people — six of them from out of the...