"Heroism" is another name for "extreme altruism," which social scientists have a hard time explaining. Now, they have a real incident to work with — Friday’s extraordinary behavior of three Americans and a Briton. 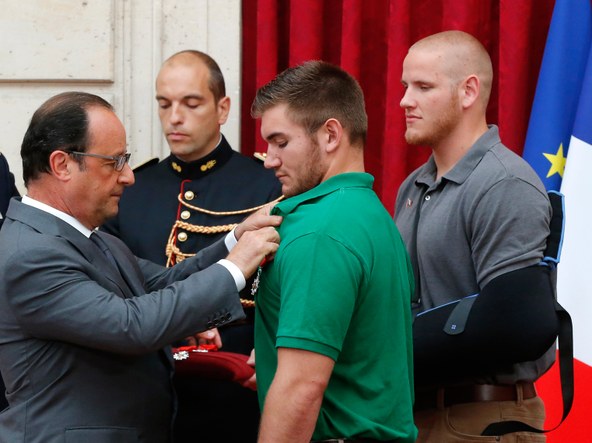 French President François Hollande (L) awards US National Guardsman Alek Skarlatos (C) with the Legion d'Honneur as as US Airman First Class Spencer Stone (R) looks on during a ceremony at the Elysee Palace in Paris, August 24, 2015.
Photo: Michel Euler/Reuters/Pool

The American Cop, One Year after Ferguson

When the New York Stock Exchange opened this morning, the Dow Jones Industrial Average plunged a thousand points before starting to work its way back up.

What's It Like to Be a Cop in America?

There are some 680,000 sworn police officers in the United States. Thanks to a year of cellphone videos spread on social media, "every one of them has had to answer, in one...

"Heroism" is another name for "extreme altruism," which social scientists have a hard time explaining. Now, they have a real incident to work with — Friday’s extraordinary...