The so-called "Arab Spring" never took place in Lebanon, despite growing public outrage at a government divided between Muslims and Christians since the end of the civil war in 1990. Now, there are widespread calls for the "downfall of the regime" with a massive protest called for tomorrow. Lebanon's divided government has not collected trash or garbage since June, and mountains are piling up in the streets of Beirut. That has spurred a protest campaign called, "You Stink," which is based on the failure to provide all kinds of basic services. 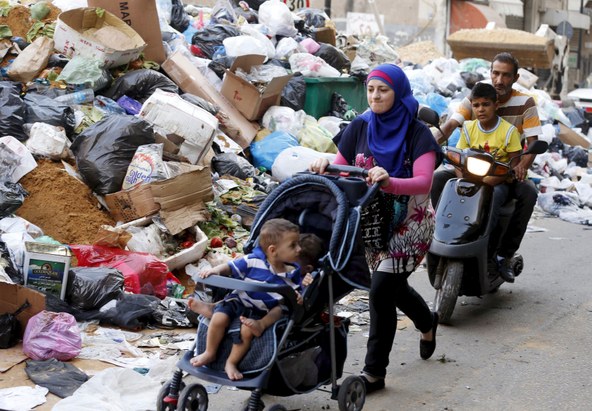 A woman pushes a stroller as other people ride on a scooter past garbage piled up along a street in Beirut, Lebanon.
Public anger that has come to a head over the trash crisis turned violent at the weekend,
with scores of protesters and security forces injured.
(Mohamed Azakir/Reuters)

Is Europe's Response to the Refugee Crisis the Right One?

In the Mediterranean Sea off Libya today, some 200 people died when two boats overturned. Yesterday, in Austria, 71 decomposing bodies, including those of four children,...

Dark Secrets from the Operating Room

Patients need to have trust in their doctors, and doctors cultivate what's called a compassionate "bedside manner." But their behavior in the operating room doesn't always...

The so-called "Arab Spring" never took place in Lebanon, despite growing public outrage at a government divided between Muslims and Christians since the end of the civil war...

END_OF_DOCUMENT_TOKEN_TO_BE_REPLACED
KCRW's Drive to the Future: LAST CHANCE to win an Apple iPhone 12! Donate by midnight tonight to upgrade your phone game and support KCRW music, news, and culture.
Give Now
Give Now