The tech colossus Airbnb spent $9 million to defeat Measure F yesterday in San Francisco's local election. The measure was just one part of a campaign described as being about "the soul of the city." 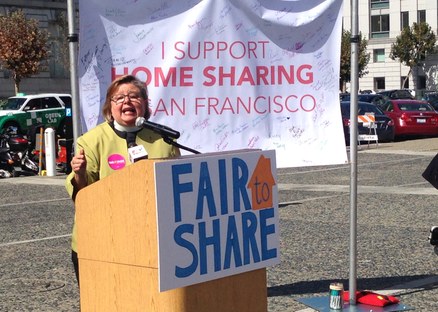 Members of HomeSharersSF, doing a rally at City Hall in San Francisco before the big vote on the Airbnb law
Photo: Kevin Krejci

The tech colossus Airbnb spent $9 million to defeat Measure F yesterday in San Francisco's local election. The measure was just one part of a campaign described as being...

END_OF_DOCUMENT_TOKEN_TO_BE_REPLACED
KCRW's Drive to the Future: TODAY, you could win an Apple iPhone 12! Your donation to KCRW will also support Kedren Health, a community health center serving South LA, providing COVID vaccines, primary care, and mental health services equitably, regardless of one’s ability to pay.
Give Now
Give Now