Instead of a wall of alcohol bottles, the bar In Sheep’s Clothing proudly shows off its vinyl collection. Photo credit: Jersey Walz.

The average American spends around three and a half hours on their phone. We use it at home, at the gym, in restaurants, while walking. Everywhere in public and private spaces, people are glued to their cellphones.

Reporter Adriana Cargill describes herself as millennial who also remembers “a time growing up when no one had phones, and I miss that time.” Turns out, she is not the only one. A small group of bar and private club owners in Los Angeles are trying to get their patrons to unplug from technology, even if it’s just for the length of a drink.

Cargill takes DnA on a tour of three under-the-radar bars: Reserve Vault City Club in an undisclosed location in DTLA, Old Lightning in Venice, and In Sheep’s Clothing in LA’s Arts District. She finds that once she’s overcome the panic of not having her phone, it is “liberating."

A couple of years ago, I joined a private club in downtown Los Angeles called RVCC, which stands for Reserve Vault City Club. It started as a secret speakeasy inside an underground bank vault built in 1929. It was a strictly word-of-mouth place, so to get there, you had to know someone who could tell you how to find it. You entered the building and waited in an apartment lobby. Then someone, or possibly a series of clues, would lead you down a hallway, and then you’d descend a metal stairwell lit by fluorescent light. After walking through a maze of chicken wire storage spaces, you’d at last arrive at the Vault.

“As you would go down to the space [where] no cell phone reception existed, and you were told to put your phones away… People were scared of that ... because it was the unknown," says RVCC founder Chris Adams. 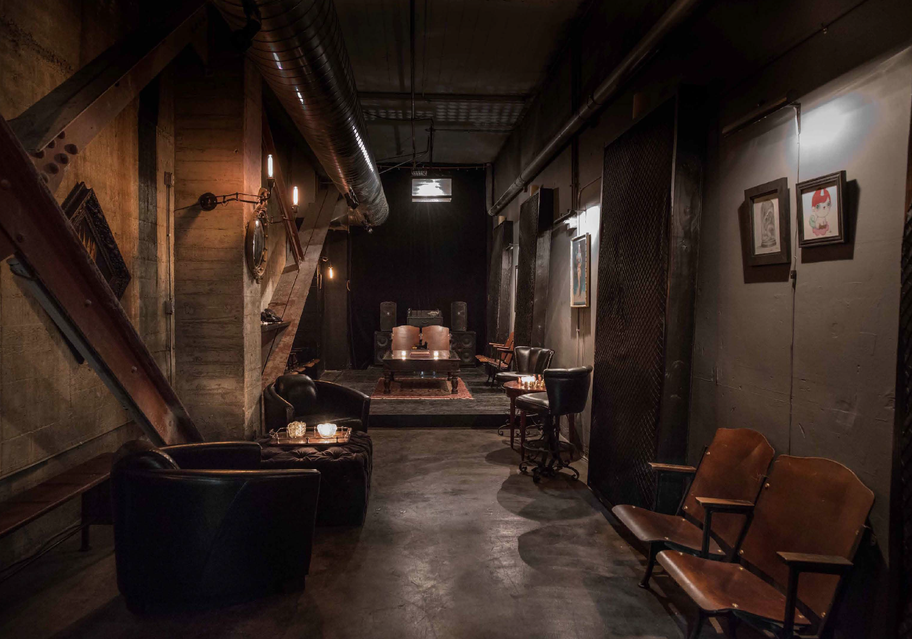 Inside the RVCC speakeasy. built inside a bank vault from 1929. Photo credit: Rob Stark.

He opened RVCC in 2012 as a place for the community of downtown to come together. Eventually, he moved it above ground and into a new space and formalized it into a legal private club. But he kept the same policies that made the original space a tech-free sanctuary. He wanted members to be able to take a break from being documented and documenting. So the club has a no-photos and no-social media policy. RVCC has around 250 members and still has no website or social media presence. During the day, it’s a workspace where you can use all the tech you want, but it’s meant to be experienced, not tweeted about.

“I think that the nice thing about RVCC is that the reason it's saying no phones is ... because they genuinely want people to not be on their phones,” says longtime member Isaac Simpson. 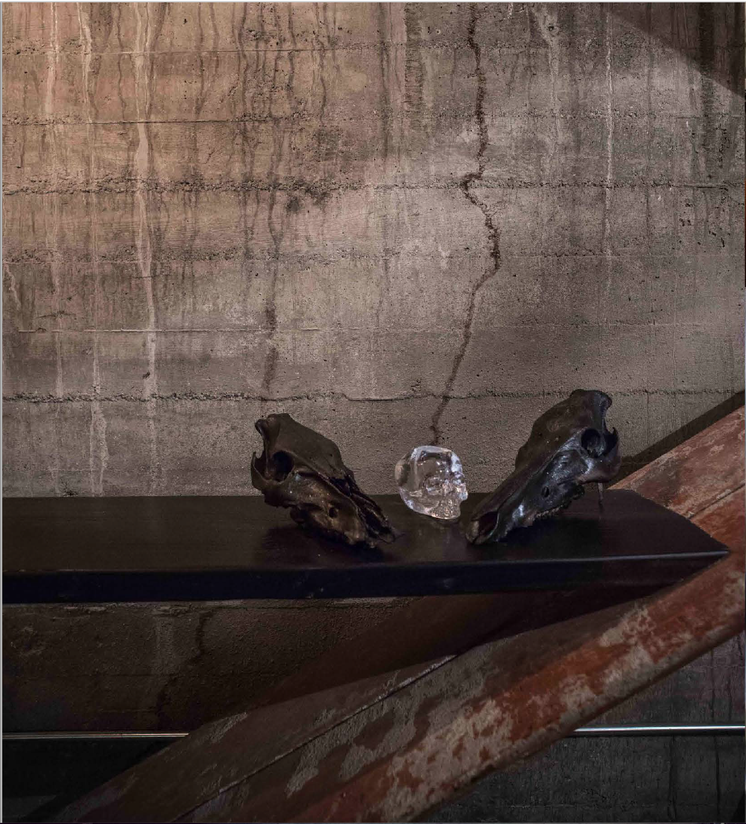 The old bank vault’s decay was incorporated into the design of the speakeasy. Photo credit: Rob Stark.

I joined this club because I thought it might attract people who shared the same values as me, namely people who wanted to explore and experience things instead of just reading about them on Yelp or Google. I wanted to meet people who didn’t just move through life blindly accepting their phones as new permanent body appendages, but actually consciously decided what their relationship with technology would be. And I was right, I found a lot of people like that at RVCC.

I wanted to find more spaces that challenged patrons to think about the relationship with technology, so Chris Adams suggested I check out a secret speakeasy bar called Old Lightning in Venice. It’s inside the restaurant Scopa Italian Roots. 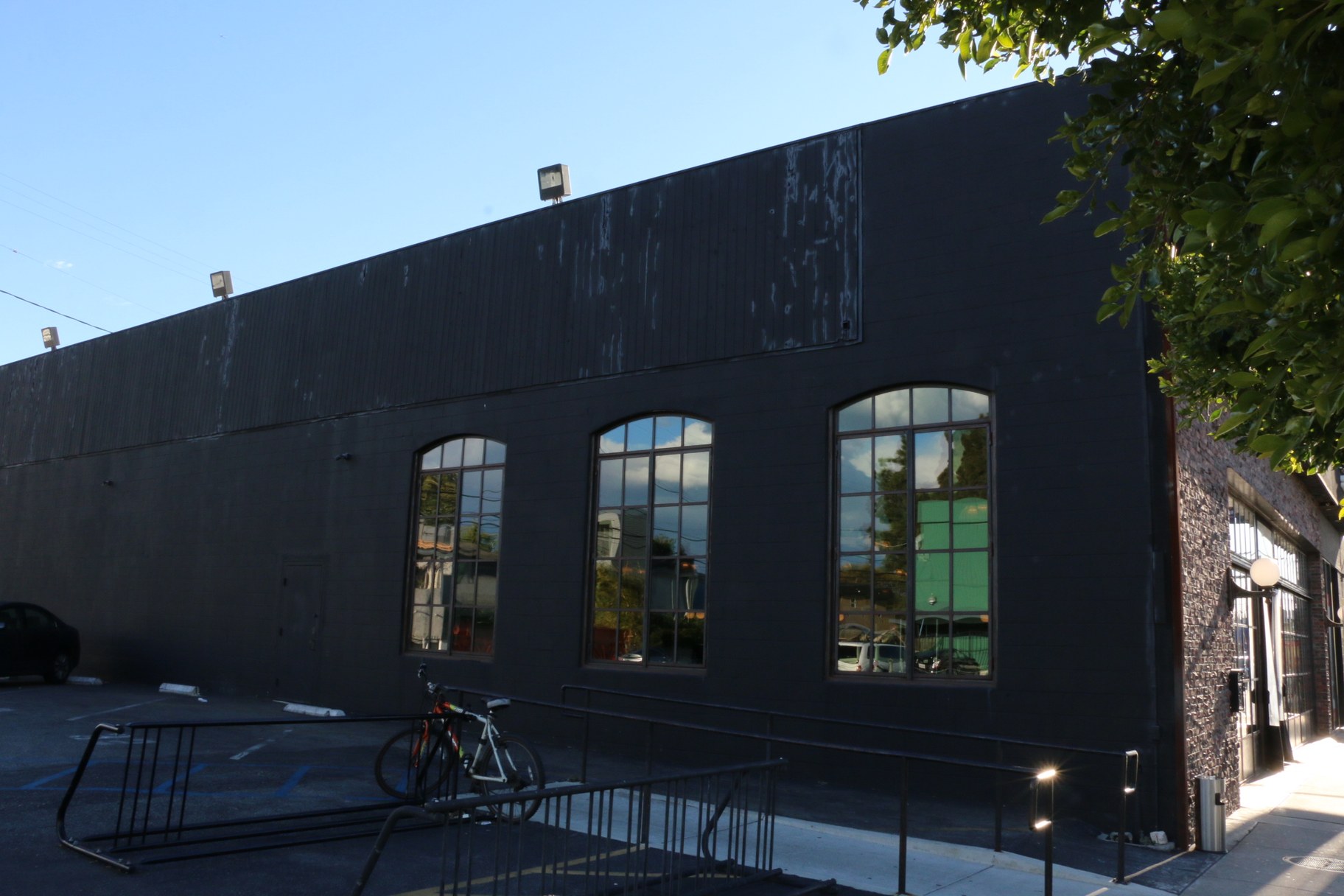 Can you spot the entrance to Old Lightning? Photo by Adriana Cargill.

The restaurant is dark and cozy and smells like tomatoes and garlic bread. To get into Old Lightning, you go to the host podium in the restaurant and tell them you have a reservation at Old Lightning. Then an attractive Frenchman in a suit comes and leads you back outside to a black wall next to the parking lot. The price of entry? You have to give up your phone. Once you hand it over, he opens a door in the wall you likely didn’t notice before.

Whatever image of a dark, dimly lit, New York Prohibition-style speakeasy you might have, throw it out. This place is the exact opposite. The inside is colorful and decorated like a cozy mid-century modern living room. The attention to detail is remarkable. Every piece of furniture, glass and napkin has been carefully considered and curated to transport you to a different era. The liquor advertisements from the 1960s that line the walls of the bar are actually available at the bar to drink. You can taste the exact same liquor that people did back then. As I look around, no one is on their cell phone, and it really feels like I’ve stepped back in time.

Co-owner Stephen Livigni explains why he doesn’t allow cellphones in the bar: “I think just not having that distraction, not having that light in your eye, not just wondering when bad news is going to hit your phone, you can really engage with other people, the drinks taste better, the music sounds better."

When Livigni opened Old Lightning in 2016, he sent 250 friends an email blast. That was it for marketing. In those early few months, a lot of people who came to the bar didn’t know they were going to have their phone taken at the door. Some people found it cathartic. Others, like parents of infants or on-call doctors, found it stress inducing. Phones are kept in a cupboard in the bar, so if people really need to check them, they can under the supervision of staff.

However, “Nine out of 10 times, the people that are the worst about handing [their cellphone] over, when we give it back to them at the end of the night, they say 'Wow, thanks so much for pulling me away from that thing, and I'm sorry that I came at you at the beginning, but that was really great to not have it, so keep doing that,’” says Livigni.

For many patrons, the no-phone policy has become the reason to go to Old Lightning. Every time I go there, inevitably, I reach for my phone to google something or to take a picture, and I panic for a second when I realize it’s not there. But in a weird way, I like that feeling of panic because it forces me to question my relationship with my phone. It reminds me how dependent I am on my device, but also how liberating and calming it is to be without it. 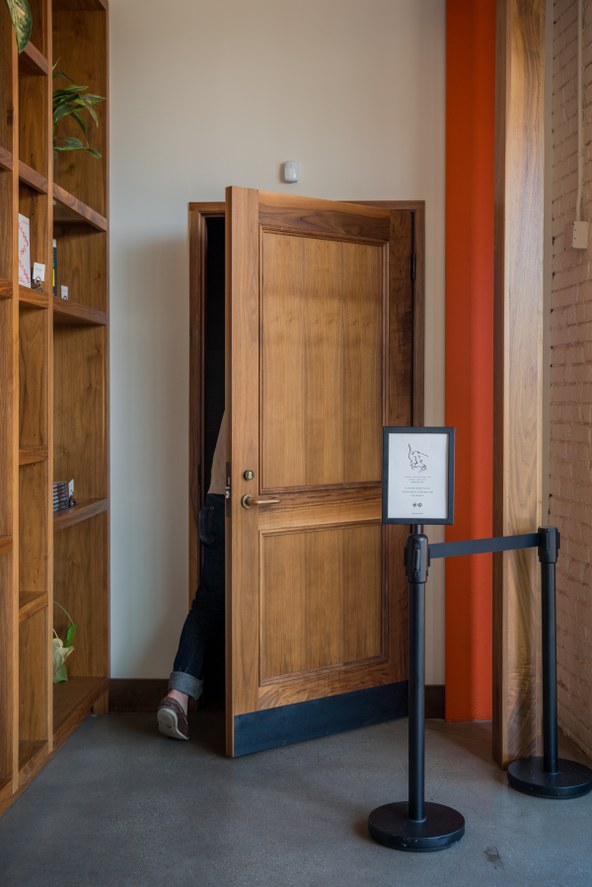 There’s another speakeasy with a no-phone policy in downtown LA’s Arts District that I’ve been wanting to check out. Inside Pizza Lupetti, there’s a plain unmarked wooden door. Outside the door, there’s a little white sign that says, “Please keep your conversations below the music.” Under that, there's an image indicating that phones and cameras are not permitted. This is the entrance to In Sheep’s Clothing. 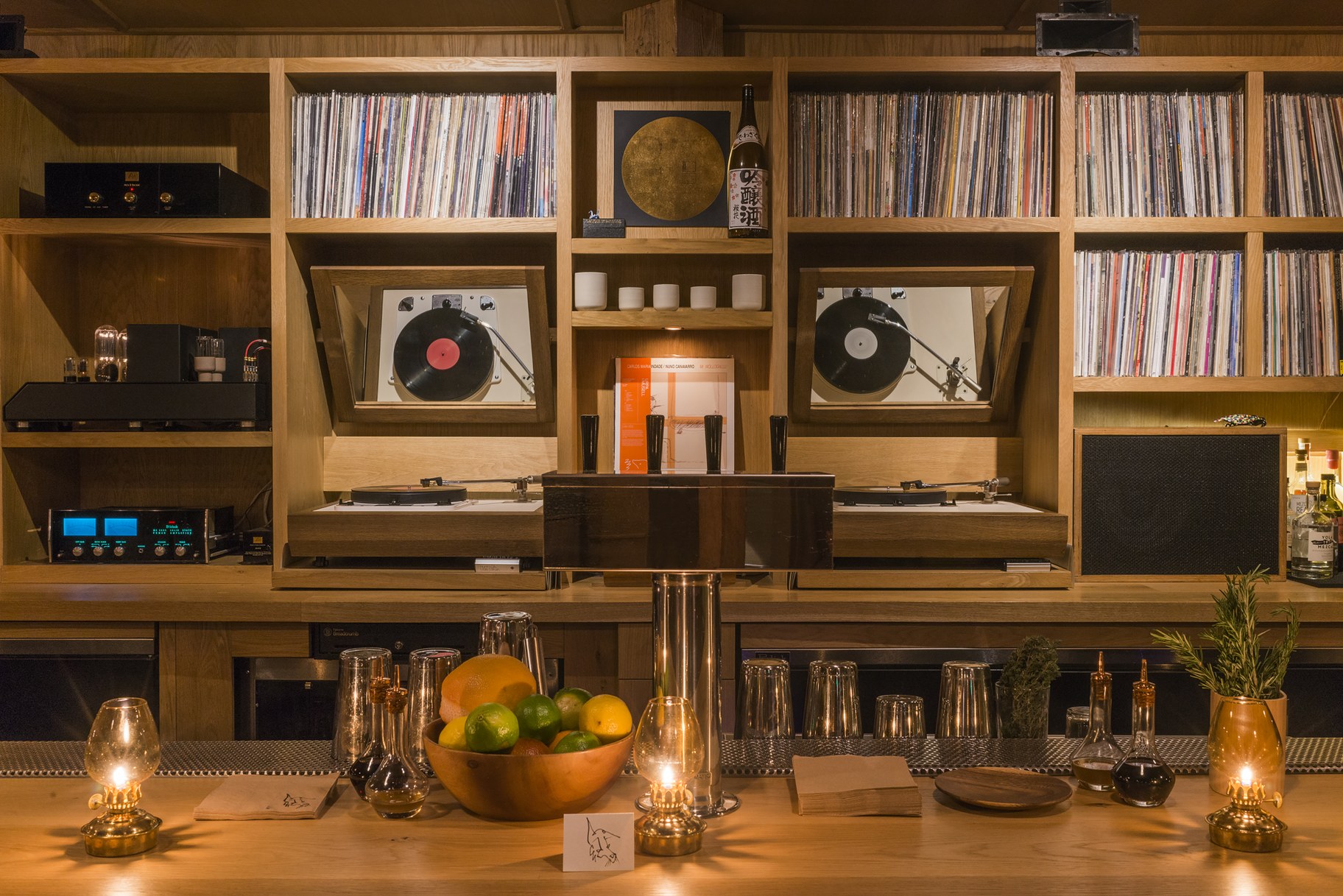 Instead of a wall of alcohol bottles, the bar In Sheep’s Clothing proudly shows off its vinyl collection. Photo credit: Jersey Walz.

I notice right away that the floor is made of cork, and there’s lots of curved surfaces and wooden beams to absorb sound. Behind the bar, instead the usual booze bottles, they are shelves filled with hundreds of vinyl records. The focus here is the music, without question. It’s a hifi listening bar, so the music isn’t played from a Spotify or iTunes playlist. The music comes from vinyl records played through giant analog speakers from 1973. In other words, there’s no digital noise. 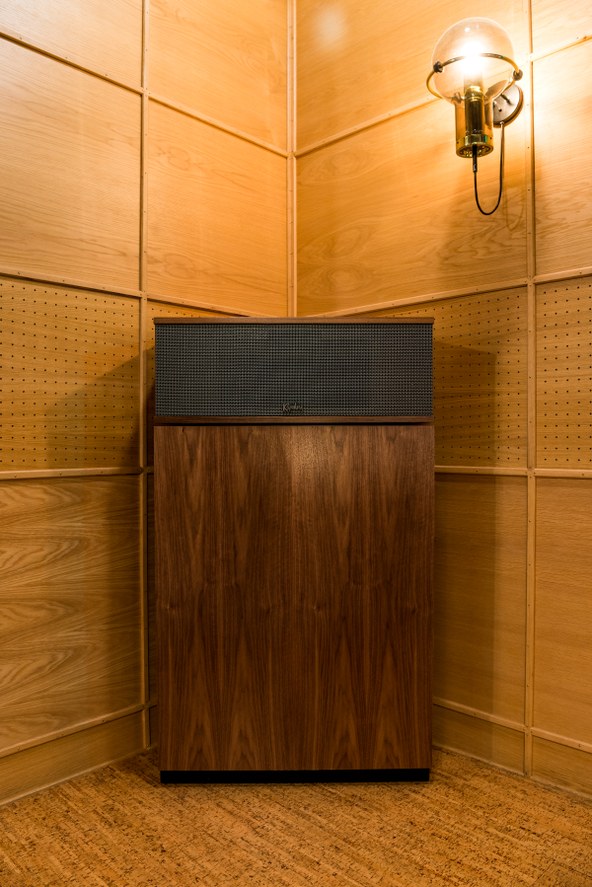 The music at In Sheep’s Clothing plays out of state-of-the-art Klipschorn floorstanding speakers from 1973. Photo credit: Jersey Walz.

The quality of music in here is unlike any bar I’ve ever been to. A good comparison between normal bars and here would be like seeing the LA Philharmonic perform live at Walt Disney Concert Hall versus listening to that same concert on the radio in your car. In here, the sound is thick, juicy and all-enveloping.

“We want people to take a break from this highly digital existence that we’re all kind of navigating through … and have a respite where you can have an analog experience that's almost meditative,” says owner Bryan Ling.

Ling is a big-name music manager who runs New Community Management in partnership with Jay Z’s ROC Nation. He and his consultant on In Sheep’s Clothing, Zach Cowie, who’s also a well-known music supervisor, traveled to Japan to visit its jazz listening bars (kissa) for inspiration.

“In Japan, they’ll just go to these places by themselves, almost it’s like a church or like a sanctuary or something,” says Ling. 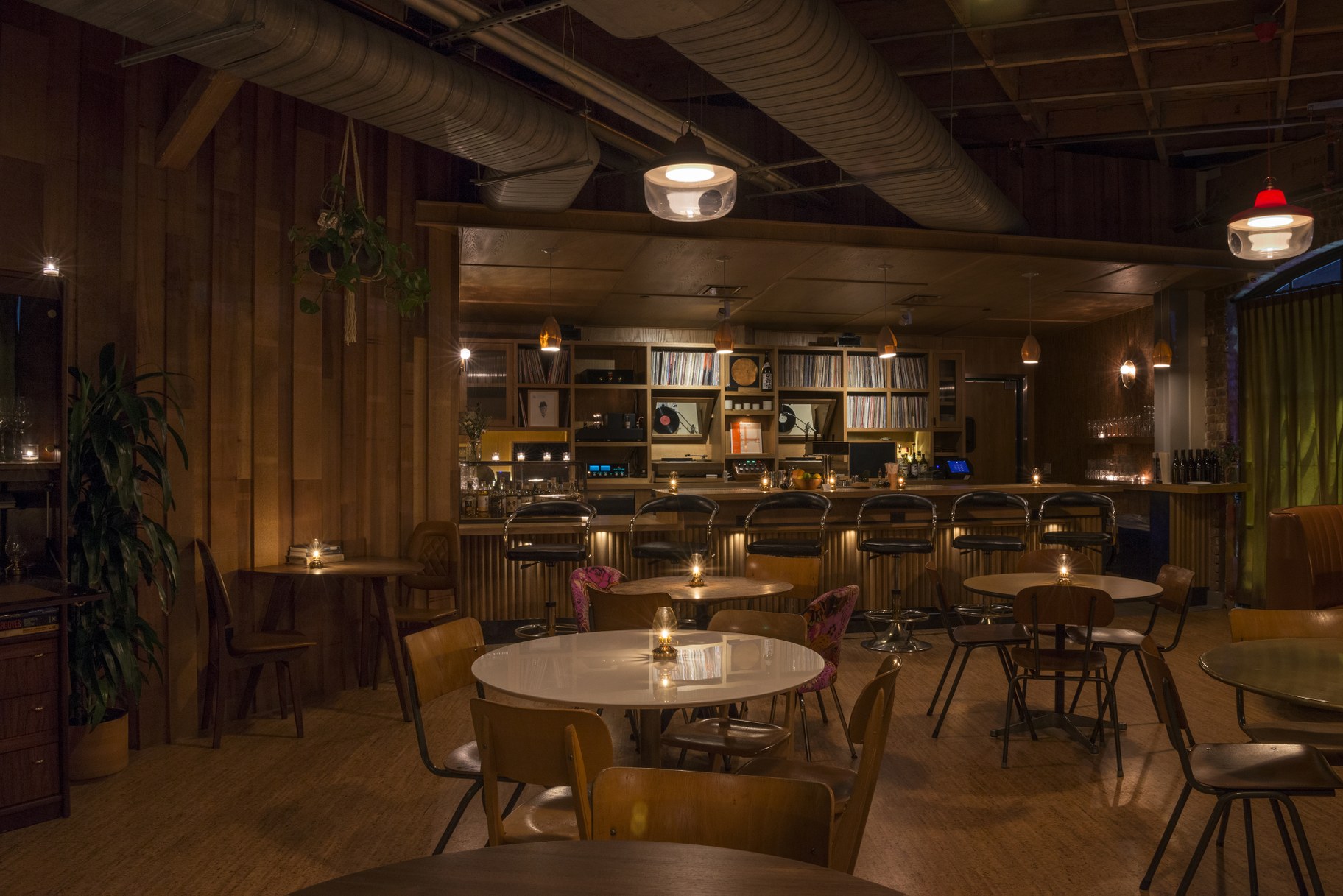 Ling has tried to mimic that same atmosphere at In Sheep’s Clothing. At each table, there is a sign reminding patrons “To Hear More, Say Less” -- the bar’s motto. As I look around the room, I did see people sitting by themselves or in pairs, quietly just listening.

The tech policy here is not as draconian as Old Lightning. People work on laptops and text during the day. But in the evening, they reset the room, and patrons are asked to not talk over the music and not use their phones to take photos or use social media.

“This isn’t a space for social media, it doesn't really do it justice. And also, anyone who knows me knows that I like to create safe environments for people to be hanging out without the fear of being a part of someone's Instagram story," says Ling.

Before opening In Sheep’s Clothing, Ling created No Name, a restaurant and cocktail bar on Fairfax. It’s a celebrity and industry people-only type of place with a similar no-phone and no-photos policy. It’s no surprise that famous people want to be off the grid. But what Ling and the other owners of cellphone-free spaces are tapping into is that regular people are also starting to want them too.

Each of these three venues offer patrons highly curated experiences in exchange for giving up their devices. They challenge people to rethink their relationship with technology by reminding them what it feels like to be without it. To me, it’s comforting that spaces still exist where people don’t have their heads buried in their phones. Places were unplugged patrons can engage fully with where they are. It’s a good reminder that sharing an experience on Instagram isn’t nearly as meaningful as sharing it in person, with your phone off.