The redevelopment of Ports O' Call Village has been decades in the making. The village opened in 1963 with cobblestone streets, souvenir and gift shops and seafood restaurants. Now there are plans to change the New England-style seaside village into the modern steel and glass San Pedro Public Market.

In 2013, the Los Angeles Board of Harbor Commissioners called for the redevelopment of the waterfront site, and in 2016 the board approved a 50-year lease for an expansion of the village in the style of San Francisco's Fisherman's Wharf. 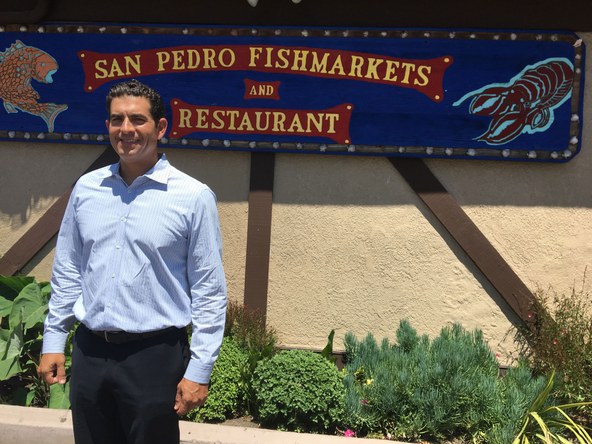 Mike Galvin is the Director of Waterfront and Commercial Real Estate at the
Port of Los Angeles. "Part of the [Port of LA's] mission there is to make the
waterfront accessible to the public and we view through this development we
will really do that on a very large scale by creating this half a mile
promenade down the main channel of the Port of Los Angeles," Galvin said.
Photo by Avishay Artsy

The plans for Public Market include 150,000 square feet of restaurants and shopping, as well as office space, a 30-foot-wide waterfront promenade, a playground, 16 acres of park space, and an open-air 500-seat amphitheater for live entertainment. It's expected to open in 2020.

The developer is LA Waterfront Alliance, which includes The Ratkovich Company and the San Pedro-based Jerico Development. The landscape architect is James Corner Field Operations. 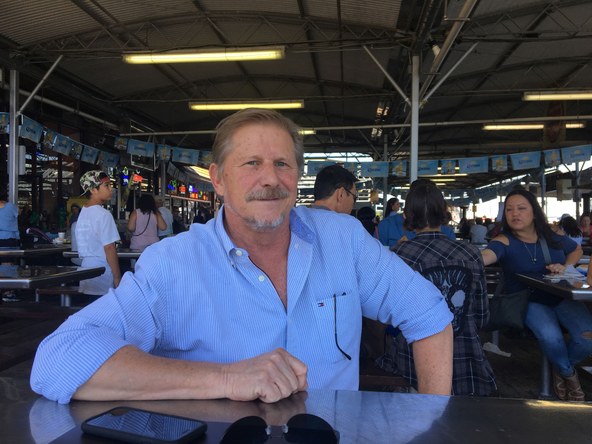 Eric Johnson, principal of Jerico Development. "A New England fishing village
never made sense to me. We have our own maritime culture. So we're trying
essentially to celebrate California for what it is," Johnson said.
Photo by Avishay Artsy

The 15 shop owners claim they haven't been given enough notice to vacate, and that the developers and the Port of LA reneged on offers to provide temporary locations during the construction phase. They've been asked to move out by early October. Demolition is set to start late this year or early next year.

Public reaction to the planned redevelopment is mixed. Some residents think the village is seedy and rundown, and needs an overhaul. There's a skeptical, "I'll believe it when I see it" attitude from some residents, since this renovation has been talked about for 20 years. There's a sense of nostalgia from people who grew up coming here or worked there during the summers. There's concern that the family-owned businesses that have been around for decades will be replaced by chain retail businesses, which will kill the local flavor and the eclectic charm. There are also concerns that the Public Market won't be for them. The San Pedro Fish Market draws working-class immigrant families who may not like the spruced-up new port. 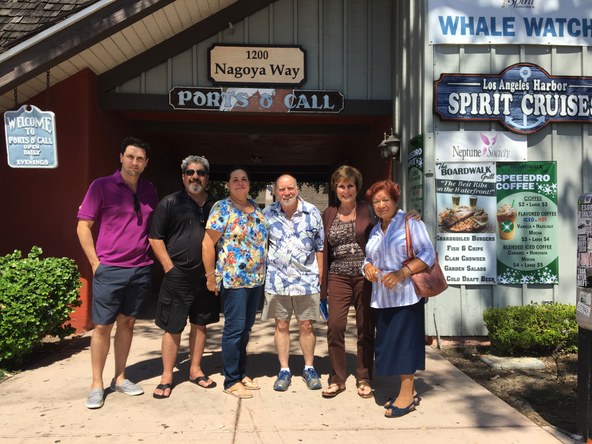 Some of the shopkeepers at Ports O' Call Village who want to be able to stay
in the new San Pedro Public Market. "I started here in 1963. I have over 50 years
in this place and I will be willing to come back if they give me a chance, no matter
what the rent will be. This is like my second home. My roots here are very deep,"
said Virginia Pavkovich, owner of Mexilatin Gifts
Photo by Avishay Artsy.

But officials say this is a long overdue development that will create jobs and reduce crime. This is all part of a $1.2 billion master plan to turn the port into a coastal destination, which includes the recent openings of the Battleship USS Iowa Museum; Crafted at the Port of LA, an arts marketplace; and Brouwerij West, a craft brewery and tasting room.