Ladies and gents, start your tortilla presses — the Great Tortilla Tournament of Champions is here! Photo by Gustavo Arellano.

This time last year, Southern California was gingerly trying to return to normal in the face of COVID-19. One of the few sureties we all held?

And so we continued with our annual KCRW and Gustavo’s Great Tortilla Tournament by holding a Zoom finale that was contactless but no less thrilling or delicious. You’ll recall: Tex-Mex flour tortilla lionesses HomeState beat reigning champion Taco Maria to earn its first Golden Tortilla.

This year? Southern California is gingerly trying to return to normal in the face of COVID-19. And one of the few sureties we hold?

Behold our fourth annual KCRW and Gustavo’s Great #TortillaTournament, in which we match up 64 tortillas — 32 corn, 32 flour — in a weekly sports-style seeded bracket to determine who will win the coveted Golden Tortilla.

This year, we’ve got a righteous twist.

Usually, we invite the top 16 finishers from the previous year — known as the Suave 16 — alongside 48 newcomers to duke it out for the title of best corn and flour, then match them up at the end.

But in the wake of one of the most trying couple of years on record for the restaurant industry, we felt the 2021 edition should be a Tournament of Champions, a roster where every contestant is already a winner. 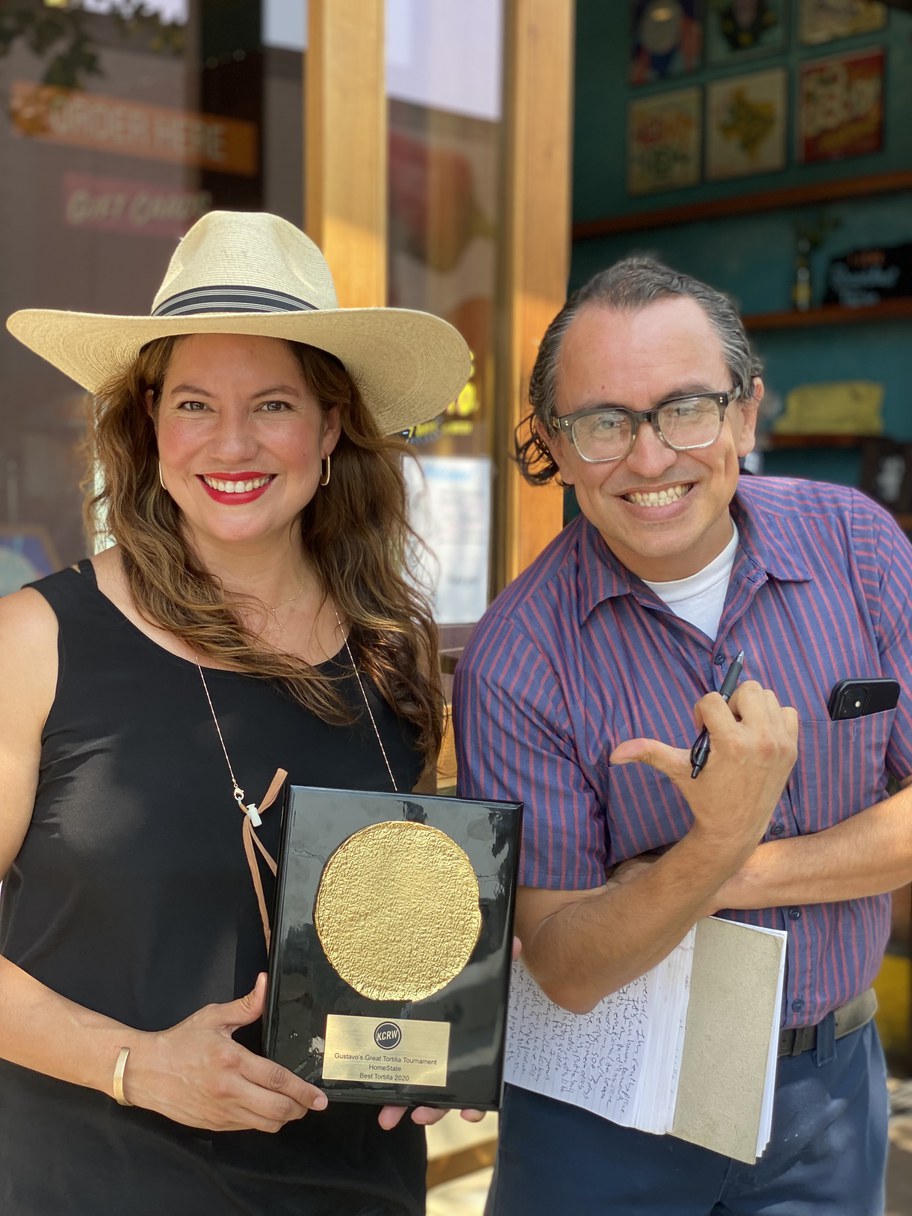 Each of this year’s participants has previously won at least one matchup in our Tortilla Tournament. That means you’ll have perennial heavyweights — Burritos La Palma and Sonoratown in flour, Kernel of Truth and Guisados in corn — competing against historical stalwarts who are ready for revenge. With the strongest roster in Tortilla Tournament history, upsets are not only possible — they’re likely!

Over the next month, check out kcrw.com/tortilla for the progression of our bracket, original essays and reports, a full tortilla directory, and more. You can also explore all 64 contestants, along with a map, and their information and brief bios.

Join us in person

It all leads up to the final tortilla tête-à-tête, going down in person Oct. 10  at the weekly get-together of great food that is Smorgasburg Los Angeles. Think of it as a festival within a festival: DJ sets from KCRW’s Raul Campos and Jose Galvan, an “Ask a Tortilla Expert” booth, and, of course, our Fuerte Four finalists serving up tortillas for my fellow judges and me. The esteemed panel includes KCRW’s Evan Kleiman and Connie Alvarez, Eater LA writer and KCRW contributor Mona Holmes, and a special to-be-announced guest judge.

As always, our Tortilla Tournament of Champions finale will be free to the public. But we’re making one big change: no free samples (sorry). We don’t want to put even more of a financial burden on our Fuerte Four finalists during these COVID-19 times. But we have invited them to offer their delicious tortillas for sale, so everyone can taste their pride and joy. Don’t be cheap, and buy up!

The method to our Tortilla Tournament madness will be familiar to anyone who follows the NCAA’s March Madness or the FIFA World Cup: We’ll start with 32 corn, 32 flour, split into four brackets of 16. Within those brackets, every tortilla is assigned a seed, so that the highest-ranked tortillas are up against the lowest-ranked ones in the early rounds. That makes it easier for the best of the best to advance toward the finals, but also allows for upsets.

For this Tournament of Champions, we assigned seeds based on their lifetime record in the Tortilla Tournament — the more wins a participant had, the higher they were seeded. For example, Taco Maria and HomeState are the top seeds in corn and flour, with records of 14-2 and 13-2, respectively. Meanwhile, the No. 16 seeds in corn and flour, La Venadita and Fonda Moderna, boast one win and one loss apiece. For tortillas with the same historical record, we’ve assigned rankings and brackets for them based on taste, historicity, and potential.

Evan and Mona helm the flour category; Gustavo and Connie claim corn. For the first two rounds, we’ll buy the tortillas fresh, then freeze them that day to see how they hold up after defrosting (Pro tip: dust off all the ice when you take them out of the freezer, toss out the top and bottom tortillas once they’re ready to eat, and get a towel to sop up any additional moisture). After we’ve locked in the Suave 16, we’ll buy new packs of the advancing tortillas and eat them fresh through the Eso Eight.

One group still excluded from the competition: home cooks. We want people to be able to easily buy the tortillas in the tournament, and I don’t think your mom, abuelita, tio, or cousin wants hundreds of strangers to just swing by their house next Sunday and ask for a dozen, you know?

While we tried to gather all previous winners for our Tournament of Champions, there are some notable omissions. One of last year’s Fuerte Four finalists in corn, El Ruso, doesn’t make corn regularly because there’s not enough of a demand due to their Sonoran-style flour tortillas being so delicious. Tehachapi Heritage Grain Project, which did the nearly impossible task of placing both its corn and flour tortillas in last year’s Suave 16, did not have its harvest ready for each tortilla crop and thus had to decline participation. Sabor a Mexico from Panorama City make amazing corn tortillas, but are skipping out this year because (per our tortilla scout) the tortillera who makes them refuses to return to work due to COVID-19 concerns. And, last but not least, every time we tried to go to La Tapatia #5 in Oxnard for their delectable corn tortillas, it was closed.

Your favorite tortilla didn’t make it this year? There’s always next year. And if you have a problem with the seeding or the entries, hit me up, and only me — my name is in the tourno, after all.

And now: Enjoy and start eating! And don't forget to use #TortillaTournament in your photos and posts.