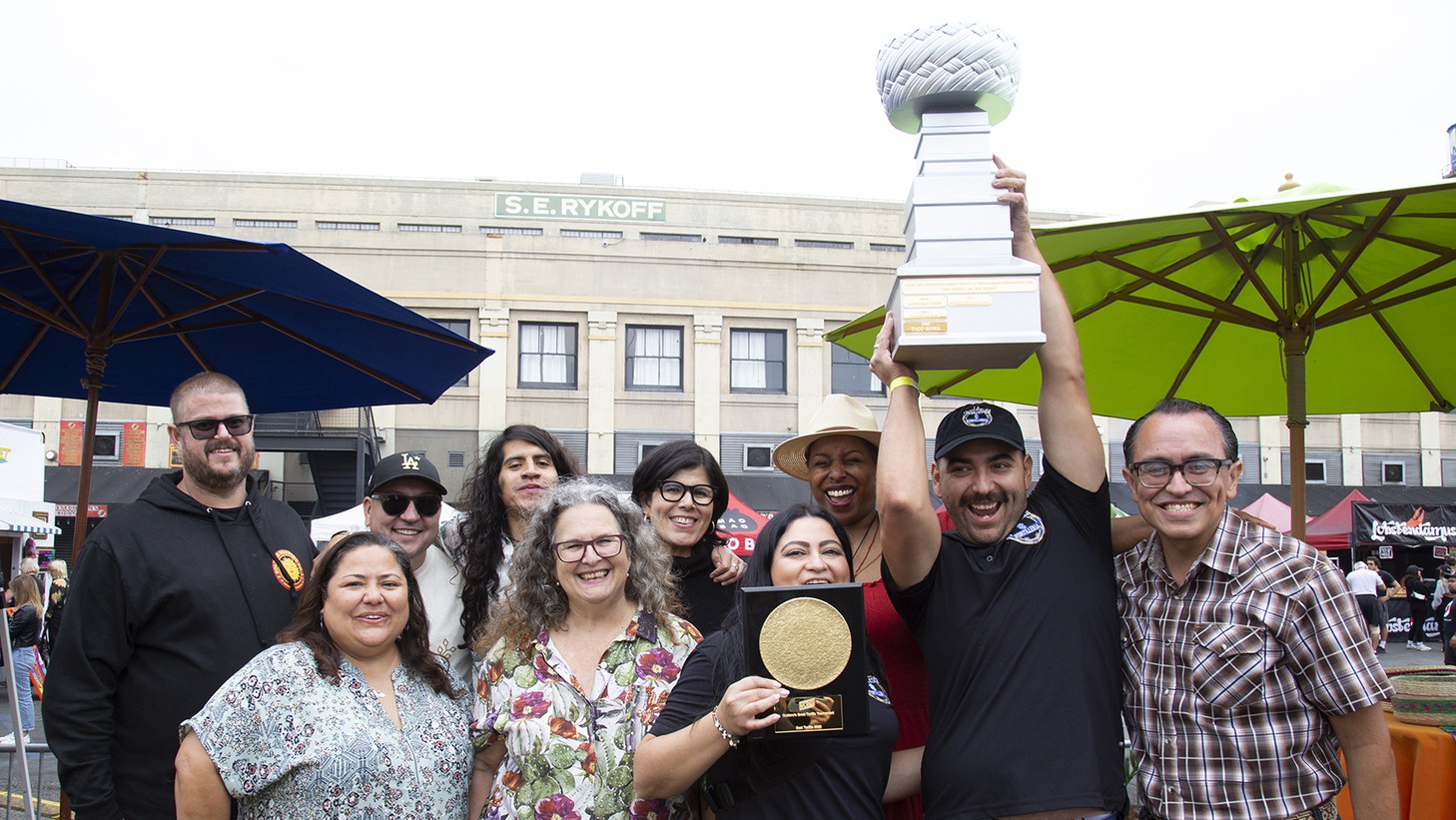 Every year, as myself and my fellow judges in KCRW and Gustavo’s Great Tortilla Tournament are about to announce the winner of the Golden Tortilla, Good Food host Evan Kleiman sighs the same lament on stage.

The other judges always agree. And then I say the same saying, paraphrasing the cult film “Highlander:”

There can be only one.

And thus, we go on to crown the Golden Tortilla.

We had the exact same exchange this year — the hardest yet.

In the corn category, we had Tallula’s of Santa Monica with its extraordinary blue corn tortillas, and La Princesita of East Los Angeles, which is celebrating its 50th year in 2022 of making great, mass-produced yellow corn tortillas. On the flour side, the finalists were previous Golden Tortilla winners, Tex-Mex queens HomeState and Sonora sensations Sonoratown.

All of them were extraordinary tortillas who beat other great tortillas along the way. Tallula’s marked its second year in the Fuerte Four. La Princesita was celebrating its entry as the first old-school, mass-produced tortilleria to make it into the Fuerte Four. Sonoratown and HomeState are making better tortillas than ever before.

But there could be only one winner.

So we all met at Smorgasburg Los Angeles at the Row DTLA for our #TortillaTournament finale. We brought back tortilla art maestro Joe Bravo, who taught children and adults alike how to paint on tortillas. Mariachi Azteka roamed the premises — although just a five-man outfit, they played like an ensemble twice their size. Mexico City-based DJ Junf and our own Raul Campos played great rolas as part of KCRW’s Global Beat initiative.

Off to the side, people took photos with the Chiquihuite Cup, even though no one really knew what it was…yet.

KCRW members got their free tortilla samples from all the finalists; others bought tortillas and other food. Raul Campos’ mom and Suicidal Tendencies founding basist Louiche Mayorga gave advice from our ¡Ask a Tortilla Expert! Booth.

After a week that will live in infamy in the annals of Los Angeles — an embarrassing scandal at L.A. City Hall, an embarrassing flameout by the Los Angeles Dodgers to the San Diego Padres in the baseball playoffs — the city was looking for something to bring us together. 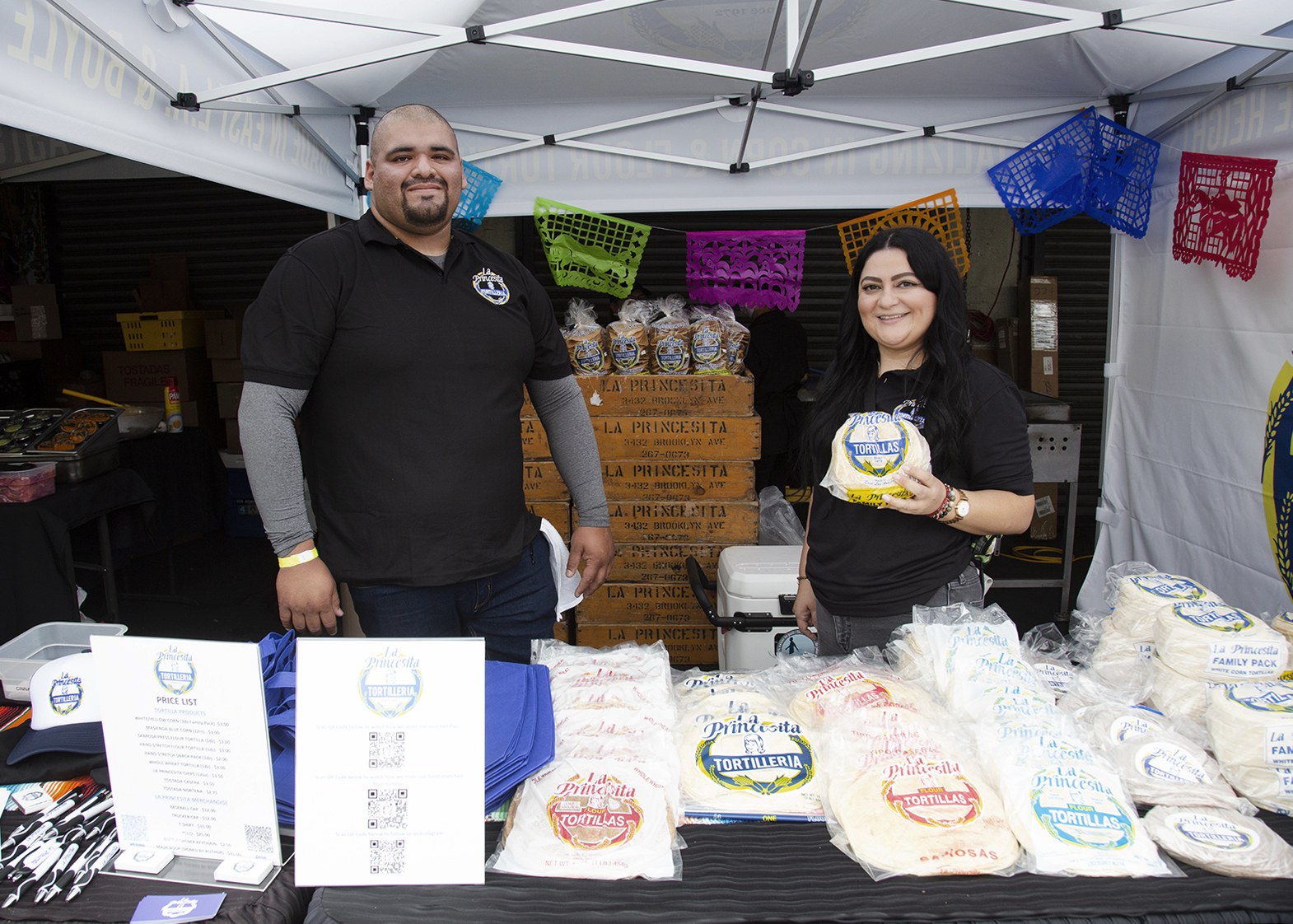 The judges came to the consensus that La Princesita had scored the upset. Photo by Larry Hirshowitz.

The judges: Myself, Evan, KCRW communications chingona Connie Alvarez, and Eater LA writer and KCRW contributor Mona Holmes. Our guest judge: Macarthur genius winner Natalia Molina, author of the delightful A Place at the Nayarit, a sociocultural history of her grandmother’s legendary Echo Park restaurant. Others will have to tell me what we all said about what we look for in a corn and flour tortilla, because I was so in the zone of thinking tortilla thoughts, I brushed off my compa and Profe Natalia’s fellow USC Macarthur genius winner, Josh Kun, when he came up to greet me.

First up was corn, and after a coin toss, we went with Tallula’s first, then La Princesita. Tallula’s was the early favorite — blue corn tends to taste better than other maize, and Tallula’s hand-made their tortillas, while La Princesita whipped theirs out from one of the many packets they were selling. Tallula’s didn’t disappoint at all: soft, chewy, and was that a bit of clove in the masa? A truly extraordinary tortilla.

But then it was La Princesita’s turn.

Connie mentioned she had a Ratatouille moment just smelling the corn tortilla. I told the audience and my fellow judges that, while I think flour tortillas have a better overall flavor than corn, that corn is unbeatable if it hits the perfect nexus of its three core ingredients: corn, water, and lime. If it does that, I argued, it will open up a metaphysical portal for all Mexicans that connects them with thousands of years of heritage, like a wormhole or when in the underrated Disney TV show That’s So Raven, the titular character would zone out and see the future — except for me, it goes in the past. 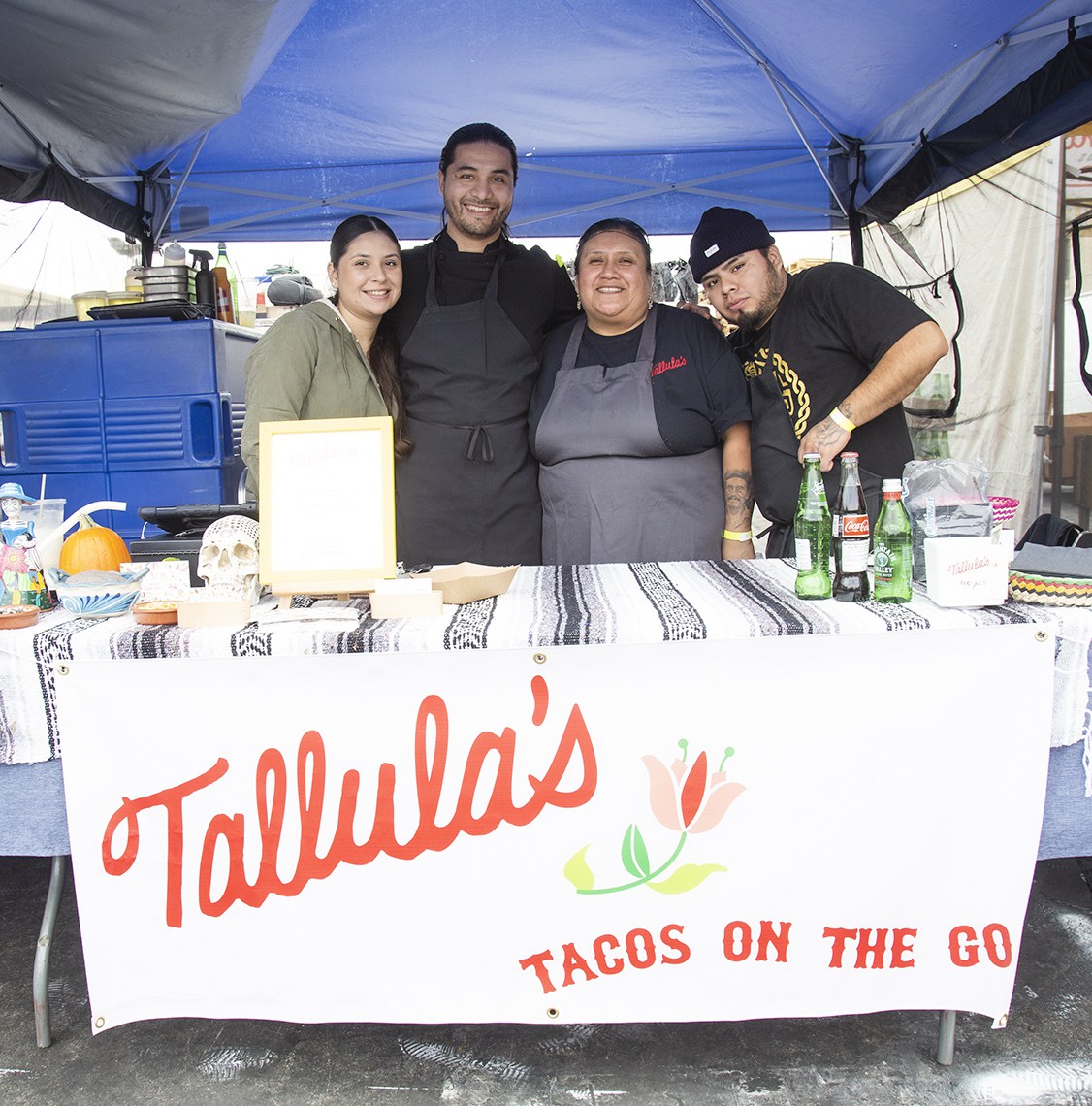 Tallula’s didn’t disappoint at all: soft, chewy, and was that a bit of clove in the masa? A truly extraordinary tortilla. Photo by Larry Hirshowitz.

Regardless of Disney metaphor, we both hit on what La Princesita did.

It was nowhere near as elaborate a flavor as Tallula’s. It didn’t have to be. We did have to discuss who would be the winner for a bit, but we eventually came to the consensus that La Princesita had scored the upset. Tallula’s, as delicious as it was, didn’t perfectly hit the corn nexus.

It was the first time a blue corn tortilla had not made it into the Golden Tortilla finale and the first machine-made tortilla to get this far and the first traditional tortilleria to make it. And La Princesita’s reward…would be having to face off against a previous champion in the finale. 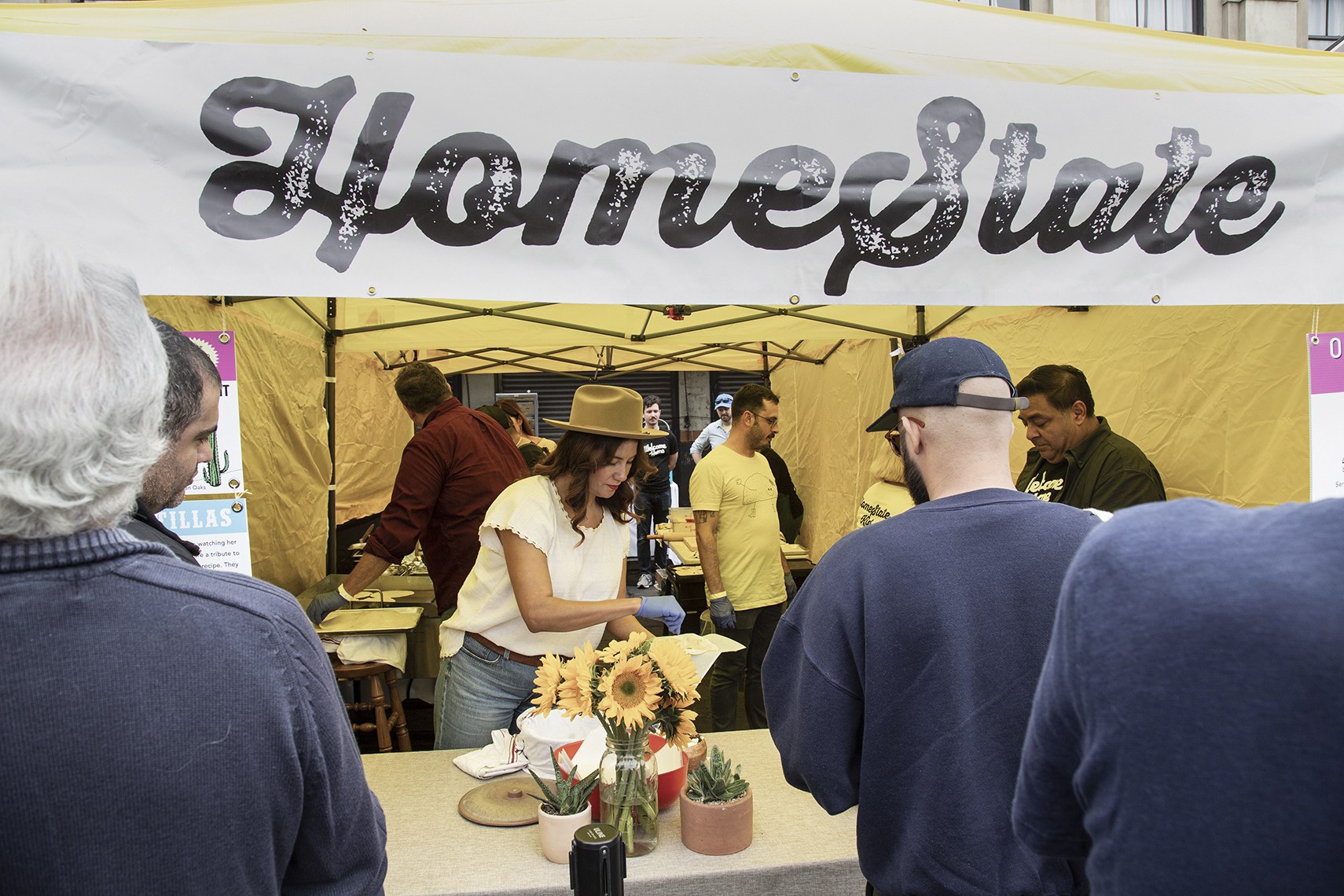 HomeState is an incredible mini-chain that keeps growing and growing, and takes its tortilla crafting about as serious as any restaurant out there. Photo by Larry Hirshowitz.

This was the category where almost everyone was biased one way or another for both. Profe Natalia said she frequently patronizes both of these (HomeState at home, Sonoratown when she’s at USC). Same with Mona. Evan goes to Sonoratown’s new Mid-City location since it’s just minutes away from her home. Connie’s mom is norteña, and I eat more flour than corn because I like quesadillas.

So, unsurprisingly, this matchup was hard.

Sonoratown won the coin toss and immediately impressed with their translucent, wheat-forward, tiny tortilla (I almost made the mistake of handing the judges the tortilla basket filled with HomeState while calling them Sonoratown before one of my KCRW jefas stopped me. “L.A. can’t afford another Latino scandal!” Profe Natalia joked, to the laughs of the audience). HomeState’s tortillas weren’t that much bigger, but far more filling. They were caked with flour powder — a delightful touch of taste that left my hands looking like those of an Olympic gymnast. Sonoratown and HomeState were both magnificent — but which would win?

We debated, and voted 2-2, with me casting the deciding vote. Sonoratown was simple, yet it didn’t need to be anything more because of its flour power. Its harina was superior to that of HomeState’s, whose butter-made tortilla was just a tad too rich and thus overwhelmed its own flour flavor.

HomeState is an incredible mini-chain that keeps growing and growing, and takes its tortilla crafting about as serious as any restaurant out there. But their cannon of an arm, so to speak, overthrew the receiver so that they had to dive to make the catch—but that meant the receiver fell to the ground, and a defender immediately tackled them and HomeState couldn’t go any further. Sonoratown, on the other hand, hit the receiver mid-stride on a midfield cross route and sprinted straight to the Golden Tortilla touchdown. 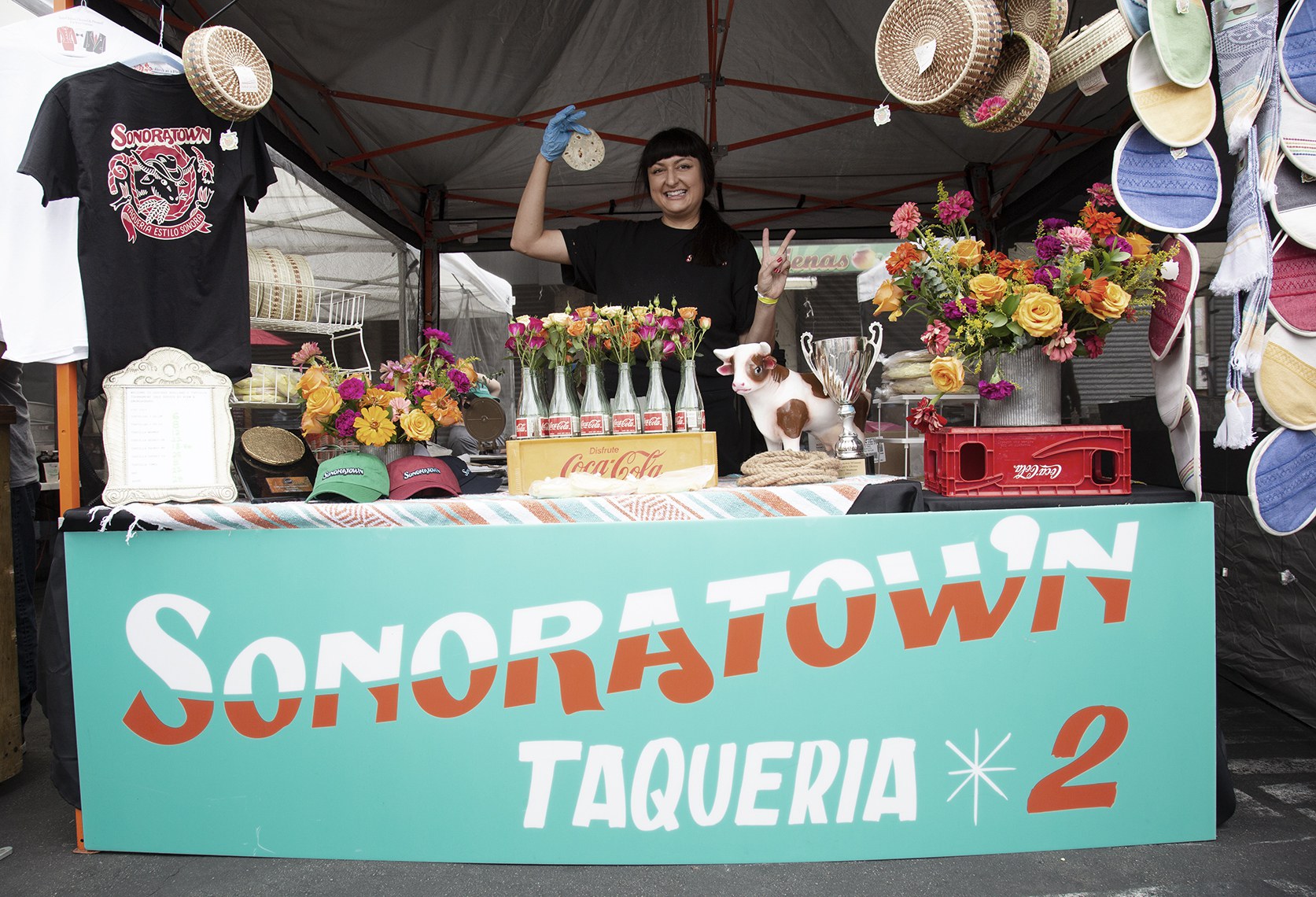 Sonoratown is just one of four tortillas (along with HomeState, Taco Maria, and Burritos La Palma) to make it into the Suave 16 every year of the #TortillaTournament. Photo by Larry Hirshowitz.

Sonoratown is just one of four tortillas (along with HomeState, Taco Maria, and Burritos La Palma) to make it into the Suave 16 every year of the #TortillaTournament. La Princesita was a #1 seed in our inaugural contest, but got knocked out in the ¡Eso 8! In 2018, lost in the second round in 2019, and thus missed the tournament altogether in 2020 (only Suave 16 winners return to the next #tortillatournament).

The only reason La Princesita came back last year was because I declared a Tortilla Tournament of Champions — we invited the best of the best from previous editions in an effort to stand by as many winners as possible to bounce back from the COVID-19 pandemic (we’re going to do that every four years, like an Olympiad). La Princesita made the most of its second chance; they lost in the ¡Eso 8! last year to Tallula’s.

Before we got to it, I brought on stage the Chiquihuite Cup — a 3D-sculpted tortilla basket (aka a chiquihuite) upon a tower, on a base featuring plaques with the names of all previous #TortillaTournament winners. From now until the sun collapses on itself and engulfs the Earth in our fiery end, the winner of the #TortillaTournament will host the Chiquihuite Cup in its place of business until a new winner is crowned, at which point they will host the winner and on and on.

Simplicity was the theme of both winners, and they also shared something in common: La Princesita and Sonoratown are customers of VIVA, the Mexican-geared lard of Coast Packing Company, the Vernon-based family business that’s celebrating its 100th anniversary this year and just so happens to be a #TortillaTournament sponsor. I hammed it up with an empty VIVA box as we waited for Sonoratown and La Princesita (which uses VIVA in other products, not its corn tortillas) to bring us their freshest jewels.

Sonoratown went first and was again simply spectacular — but it couldn’t get past the nexus of tortilla brilliance that La Princesita managed to channel yesterday.

After the #TortillaTournament ended, I came home and made myself my favorite meal: quesadillas. I used my daily corn tortilla, Kernel of Truth, which my wife sells at her market-cafe. It’s a wonderful corn tortilla, and was a two-time Fuerte Four finalist — and it wasn’t in the competition this year, not because its quality has gone down but because others have upped their game more.

The judging didn’t take long, and was unanimous. There was only one.

Two of the Ramirez siblings who now run La Princesita came on stage to accept the Golden Tortilla and the Chiquihuite Cup. Monica Ramirez gave a special shoutout to their late father, Francisco Ramirez, who founded La Princesita and passed away nearly four years ago. The line for La Princesita got looong after that — and that was that. 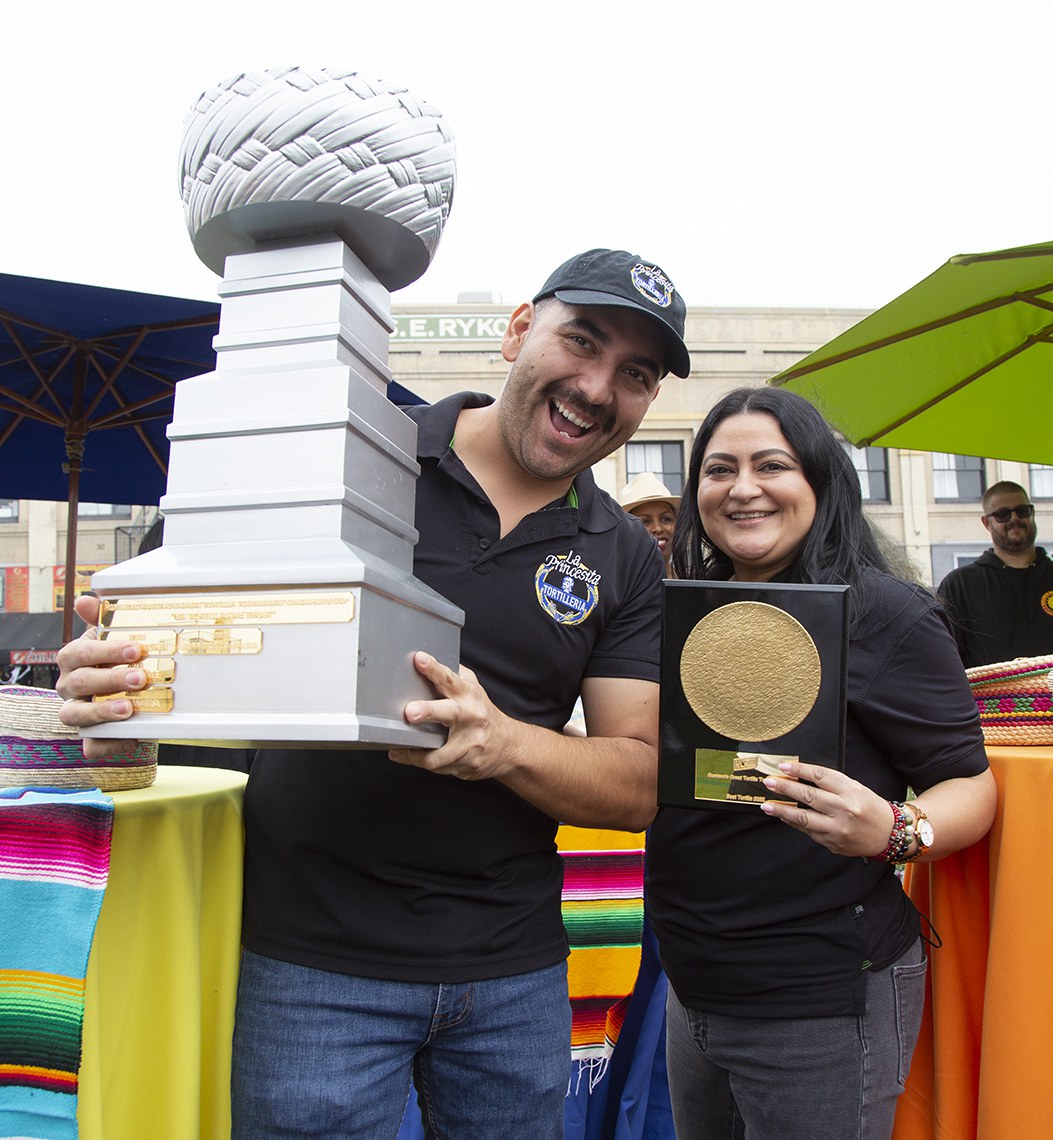 A special thanks to all of ustedes who went to our #TortillaTournament finale, who followed our many articles online, to all the KCRW jefas who made the finale possible (especially Krissy Barker, la mera mera), to all of our judges and especially our Fuerte Four finalists. My apologies to anyone I forgot, like Josh Kun (sorry again, profe!)

It’s been wonderful to see tortilla culture in Los Angeles better itself year after year — and next year will be the best one yet.

Got a tortilla I should check out, folks? Hit me up at mexicanwithglasses@gmail.com. Until then, ALL HAIL OUR NEW TORTILLA QUEEN, LA PRINCESITA!